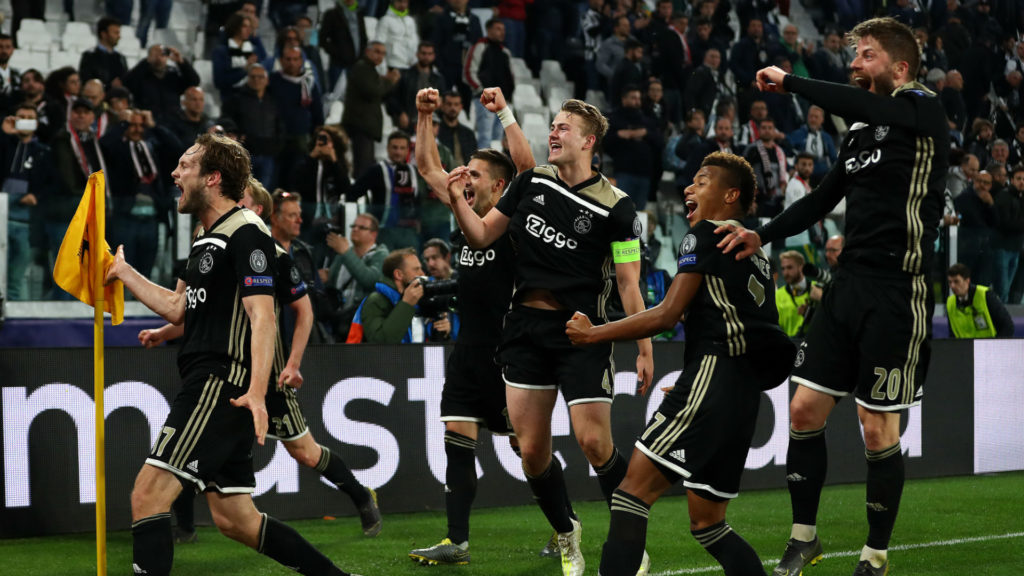 ZL: What do you make of Ajax’s form since the win vs Juventus?

JD: They had a very hard away game versus FC Groningen. Groningen played very compact which resulted in few chances for Ajax. But almost every team does have a hard time scoring against Groningen since they second half of the season. Against Vitesse they controlled the game from beginning to end with some good attacks from the half spaces.

Vitesse played way more defensive than they usually do, but they are no FC Groningen. In both games they didn’t reach the level of their CL form, but they did enough to get the 6 points.

ZL: Do you think the added motivation of the Eredivisie title race has depleted their energy or made them more focused in the CL?

JD: That’s really hard to answer. The Eredivisie title is a must this year. It’s unacceptable when a club like Ajax doesn’t win the domestic title, let alone 5 years drought in a row. But they look very fit, mentally and physical.

I think they are focussing on the next game, whether it is the CL, Eredivisie or the upcoming Cup final. Of course the energy gets depleted cause of all those games they play (Blind already got 60 official games this year). But with great results comes great new energy.

Ajax coach Erik Ten Hag monitors every player after a game and training with their medical and technical staff. And they do what is best for the player and team. If a player needs rest, he gives them rest.

ZL: How much of an impact has Ten Hag made on the team?

JD: A lot. He was criticized by most of the journalists. One of the biggest Dutch newspapers De Telegraaf was on a witch hunt towards Ten Hag. When he took over the whole club was in disharmony. He didn’t make a lot of changes in the second half of last season, because there wasn’t a lot of time.

In the summer he had more time (still not a lot of time cause of the World Cup and CL qualifiers) and he did get two pivotal signings in Tadic and Blind. His main accents were: De Jong as most important midfielder. He is the distributor of every attacking player. With his dribbling and body feints he buys time for the whole team.

Another major Ten Hag move was Ziyech on the right wing. On the wing, Ziyech gets all the freedom to free roam or cut inside. These two moves are the two key moves. And since the game against Bayern Munich, Tadic is the main striker. His linkup play is so underrated. It goes by the expense of Dolberg (and Huntelaar) but it opened up a place for Neres. And Neres did not disappoint.

They don’t go kamikaze press like they did when Bosz was the coach, but they still press very hard. That’s the good and the bad part. They regain a ball so easy, even at CL level. But sometimes there are big gaps in midfield and defense, leaving Ajax vulnerable in counterattack.

ZL: What have been the biggest criticisms of Ten Hag from the media?

JD: His accent when he speaks. That he doesn’t listen to his own players. That he gives the players to much freedom. But none of them are based on actual football facts. It’s just a hate campaign of a Dutch newspaper called De Telegraaf.

Ajax is a very difficult place to work if you don’t have the right “friends.”

ZL: Do you think that part of Ajax’s culture is dictated by who’s friends with legends like Overmars and Van der Sar?

JD: Ajax is a snake pit. I wouldn’t say that you have to be friends with Overmars and Van der Sar. But it helps when you do have some friends at the newspapers so they don’t burn you down. The best remedy are good results. Both Bosz and Ten Hag did silence their critics.

But Keizer was sacked because of a dispute between Bergkamp and Overmars. And Keizer was just collateral damage.

Of course the results weren’t good under Keizer (Ajax didn’t survive the CL and El qualifiers). But Keizer also did have the Nouri-case which had a very big impact on the club.

ZL: Do you worry that Carel Eiting could become another Nouri case (obviously to a lesser extent)?

JD: No, but I am not so sure anymore if he will succeed. Cause the level at Ajax went up by a lot this season. If Nouri was not permanent injured cause of brain damage I am 99% sure he would be a star in this Ajax. Eiting is talented, but no way near Nouri’s level.

ZL: Do you think that Ziyech, De Ligt and obviously Frenkie potentially leaving this summer has had any affect on their focus?

JD: Not at all. Frenkie de Jong did have some lousy games after he reached an agreement with Barcelona, but the last couple of weeks De Jong is pure class. De Ligt is rock solid the whole season, not one bit but affected by all the rumours. Ziyech surprised us this year by staying at Ajax, and a couple of days ago he didn’t rule out a extended stay. But in the end all three will leave if you ask me.

JD: I think it’s still to early for Van de Beek to leave, because he isn’t on the level with the players you named. But he is becoming more and more important for Ajax. His development increased a lot in 2019.

If you beat the press, that would be huge. But that’s a big if. The major weakness is the right fullback in defense (If Mazraoui starts) He is a very good player when Ajax does have possession, but he is still a liability in defense. And Ajax is prone to the counter attack although that’s more an exploit we see in the Eredivisie (Ajax-Heerenveen, first game of 2019)

So if Tottenham doesn’t press much and does not want to build up I think they would have the biggest chance to defeat Ajax.

If you try to build up, it’s easy for Ajax to press up high on the field and regain possession in a dangerous part on the field. If you press hard you either get outplayed or left behind with an empty gas tank in the second half.

ZL: With Son and Kane out, do you think Ajax are favorites?

JD: No. Spurs still does have proven talent like Alli, Eriksen and Alderweireld. They are used to high intensity games, more than Ajax.

But we are not big underdogs like we were against Real Madrid and Juventus. I think it would be 60% Spurs – 40% Ajax.

ZL: Since Son will be suspended for the first match, do you think Pochettino will go for a defensive approach?

JD: I think it would be wise for him to go for a defensive approach and gamble on a speedy attacker like Lucas Moura. But Ajax does score quite a lot in CL away games this year. So a clean sheet will be a key factor for Tottenham.

ZL: How do you expect Ten Hag to target Spurs’ weak spots?

JD: I think Ajax will play Tadic as a striker but allow him to drop back. So he will create room for the likes of Ziyech, Neres and Van de Beek. They will do this so fluid that Spurs must decide what they will do: zonal or man-marking.

I also think they want to target the fullbacks of Spurs. That’s their weak point. Ajax will not really overload the flanks, but they will push their own fullbacks up high so our wingers can occupy the half-spaces.