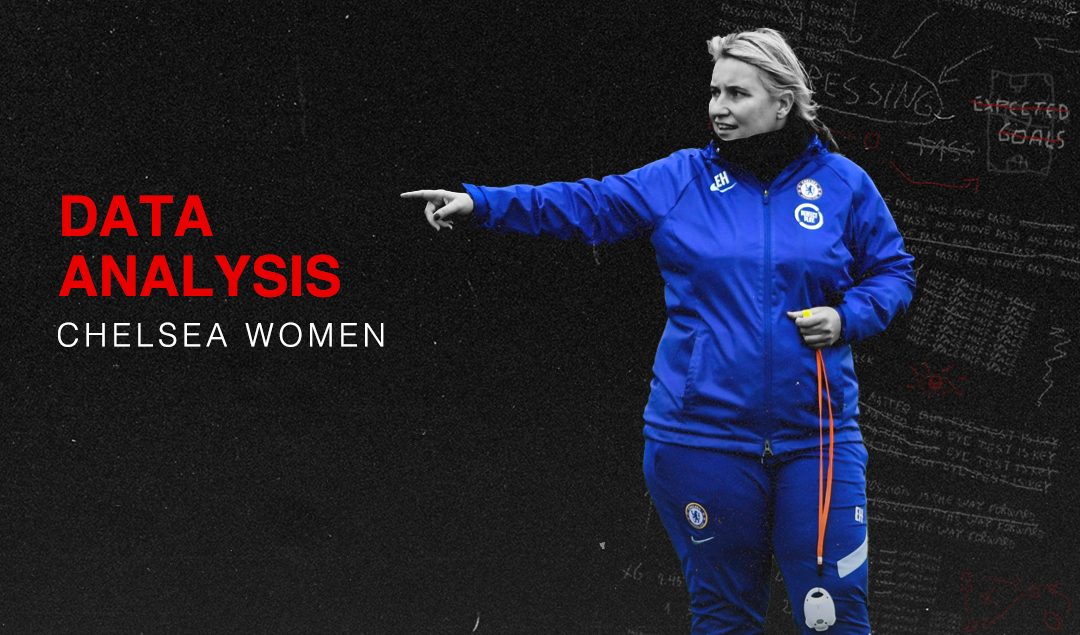 There aren’t many teams in this world who have the grit and courage to rise back up from continuous setbacks. The innate willpower of these teams is unparalleled and the strength they possess, unmatched.  When Emma Hayes took over the Chelsea women’s team in 2012, she inherited a side that seemed to be massively disjointed – both on and off the pitch.

The club rules strictly prevented them from interacting with the men’s team, unless the men initiated a conversation. The financial backing from the board was next to none and the overall atmosphere around the club was rather negative. But Hayes wasn’t one to give up. Patiently, piece by piece, she started building the Chelsea puzzle.

The team came agonizingly close to winning in the WSL in 2014, only to lose out on the title on the final day. They also reached the semi-final stage of both the FA and Continental Cups, falling short on both occasions to the eventual winners. However, there were tons of positives to take from that season, especially their first-ever qualification to the UEFA Women’s Champions League. It was during this time that things started to take a turn for the better.

In 2015, a lot of the Chelsea players announced that they were turning into full professionals. This was paramount as it boosted the already restored confidence surrounding the club. And the impact was instant. Chelsea lifted the FA Cup in August that year, beating Notts County Ladies in the final, courtesy of a single goal scored by Ji So-Yeon. In October, they secured the WSL title – thus completing the celebrated “double.” They repeated this same feat two seasons later. All this hard work and effort put in by Hayes and her team was deservedly recognized and the club was rebranded as Chelsea Women FC in 2018.

Since then, the team have been nothing short of exceptional. With immense quality all over the pitch, Chelsea have shown time and time again why they are always the team to beat when it comes to the WSL. In 2019/20, they remained unbeaten throughout the season, scoring 47 goals and conceding just 11 in 15 games. They finished with 12 wins and three draws, amassing a total of 39 points.

Due to the league being called off due to coronavirus, they were crowned champions on the basis of their Points Per Game (PPG) of 2.60; Manchester City finishing second with a PPG of 2.50. Chelsea also ended up winning the FAWSL League Cup, overcoming a valiant Arsenal team in the final. Fittingly, Emma Hayes was lavishly awarded with different Manager of the Year accolades while star striker Bethany England was named the PFA Women’s Player of the Year for her 21 goals and six assists across all competitions.

Even this season, Chelsea have come out all guns blazing. They have scored the second-highest number of goals in the league (28) and have conceded the least (5). They currently sit second in the table, three points behind leaders Manchester United but having played a game less. It’s poised beautifully because the two face each other next. 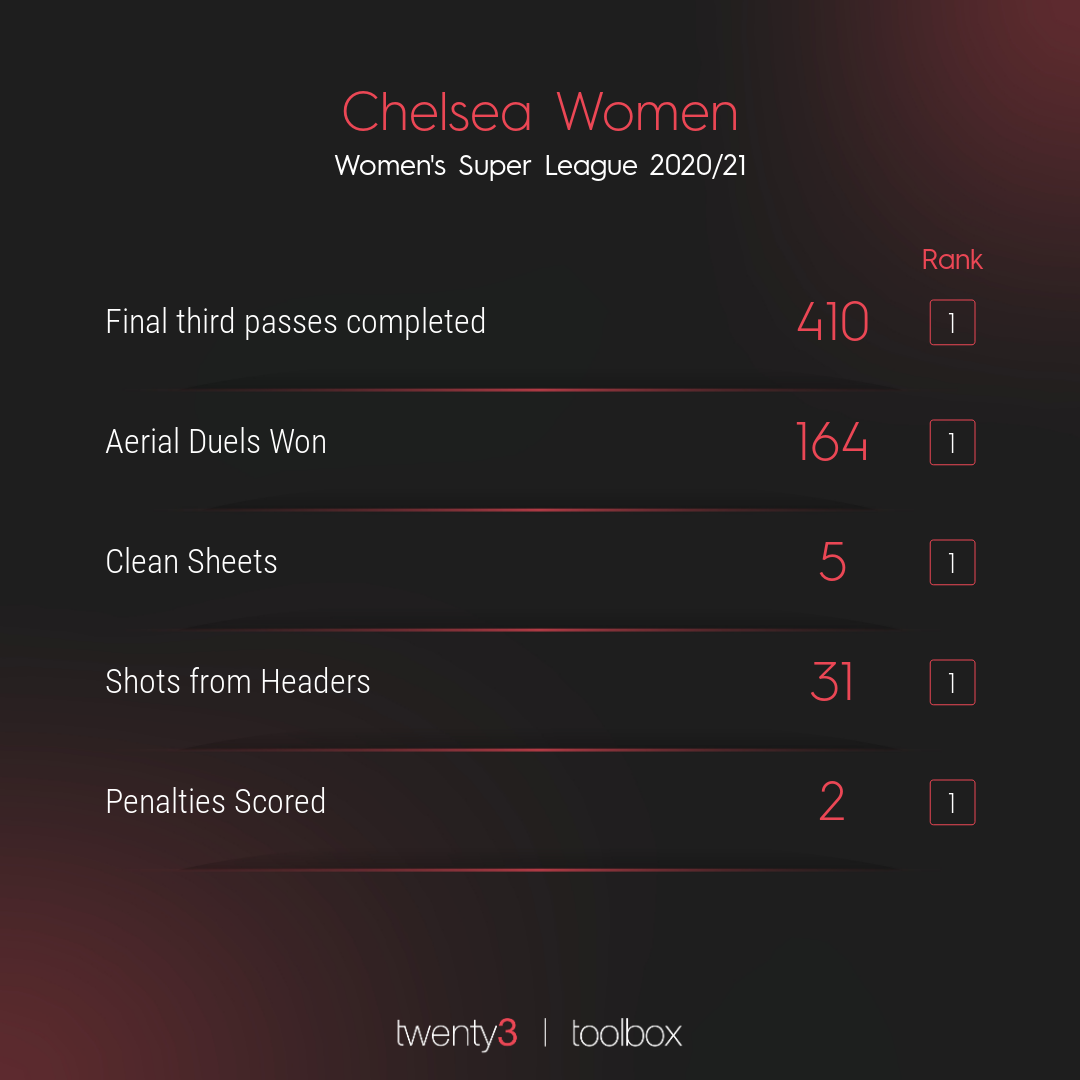 Formation and Style of Play

Backed by years of practice and tactical learning, Emma Hayes has got her players to adapt to different formations as required by the circumstances. However, the Chelsea women’s team have a solid 2-formation system in place. They line up in a 4-2-3-1 formation which can very flexibly change into a 4-4-2 when needed. Usually, when the Blues have the ball and are attacking, they tend to take up the 4-2-3-1 shape.

Out of possession, the wingers quickly drop beside the double pivot created by the central defensive midfielders, while the attacking midfielder and the striker drop to form a 2-woman attack – hence, taking the 4-4-2 shape. In the picture below, it’s interesting to note that the AM stays higher than the FW on average. This provides evidence of the versatility of the players playing up front. Be it Pernille Harder, Ji So-Yeon, Bethany England or Sam Kerr; all of them star when given multiple roles to perform. 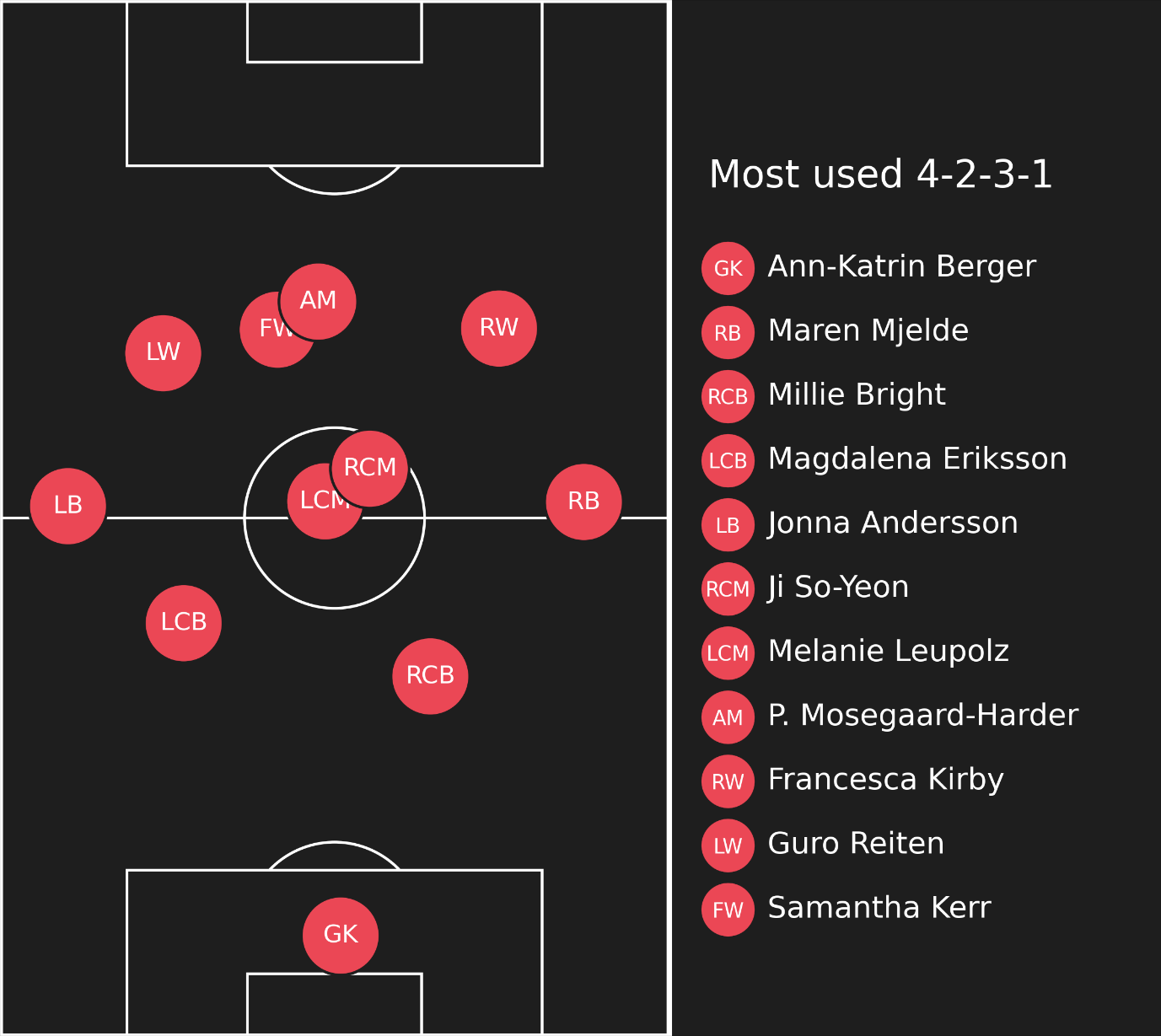 Because Chelsea have such talented players all over the pitch, it becomes easy for them to adopt a possession-based style of football. Passing the ball around, looking for space in behind as well as in the half-spaces – they patiently build up waiting to pounce at the right moment. They also tend to prefer the left side of the field when attacking. Owing to the left fullback staying much higher than her right counterpart and lots of off-the-ball movement on the left, it becomes easier for Chelsea to attack from the left. 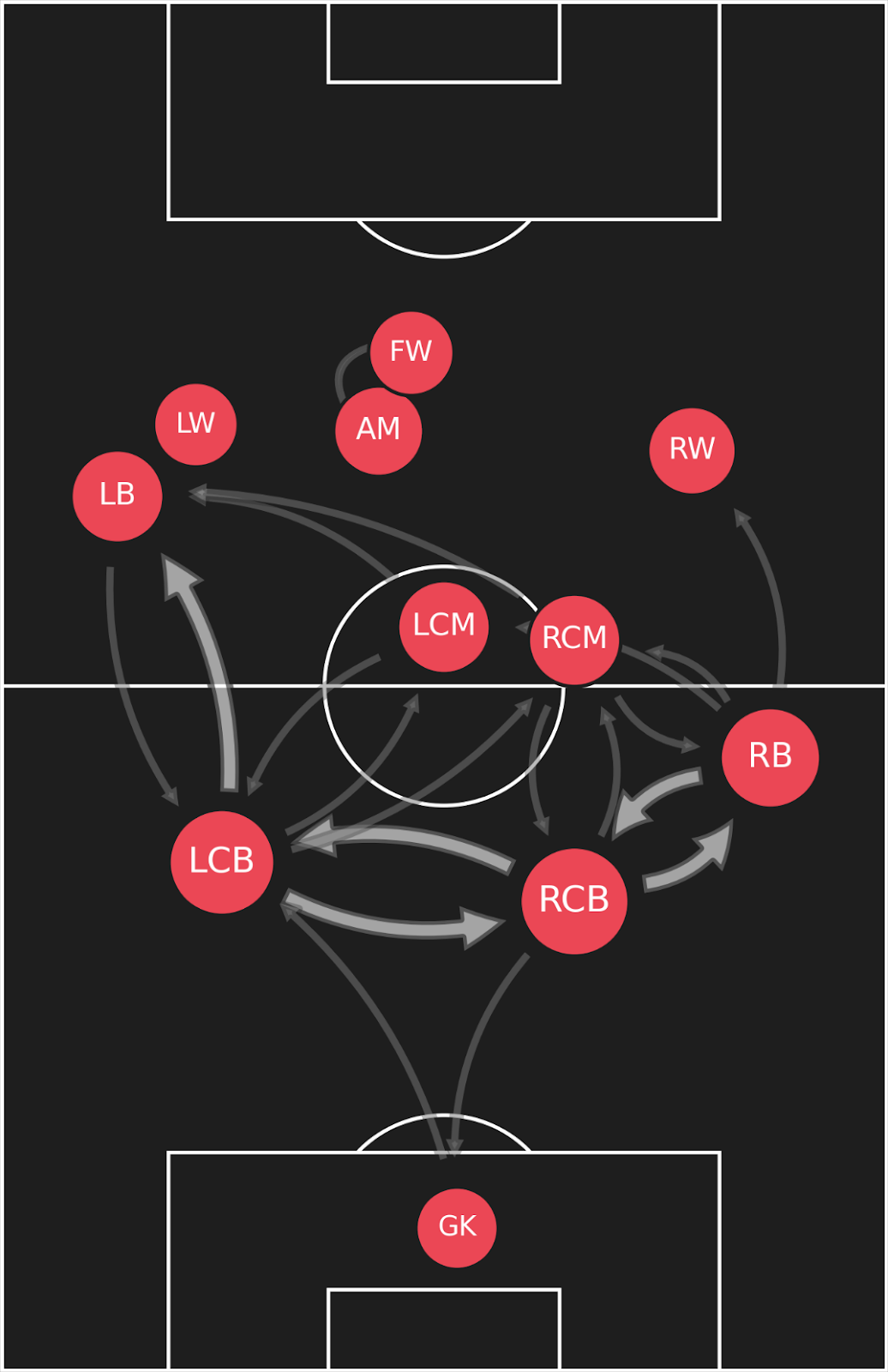 Chelsea Women take up the 4-4-2 when their opponents have possession of the ball. They form two solid lines of four, covered further up by the striker-attacking midfielder duo. The wingers play a crucial role here as they are expected to make the effort to drop deeper alongside the holding midfielders in order to provide for more defensive stability.

However, the 4-4-2 also helps them press the opposition and they do that very effectively. Against a back four, the front two aggressively press the two center-backs using diagonals runs so as to also cut off passing options out wide to the fullbacks. Very rarely, against the back three, we might see one of the holding midfielders join in the press to limit the third center-back.

When they are not pressing, Hayes’ team opt for a woman-marking tactic, forcing passes around the backline because there are no safer forward passes available. This also allows Chelsea the time to equalize the numbers in midfield so that they don’t get overwhelmed in the middle of the pitch.

It’s important that the holding midfielders be disciplined and narrow so that there is negligible space in between and in behind the lines. Otherwise, the center-backs will get easily exposed, which can put them in danger of conceding. They should also be composed on the ball, being able to play precise passing all around. Ji So-Yeon and Melanie Leupolz have been at the foundation of Chelsea’s midfield this season, with Sophie Ingle tucking in whenever Ji players further forward. 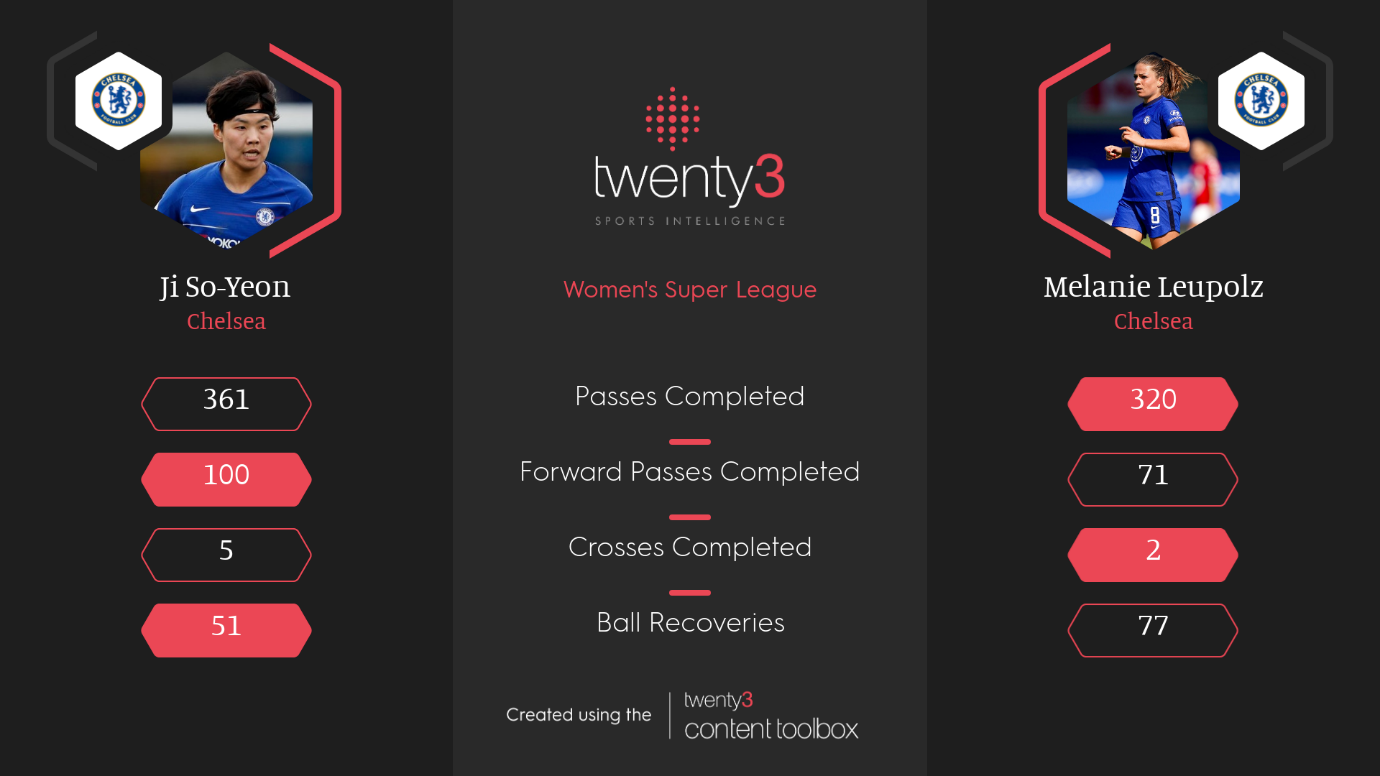 If you want to be champions, you have to be different and better. There are certain aspects of the game where the Blues remain unmatched. That’s what makes them arguably the best side in the WSL.

Naturally, we expect the attacking midfielder to stay up the pitch, press, and create chances. However, in Hayes’ system, the attacking midfielder also has a massive defensive role. Tracking back during counter-attacks and covering in the centre of the park is a vital role played by whoever plays there, be it Harder or Ji.  Their sideways movement during the press also helps cut off passing lanes for the opposition.

On occasion, the attacking midfielder also slots in as a second striker. Although this relieves them of defensive duties, it becomes crucial for them to support the forward up ahead. Pernille Harder has been seen to perform this role several times. She drops into the space created by the runs of the main striker, receives the ball, and can look up to pick out either a pass wide or inside. 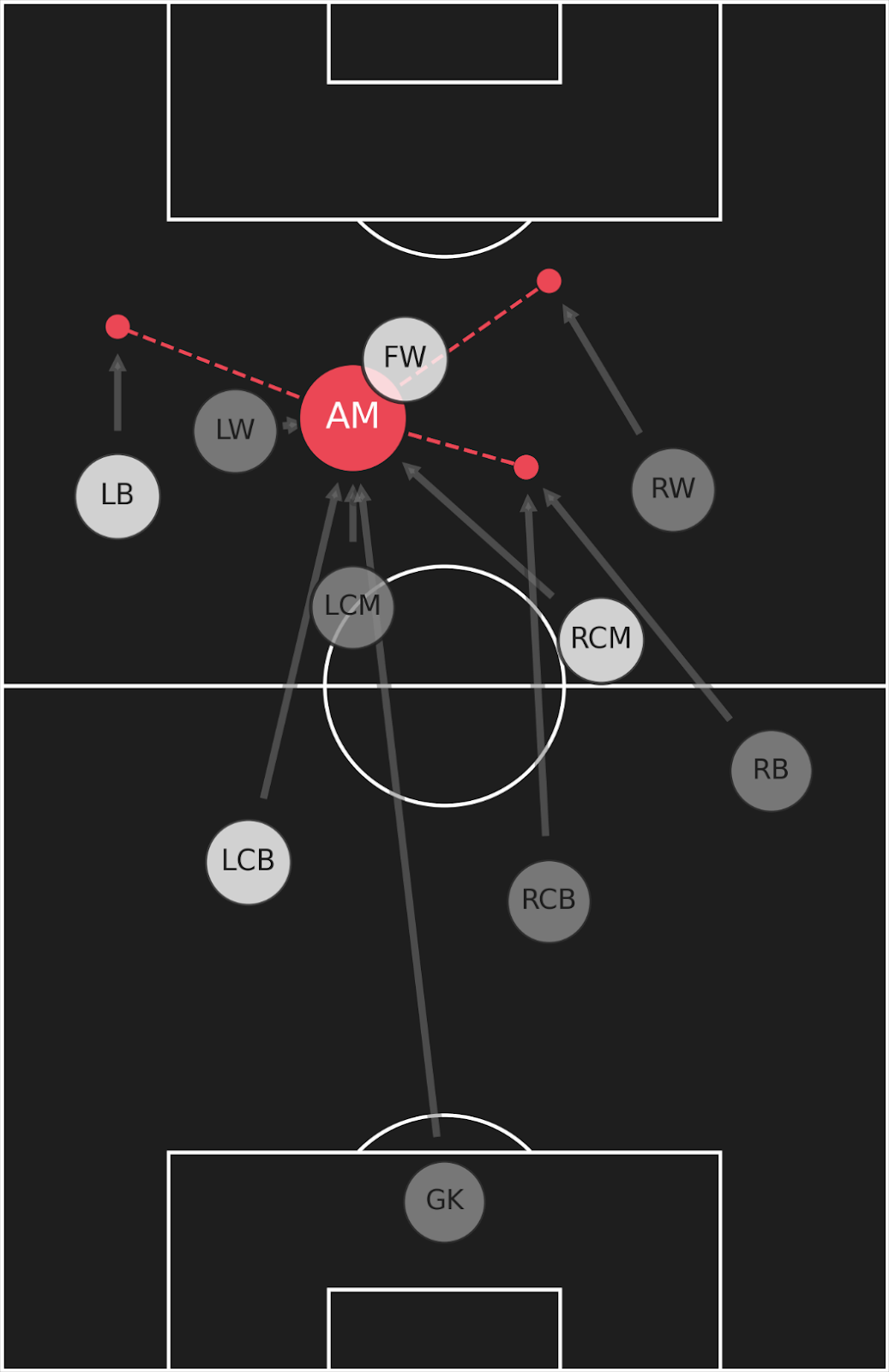 Another fascinating facet of the system is the “Double Pivot.” As discussed above, there are two holding midfielders who protect the backline while simultaneously linking defence to attack. However, sometimes they also slot into the fullback positions or the passing lanes in and around that area.

This usually happens when the fullbacks are high and there is a counter-attacking threat. One of the holding midfielders moves into that position while the other comes inside to cover the middle. This helps Chelsea gain more numbers in defence, hence neutralizing the counter.

It’s a top of the table clash come Sunday and if Chelsea were to take all three points, they might well be on track for another celebrated WSL title.