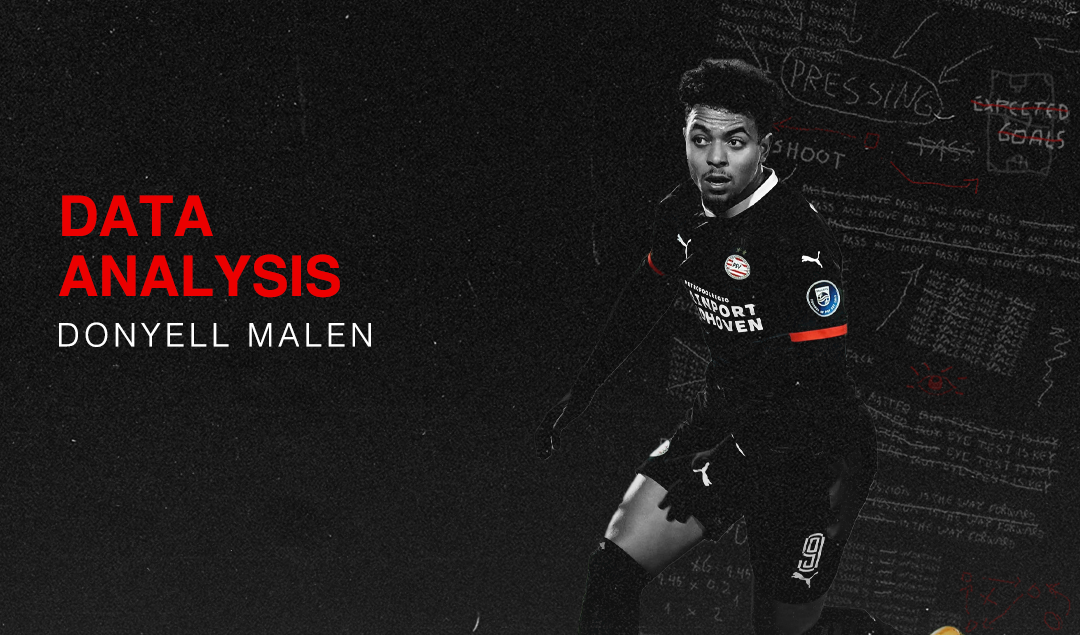 After last season’s disappointing fourth-place finish, PSV Eindhoven are back in the race for the Eredivisie title, currently sitting four points behind league leaders Ajax. Roger Schmidt’s side have mounted a serious title challenge on the back of a treasure trove of youngsters, including Mohamed Ihattaren (18), Ibrahim Sangaré (23), and Noni Madueke (18), but perhaps none have been more consequential than 22-year-old forward Donyell Malen.

Born in Wieringen, Hollands Kroon to a Dutch mother and a Surinamese father, Malen began his development at amateur sides VV Succes and HVV Hollandia before joining Ajax’s academy in 2007. Malen remained in Amsterdam for eight years before heading for Arsenal, where he would follow the footsteps of the footballing heroes he emulated as a child such as Dennis Bergkamp and Thierry Henry. However, he would last just two years in London before heading back to his homeland and joining PSV for a fee of €600,000.

While he mainly played in the reserves during his first season in Eindhoven, his fortunes changed when Mark van Bommel replaced Phillip Cocu as manager in the summer of 2018. Playing across the attack, Malen provided 10 goals and 5 assists in 31 Eredivisie appearances as PSV narrowly lost the league title to Erik Ten Hag’s Ajax. He did himself one better the following year, registering 17 goals and 9 assists in 25 appearances in all competitions prior to the COVID-19 lockdown.

He’s picked up where he left off last season, providing 17 goals and 7 assists in 28 appearances for PSV. Whilst he was mainly used on either wing during the 2018/19 season, Malen has blossomed into a promising center forward in Schmidt’s 4-2-2-2. He is a quick, technically proficient modern attacker who is not too dependent on others to create chances in the final third and who is comfortable using either foot to score goals.

One thing that makes Malen stand out against Eredivisie defenses is his speed. Although he is naturally a striker, his speed enables him to play on either flank, as he can easily win a 1v1 duel and arrive into the right goalscoring position. In that regard, he is similar to Memphis Depay, another Dutch forward who came into his own at PSV Eindhoven, who arguably made the move to England too soon, and who can play across the attack due to his unique skillset.

Despite his versatility, Malen’s strongest position is at center forward. While he is far from being a traditional target man at 5’10” and 168 lbs, his link-up play is impressive and his pace allows him to exploit open space and latch onto long balls from teammates. Although he plays with another center forward — typically Eran Zahavi — he tends to move to the left flank to receive and dribble.

In the heat map above, we can see that he likes to play close to the box but also loves to wander around the left flank. He either tries to pass the ball to the overlapping full-back on the left (typically Philipp Max) or cuts inside and shoots on goal – occasionally while making a run closer to goal.

His spatial awareness is part of what makes him so special; he knows when to run into the flank and when to cut inside. Malen knows when the through ball is coming from his teammates and when to lure defenders to his side in order to create space for other attacking players, as seen in PSV’s 2-2 draw against Ajax on January 10.

As Olivier Boscagli drives forward from defense into the middle third of the pitch to find a passing option, Malen makes himself free near the edge of the box. He spots the ample space between Daley Blind and Nicolás Tagliafico, recognizes the path of the incoming pass, and does well to control Boscagli’s heavy pass.

Not only does he control the ball and prevent it from bouncing out of his reach, but he attacks open space and in doing so, creates space for Zahavi to exploit between Blind and his center back partner Perr Schuurs. Rather than simply control it, though, Malen flicks the ball with his backheel into the path of Zahavi, who fires the ball past André Onana to open the scoring in the second minute of the match. 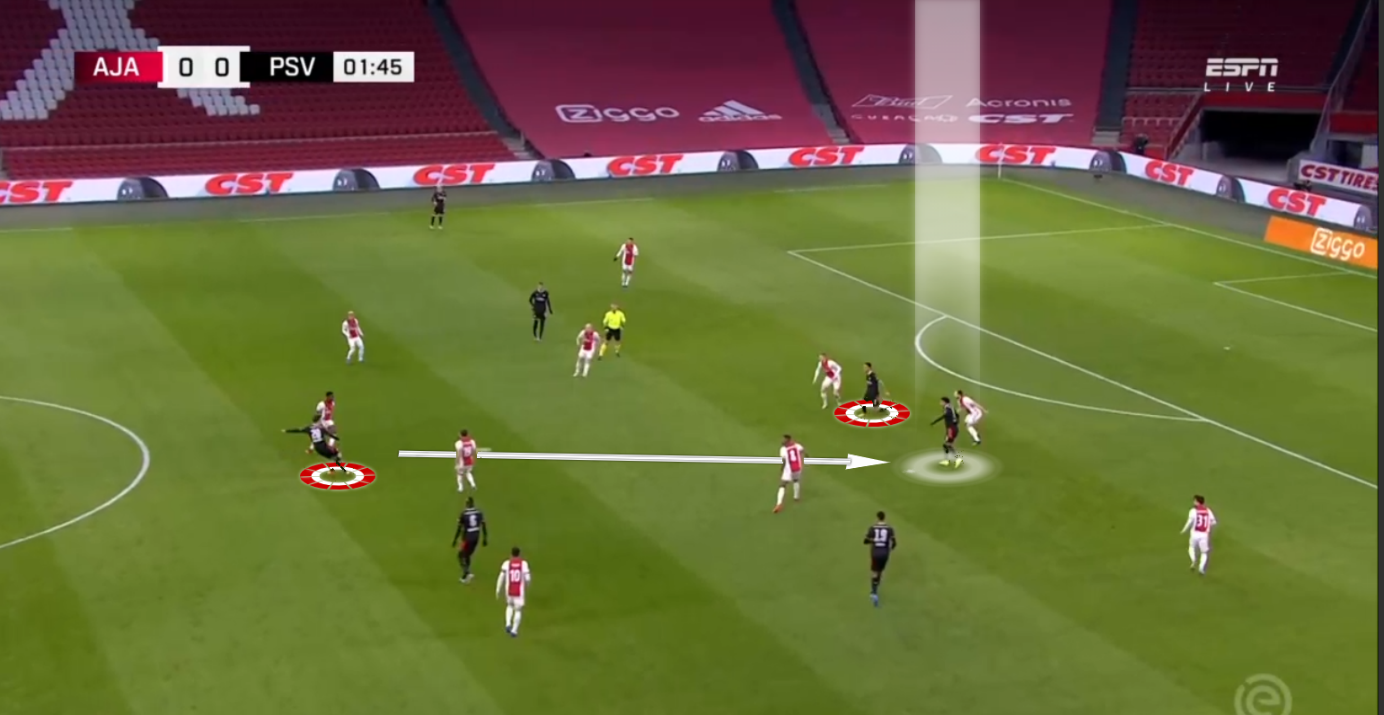 PSV doubled their lead in the 21st minute, with the away side breaking on the counter and pulling apart Ajax’s defense, as Malen provided the assist for the Israeli forward’s second goal. However, Ajax halved the margin prior to halftime with a goal from Quincy Promes and would go on to secure a draw in Amsterdam, with new signing Sébastien Haller setting up Antony’s equalizing goal.

Malen has continued to impress at the Philips Stadion, scoring a brace and providing an assist in PSV’s 5-3 victory over Sparta Rotterdam on January 16, and he’ll be looking to get on the score sheet again on Sunday when PSV face off against Feyenoord at De Kuip in a decisive match that pits second against fifth.

The below diagram visualizes each of Malen’s shots in the ongoing Eredivisie campaign. Whilst a reasonable amount of his shots come from outside the box, the majority of his shots and goals come from within the box. He not only converts chances with a high scoring probability but also manages to score goals with a lesser probability.

When we look closer to the numbers, we see that Malen has an average of 3.31 shots per game, of which 50% go on target with an expected goals (xG) amount of 0.62, although he slightly underperforms his xG with 0.6 goals per game. On the other hand, he overperforms his expected assists (xA) of 0.1 per 90 with actual assists of 0.27 assists per 90. In total, that makes for an impressive G+A per 90 of 0.87 in the Eredivisie this season.

At 22 years of age, Donyell Malen is continuing to prove just why he is one of the hottest prospects in not just Holland — but Europe as well. His performances have reportedly attracted attention from Juventus, Milan, and Borussia Dortmund, who could bring him to Germany as a replacement for Jadon Sancho, and it’s only a matter of time before he becomes the next Mino Raiola client to take the leap to a European giant.