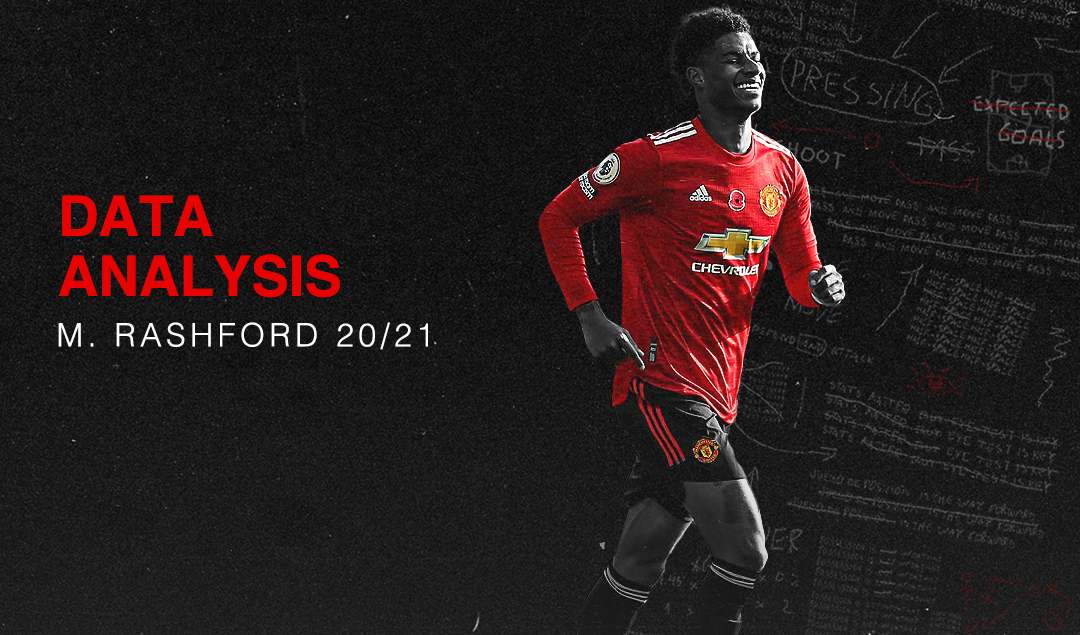 It would be an understatement to merely say that Marcus Rashford has “been in” the headlines in recent months. Rather, his off-the-field work, helping 3 million impoverished children gain access to free school meals, has seen him headline the front page of multiple newspapers, on multiple occasions- quite the achievement for a footballer.

In fact, his exploits even saw him make the front page of Vogue, who titled him (and Adwoa Aboah) as “The Faces of Hope”. It is a rather ironic title, because Manchester United’s indifferent start to the season has seen them in need of a few faces of hope.

Excluding Bruno Fernandes, nobody has performed at their maximum level, consistently. In Rashford’s case, this is not for the want of trying; his effort, fitness levels and mentality have been exemplary. 10 goals and four assists in 18 games in all competitions, while being joint Champions League top goal-scorer (with six), is more than adequate. But with United falling short in various games and competitions, we can always analyse and suggest what is working well and where improvements can be made.

There is obviously less room for improvement in Rashford’s performance than others at United, but with Rashford being United’s nominal left winger, and 45% of their play coming down the left flank, it is integral that everything works like clockwork on that side of the pitch if United are to perform well.

This burden of attacking responsibility isn’t solely on Marcus Rashford however; his relationship with the left sided fullback must be explored to add context to United’s performance on the left. Both Alex Telles and Luke Shaw share the minutes down this side. A simple comparison of the fullbacks from an attacking perspective can contextualise both player’s abilities and performance this season. 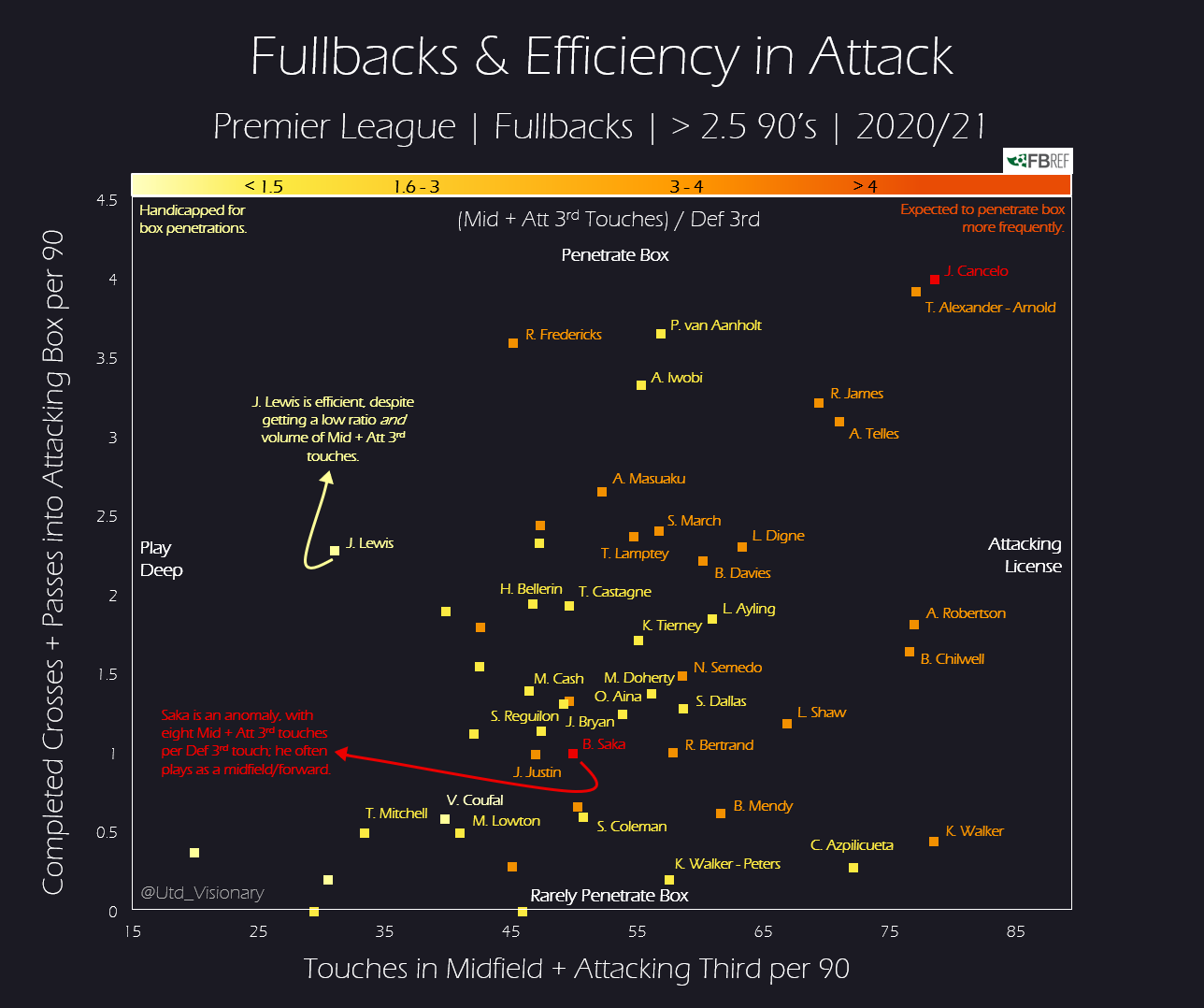 Telles has clearly had a more significant attacking impact than  Shaw, with 3.1 successful crosses and passes into the box per 90; compared to Shaw’s 1.3 per 90. In order to contextualise these statistics, which weigh heavily in the Brazilian’s favour, we can analyse a number of things: 1) pass maps in order to see where these attacking contributions come from 2) distribution sonars 3) action maps 4) performance analysis & in-game roles.

The relationship shared between Rashford and either fullback can be examined using the pass maps below. It is evident that Telles attempts more progressive/longer passes than Luke Shaw, particularly in the attacking third. The red box highlights the half-space and wide space in this zone; Telles attempts completes nine passes into the box from this zone; Shaw only five.

The knock-on effect, one would assume, is Rashford having less onus to create alongside Telles. Rashford’s expected assists (xA) is only 0.15 per 90 alongside Telles, however alongside Shaw he seeks to create more, with an xA of 0.30 per 90. While the sample size is small for these statistics, there does appear to be a trend forming; Rashford has to compensate for Shaw from a creativity perspective.

We can hypothesise that Rashford will accumulate higher expected goals per 90 alongside Telles, as he can roam into goal-scoring areas more frequently, while Telles holds width and creates from the left. 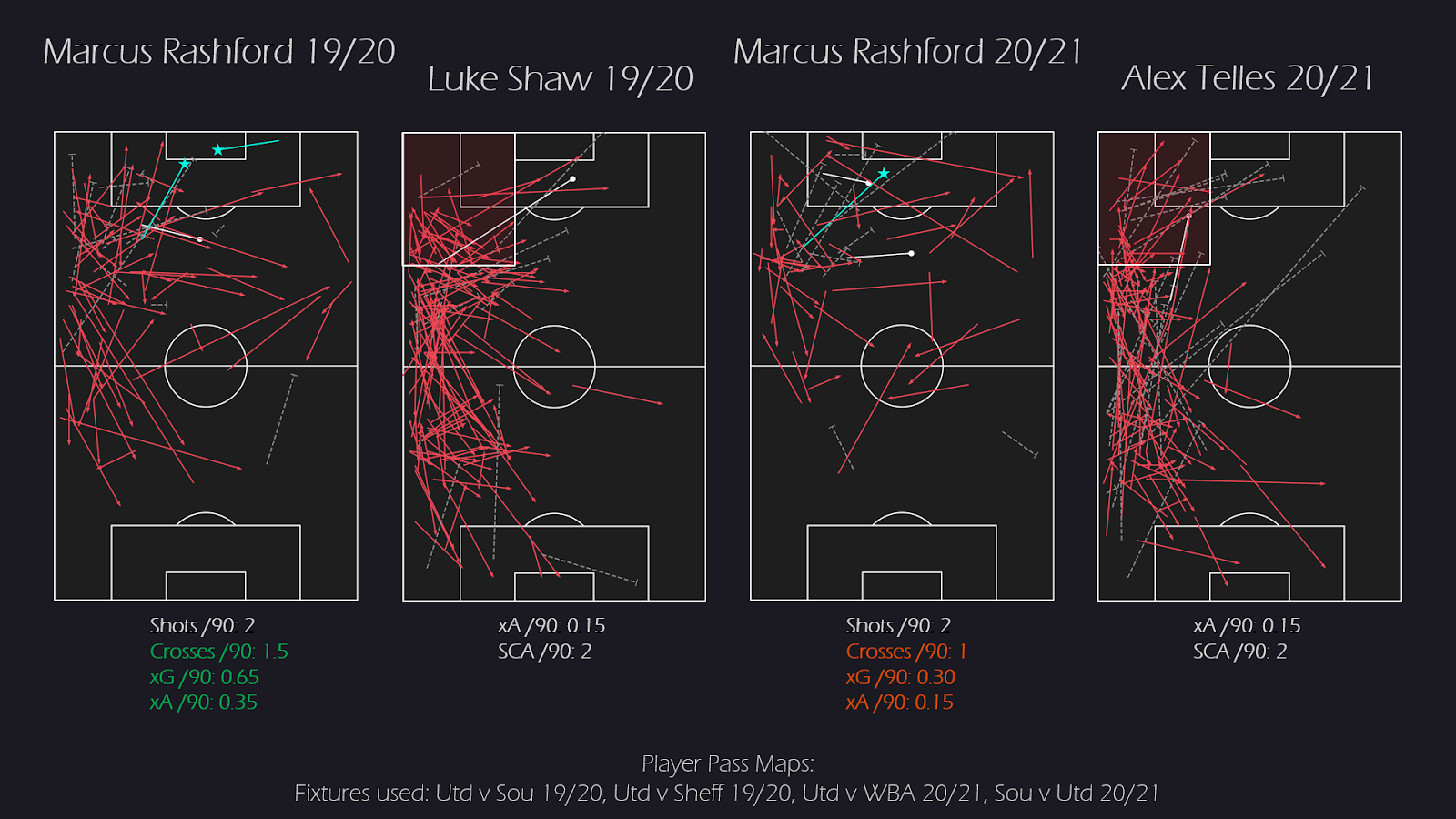 Team pass maps from the games analysed above should provide greater context to the Rashford-Shaw and Rashford-Telles relationships on the left. Rashford-Telles, and its more potent creative output, appears to allow the striker (Anthony Martial or Edinson Cavani) to remain more central, rather than peeling wide to combine on the left.

Not only does Telles’s presence benefit Rashford and his goalscoring chances, but it also allows the striker to remain in better positions to receive chances and/or score. 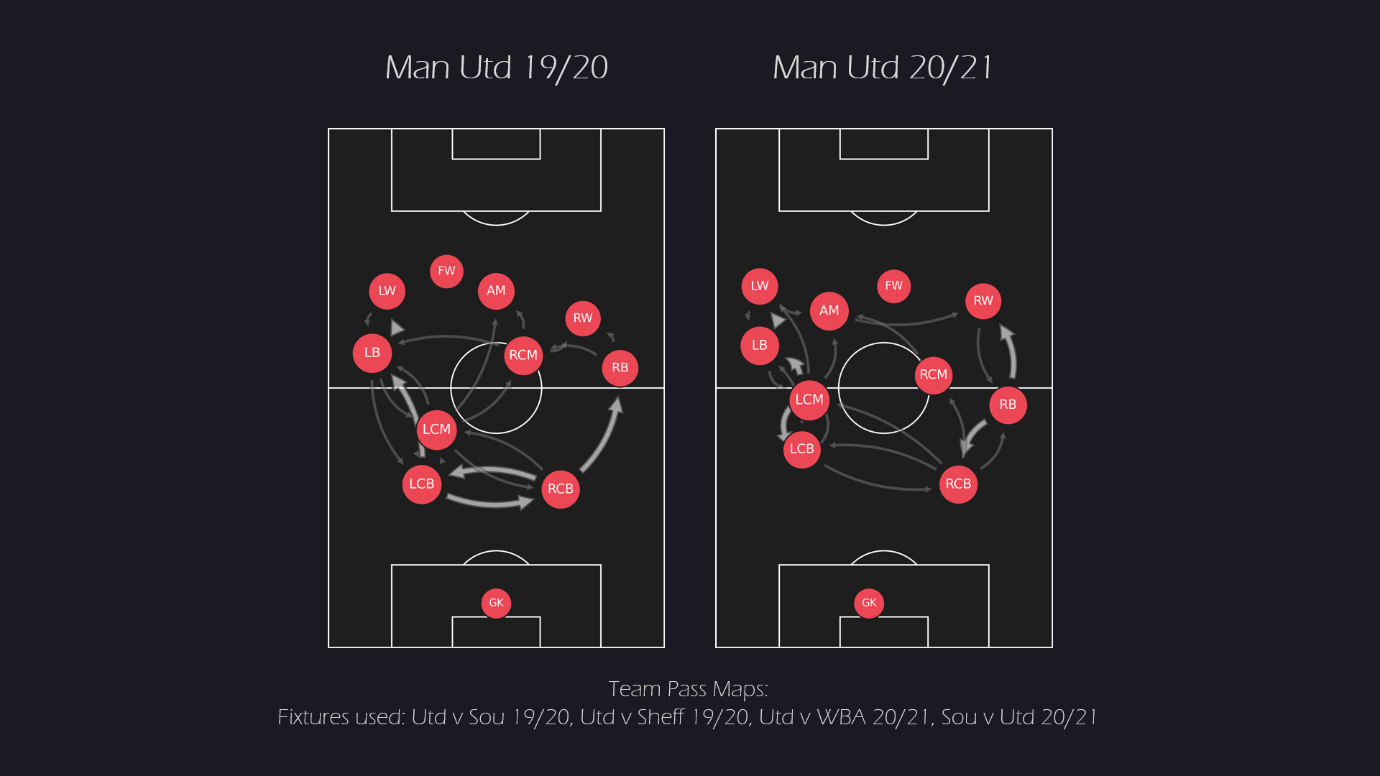 Distribution sonars allow us to grasp in which direction a player distributes the ball and how frequently. From the one below, it is clear to see that Telles is a more progressive option than Shaw; at least by design. Alongside Telles, Rashford appears to play more laterally, distributing inside more often rather than aiming towards the box/striker.

This is conducive of Rashford combining to get closer to goal, rather than merely creating off the left. In other words, Rashford’s distribution alongside Telles appears that of a wide forward, rather than a wide creator. 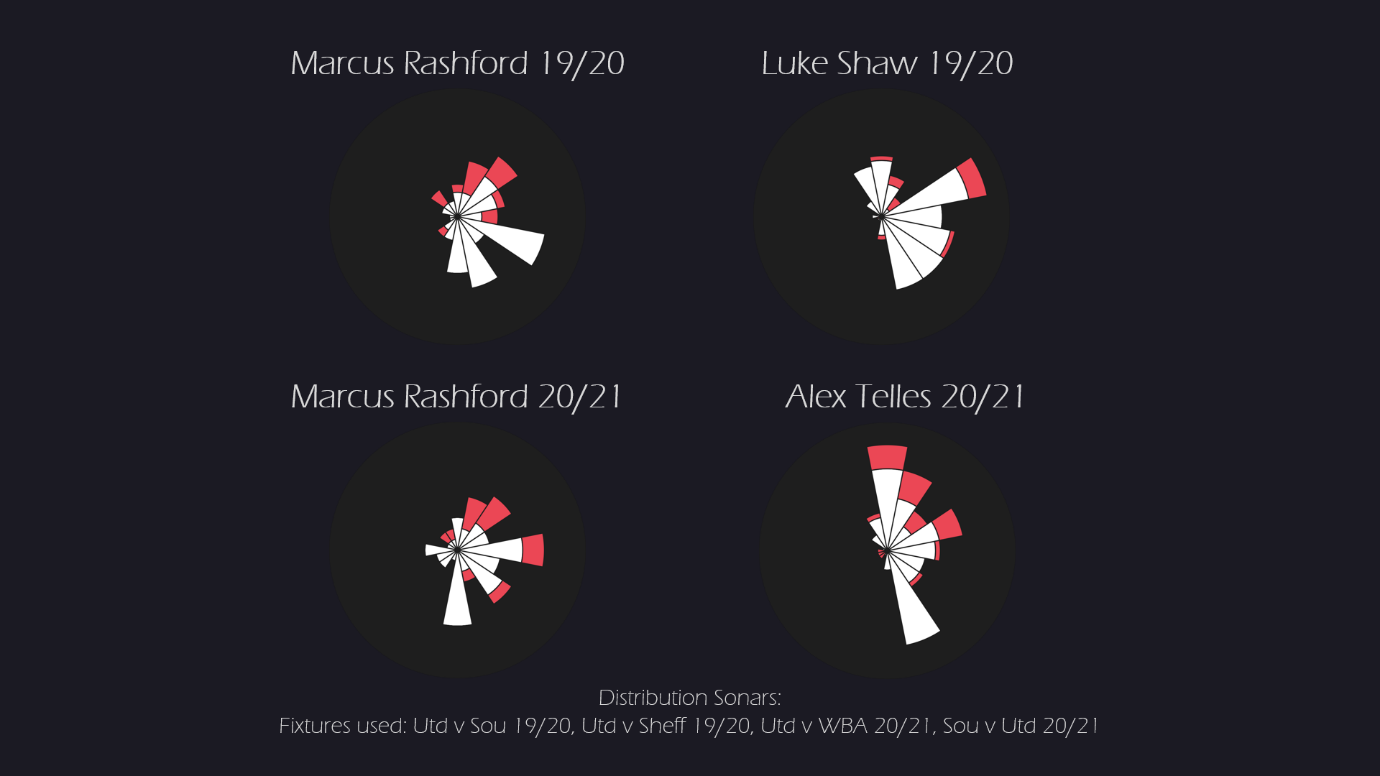 Additionally, action maps can help consolidate the suggestions made above. Rashford and Telles appear to have a healthy inverted winger – overlapping fullback relationship; Rashford is free to cut-in, combine and get closer to the box, while Telles holds width.

The fact that Telles is a threat off the left also means defenders are more likely to stay tighter to him (than say a less threatening fullback), which is an additional benefit to United attacking-wise, as the opposition defence is more likely to be stretched laterally. 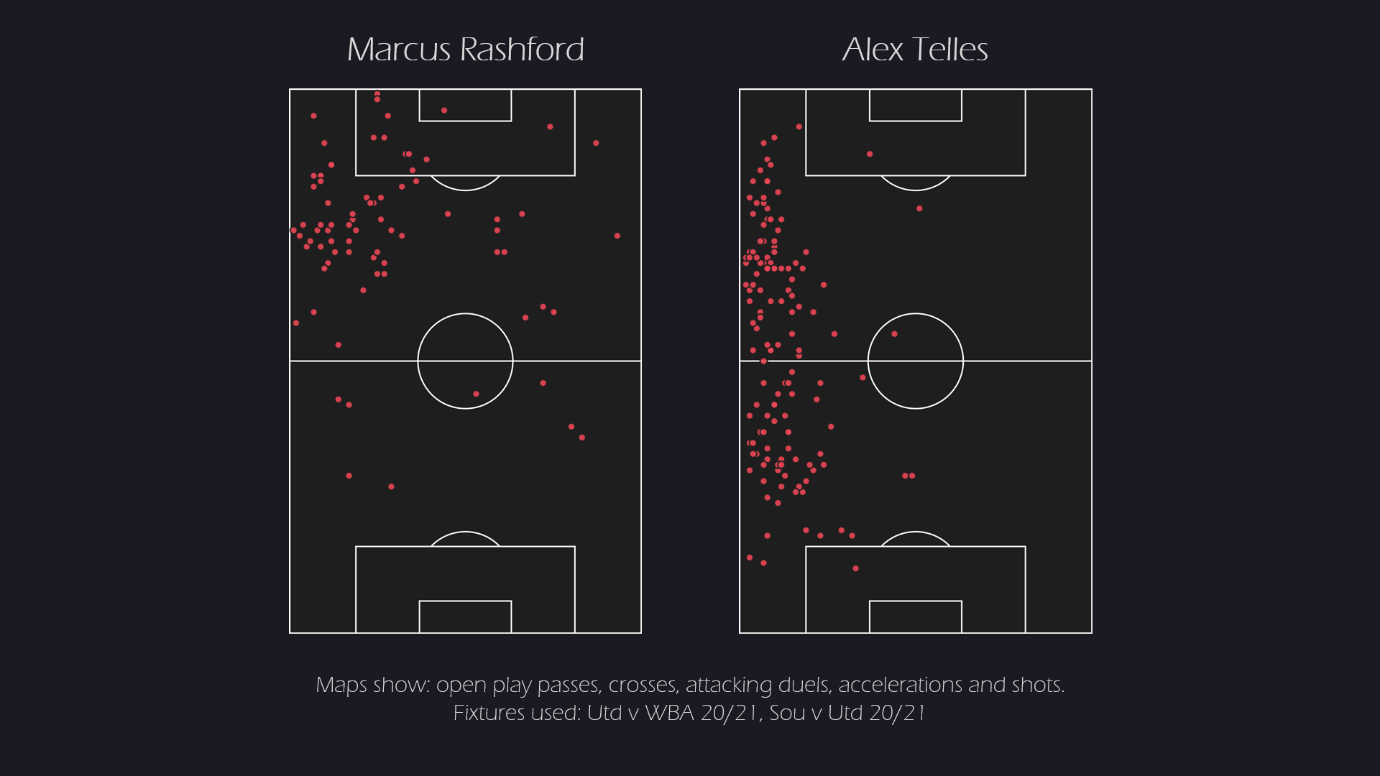 Alongside Shaw, Rashford clearly has less license to roam from the left; it is his responsibility to hold width and distribute into the box. The most obvious example of this pass was a trademark diagonal into a dangerous zone versus Spurs in the first game post-lockdown.

We can see this spate of diagonals from wide-left on the action map below. Shaw tends to invert as a result of Rashford holding width, and usually occupying a 1v1 situation. 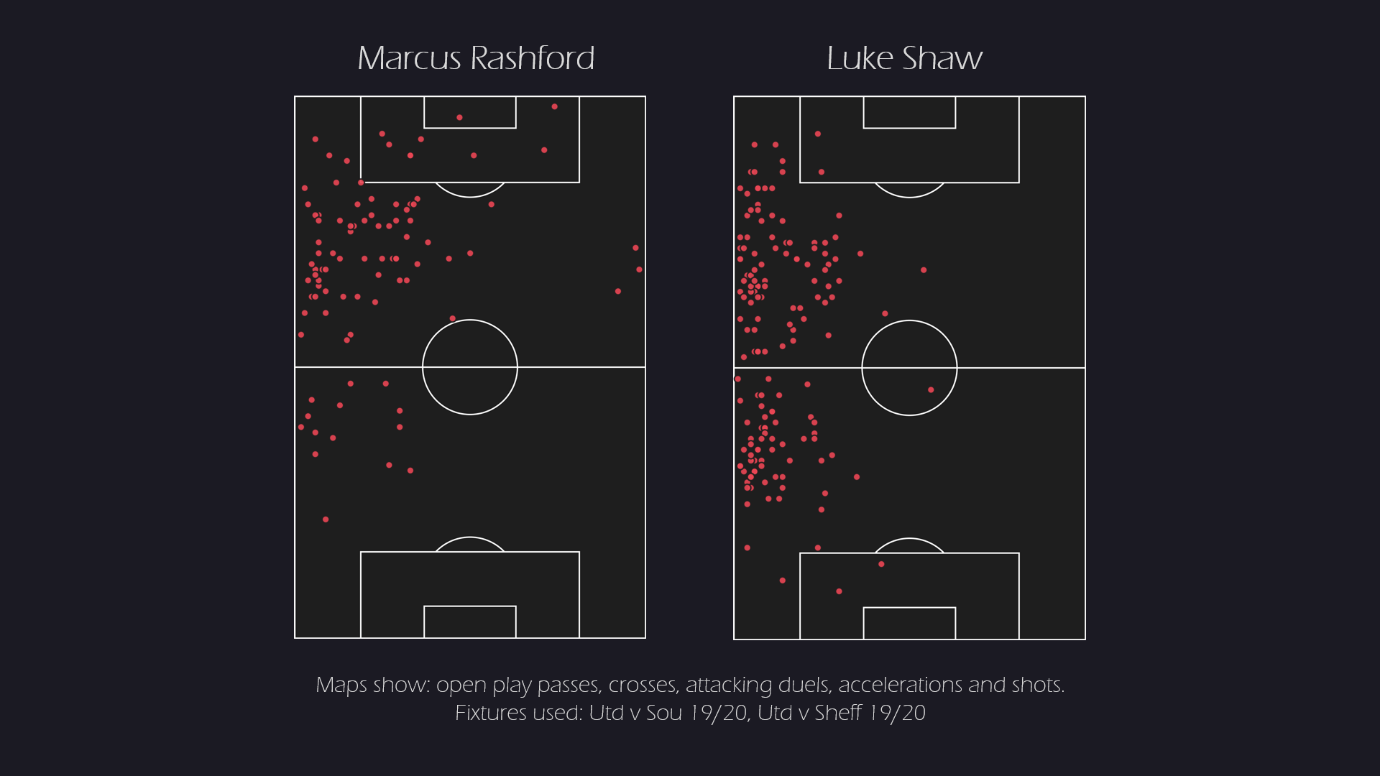 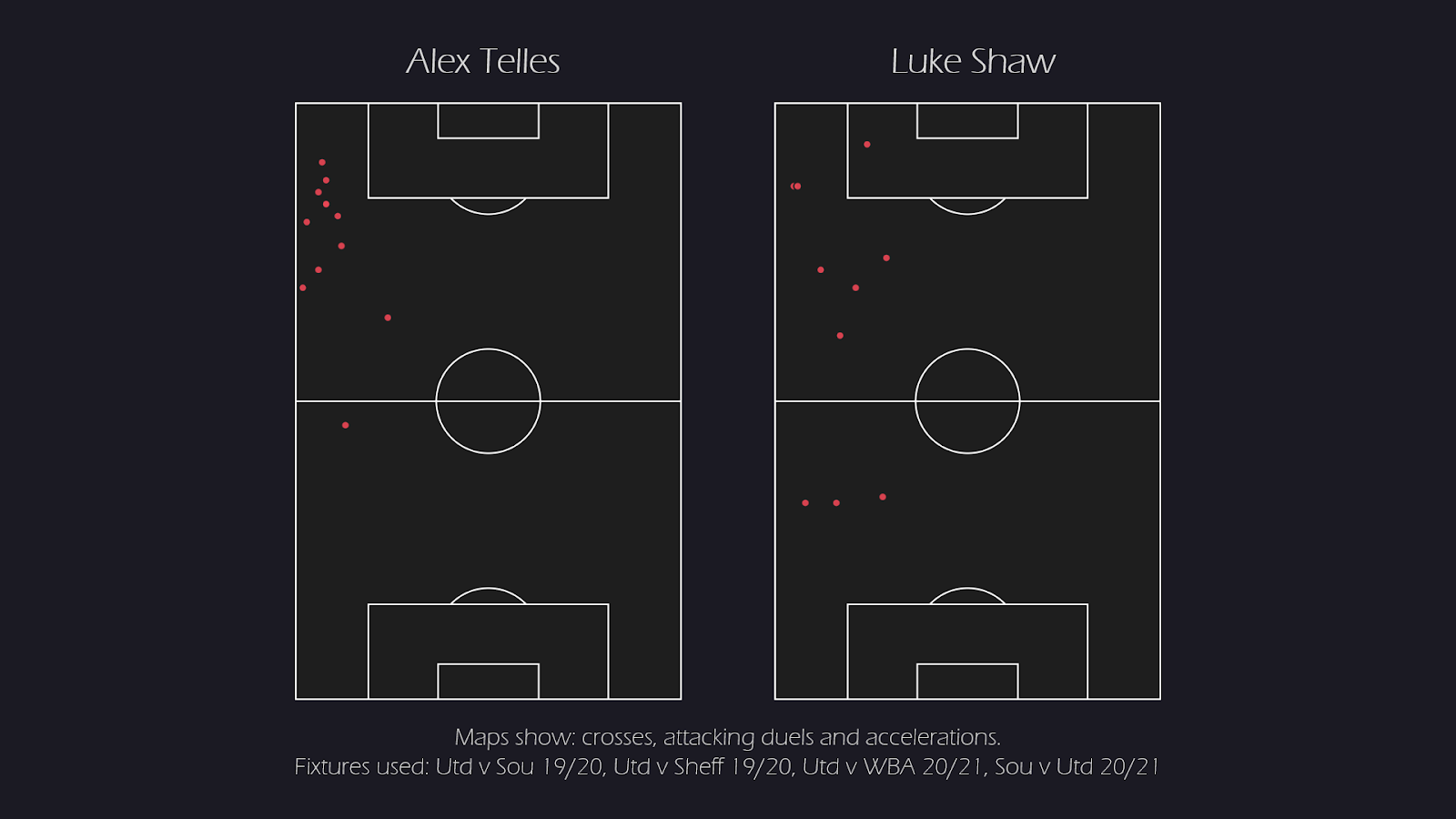 Finally, we can evaluate where Rashford is receiving possession, in order to conclude the aforementioned suggestion that Telles allows Rashford to play more centrally. Player pass received maps help to present this; Rashford’s position in the games versus West Ham and Southampton this season, alongside Telles, have been very good attacking performances.

It is no coincidence that Rashford is receiving closer to goal, allowing Telles to hold width and act as the creative output on the left. Additionally, Telles recorded an assist versus West Ham, crossing to Mason Greenwood. At that moment in time, Rashford had inverted; see performance analysis below. 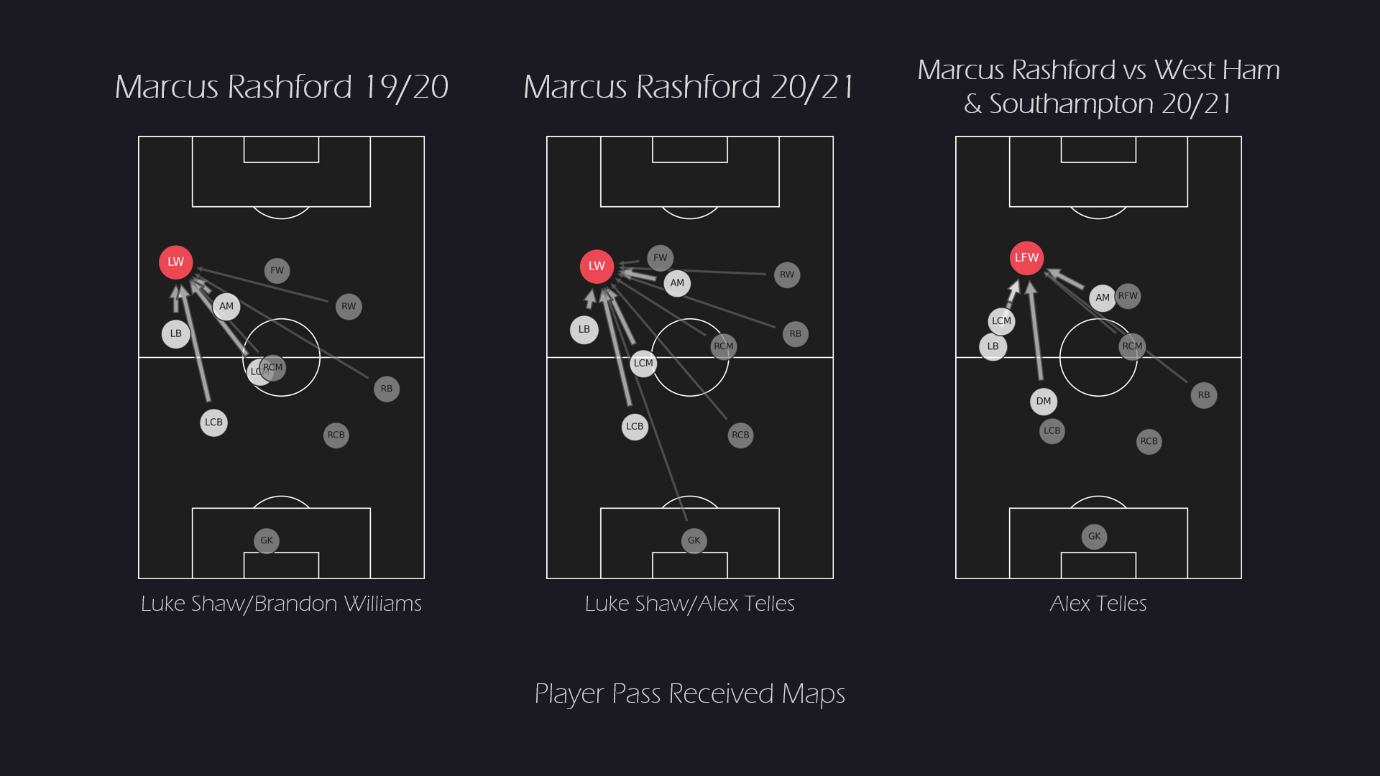 As mentioned above, Rashford has the ability to invert when Telles overlaps him. This isn’t merely to benefit Rashford himself, but it also allows Telles to make runs from deep into attacking space, without congestion. Rashford and Telles share a symbiotic relationship, which benefits the whole team. Rashford doesn’t get enough praise for this, as it isn’t an obvious action.

Furthermore, Rashford also scored against West Ham; the third goal which effectively sealed United’s victory. With spaces opening up in transition, Rashford made a run in behind and received from Juan Mata to score (pictured below). This is purely hypothetical, but perhaps if Rashford was playing in the ‘’creator’’ role he often occupied last season, he would’ve asked for the ball to feet in the highlighted area (red square) for example.

Perhaps, safe in the knowledge that his role is as more of a forward, he darted in behind, from out-to-in. This is a trademark of Mohamed Salah or Sadio Mané from Liverpool; both of whom are secure in the knowledge their fullbacks are wide creative outlets.

Aside from the Rashford-Telles axis, Rashford has been devastating in transition. His goal away at Brighton, where he timed a run in behind, beat three defenders before finishing was a perfect example of his abilities in these scenarios, using pace and composure.

Against Newcastle, Rashford assisted Bruno Fernandes with a delightful pass, after having cut inside. There was little space, but the timing and disguise on the pass effectively gave the Portuguese a free shot at goal. Rashford is a very intelligent player in the large part.

Criticisms may seem few and far between, but there are a few things Rashford could aim to improve. He is currently a very right-foot dominant player (90% right-footed per FBRef). There are times where there is far more space out wide, and Rashford chooses to cut in to congested central zones, on his right foot. Having more confidence on his left would make him less predictable to defend against, he would be a more dynamic threat.

Additionally, Rashford’s shooting technique is very all-or-nothing; in other words, he often opts to lace the ball with power. While this sees him sometimes score with powerful finishes (see his second goal vs Leipzig). Sometimes, a more optimal technique would be to simply place the ball past the keeper. This could help improve his finishing performance, which currently sits at -0.3 non-penalty goals minus expected goals (npG – xG) in the Premier League.

Ultimately, Marcus Rashford has performed with more vigour and intent in recent weeks, and this appears mainly down to Allex Telles facilitating this by holding width and creating off the left. Rashford can dart infield with more conviction and this should see him accumulate more xG per 90 in the upcoming weeks.

If he improves his 1v1 dynamism and expands his finishing repertoire, he could really elevate his status in this team to Bruno Fernandes levels of output. Rashford is on an upward trajectory.