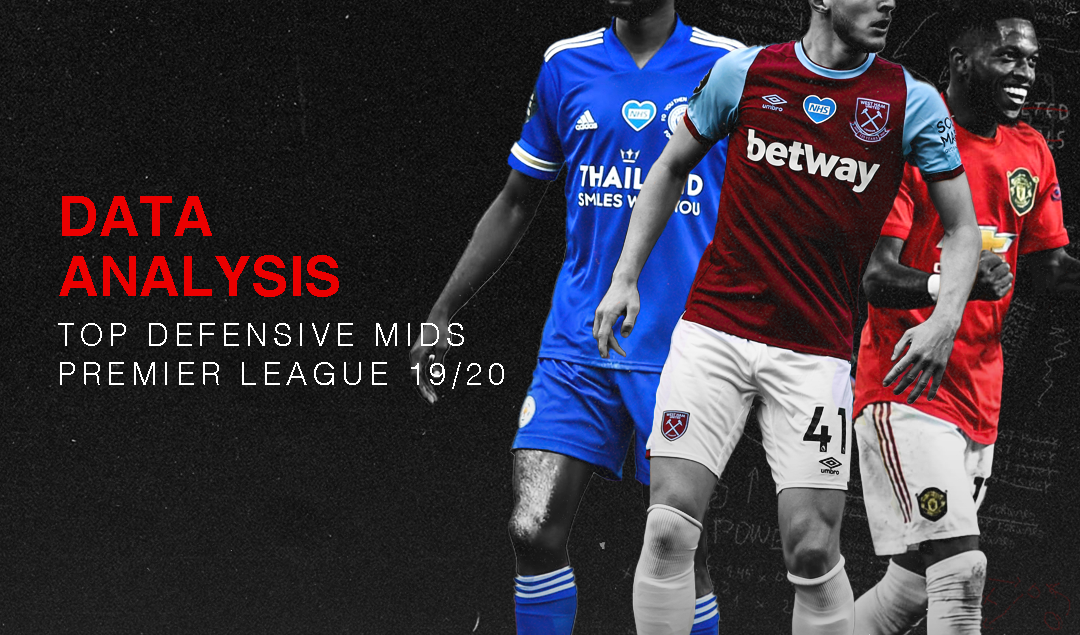 The role of a defensive midfielder in a game of football is often termed as a sitting role, meaning the players who play in this position sit in front of the team’s defense and screen the passes (and of course do a lot more than that).

A defensive midfielder usually plays in a double pivot with another midfielder (perhaps not as strong defensively but who still possesses the basic qualities to help out his partner) alongside him. He can also play as a lone player in the middle of the park with two central midfielders either side of him. Defensive midfielders are mostly involved in the first phase of the build up of an attack, but their primary responsibilities include actions on the defensive side of the game.

Below, I find out the best defensive midfielders from the recently concluded Premier League season. I will be not only looking at their numbers but also their strengths and style of play. I have chosen these players based on their importance for their teams’s success this season.

Note: Midfielders who have at least played 1,500 minutes in the league this season were considered for this analysis. All average values mentioned in the graphs are calculated only for this category of players only. 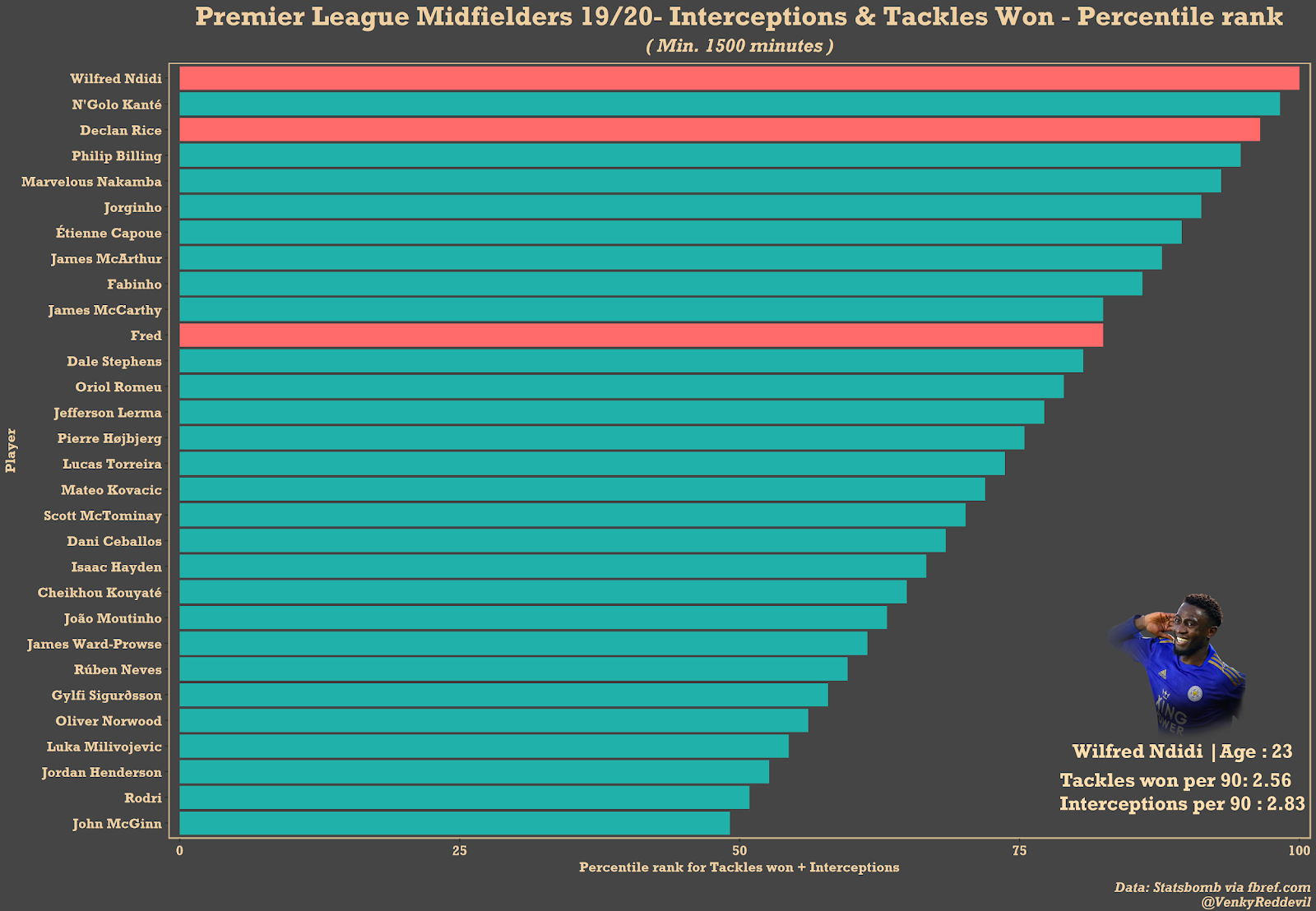 There are few other interesting names in the chart, including Crystal Palace’s James McArthur who has won the third most tackles in the league and Fred who wins a lot of tackles but slightly behind others for interceptions.

Leicester City were the closest challengers to Liverpool during the first half of the season. The Foxes then eventually slipped to 5th, finishing 4 points below the Champions League places, winning only five of their last 18 games. This bad run also coincided with Ndidi’s injury.

The 23-year-old Nigerian is an integral part of the Leicester set-up and is crucial element for the way they play. Leicester usually played in a 4-1-4-1 set up with Ndidi playing as the lone defensive midfielder over the course of the season. His key strengths include his ability to read the situation well and anticipate danger. This skill is also one of the reasons why he stands top of the chart for tackles won per 90.

Let’s take a look at Ndidi’s performance in the 2-0 win over Arsenal. As seen in the image, Ndidi is quick to react to any kind of situation. It has to be said that he is also very good at defending during transitions. He is mobile throughout the game, staying aware of what is happening around him and constantly alerting his teammates. 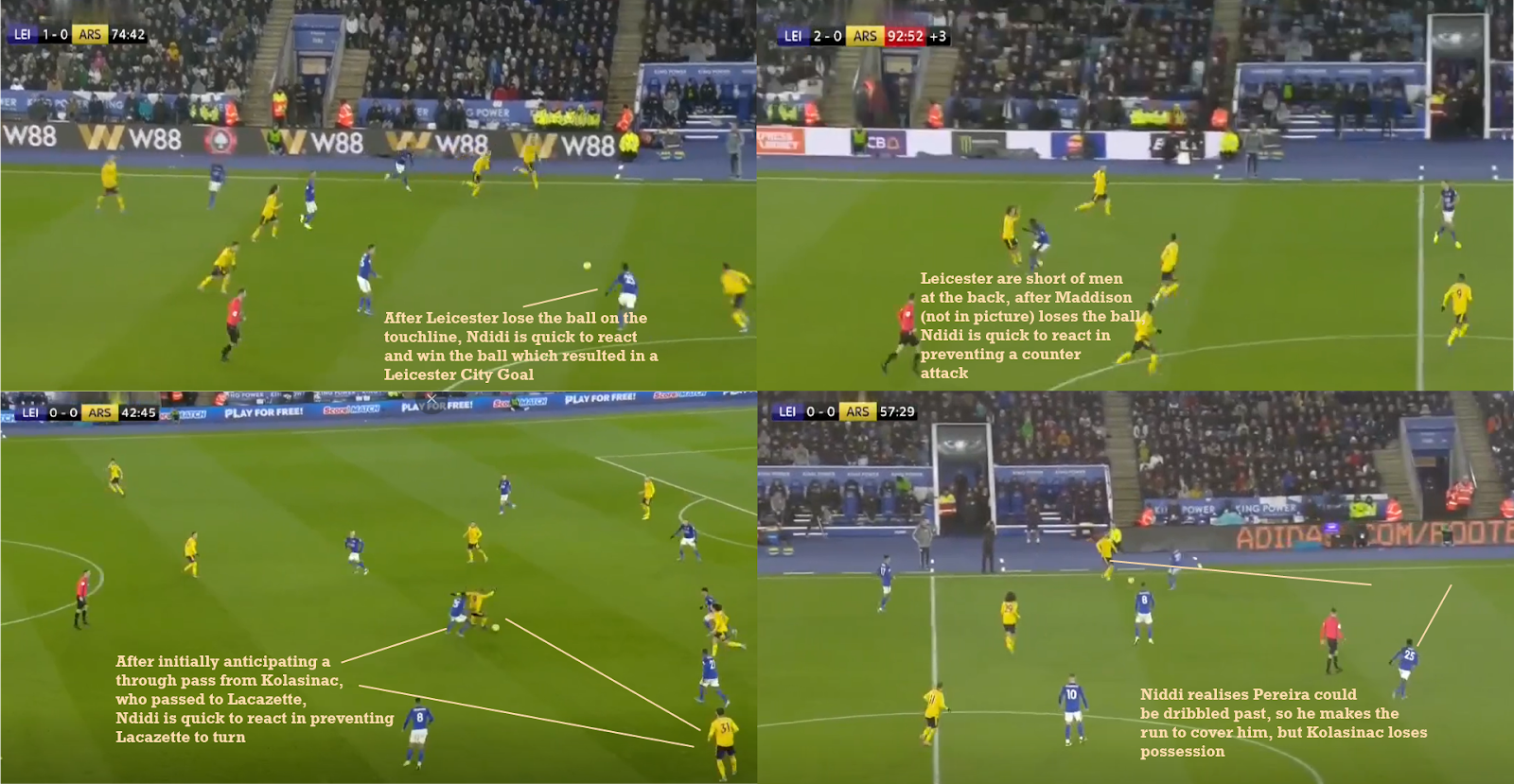 Ndidi is not among the very best just for tackling; only two other players have applied more successful pressures than the Foxes midfielder. This is vital to Leicester’s counterattacking style of play. Ndidi, being a natural ball-winner, winning duels in dangerous positions in the pitch in order to release the Leicester attack for the counter.

One of the most improved players in the Premier League this season, Rice’s positional discipline and awareness has turned him into one of the best tacklers not just in England, but in the whole of Europe. He has in fact won more tackles than Ndidi, but trails behind the Nigerian for Tackles per 90.

Starting his career as a centre back has helped him adapt to the role of a defensive midfielder with ease. Another attribute that puts Rice ahead of other defensive midfielders is his dynamism and versatility. He has started as a CM, DM, CB in a 4-2-3-1/4-4-2 for West Ham this season. The snapshots below show some of Rice’s key attributes that were discussed above. 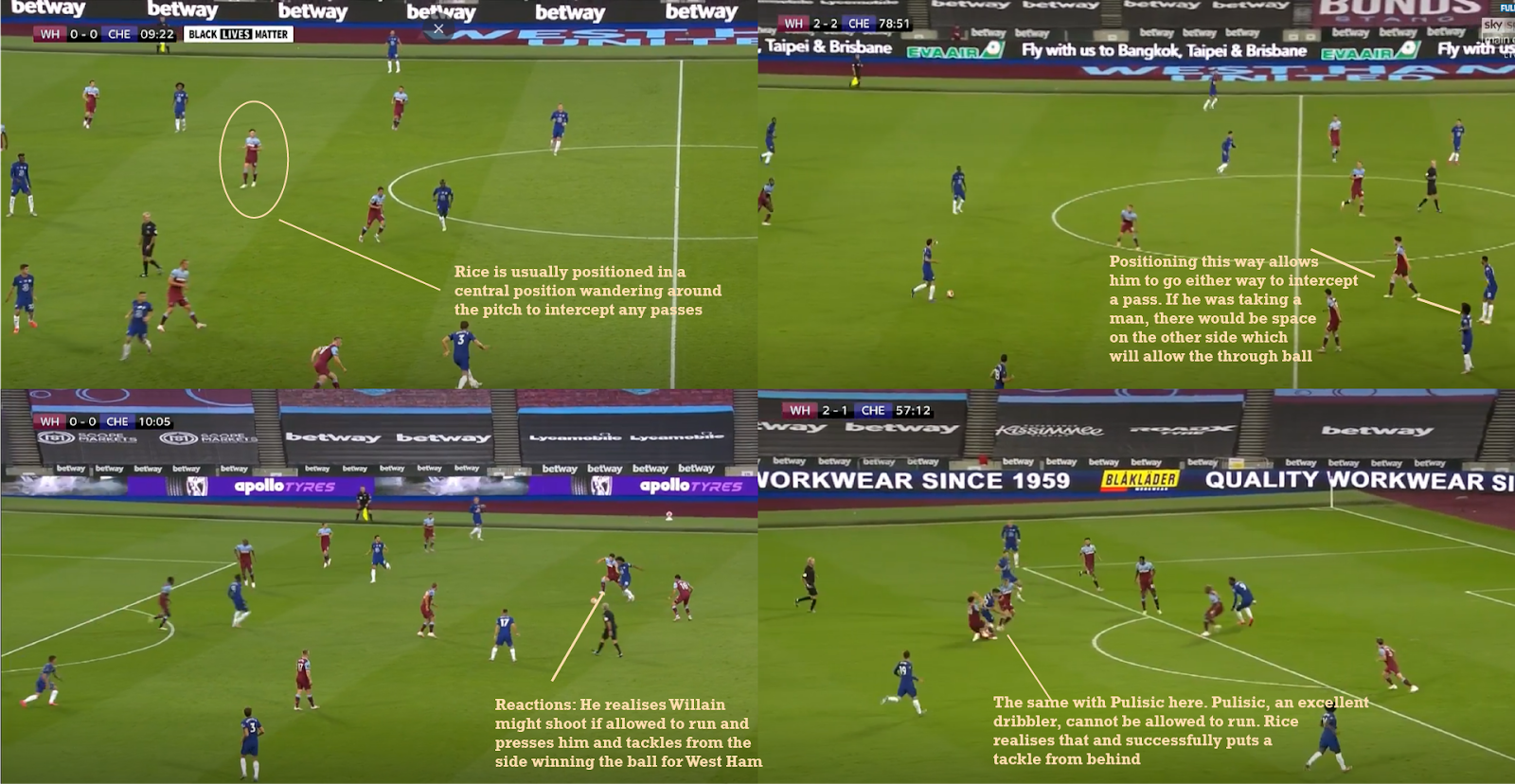 Another aspect of Rice’s game that needs to be lauded is his composure – a key aspect in any defensive midfielder’s game. He constantly checks his surroundings to stay aware of where the opposing player is. This allows him to make better decisions inside the box – whether to clear the ball or calmly pass it to a teammate.

As demonstrated in the graph below, Ndidi and Rice fall in the first quadrant (top right corner) along with a lot of other defensive midfielders. Neither player is afraid to go against the best players in order to win the ball.

In spite of not playing regularly in a defensive midfield position, Liverpool’s Jordan Henderson falls under this category. Manchester United’s Fred, who ranks in the 82nd percentile for Tackles won + Interceptions, is placed in the fourth quadrant (bottom right) in the below graph. 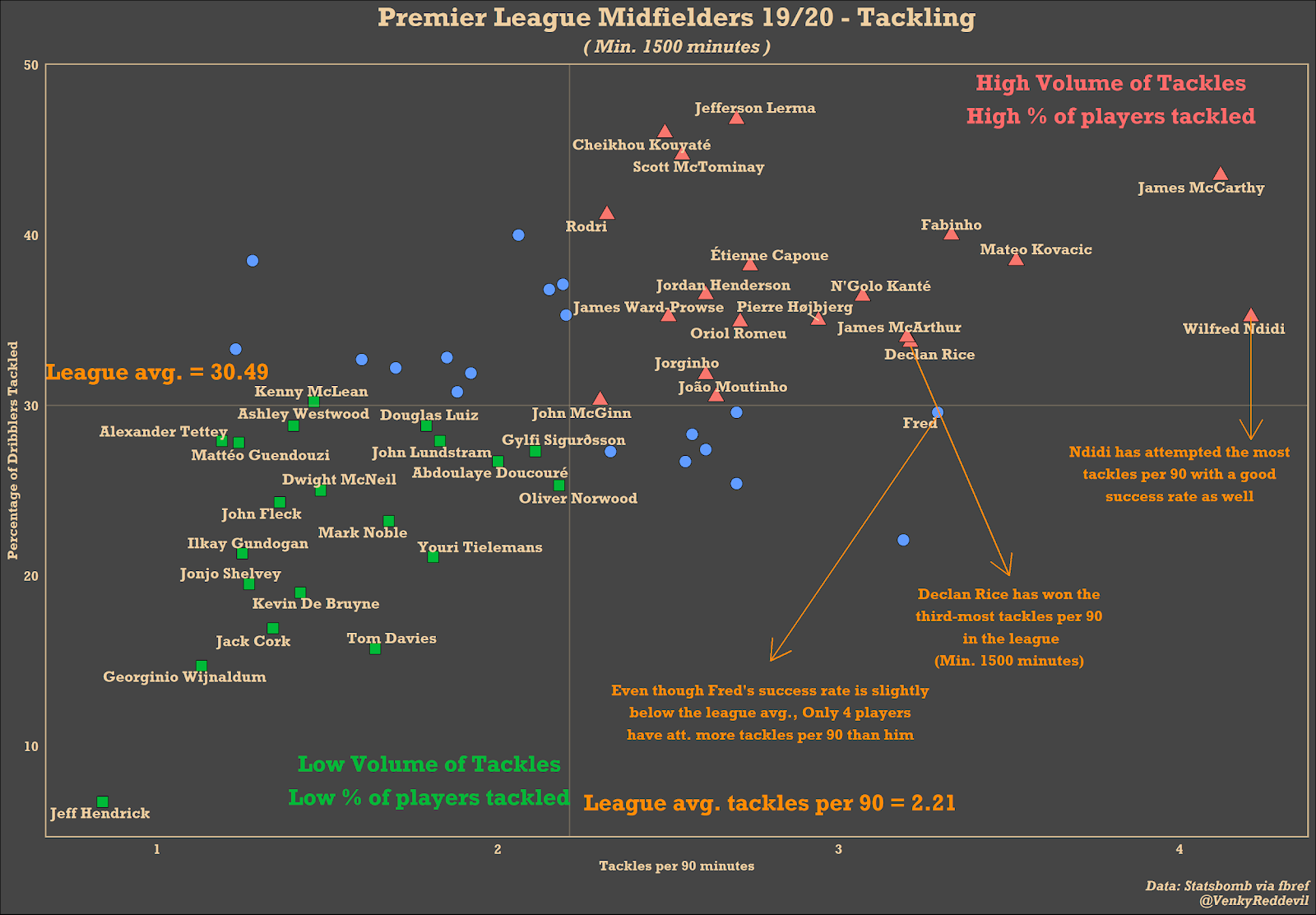 Having analyzed two important aspects for defensive midfielders and looking at the profiles of the best in those attributes, we move to another aspect of the game that defensive midfielders often excel at: the ability to pressure the opposing player on the ball and dispossess him. This can not only help his team win the ball back and retain possession, but can also help to quickly initiate counter attacks. 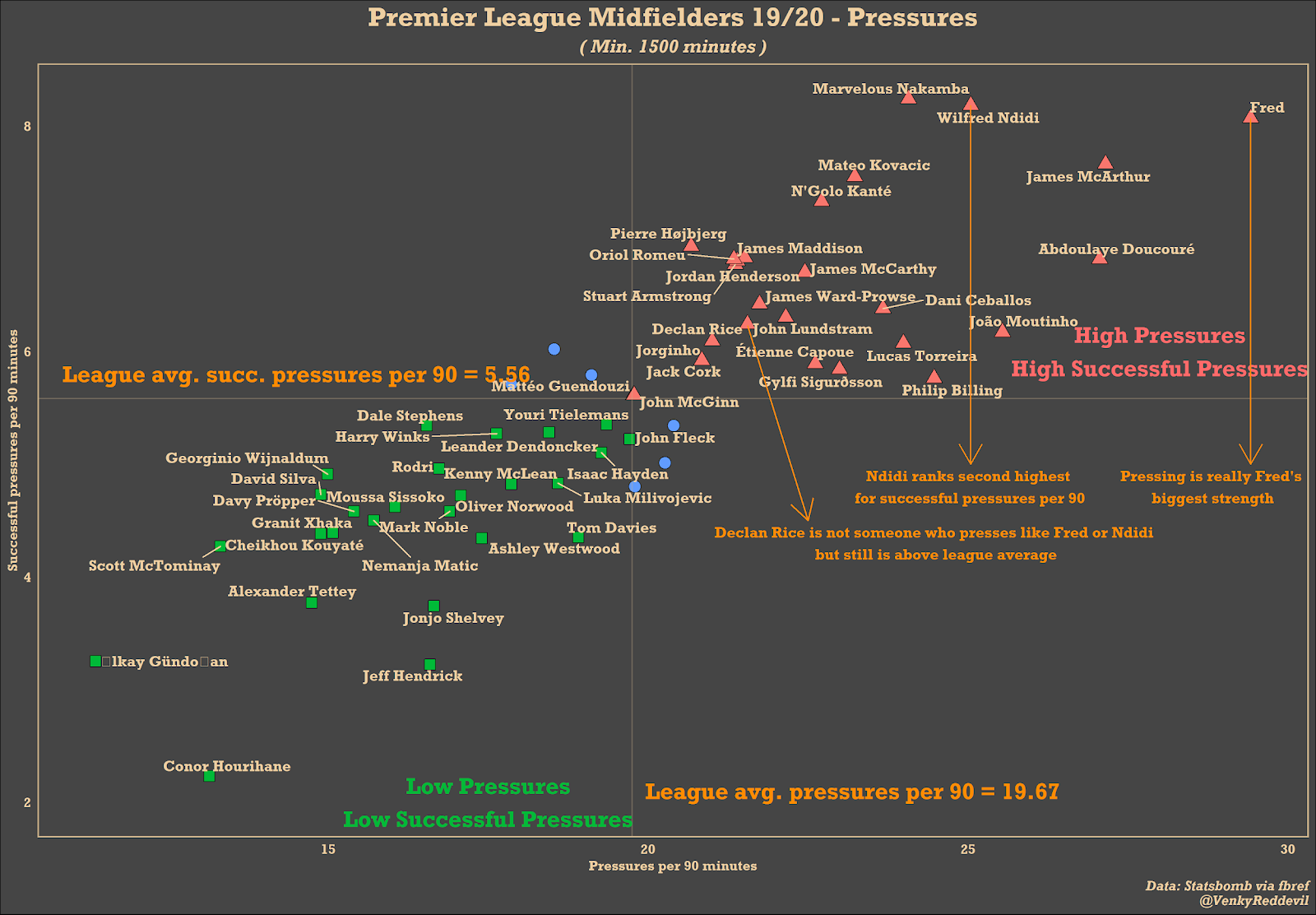 Fred was immense for Manchester United in the absence of Paul Pogba and Nemanja Matić during a crucial period of the season. Having struggled for game time in his first season in England after joining from Shakhtar Donetsk in the summer of 2018, Fred established himself in the United side this season, forming a promising midfield duo with Scott McTominay.

With Fred dropping back to the bench with the return of Pogba and Matić after the restart, it is easy to forget the role he played in United’s successful fight for the Champions League qualification prior to the Premier League’s restart.

Pressing is one aspect of his game that he thrives at and the numbers speak for themselves. Let’s take a look at his performance away to Chelsea, where he was absolutely vital for his team’s 0-2 victory. 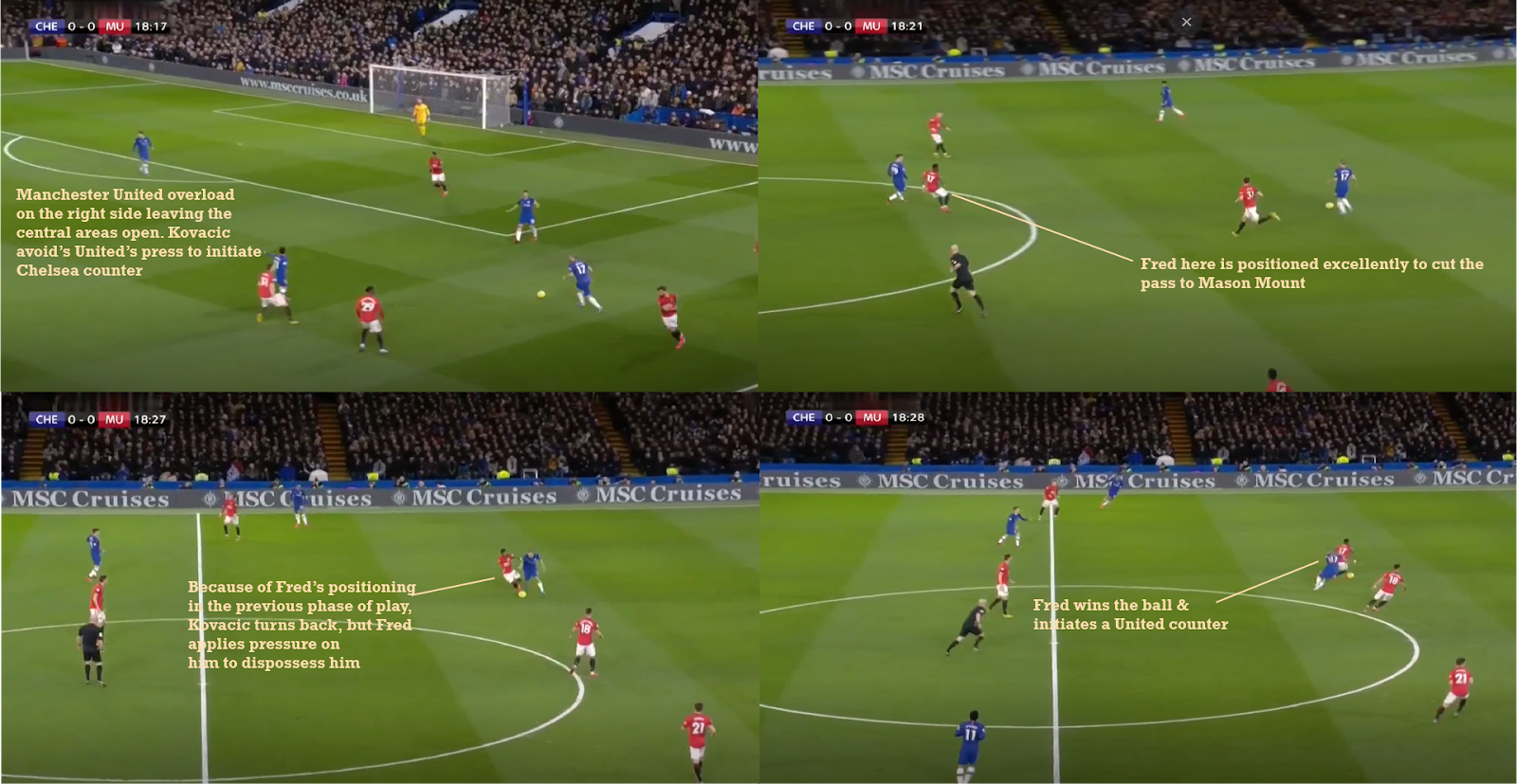 Here are a few more instances of Fred’s pressing and tackling in the game against Chelsea as well as the Manchester Derby at Old Trafford. 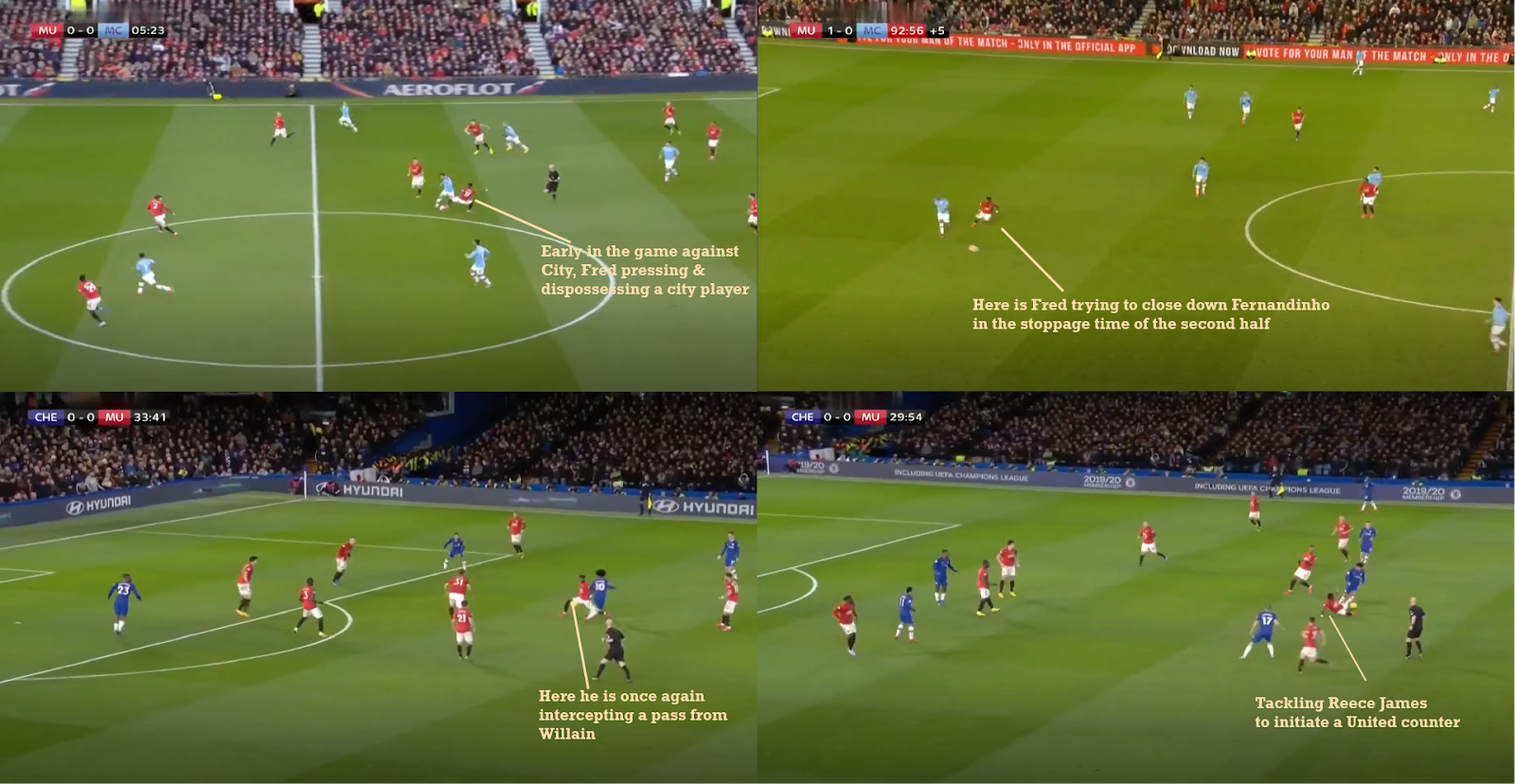 When it comes to ball retention, Ndidi and Rice aren’t easily dispossessed, but their passing under pressure isn’t great either. In contrast, Fred places above average for both. Because he is involved in a lot of Manchester United’s build play as well as the pressing in the attacking third, it is fair to say he gets dispossessed a lot more than his counterparts at the King Power Stadium and the London Stadium. 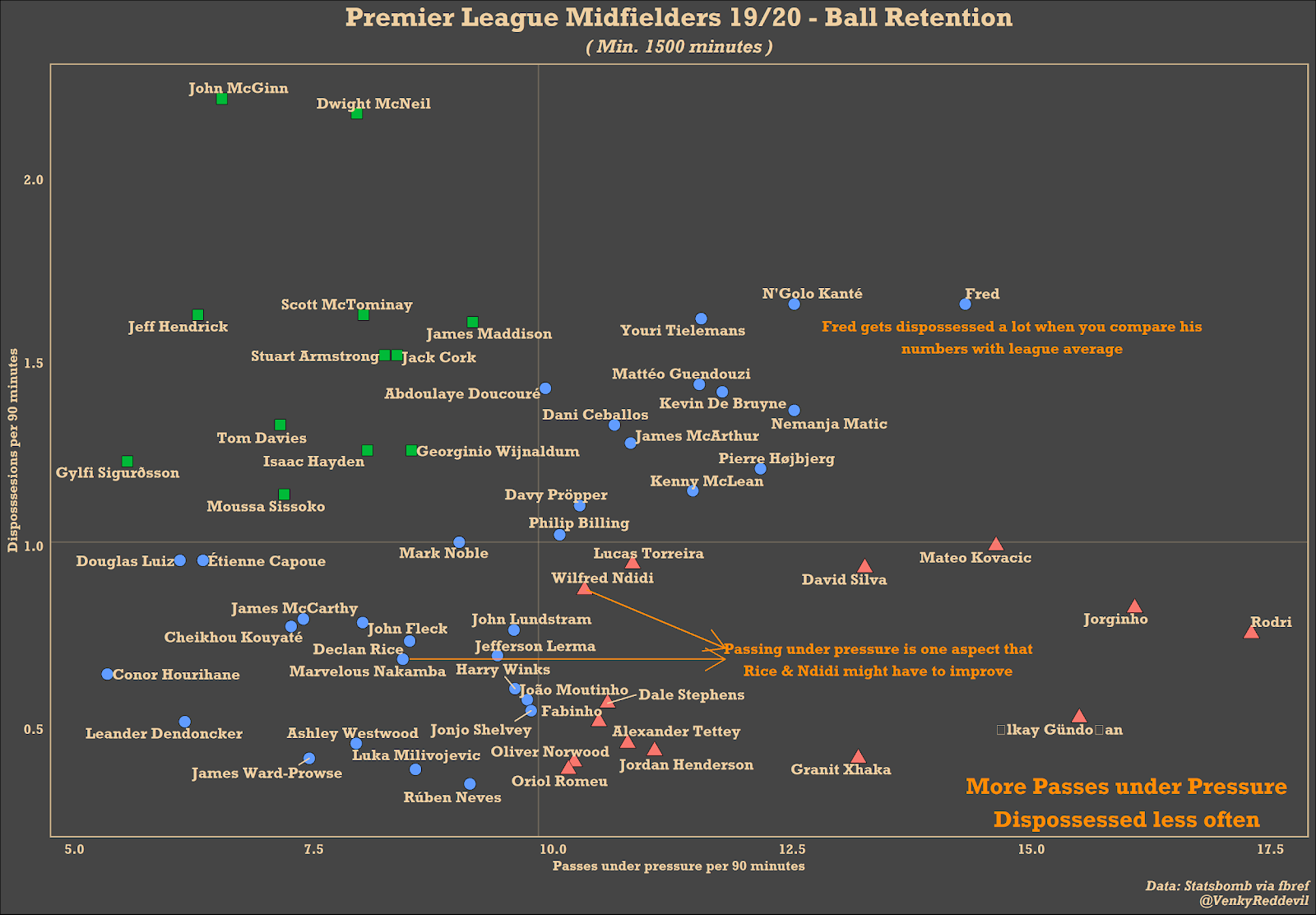 When it comes to progressive passing, Fred is again the better of the three, but even when he played as a defensive midfielder in the absence of Matić, the Brazilian kept wandering around the pitch, acting like a box-to-box midfielder with McTominay covering for him whenever he pushed forward. 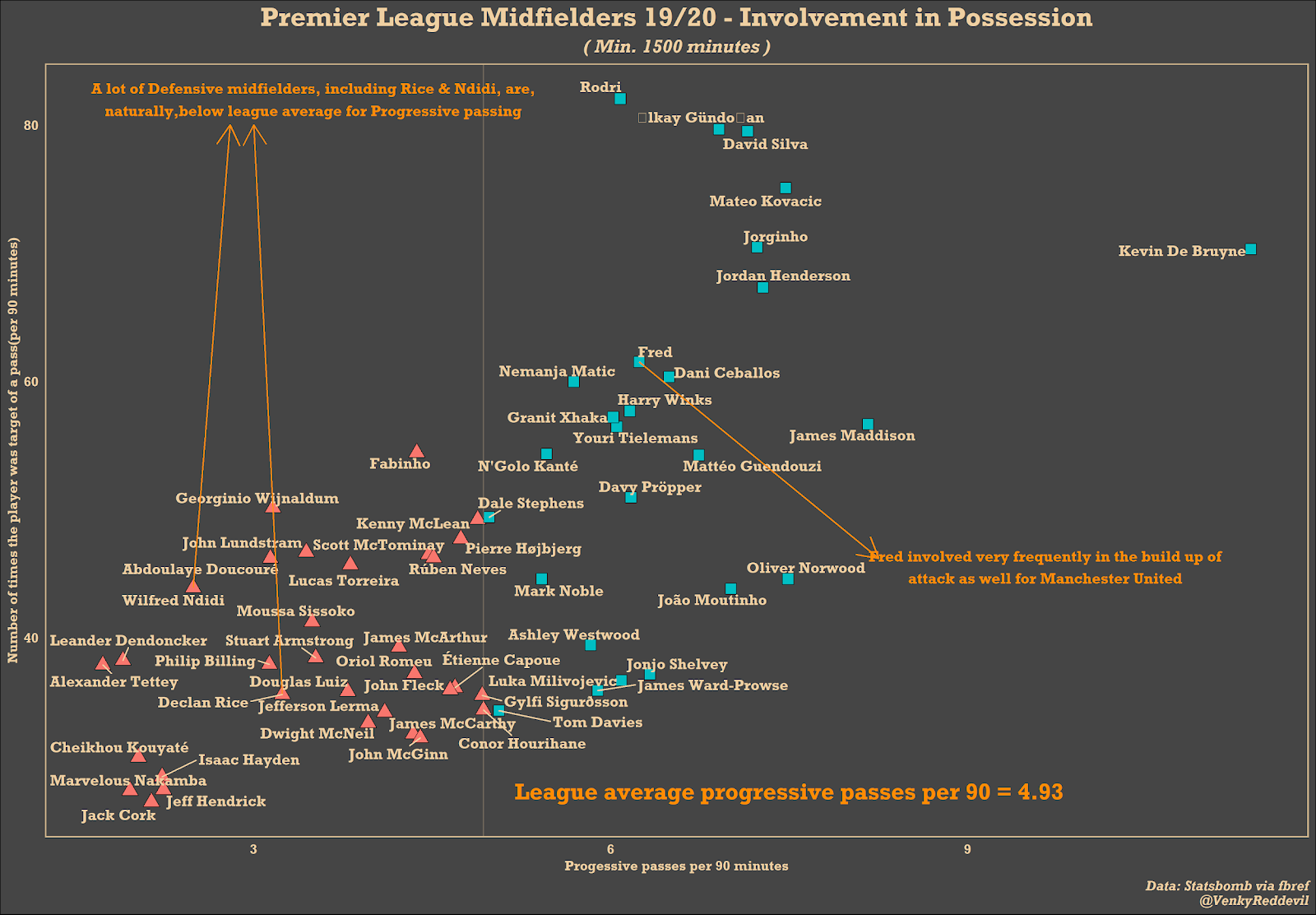 It is fair to dispute Fred’s position as one of the best defensive midfielders in the league this season given the fact that he did not play as a natural defensive midfielder and was benched straight away when Matić returned from his injury. But, as insisted previously, the players (Ndidi, Rice, Fred) were chosen based on the role they played as well as their importance in their teams’s respective success.

Players like Fabinho, James McArthur, James Ward-Prowse, Pierre-Emile Højbjerg and Granit Xhaka have all had fairly excellent seasons, but their importance has been lesser in their teams’s success when you compare them with the three that have been chosen in this article.

I would like to thank fbref.com for providing all the stats that were useful for the analysis.