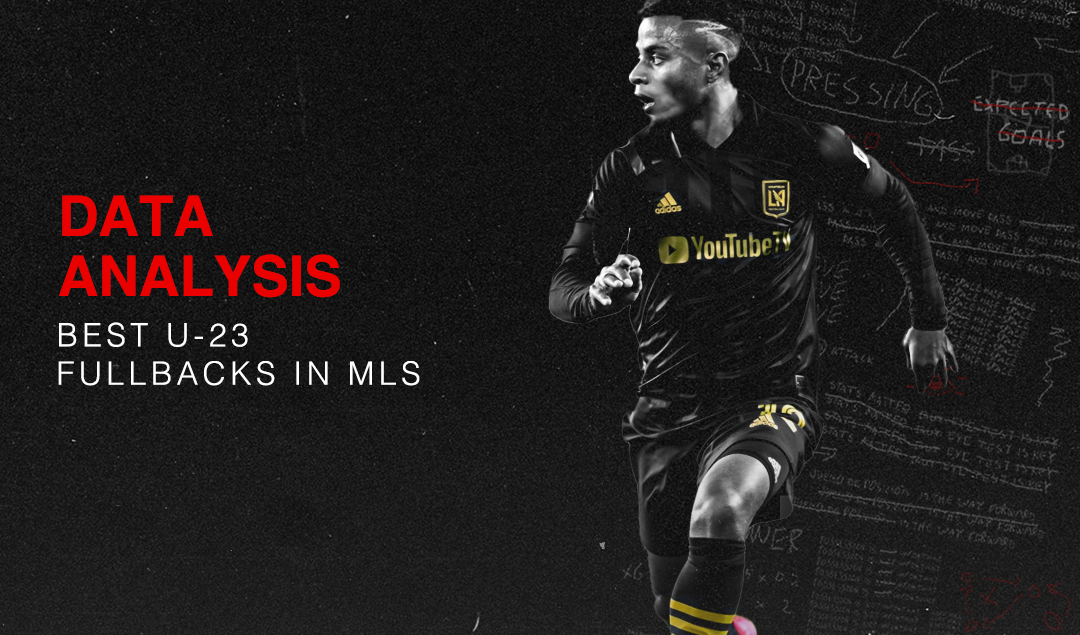 When Bayern Munich completed the signing of 17-year-old winger Alphonso Davies from Vancouver Whitecaps for a base fee of $13.5 million, there was plenty of skepticism and curiosity surrounding the deal. However, in fewer than two years, Davies has already established himself as one of the best left backs in Europe, playing a leading role in Bayern’s historic treble under Hans-Dieter Flick.

Davies may have been an outlier in terms of versatility and readiness for the top level, but his unprecedented breakthrough does shed light on a league normally ignored for its talent production. There are plenty more raw prospects who are sowing their seeds in MLS and bracing themselves for the next big move. We’re going to use data to analyze the best U-23 fullbacks in MLS.

To begin, let’s focus on how well these players stack up in terms of defending. By comparing Shots Blocked per 90 with Interceptions per 90, we can measure how these players perform in terms of last-ditch defending, positional awareness and anticipation.

Whilst the majority of these candidates are clustered around the same data points, the one player that stands out is Real Salt Lake defender Aaron Herrera. Born in Las Cruces, New Mexico to a Guatemalan father and an American mother, Herrera got his first big break in the 2017 U-20 FIFA World Cup, impressing at right back as Tab Ramos’s side topped their group.

Herrera would miss the first knockout round match due to accumulation of yellow cards, and was benched in the quarterfinal elimination to Venezuela in favor of future teammate Justen Glad, but his performances in South Korea caught the eye of plenty MLS teams. On December 15, 2017, Herrera signed as a Homegrown Player for Real Salt Lake, where he has since emerged into one of the top right backs in the league. At 23 years of age, he’s well on his way to winning his first senior cap for the national team.

While the previous metric helps us analyze things such as positional awareness, last-ditch defending and anticipation, it doesn’t give us the full picture. By comparing Tackle Success % with Tackles per 90, we can see which defenders stand out amongst the rest.

One player who absolutely flourishes in this metric is 21-year-old Diego Palacios. After an impressive loan spell at Willem II, Palacios joined Los Angeles FC on August 12, 2019, where he has since gone on to become a starter under Bob Bradley. The Ecuadorian left back boasts a tackle success rate of 71.87%, rivaled only by Chicago Fire’s Miguel Navarro. 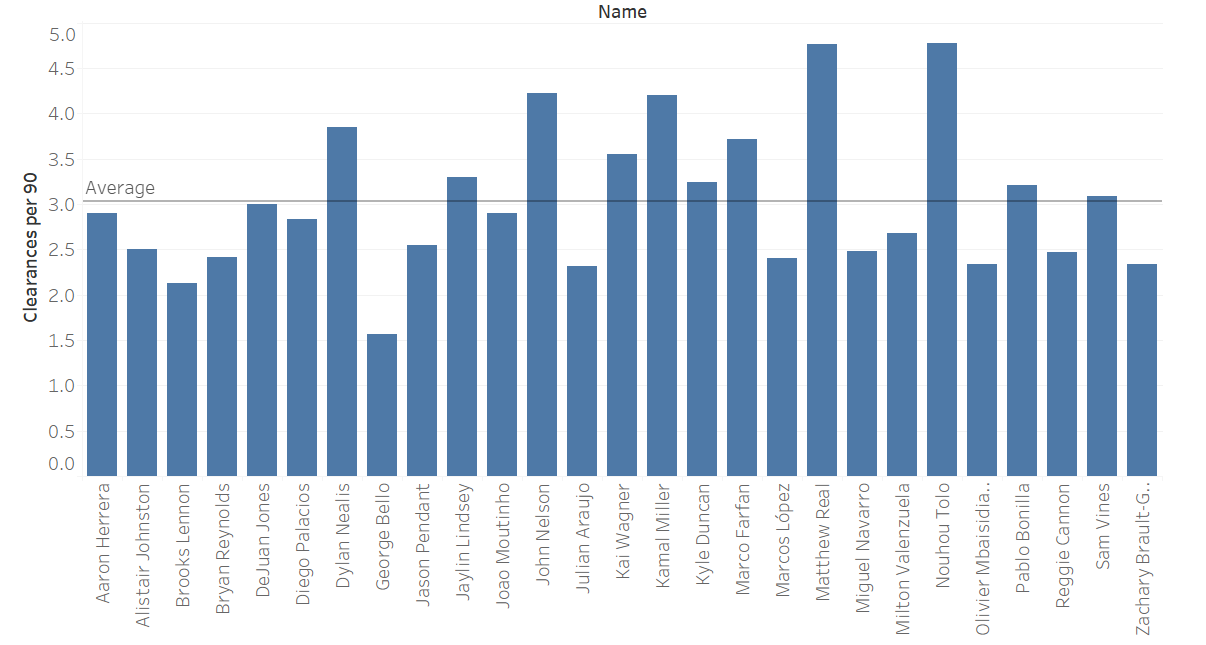 Moving onto the following category, we can take a look at how many clearances these U-23 fullbacks in MLS are averaging per 90 minutes. Matthew Real, a Brazilian-American left back who was called up for the 2019 U-20 FIFA World Cup with the U.S., stands out with nearly 4.7 clearances per 90. Real currently finds himself second-choice to Kai Wagner for the first-place Philadelphia Union, but at 21, he still has plenty of time left to impress Jim Curtin and prove himself worthy of a starting spot.

Another player who does particularly well in this regard is Nouhou Tolo. The 23-year-old Cameroon international has been a constant fixture at left back for Brian Schmetzer’s Seattle Sounders, who have conceded 23 goals in 22 league matches this season, the fewest in the Western Conference. If Seattle are to repeat their MLS Cup heroics this year, Tolo will surely play a leading role in it.

To round off the defensive section, let’s address a statistical metric that holds weight both in the defensive and offensive side of the game: pressing. By comparing Pressure Success % with Pressures attempted per 90, we can get a glimpse at which fullbacks stand out in terms of pressing.

Once again, Palacios comes off as the undisputed frontrunner in this category, ranking well above the rest of his competitors for Pressure Success %. Only Julian Araujo (19) places above Palacios in terms of Pressures attempted per 90, and the Mexican-American’s performances this season have led to him being awarded the LA Galaxy Defender of the Year award.

Marco Farfan of Portland Timbers and Alistair Johnston of Nashville SC also place well in this metric with a Pressure Success % of around 37%. However, it is clear that Palacios is the standout performer in the defensive metrics; despite lagging behind in terms of shots blocked and interceptions, he commits the most tackles per game, boasts the best tackle success rate, and does well to press the opposition and close down opposing players.

It should be noted that teams that operate with high-pressing schemes will skew the mean in this regard, but it’s still important to take this metric into account in order to see which players could adapt well to a high-pressing outfit in a top European club.

It’s no secret that most teams value attacking output over defensive solidity when scouting their next fullback signing. In order to judge these fullbacks’s offensive production, we’re going to compare their passes into the opposition penalty area (PPA per 90) with the amount of crosses they deliver each game.

Unlike the previous metrics, there isn’t one clear winner from this data pairing. Bryan Reynolds ranks well above his competitors in terms of PPA per 90, and with Reggie Cannon joining Boavista in the summer, the 19-year-old Texan has done remarkably well to fill his lofty shoes at right back. With Reynolds in the line-up, FC Dallas managed impressive victories over Sporting Kansas City and Nashville SC, sealing the 6th place in the West and booking a ticket to Portland for next weekend’s MLS Cup clash.

Once again, Palacios does remarkably well with 4.1 crosses per 90, although Real narrowly edges him for first place in that department with 4.37 crosses per 90. Despite splitting minutes with Raymon Gaddis at the right back position, Philadelphia Union’s Cameroonian defender Olivier Mbaissidara Mbaizo shows up favorably in both data points.

To get a further idea of how these players shape up in attack, let’s take a look at progressive distance. Progressive distance for passes (x-axis) is the amount of yards that the completed passes have travelled towards the opponent’s goal.

On the other hand, Progressive distance for Player (y-axis) is the total amount of yards the player moved towards the opponent’s goal while controlling the ball with their feet. Both of these measures will give us a good idea of which fullback tends to attack more by supplying forward passes to their teammates and also by making progressive runs towards the opponent’s goal.

In terms of ball progressive distance, 22-year-old left back João Moutinho comes out on top, his passes covering an average of 382.3 yards per game towards the opponent’s goal. A product of Sporting’s Youth Academy, Moutinho left Portugal in 2017 to play for the Akron Zips, and his impressive performances at the collegiate level led to him being selected first overall in the 2018 MLS SuperDraft, although he was traded to Orlando City at the end of the year in exchange for Mohamed El-Monir.

On the other axis, Reynolds makes the most progressive runs per game with an average of 187.5 yards per game towards the opponent’s goal. New England Revolution’s DeJuan Jones (23) trails Moutinho in hot pursuit with 177.7 yards per game, whilst Columbus Crew’s Milton Valenzuela also does very well in this metric.

We can also take dribbling into account when analyzing fullback’s attacking traits. Dribbling near the touchlines helps players beat their opponents and make progressive runs or create chances for teammates. In order to properly scrutinize dribbling ability, let’s compare Dribble Success % with Dribbles per 90.

Once again, there isn’t a clear favorite from this graph, but 23-year-old Kyle Duncan places first in terms of Dribbles per 90. After a brief spell at Valenciennes, the Brooklyn native returned to his boyhood club in 2018, and following the departure of Michael Murillo to Anderlecht in December 2019, Duncan has cemented a starting spot in the right back position for New York Red Bulls.

Trailing behind Duncan, Brooks Lennon, George Bello, Herrera and Reynolds all do well in terms of Dribbles per 90 — the first three also show up well in the other metric. Despite being second choice to Ryan Hollingshead, FC Dallas left back John Nelson ranks first in terms of Dribble Success %, whilst Orlando City’s Kamal Miller also does favorably in this category.

Finally, let’s address impact in the final third by weighing two different metrics: Shots per 90 and Touches in Penalty Area per 90.

Araujo ranks well above the rest in terms of Touches in Penalty Area per 90 with over 2.6, followed by Jones, Palacios and Moutinho. In terms of shots per 90, Bello is the clear winner with nearly 1.4, whilst Real and Navarro also do well in this data category.

From Bryan Reynolds to Olivier Mbaissidara Mbaizo to DeJuan Jones, it’s clear that there are plenty of promising fullbacks in MLS with the potential to make a big move in the coming years. However, by grinding the data, we can conclude that these are the top five U-23 fullbacks in MLS.