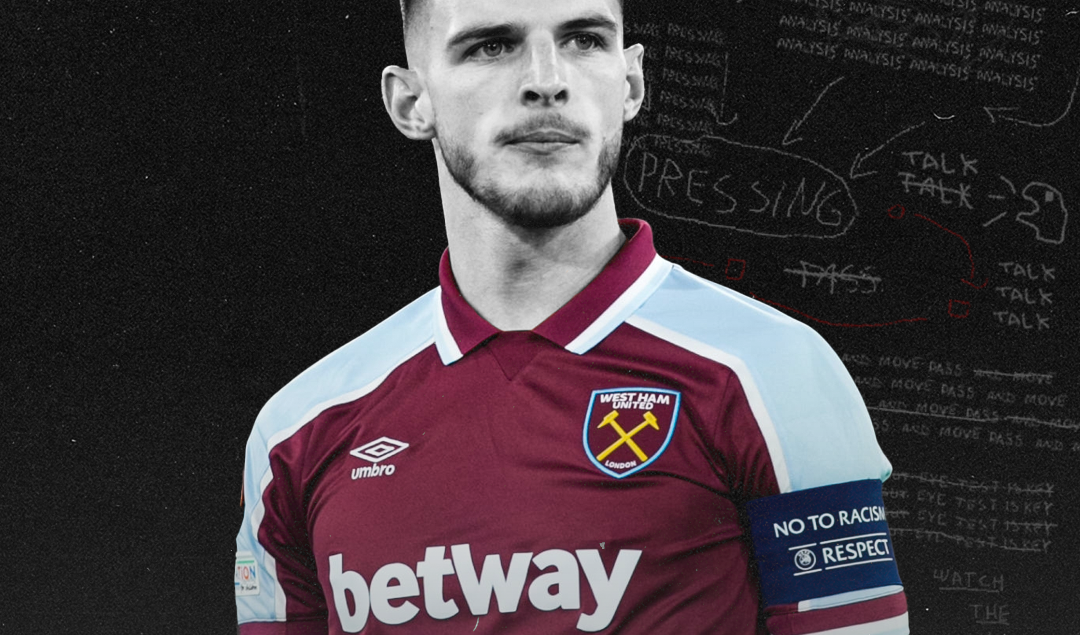 Last month, UEFA announced the changes that will come to the three men’s club competitions come 2024. Each tournament will move to a single table, referred to as the “Swiss format,” with 36 teams at this league phase.

While the 36 teams that partake in the Europa Conference League league phase will only play six matches, both the Europa League and Champions League will meet eight different opponents at the same stage. What is potentially the most significant point is where the four extra Champions League places will go for the competition’s league phase.

One place will go to a domestic champion via the qualifying rounds. Another will go to the third-place team from the fifth highest-ranked national association, which at the time of writing continues to be France. Currently, this club plays in the penultimate qualifying round.

Finally, the other two places will go to the two countries that had the best campaign in the previous season. This place will be awarded to the club that finishes immediately below the automatic Champions League spots. Those two countries would therefore earn an extra European place altogether, as the other European spots would be passed down accordingly.

Using the end of the 2021/22 season as an example, England and The Netherlands would have been awarded with a fifth and second automatic place respectively, with Arsenal and PSV Eindhoven benefitting. West Ham United would end up in the Europa League, while Leicester would take the Conference League place from the Premier League.

Feyenoord would enter the Champions League in the qualifying rounds, with Twente taking their place in the Europa League. Utrecht (using the domestic table here) would earn the last European spot available in this case.

But the most important question is, how does UEFA determine the two best countries? Short answer; they already have a method of doing so. This is known as the UEFA National Association Coefficient. This reflects each country’s performance via their clubs in the continental club competitions throughout the five most recent seasons.

Here at Breaking The Lines, we will explain how these coefficients are calculated. We will cover the UEFA Club Coefficients as well, which as the name suggests, ranks clubs based on their own performances in Europe. We will provide context on the National Association Coefficient and how that is done.

Teams taking part in this round do not earn points themselves. Along with match points, teams also receive bonus points based on the rounds they reach. The table below covers where the points are awarded and how much. 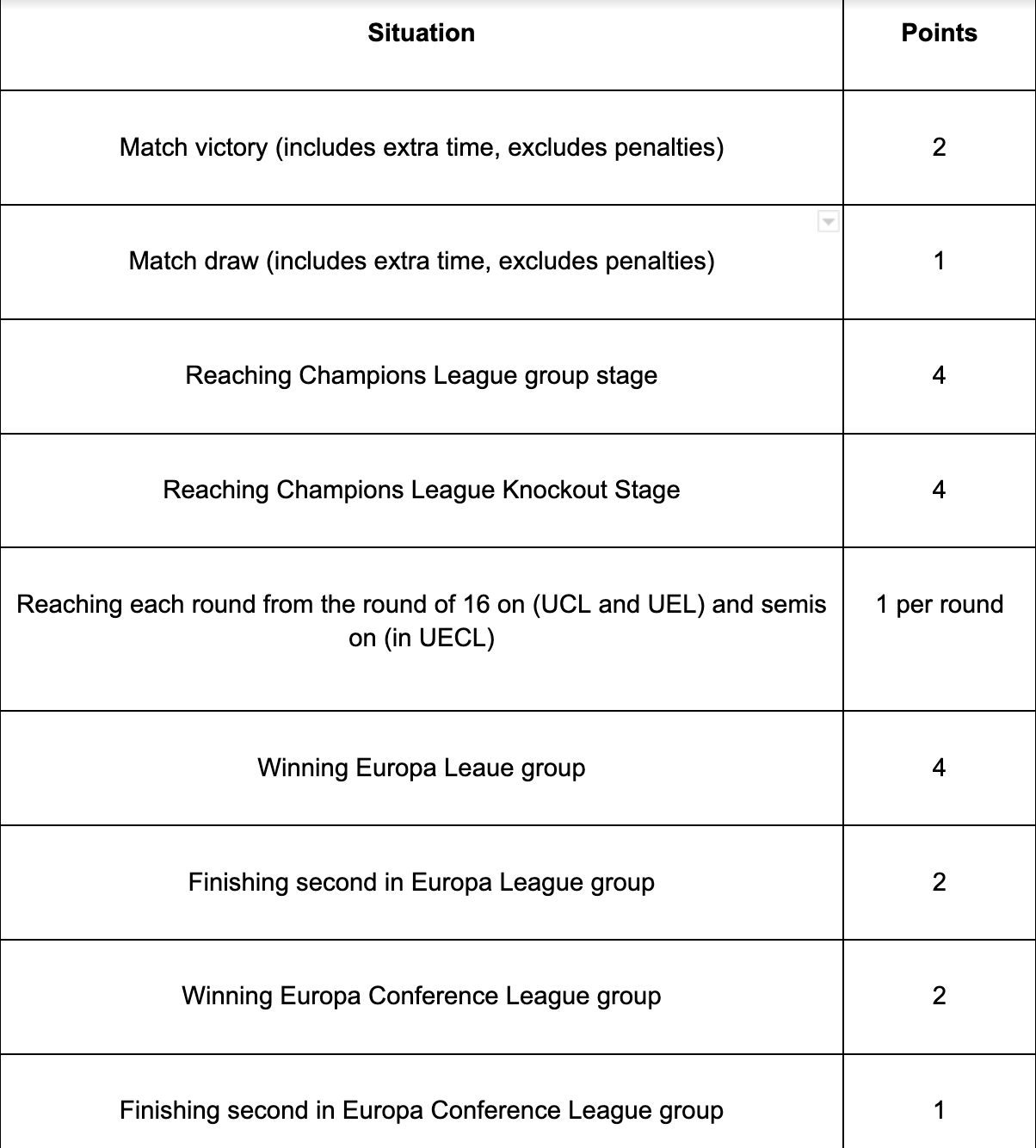 In addition to this, teams that reach the Europa League group stage earns a minimum of three points. This is not added to the match points, as this is only a guaranteed bonus should the club earn less than three points based on performance. The same principle applies to the Conference League at the same round, but only two and a half points are assured.

Lastly, for teams that lose in the Conference League qualifying rounds, they receive points in the event of elimination. This does not apply for sides that lose in qualifying for the other club competitions since they still have a chance in the lower competition. The table below highlights the points given in each round. 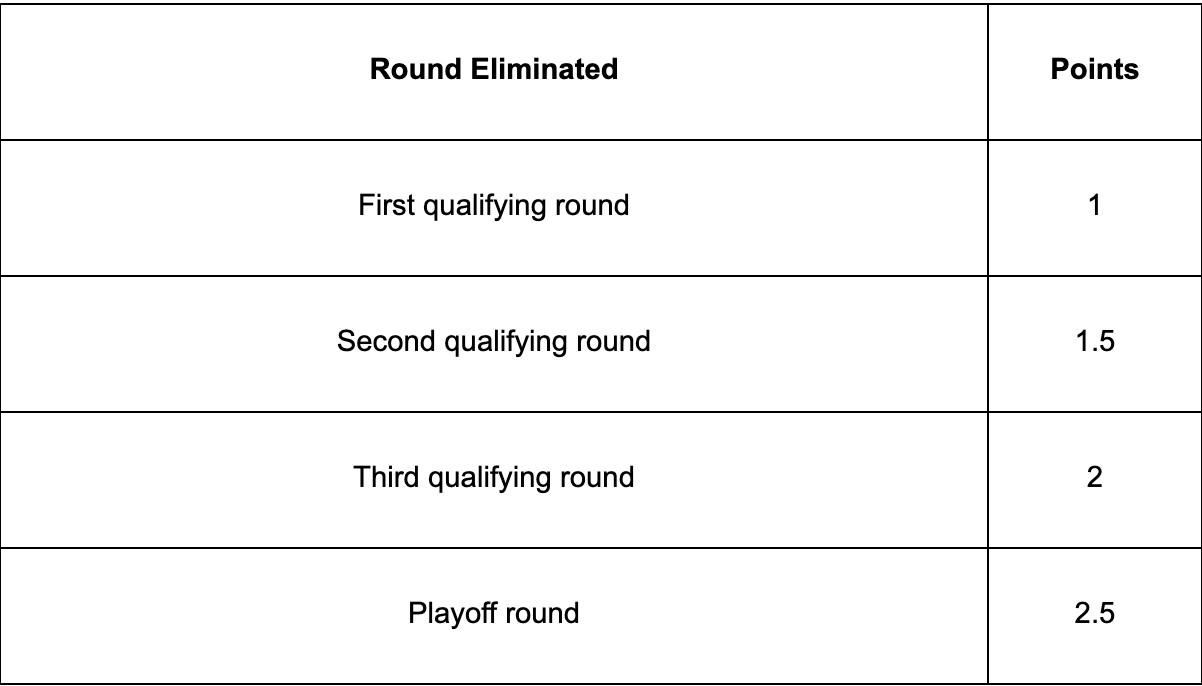 So, what is the importance of these coefficient points for clubs? It is used for seeding for the qualifying rounds and group stage. Bar some exceptions, clubs are seeded depending on their club coefficient.

Typically, half of the clubs involved in a qualifying round are seeded while the other half are unseeded. Of course, the more points a team has, the better, thereby allowing them for arguably more favourable opposition in qualifying.

As for the group stage, teams are placed in pots depending on their club coefficient. The eight highest-ranked teams (nine from the 2024-25 season) are in seeding pot 1, with the next eight in pot 2, and so on. The exception to this is in the Champions League group stage, where pot 1 is already fixed.

Instead, the domestic champions from the top six national associations (excluding the Champions League and Europa League winners) are placed in pot 1. They are joined by the UCL and UEL title holders. The other three pots are compiled as previously mentioned.

Outside of that, the Conference League winner is also placed in pot 1 in the Europa League group stage, should they end up in that competition (they can still make the Champions League via domestic performance).

The country coefficient is quite different from its club equivalent and involves some more math. For the exception of the points given to teams defeated in the UECL qualifiers and the minimum points for sides in the UEL and UECL group stage, all of the match and bonus points mentioned above are considered in the country coefficient.

NA coefficients are also awarded for countries for their respective teams’ performance in qualifying. A win earns one point while a draw results in half a point. Similarly, match points are also considered for the knockout round playoffs for both the UEL and UECL, at two for a win and one for a draw.

That is all well and good. However, there is one catch. For the NA coefficients, everything I just pointed out is portioned out to the country. So, those four points the clubs get for making the UCL group stage? The country only gets a part of that.

In essence, the points these national associations receive are the average of their clubs’ performance in Europe for that season. That is, all the coefficient points awarded in the various ways mentioned throughout the article that apply to the countries? They are divided by the number of clubs that participated in Europe representing the country in question.

To understand better, let’s use England as an example. England receives seven spots in Europe via domestic performance. Therefore, all points accrued by their clubs are divided by seven. Those four points (for each team) by making the Champions League group stage? Divided by seven. Does an English club win a match? One-seventh of that. This idea applies to all countries for their clubs.

Here is a calculation of how many points a country gets depending on how many clubs they have in Europe, rounded (downward) to the nearest thousandth: 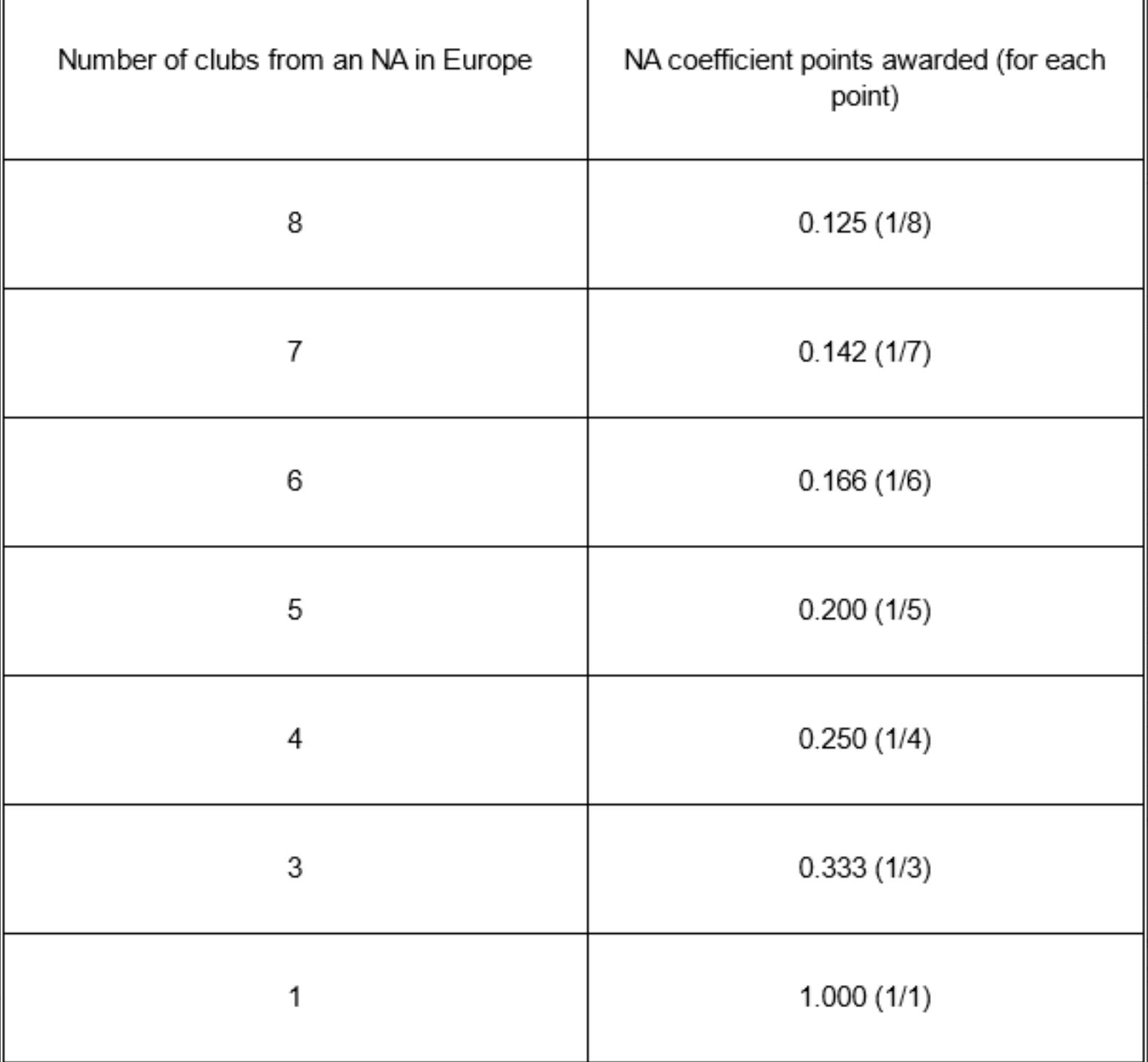 What is the significance of all of this? This is two-fold. There are some teams that have never competed in Europe before, or if they have, it has been a long time. Moreover, there are sides that have competed in continental competitions but did not perform as well.

To illustrate this, let’s use Gil Vicente, who will represent Portugal in the Europa Conference League this upcoming season. This is the team’s first-ever foray into a European club competition, meaning they do not have their own coefficient.

Consequently, they will have a 10.676 coefficient to use for the qualifying round(s) and group stage draw, should they make the latter. This is 20% of Portugal’s points total at the conclusion of the 2021-22 season.

West Ham, who will also partake in the Europa Conference League, earned 21.000 points for making the Europa League semifinals last campaign. They did not compete in Europe during the other four seasons. Thus, they will use a coefficient of 21.328, which is 20% of England’s NA coefficient, for the playoff round draw (and group stage, should they make it). 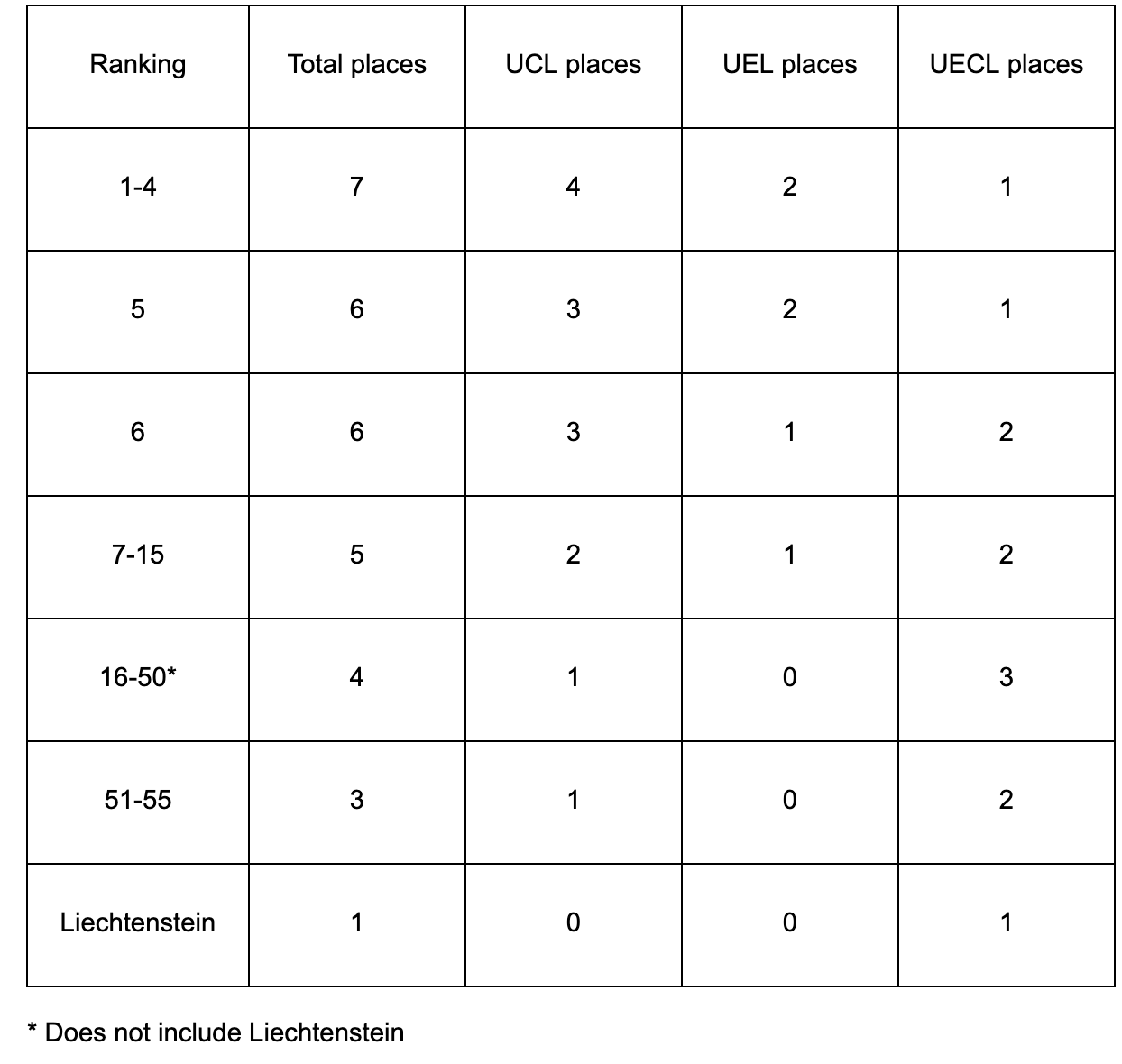 It is worth noting that this table changes slightly depending on who wins the UCL, UEL and UECL and their domestic performance. Countries that are banned (currently the case for Russian clubs) also impact the list. For an idea of what this actually looks like, this is the access list for the upcoming European campaign.

Overall, for both club and country coefficients, the aim is to better what was done four seasons ago. Why? This is because as a new season approach, the points from four seasons back are wiped off the board. For instance, at the end of the 2021-22 season leading into the upcoming one, the points from 2017-18 are no longer considered for the 2022-23 coefficient ranking.

So that is the breakdown on how club and country coefficient points are calculated. While there will be some changes in the calculation for the 2024-25 competitions, sources say these adjustments will not be massive. In the meantime, this is the blueprint as to how the coefficients are calculated, becoming all the more significant for 2024.