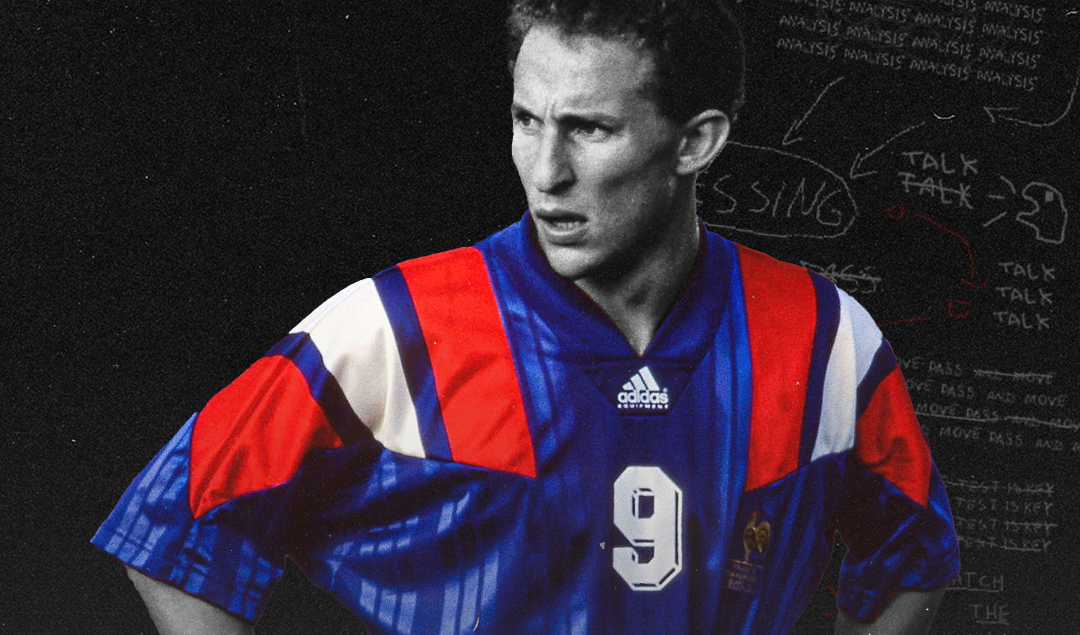 A new transitional period followed that saw the French national team fail to qualify for the 1988 Euros and the 1990 World Cup. This period, however, saw developments behind the scenes that would impact world football to this day. The Clairefontaine academy, which cost 104 million francs to produce, was inaugurated in 1988 and a new crop of young players like Jean-Pierre Papin, Eric Cantona, Laurent Blanc and Didier Deschamps were introduced to the national team by manager Michel Platini.

Sadly, it did not immediately show results, France exiting the 1992 Euros in the group stage, prompting Platini to resign. Gerard Houllier stepped up from assistant to team principal as the nation looked to qualify for the 1994 World Cup. Losses against Bulgaria and Israel meant that the final group game would decide who would go to the US.

In a cagey match, France and Bulgaria were locked in a 1-1 draw and with time running out David Ginola was expected to run down the clock as he received the ball near the corner flag. He instead attempted a cross for Cantona, which was intercepted and used by the Bulgarians to surprise France on the counter, ultimately scoring.

The fallout was massive, Houllier stepped down and Ginola left for England after being harshly criticized and ridiculed. In 2011 news became known, that two of the Bulgarian players, including the goalscorer, had crossed illegally into France for that fateful game. Just as Platini emerged as the national team were in dire need of a new golden era, Zinedine Zidane made his debut alongside Lilian Thuram under manager Aime Jacquet.

In the Euro 1996 qualifiers, they finished second behind Romania, which was still sufficient to ensure qualification. Cantona had been banned throughout the qualification because of his infamous Kung Fu kick and manager Jacquet preferred not to call him up for the final tournament, wanting to keep the same lineup. This proved unwise, as France drew both of their knockout games, exiting the tournament on penalties in the semifinals against the Czechs.

The crowning moment of French football would come in 1998 on home soil. Being exempt from qualifying meant that they played a number of friendlies in order to be prepared for a tournament where the expectations of a whole nation would rest on their shoulders. In these friendlies, a new crop of players emerged, including the likes of Patrick Vieira, Robert Pires, David Trezeguet and, of course, Thierry Henry.

At the World Cup, they won all three group games and a Laurent Blanc Golden Goal in the round of 16 against Paraguay meant that they would face Italy in the quarters. It came down to a penalty shootout, which the French won 4-3, before meeting Croatia in the semifinals. Just like in 2022 Croatia had punched well above their weight and opened the scoring but could not stop France from scoring two goals and reaching the final.

Zidane’s masterclass during the game and Ronaldo’s famous convulsive episode before the final meant that France ran out 3-0 winners and 60 million French citizens were absolutely ecstatic. France kept their status as the best team in the world, winning the 2000 Euros in Belgium and the Netherlands.

Despite finishing second in their group, behind the Netherlands, they won the tournament with three 2-1 wins in the knockouts against Spain, Portugal and Italy, the latter two being decided by Golden Goals. With the 2001 Confederations Cup win, France completed the international treble and were on top of the world. Surely, nothing bad could happen to this wonderful team. They would probably dominate international football for years to come.

Brazil’s Summer of 1998: Defending Champions, Favourites and the Best Forward in the World

The wake-up call suffered by France at the 2002 World Cup was as rough as they come. At a tournament that was mired in controversy and produced its fair share of upsets, France was eliminated in the group stage. The World, European and Confederations champions failed to score in their three group games and defeat to Senegal and Denmark and a draw against Uruguay saw the fly home, tails firmly tucked between their legs.

The 2004 Euros was prepared by a managerial change and with a fully fit squad, France won their group. The highlight game was a 2-1 win against England, with Zidane scoring two goals after the 90th minute. Another shock would happen regarding both the French and the wider footballing world, as Greece knocked out France and went all the way to snatch the trophy in Portugal.

Another managerial change saw Raymond Domenech take charge and begin the qualification process for the 2006 World Cup. After some initial struggles, some older and more experienced players returned to the squad, which saw them qualify for the final tournament. With a vintage side, France finished second in their group behind Switzerland and Spain awaited in the round of 16.

A 3-1 win saw France progress to a quarterfinal tie against Brazil. Zinedine Zidane ran the whole game and can be counted as one of the very few players to out-dribble the Brazilians. The quarters and the semis were both dispatched with 1-0 wins, Henry scoring against Brazil and Zidane against Portugal, who would meet the country of his old employers, Italy. The Italians had been, maybe foolishly, dismissed, having been rocked by the Calciopoli scandal, but nonetheless, they were a quality side.

In a final that made me bawl my eyes out Zidane’s France scored first, through the maestro himself, only to concede via Materazzi. The Italian would be at the epicenter of another crucial moment of the game taunting Zidane, which prompted the Frenchman to head-butt him and be shown a red card. Without its talisman, the French team succumbed to a penalty defeat and Zidane’s illustrious career came to an acrimonious end.

Just like after Platini’s retirement, France seemed to go on a downward spiral after without its most important player. The 2008 Euros would mark a new low with a draw against Romania and losses against Italy and the Netherlands seeing France exit that tournament’s “Group of Death” in last place. The FFF decided in a meeting to retain their confidence in Domenech, despite public calls for Didier Deschamps to be considered for the job.

Brazil’s Summer of 1998: The Final, Confusion and Chaos

Controversy would continue to plague the squad. The qualifiers for the 2010 World Cup got off to a rocky start and at the end of them, France went into the playoffs. During the second leg tie against the Republic of Ireland, Henry’s infamous handball saw the French progress to the final tournament where all hell would break loose.

After drawing with Uruguay, they saw themselves losing to Mexico in the second game. At halftime, Nicolas Anelka clashed with manager Raymond Domenech and after the FA called the latter and Evra in for a meeting, the decision was made to send Anelka home. Patrice Evra subsequently got into a scuffle with coach Robert Duverne and the team cancelled the training session.

The team’s managing director resigned and the players, with Domenech in charge, criticized the FA for sending Anelka home, whilst the FA condemned the team’s antics. With such a climate of outrage, a defeat against South Africa was almost inevitable and France went home last in their group once again. Domenech left the team; the director of the federation resigned and new manager Laurent Blanc announced a clean slate for the players at the heart of the controversy and promised a fresh start for the national team.

Blanc’s reign would ultimately be a short one, with shaky performances in the Euro 2012 qualifiers and a quarter-final exit at the final tournament at the hands of Spain, earning him the sack. Didier Deschamps was named as the new manager, but the team needed another playoff win to qualify for the 2014 World Cup. In Brazil, the team fared a little bit better, managing to reach the quarterfinals, where eventual winners Germany knocked them out.

Despite this exit, a new dawn was fast approaching with a new star, Paul Pogba, being named Young Player of the Tournament in 2014. France were granted the hosting rights to another tournament and gave an extremely good account of themselves, reaching the final. However, the fairytale would not have a happy ending, with the hosts not being able to win a tournament on home soil for a third consecutive time, due to a late goal in the final by Portugal.

The upwards trajectory was there for all to see and the squad was beginning to take the shape that would lead them to victory two years later in Russia. At the postponed Euro 2020 Switzerland shocked the world by eliminating the World Cup champions on penalties but France seems to become a bigger and bigger monster as the years go by. The obscene amount of depth they have meant that with a number of high-profile injuries, they still managed to reach the 2022 final. A bright future seems to be on the horizon for France as we head into the Euro 2024 qualifiers.