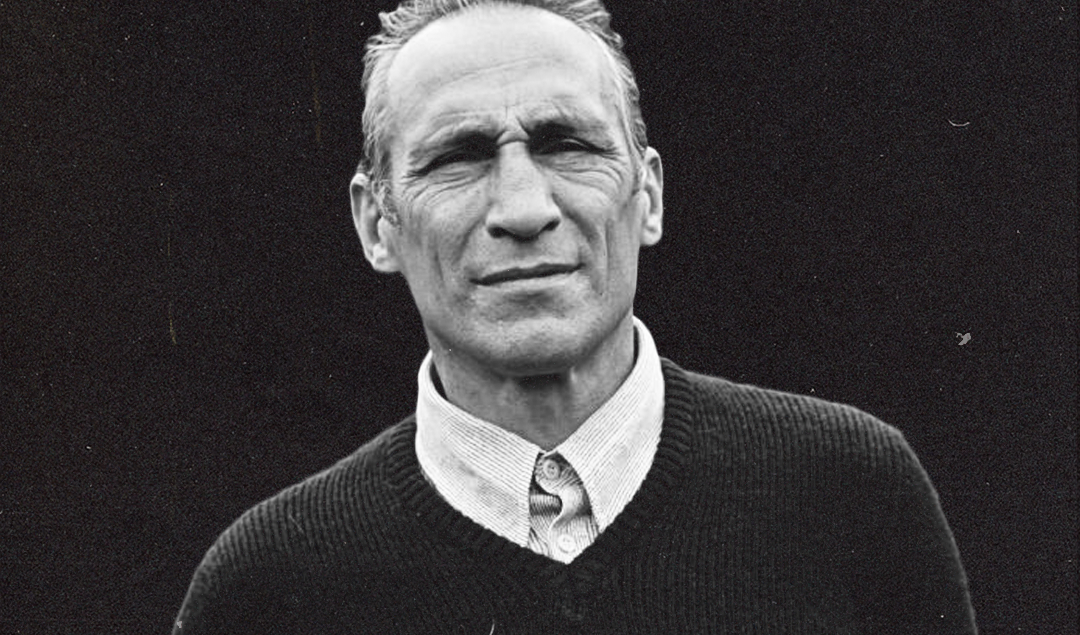 Not only did an era end when Italy were eliminated from the group stage at the 1974 FIFA World Cup, but the Italians also suffered a blow in the battle of football ideologies.

Catenaccio was still the prevalent tactic of choice for many Italian teams of that epoch, but the tournament played in West Germany that year witnessed the rise of Total Football. Change was needed in the national team if Italy was going to win its first World Cup since 1938, and those decisions eventually culminated in the Azzurri triumphing in 1982 under manager Enzo Bearzot.

Nicknamed “Vecio,” meaning “the old one” in the Veneto dialect, Bearzot coached the Italian national team from 1975 until 1986, nurturing a team of young players that eventually formed the nucleus of the side for a decade. He probably kept the spine together for longer than needed, out of gratitude for their heroics at España ’82.

Bearzot was born on September 26, 1927 in Aiello del Friuli, a town in the Friuli-Venezia Giulia region in northern Italy, and enjoyed a respectable playing career as a defensive midfielder. After starting at Pro Gorizia in 1946, he then had two spells at Inter, three seasons at Catania, and two spells at Torino, before retiring in 1964. He also earned a sole cap for Italy in 1955, during his first spell at Torino. 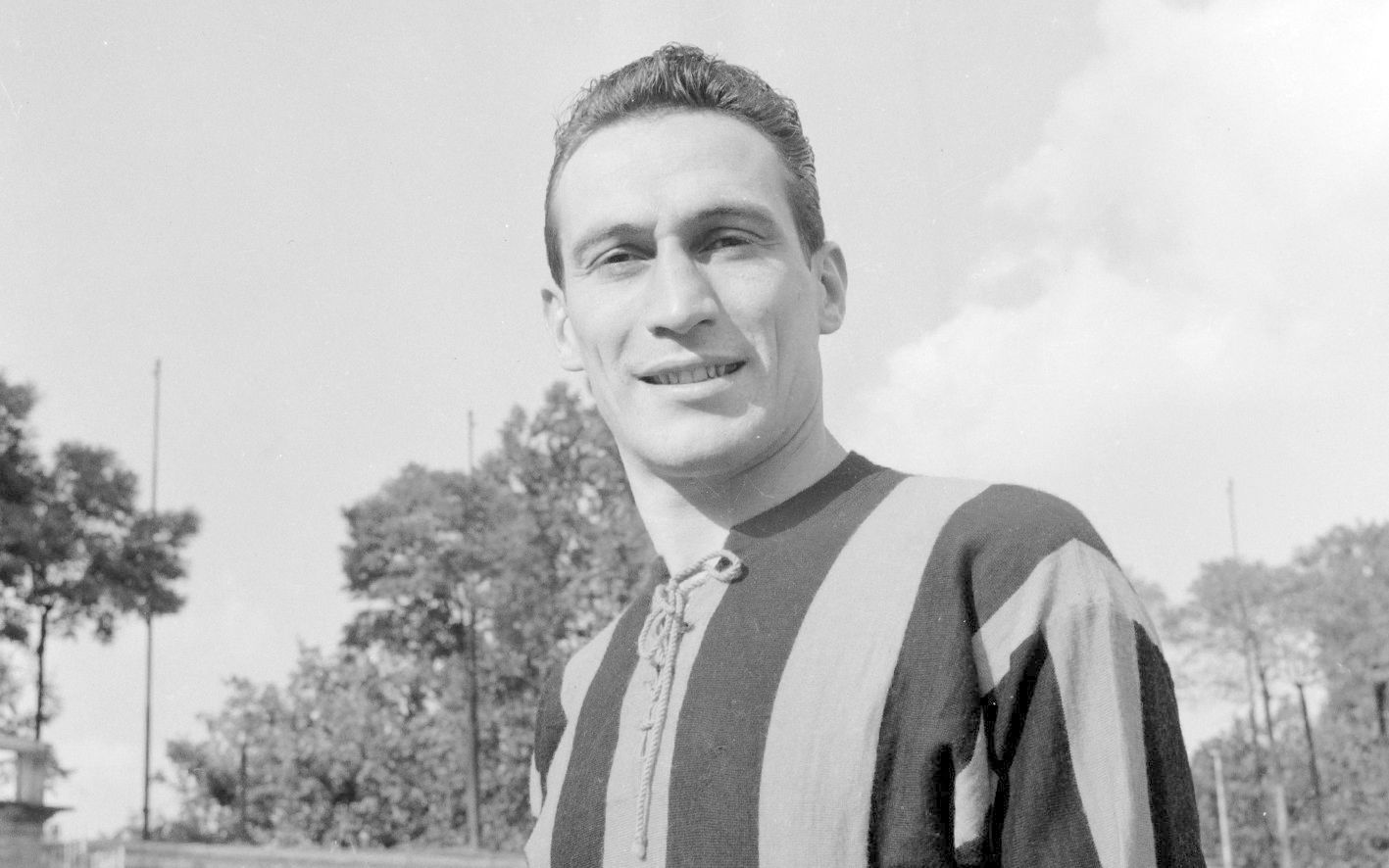 Although he went on to coach the Azzurri for 11 years, he did not actually take over straight after the 1974 World Cup. FIGC president Artemio Franchi replaced Ferruccio Valcareggi with Fulvio Bernardini, while Bearzot remained in charge of the Italy Under-23 side, the equivalent of the U-21s in that era.

Despite being 14 years older than his predecessor, Bernardini had a more modern approach to football. Italy had an abundance of attacking talent under Valcareggi and occasionally displayed that attacking prowess, but for the most part, he was a defensive-minded coach who relied on Catenaccio.

Bernardini, on the other hand, moved away from that approach. When Fiorentina won their first Serie A title in 1955/56, they boasted a squad capable of resolute defending and swift attacking, but the Viola reached the 1957 European Cup Final with its own variation of Catenaccio, before losing 2-0 to Real Madrid.

His Bologna side that won the Scudetto in 1963/64 played a more open and proactive type of football, though. After the Felsinei humiliated local rivals Modena 7-1 in a match during the 1962/63 Serie A season, he claimed that his side played “football made in heaven.” 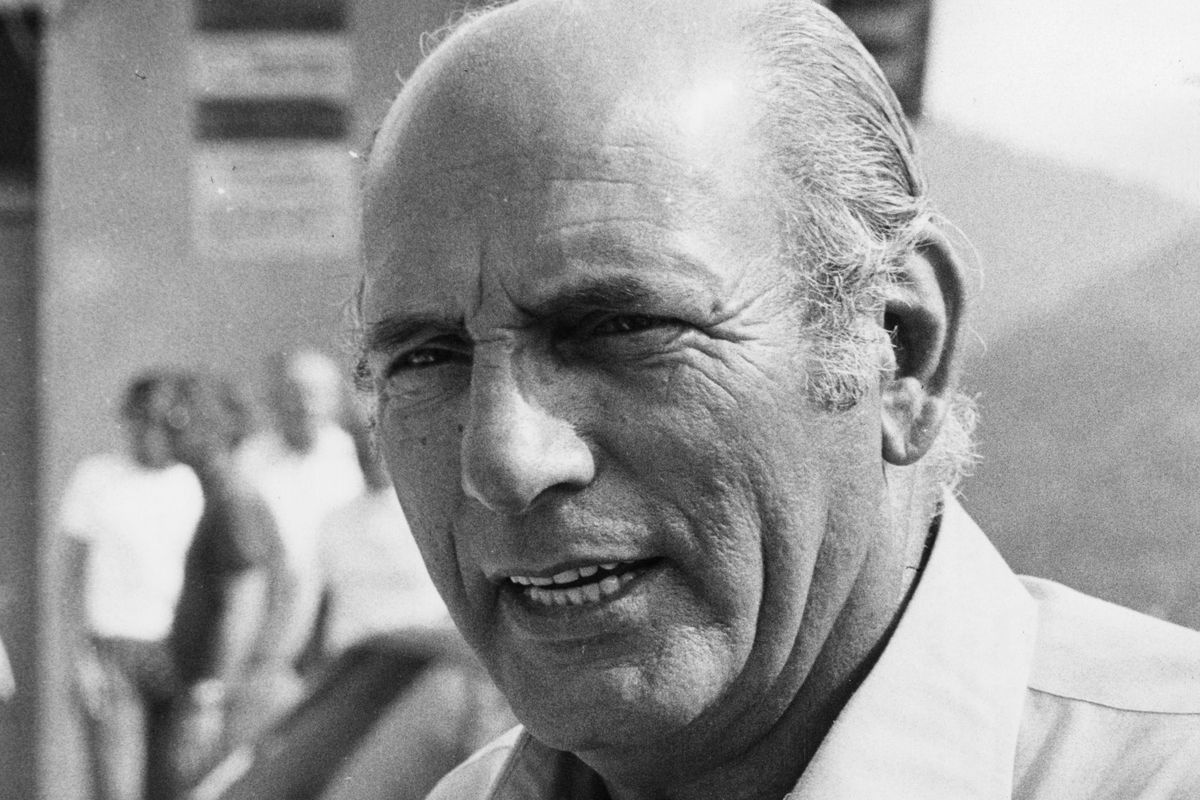 He hadn’t coached since he left Sampdoria in 1971 but his football style was exactly what Franchi was looking for. Italy were drawn in the same qualifying group with the Netherlands, Poland, and Finland for the 1976 European Championship, and Bernadini decided to completely overhaul the side. Gone were the iconic number 10s Sandro Mazzola and Gianni Rivera, the prolific Luigi Riva, and defensive stalwart Tarcisio Burgnich, but the Inter left-back Giacinto Facchetti remained as captain.

Napoli midfielder Andrea Orlandini and Fiorentina playmaker Giancarlo Antognoni made their debuts in the 3-1 defeat to the Dutch in Rotterdam. Orlandini struggled to man-mark Johan Cruyff, who scored twice for the Oranje, and he only played two more times for Italy. Meanwhile, Antognoni had a goal from a splendid chip disallowed, but he would go on to become one of the key components of Bearzot’s team.

In their next competitive fixture, the Azzurri drew 0-0 at home against Poland in April 1975. Another two future stars made their international debuts in the Group 5 qualifier for Euro ’76; Juventus right back Claudio Gentile and Torino centre forward Francesco Graziani. 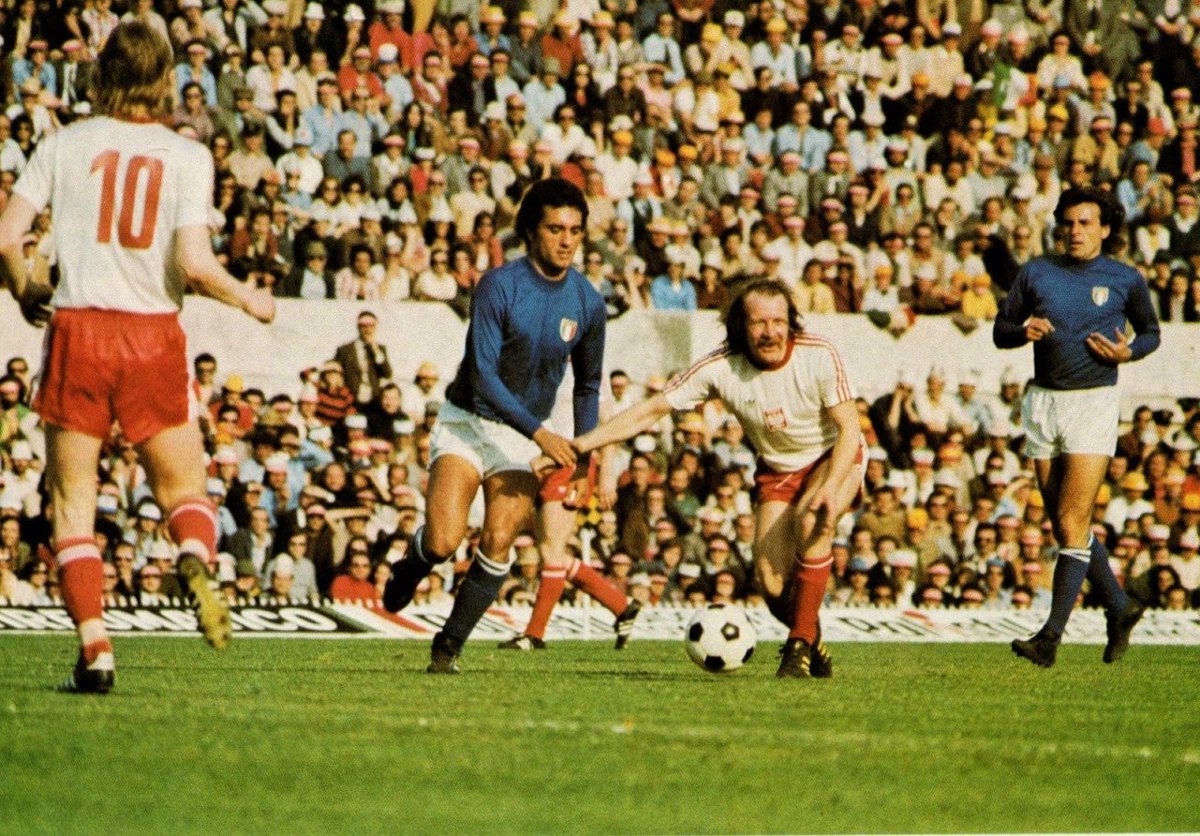 Signs of progress weren’t evident by the summer of 1975, and Bernardini had won just once in six games, a 1-0 victory against Finland in the Euro qualifiers. It was decided that Bernardini would remain as the director of the national teams, and Bearzot would be installed as technical commissioner. Essentially, Italy was co-coached.

Bearzot’s first official game in September of that year ended in a 0-0 draw against Finland and he picked up his first win in his third game in charge, but the 1-0 victory against the Netherlands was not enough for the Azzurri to qualify out of the group. The Dutch qualified thanks to a better goal difference than Poland, with Italy trailing both nations by a point.

Despite the failure to qualify for the European Championship, the victory against the Oranje was the start of four consecutive wins under the new coaching tandem. More significant debuts for the national team soon followed; Juventus sweeper Gaetano Scirea earned his cap in a 3-2 win against Greece in December 1975, while his club teammate Marco Tardelli made his debut in a 3-1 win against Portugal in April 1976. Oddly, Tardelli was used as a right back in the early stages of his international career.

Italy fared poorly in the 1976 USA Bicentennial Cup, winning once and losing the other two games. After that tournament in May, the Azzurri won 4-2 against Romania in a friendly in Milan in the following month. By this stage, the media pressure was getting to Bernardini, and he blasted to the press after the game, “You are all assassins!” 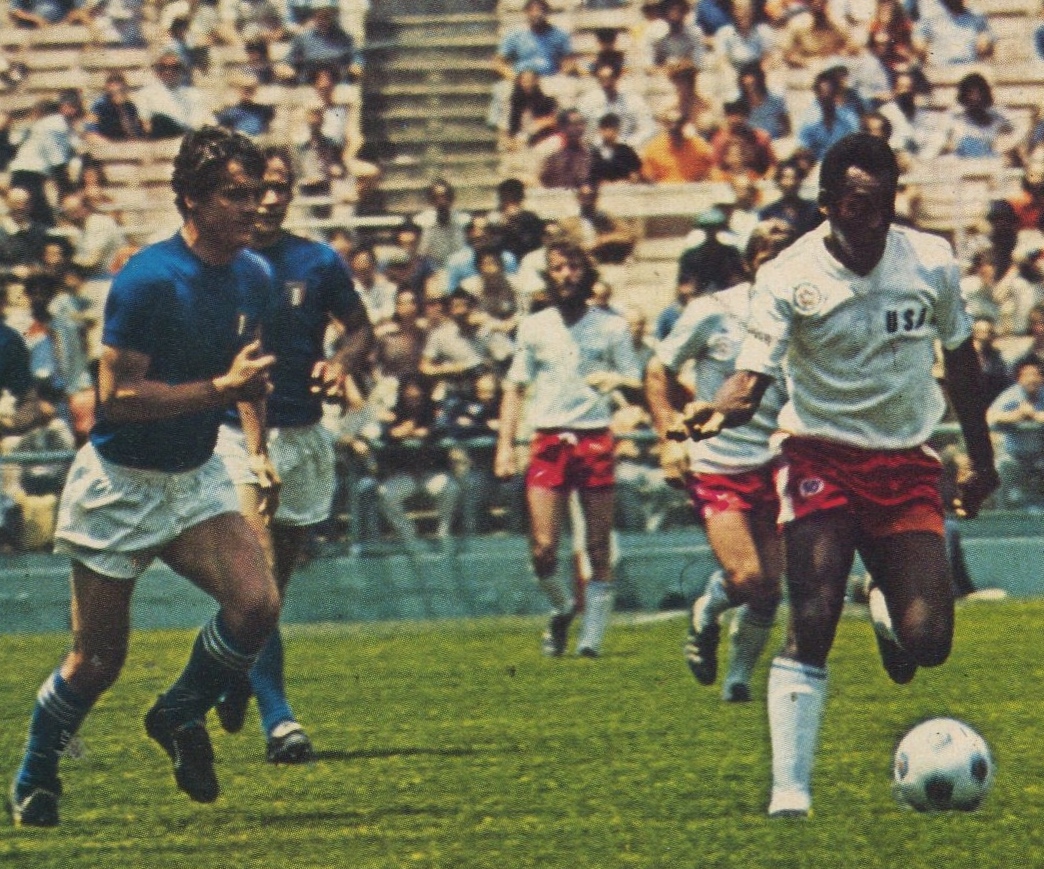 The coaching duo of Bearzot and Bernardini remained for the time being, and the squad continued evolving during the qualifiers for the 1978 World Cup in Argentina. Italy were drawn with England, Finland, and Luxembourg, and won their first two Group 2 qualifiers; 4-1 away to the Red Lions in October 1976 and then 2-0 at home against the Three Lions in November.

The international calendar was less congested for Italy in 1977, but the focus on the World Cup qualifiers remained. The Azzurri won 3-0 away to Finland in June – which was the last match of the Bernardini and Bearzot tandem – and then humiliated the Finns 6-1 in October, with Juventus forward Roberto Bettega scoring four times.

They did lose their only qualifier in November 2-0 away to England – it was also the 94th and final appearance for Giacinto Facchetti with the national team, which was a record then – but they sealed qualification in December with a 3-0 win at home to Luxembourg. Italy and England had both won five games and lost one, but the Italians progressed due to a superior goal difference.

Italy played two friendlies against Belgium in 1977; a 2-1 win in Rome in January and a 1-0 victory in Liège in December. The Red Devils were building a squad for a golden era of their own, but the friendly in Belgium will be remembered for the debut of Lanerossi Vicenza striker Paolo Rossi. He had been the leading goalscorer in Serie B in 1976/77 with 21 goals, and he maintained his sparkling form for the Veneto club in Serie A.

The Azzurri were drawn in Group 1 with hosts Argentina, France, and Hungary and their World Cup group games alternated between Estadio José María Minella in Mar del Plata and Estadio Monumental in Buenos Aires. Prior to the tournament, the Azzurri had not won a single game in 1978, losing 2-1 to Spain and then drawing to France and Yugoslavia in friendlies.

That form looked likely to continue the opening game as France took the lead in less than a minute thanks to Didier Six, but goals from Rossi and Renato Zaccarelli earned Italy the three points. This game also bore witness to the international debut of Juventus left back Antonio Cabrini, who had established himself at club level late in the league season but became one of the World Cup’s revelations with his attacking runs from left-back.

The Azzurri faced Hungary in the next game and won comprehensively. Rossi, Bettega, and Romeo Benetti gave the Italians a comfortable lead, and a late penalty from András Tóth was no more than a consolation goal.

Beazrot kept his full-strength side against Argentina in Buenos Aires, and Italy went on the attack for the first 10 minutes. An injury to Mauro Bellugi forced Bearzot to move Gentile to centre-back, whilst Antonello Cuccureddu came on to play at right-back. The Italians decided to play defensively, and Argentina struggled to break them down.

Then in the 67th minute, Italy scored the only goal of the game with a wonderful team goal. Benetti threw the ball in and Rossi received the ball on the left-wing. He had trouble shrugging off a defender, so he passed the ball to Antognoni and made a run towards the edge of the penalty area. Antognoni passed to Bettega who then found Rossi, who back-heeled the ball into his path, before the grey-haired forward struck the ball low past Argentine goalkeeper Ubaldo Fillol.

For the second group stage, Italy was drawn in Group A with the Netherlands and West Germany – the finalists of the 1974 edition – as well as Austria. The Azzurri were held to a 0-0 draw against the West Germans, but Bettega squandered several chances to win the game on his own. They managed a victory against Austria as Rossi scored the solitary goal, but signs of fatigue were showing. 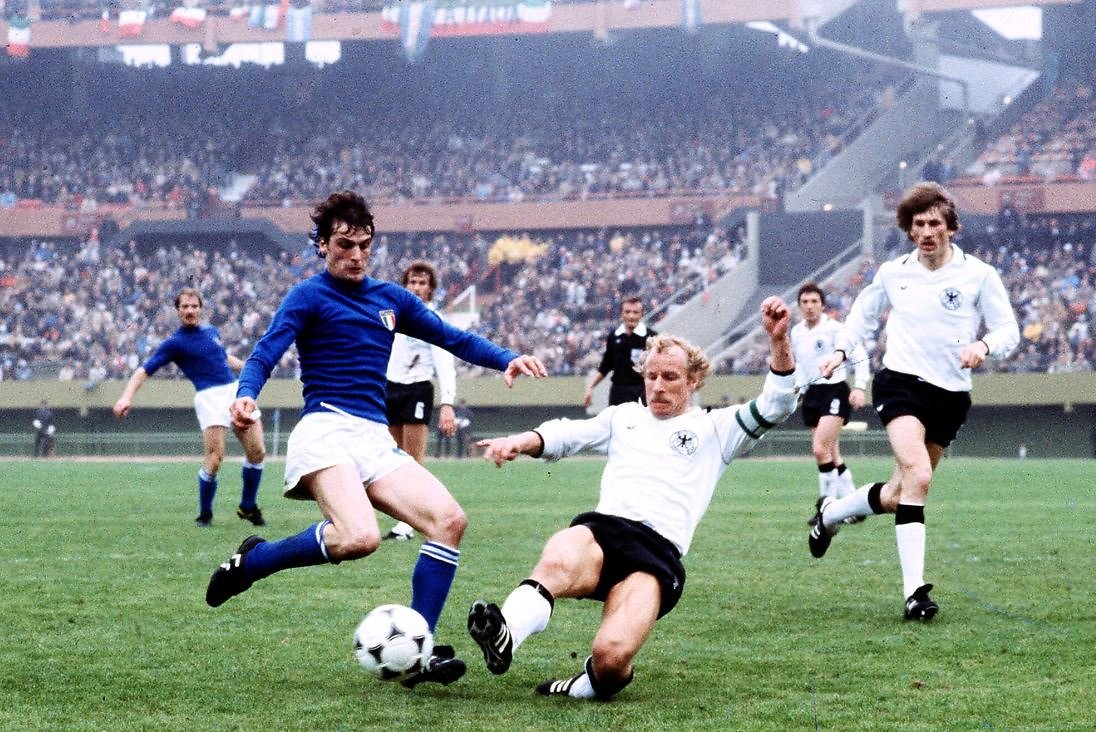 The Azzurri needed a win against the Dutch to reach the final, and it seemed they were on their way to three points at half-time. Italy led 1-0 thanks to an Ernie Brandts own goal, but Bearzot surprisingly took off star winger Franco Causio. The move backfired as the Oranje came back and won 2-1 thanks to two spectacular goals from long range, one from the aforementioned Brandts and the other from Arie Haan. Legendary goalkeeper Dino Zoff was seen as the scapegoat for his inability to deal with the shots.

Italy then lost 2-1 to Brazil in the Third Place Play-Off with Causio scoring for the European side in the first half, but Zoff’s inability to deal with long-range efforts was exposed again in the second thanks to a swerving shot from Brazilian right-back Nelinho and a volley outside of the area from Dirceu.

The Azzurri might not have been able to have broken a 40-year drought, but it was a much-improved performance from four years earlier. Cabrini won the FIFA World Cup Best Young Player Award, Scirea impressed in the sweeper role after Facchetti sustained an injury months earlier, and Rossi impressed with his three goals as well as his all-round attacking play, earning the nickname “Pablito,” meaning “Little Paul” in Spanish.

However, for Bearzot, Rossi, and Italian football in general, things would get worse before they got better.