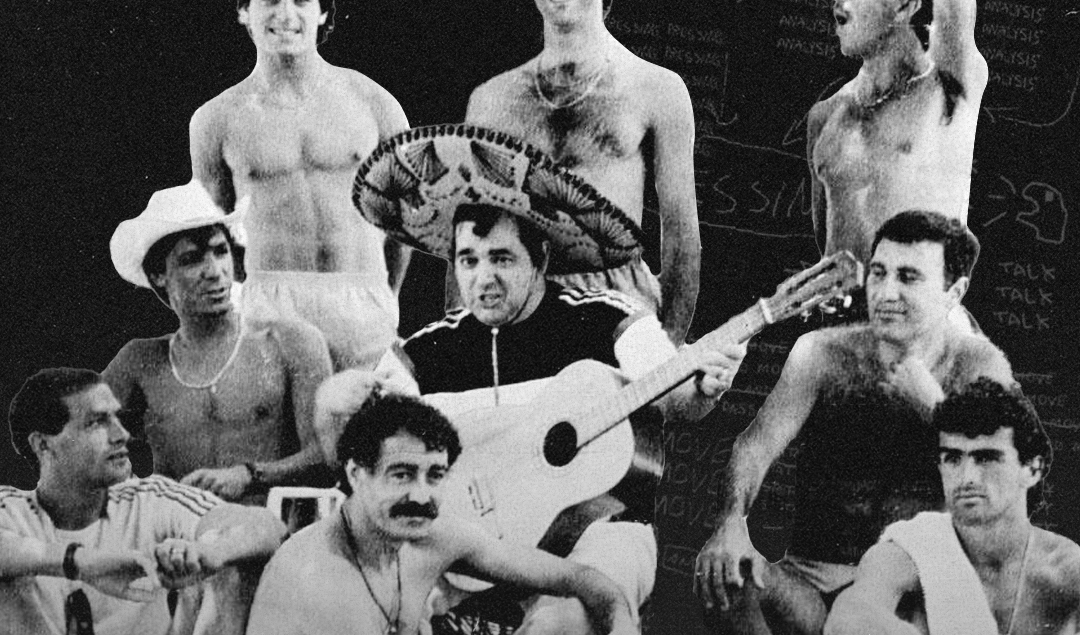 Portugal’s preparations for the 1986 World Cup had so far been a shambles. An incorrect doping test, poor training facilities, unpaid bonuses and inadequate warm up opposition in the form of hotel and bar workers. Such amateur preparations led to growing frustration among the players and it all came to a head on the 25th May, less than two weeks since their arrival in Mexico.

37-year-old Manuel Bento, captain of the national team, represented the players in a press conference attended by national and international media. Bento announced if the squad did not have their bonuses increased, as well as receive the share of the unpaid advertising revenue, the players would not take part in any more warm up games and threatened to strike by not training. 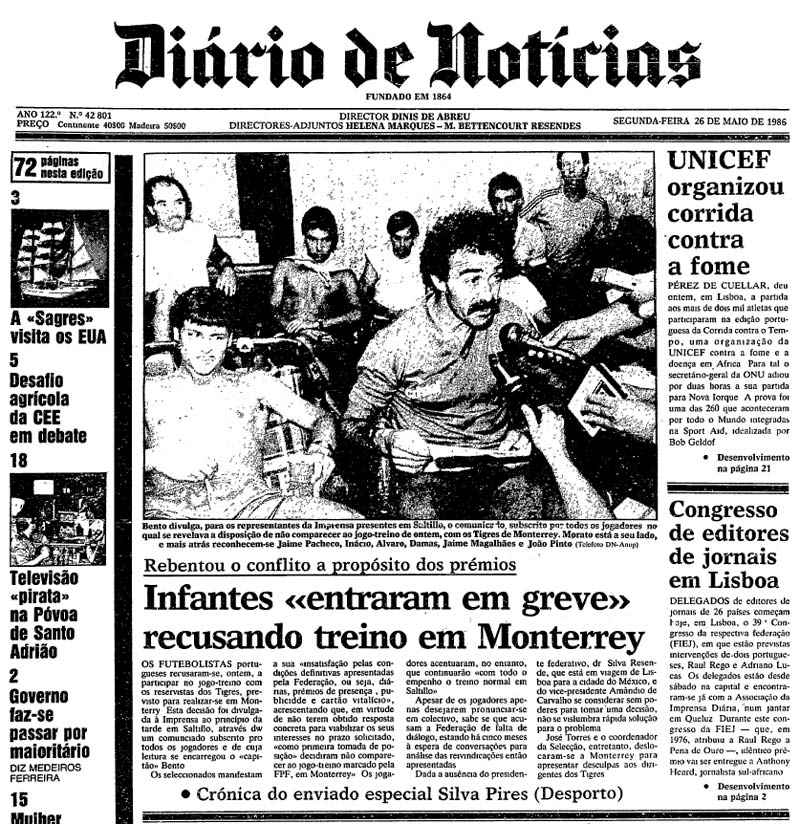 The squad’s cause wasn’t helped by lurid stories of players going to and hosting private parties filled with attractive women – problematic as a few of the squad members were married. What made it worse was the inability of Torres and his coaching staff to stop such partying more akin to a frat house. Once the national press reported on what was happening it elicited the fury of their wives – bombarding their husbands and Portuguese Football Federation (FPF) with calls.

The crisis made waves back in Lisbon. Portugal’s Parliament, the Assembly of the Republic, called for calm among the squad and to moderate their behaviour. Some right wing opposition parties called for the team to be sent home as punishment for embarrassing the country. President Mário Soares merely called for the players to show “common sense” while Prime Minister Cavaco Silva stayed quiet.

Silvio Resende, head of the FPF, was over a thousand kilometers south of Saltillo in Mexico City and unwilling to deal with the players’ grievances. To add to the madness, the squad did train on the sloped field, but did so half naked and wore their clothes inside out to hide the logos of their sponsors.

Despite such dramas in Saltillo, Portugal still had a World Cup to compete in, facing England in their opening game in Monterrey on June 3rd. Coach José Torres would deploy a lone striker in Fernando Gomes, while Diamantino and Carlos Manuel acted as the support from midfield. Playing two midfielders in Jaime Pacheco and António André in front of the back four meant the young Paulo Futre was on the bench.

The game was mostly littered with multiple half chances for both sides, the best chance falling to Gary Lineker, whose effort went past Bento yet the smart positioning of sweeper António Oliveira allowed him to clear it away. Yet it was Portugal that managed to get the all important breakthrough with 15 minutes remaining. Diamantino took advantage of England’s left back Kenny Sansom being too tight on him, quickly skipping past the left back and scampering down the right into the box.

While England’s three defenders of Terry Fenwick, Gary Stevens and Terry Butcher looked towards Diamantino, no one saw Carlos Manuel wide open at the far post. All apart from Diamantino, as the Benfica midfielder’s cross was tucked in by Manuel from close range, celebrating wildly almost as a release of pent up frustration at what had occurred in the weeks leading up to the game. 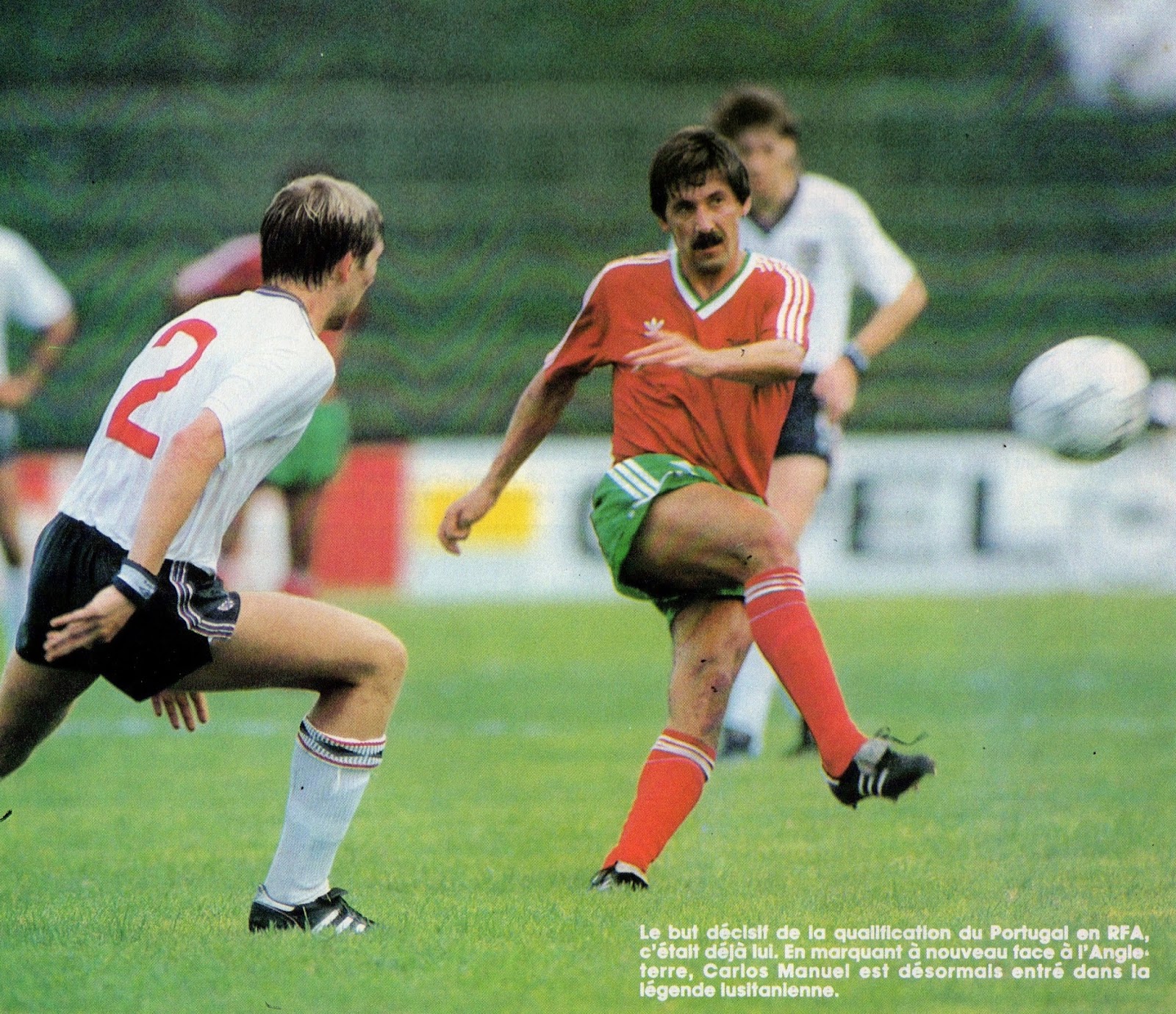 Defeating England, widely seen as the strongest side in the group, was an excellent way to cover up the national team’s transgressions. However, it was also another opportunity for squad members to sneak out of the hotel to continue partying. On the 30th anniversary of Portugal’s 1986 World Cup campaign, Paulo Futre explained to the Lusa News Agency their motivations in beating England:

“We won against the English in anger, but we didn’t do it for Portugal, but against Silva Resende. We had won against the president of the Federation, that was our war. “

With Poland drawing to Morocco, it meant Portugal were top of the group after the first round of games. Their next opponents were Poland in Monterrey on the 7th June. However, such optimistic thoughts would soon be cruelly dashed.

In a training session shortly after beating England, Bento broke his fibula in a collision with a teammate. To lose their captain, a man with over 60 caps, was a terrible blow. His replacement for the game against Poland was 38 year old Vitor Damas – a veteran keeper with 20 years of experience in Portuguese football.

As for Portugal’s opponents, the Poles neared the end of their famed golden generation that had punched above their weight for 12 years. Yet they still packed a punch with veterans such as captain Zbigniew Boniek, goalkeeper Józef Młynarczyk and forward Włodzimierz Smolarek.

Just like in the first game, it was a game of half chances, yielding few clear cut opportunities even when Torres introduced Futre in the second half. Portugal did have the better of the opening stages in the second half, but were made to pay for their lack of penetration on 68 minutes.

Dariusz Dziekanowski clipped the ball into the box towards the path of his fellow striker Smolarek at the far post. Controlling it with his left foot, Smolarek quickly jabbed the ball past the onrushing Damas into the bottom corner. 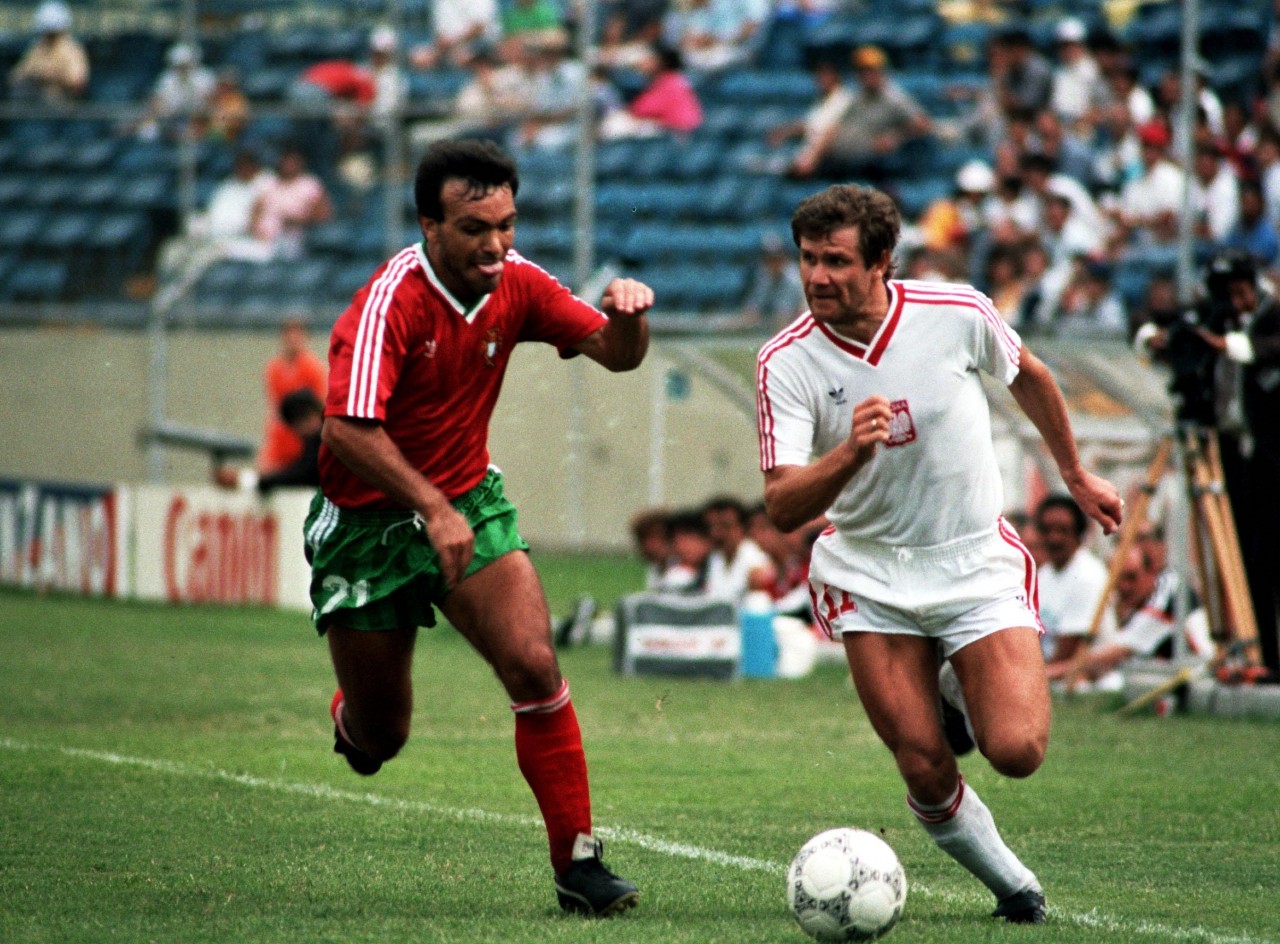 Despite a late rally, Portugal could not find an equaliser, falling to a 1-0 defeat. Morocco’s goalless draw against England in the other fixture meant the group was tight before the last round of games – some critics lambasting it as The Group Of Sleep due to the dullness of the games.

Portugal were second with three points, with their final group game in Guadalajara against Morocco, themselves in third with two points. It was a case of the winner takes all and the loser goes home. The importance of such a fixture had Torres give Futre his first start of the tournament. Despite the high stakes riding on this game, Portugal started the game terribly and were a goal down on 19 minutes.

Midfielder Jaime Pacheco played a sloppy square pass in front of his own box towards Moroccan forward Abderrazak Khairi. Taking two touches with his right foot, Khairi struck the ball with his left from 20 yards out and rifled past Damas into the bottom corner. It was Morocco’s first goal of the tournament and things went from bad to worse for the Portuguese seven minutes later.

Receiving a cross field ball on the right deep into Portugal’s half, Morocco striker Abdelkrim “Krimau” Merry was tightly shadowed by his marker António Oliveira, forcing him to play the ball back to Labid Khalifa.

The Moroccan full back instantly whipped the ball deep into the box. It swung past the Portuguese defenders and Moroccan players in the box, each of them looking at the ball, everyone apart from Khairi. No one had spotted the run of the FAR Rabat forward, who was in position at the far post to smash a fierce volley past Damas.

Less than 30 minutes played and Portugal found themselves two goals down. Stunned at their precarious position, they furiously went on the attack in search of a goal to get back into the game. However, the Atlas Lions weathered the storm, holding off the desperate Portuguese forays into the second half. The death blow for José Torres and his players would come on 62 minutes. 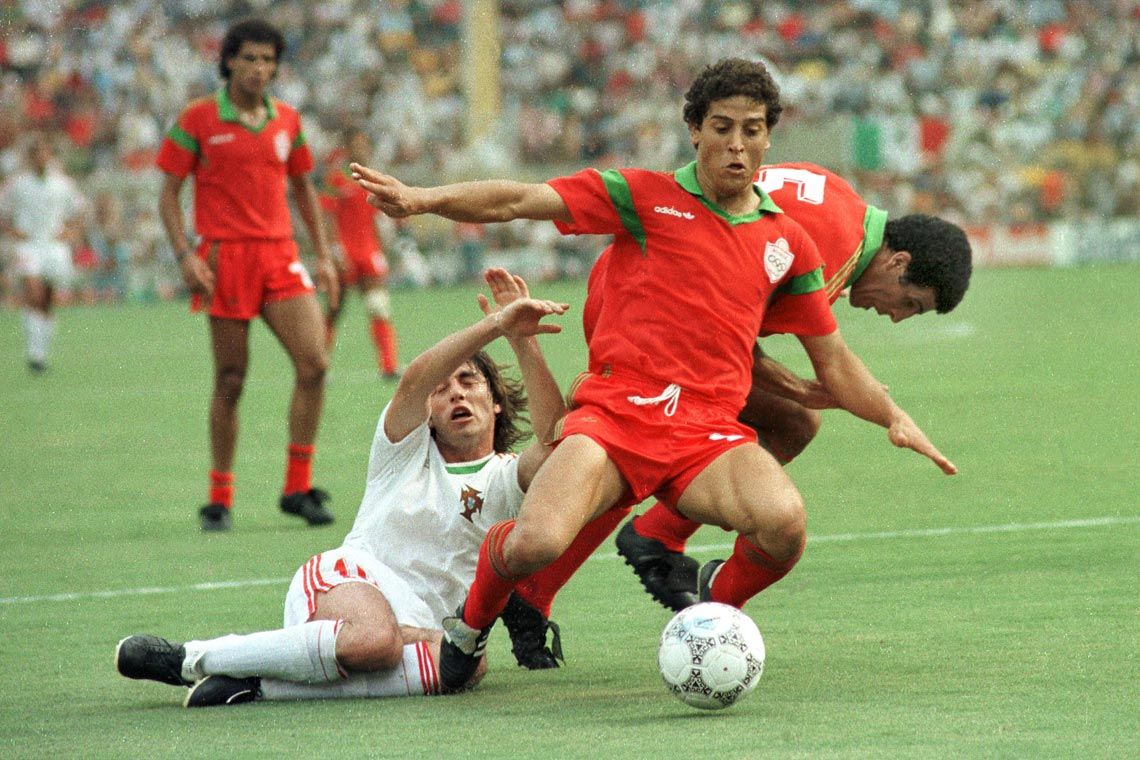 The Moroccans’ patient build up play from the back resulted in nine interrupted passes, from keeper Ezzaki “Zaki” Badou playing the ball to defender Abdelmajid Lamriss, to influential playmaker Mohammed Timoumi playing the killer pass to Krimau who slotted the ball past Damas to make it 3-0. Their defence dismembered by the impressive Atlas Lions, Portugal did manage a consolation goal on 80 minutes through Diamantino.

Yet Portugal had been soundly beaten by Morocco, eliminating them from the World Cup at the bottom of the group, as England had beaten Poland 3-0 to also qualify with group winners Morocco and Poland into the last 16. Jaime Magalhães’ summation to Observador of the squad’s attitude against Morocco encapsulated the disastrous escapades of their World Cup squad:

“Perhaps we thought it would be easier. Maybe it was a lack of respect for Morocco. They had no prestige and that sometimes helps too.”

Worse was to come after the game. The squad would stay in Saltillo for a few more days prior to their departure for home. As a result of their World Cup elimination, Silva Resende arrived to meet the squad, but not because he wanted to. As Futre explained to Lusa, ties between the two parties quickly soured:

“We only saw him when we were eliminated by Morocco, in the third game, in Guadalajara. And we only saw him in Saltillo, where we still stayed three or four more days, because FIFA removed the car that had given him and ‘forced’ him to travel on the bus with the players. Most of the players, if not all, ended up insulting him and it was chaos.”

The entire 1986 World Cup campaign had been a dark chapter for Portuguese football. The national media, as well as the public, was utterly furious at the conduct of the squad in Mexico on and off the field. 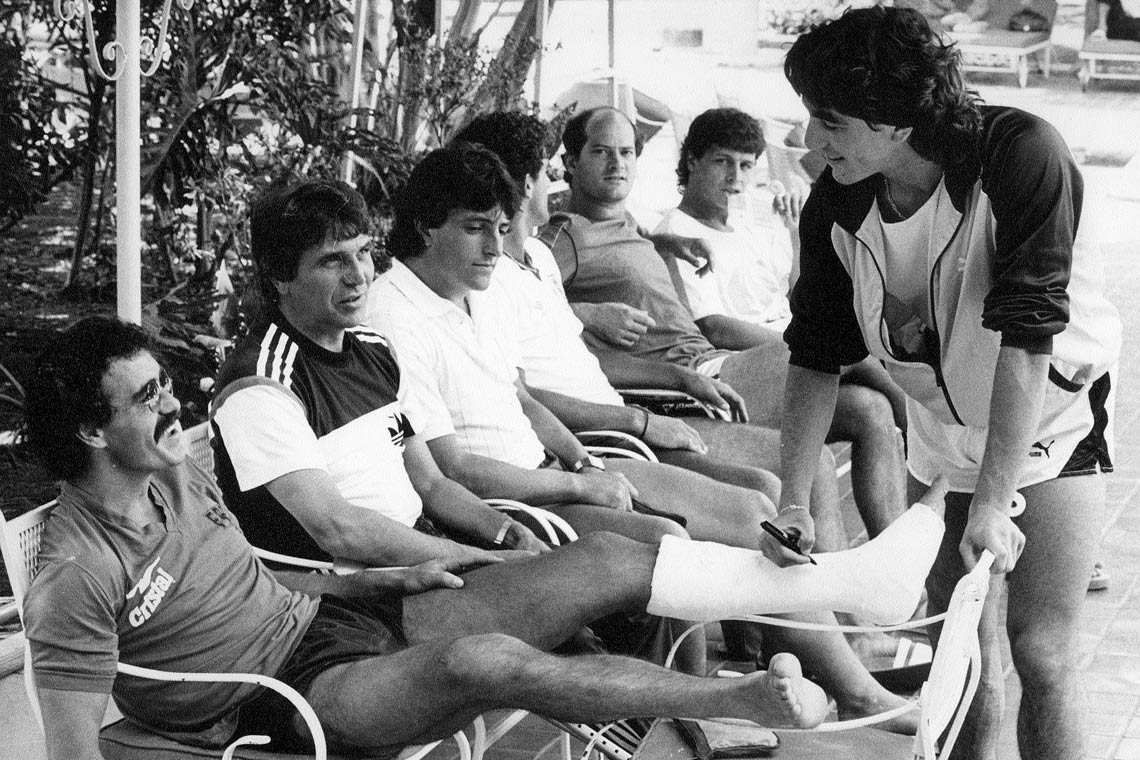 José Torres, who tried his best under such trying circumstances, quit and was replaced by a partnership of Ruy Seabra and Juca. Sebara, chosen by Resende, had no coaching experience whatsoever yet he selected the squad while Juca dealt with the coaching aspect.

Resende did not forget the insults he received on that coach in Mexico and soon exacted his revenge. Several players would not play for the national team ahead of their Euro 1988 qualifying campaign. Many were senior first team players – Diamantino, Jaime Pacheco, João Pinto, Fernando Gomes, Paulo Futre and Carlos Manuel.

The change did not have the desired effect by failing to qualify for Euro 1988, summed up by a poor 1-1 draw at home to Malta, leading to Seabra’s departure in 1987 and then Juca in 1989. Though players such as Pinto, Pacheco, Futre and Gomes returned to the national team, their next tournament wasn’t until Euro 1996. Portugal didn’t qualify for a World Cup until 2002 in South Korea & Japan, where a star studded squad crashed out of the group stages, displaying eerie similarities to 1986.

What transpired in Saltillo at times bordered on farce and cast a dark spell over Portuguese football that took a long while to dissipate. But once recovered from the shame of 1986, Portugal have enjoyed several memorable moments on the field in domestic and international football.

Even so, the Saltillo Affair serves as a timely reminder of how not to prepare for a World Cup and its disastrous consequences.