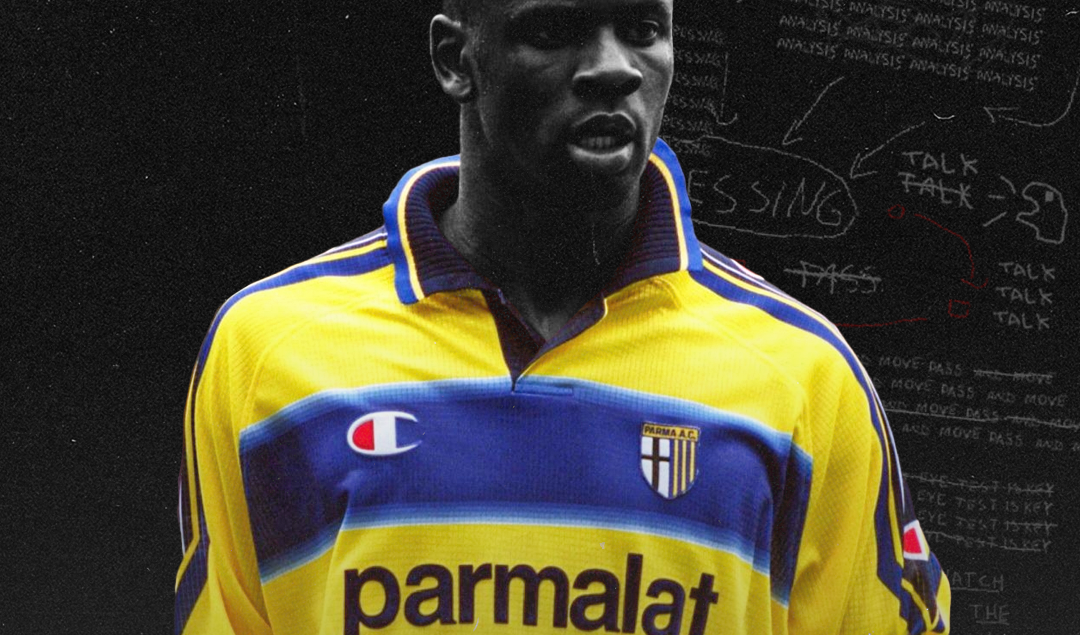 Today, the voice of fans can be heard loud and clear through social media channels or via reaction videos. But, 20 years ago there was no camera lens for them to eye up. Instead, the power of the fans was much more literal, and this was felt most strongly in Italy. Most of the major Italian ultra groups emerged from the ruins of ‘The Years of Lead’.

Two decades of social and political turmoil in Italy, set the perfect backdrop for militant fans groups to flourish. The influence of Italy’s Ultras was never felt more keenly then in 2001. That summer, members of Lazio’s Ultra group, The Irriducibili, met, or perhaps confronted, Frenchman, Lilian Thuram, in an attempt to persuade the defender to join their beloved Lazio. This is the story of The Irriducibili and their bizarre meeting with Lilian Thuram.

The Irriducibili officially formed in 1987, in a game between Lazio and Padova, where a 10 metre banner, reading: ‘I see only blue and white’ was unwound. Through sheer violence, the Ultra group muscled their way to become the heart of Lazio’s Curva Nord. An interview from one of the group’s leaders, Toffolo, gives an indication into the mindset of The Irriducibili.

“We left Rome without even 100 lire (5 cents) in our pockets… We always found a way to get into [the stadium]. There was never a problem for food because we raided some service station or bar.” Whilst the former leader of the Irriducibili, Fabrizio Piscitelli, better known as ‘Diabolik’ claimed that fighting made him “feel alive in a world of the dead”.

But not only were The Irriducibili provokers of fear and menace. They were an Ultra group that encouraged nationalism, and ultimately, racism and anti-Semitism. In a 2002 interview, Diabolik stated: “It disturbs me to think in the future, the Italian race will become mixed.”

The Irriducibili don’t hide their archaic views, they embrace it. In 1998, they hurled a banner to their Roman rivals that read: “Auschwitz is Your Country, The Ovens Are Your Homes.” During the 2000/01 season, UEFA fined the club five times for offensive chants and racist abuse during European games. Just weeks earlier, the club played their final home game of the season, 150 miles away, as punishment for unveiling a racist banner at the Rome derby.

The obvious question is, how did such a terror-fuelling group gain so much popularity? By the time The Irriducibili formed in the late 80’s more and more money was going into football, specifically Italian football. This was the land where the best players in the world came to bask in the peak of their careers.

Diabolik spearheaded an operation to maximise profits for The Irriducibili whilst Italian football was on the rise. The group ran 12 shops across Rome where they’d sell ‘Original Fans’ merchandise. Undoubtedly, Diabolik’s plan was successful, for reference he had an estate worth €2.3m.

Not only were The Irriducibili making financial gains; they were also growing in notoriety. The group had their own radio station, where they’d spread their aura of rebellion. Soon, Diabolik progressed from selling shirts and stickers to selling drugs.

This jump was bridged easily thanks to his connections to the Neapolitan gang, the Camorra. By the summer of 2001, The Irriducibili had developed a fearsome reputation, no matter who you were, you would listen. Even if you were a World Cup winner…

As was the case with Lilian Thuram. Just three years prior to his meeting with The Irriducibili his two goals against Croatia sent France into the final of the World Cup, where they’d beat Brazil 3-0. Thuram was no ordinary footballer, he was a national icon in France.

Thuram would not have needed persuading had this been a purely footballing matter. Lazio finished 3rd that season, and won the Scudetto the season prior. They’re squad was already bursting at the seams with talent: Nesta, Nedved and Crespo to name a few. All that was needed for the transfer to go ahead was Thuram’s seal of approval.

Lazio were willing to pay the 50 billion lire asking price (£22m). The only sticking point was Thuram’s scepticism towards the aura of racism and hate surrounding Lazio fans. Thuram knew all too well the state of fanfare in Italy. He was subject to racist abuse in a game against Hellas Verona that season. “The people who shout this stuff haven’t the ability to look beyond their own little world”, he exclaimed following the match.

So, it was up the Irriducibili to convince Thuram to join Lazio. In July 2001, Marco, Yuri, Diabolik and Toffolo embarked on a six-hour trip to attempt to lure the defender to settle in Rome. Upon arriving at Parma’s training ground, the group were warmly greeted by Marco Di Vaio. The striker had come up through Lazio’s academy, and had links to The Irriducibili – a testament to the status of the Ultras.

Undoubtedly this status granted them easy access to Parma’s dressing room, without interference. It was here where they met Thuram. Before talks began, the group handed over some Irriducibili merchandise – an olive branch. Although a very brittle one.

The group claimed the boos that came from the stands were only directed at opposition players. Whilst they’re good relationship with a black player in the Lazio academy demonstrated that the group were not as racist as Thuram believed.

In the aftermath, the feelings were that discussions had been good and The Irriducibili were confident that they had convinced, or rather intimidated their transfer target into complying with their wishes. Four days later, Thuram signed for Juventus. “No, come on, how could I go and play for Lazio, knowing what they’re like. It would be impossible” Thuram stated.

Lazio’s president Sergio Cragnotti pulled no punches, as to why Thuram had turned down the move. “Thuram has turned us down because of racism in the stands,” he claimed. “A small part of our fan base tarnished Lazio’s image around the world.”

Unfortunately, this was not something that was exclusive to Lazio fans. It was rife across Italian football, and Italian society. Days before The Irriducibili embarked on their trip to Parma, Silvio Berlusconi’s centre-right Forza Italian party secured an election victory. This was achieved through forming a coalition with far-right parties, such as ‘National Alliance’.

Just months after becoming Italy’s Prime Minister, Berlusconi was quoted, saying: “The West will continue to conquer peoples like it conquered Communism.” The events that Thuram witnessed in his playing career, contributed to the work he did following his retirement from football.

The Lilian Thuram Foundation was set up in 2008 with the goal to educate and eradicate all forms of racism. Thuram himself has led lectures, exhibitions and even published a book on race-related issues. 19 years after his meeting with The Irriducibili, Thuram published his book ‘La pensée blanche'(‘white thought’), it tells the story of the hidden intellectual mechanisms that underpin white domination in society. In his own words, it would have been “impossible” for Thuram to play for Lazio in 2001.