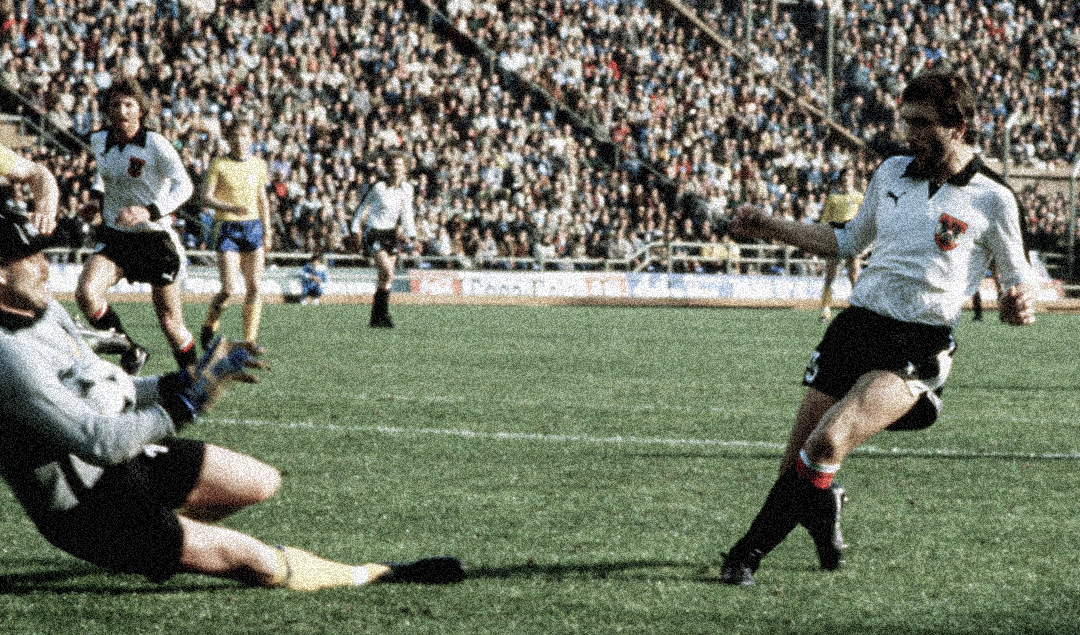 The second group stage ratcheted the step up in opponents for Austria. Group A was an all European affair, as the Austrians faced Italy, the Netherlands and West Germany. Only the winners of the group would progress to the World Cup final and finishing second meant a trip to the 3rd place playoff. There was no margin for error whatsoever.

Austria’s first match was against the Dutch on the 14th June in Cordoba, Argentina’s second most populous city. The 1974 World Cup finalists didn’t have Johann Cruyff in their squad but still had world class players. The names are synonymous with the golden age of Dutch football: skipper Ruud Krol, Wim Jansen, Arie Haan, Johan Neeskens, Dick Nanninga, Johnny Rep and Rob Rensenbrink.

Things went wrong for the Austrians right from the start when Holland won a free kick to the right of Austria’s 18 yard box on the sixth minute. Two Austrian players tried to clear Arie Haan’s cross, but misjudged the flight of the ball, as it sailed over both their heads for wide open Dutch centre back Ernie Brandts to easily score from close range. Holland imposed their dominance by created numerous chances and were awarded a penalty on 35 minutes when Gerhard Breitenberger clumsily felled Wim Jansen to concede a penalty. Rob Rensenbrink made no mistake from the spot.

Austria then compounded the errors two minutes when caught in possession. Rensenbrink sprinted into the opposition half before putting Johnny Rep through on goal with a expertly weighted defence splitting pass. Rep’s first touch was heavy and enticed Koncilia to charge out. Seeing this, Rep simply lofted the ball over the onrushing Austrian keeper and into the back of the net. 3-0 down at half time, the television clips of Austria’s manager Helmut Senekowitsch grimly looking on spoke a thousand words.

The Dutch put further salt into the wound when Rensenbrink again turned provider for Rep to make it 4-0 early in the second half. A slither of respectability was gained for Austria when Erich Obermayer pulled a goal back with ten minutes left yet Holland would have the last word when Willy van de Kerkhof sealed a comprehensive 5-1 victory.

The Netherlands had ironically been criticised by their press due to their lethargic displays in the first group stage. Austria had the misfortune to feel Holland’s wrath and satisfy their critics back home. Senekowitsch couldn’t hide the fact his side had been systematically played off the park. But there was no shame in losing heavily to one of the best teams in the world even without Johann Cruyff.

Austria’s next match was against Italy four days later in Buenos Aires at the Estadio Monumental. The Azzurri took confidence from their first game – a 0-0 draw against the holders West Germany. The Azzurri’s defence was impregnable under the captaincy of keeper Dino Zoff.

The key to Italy’s defensive supremacy was their triumvirate of Juventus players. Gaetano Scirea was a calming presence in defence and could build attacks from deep. Claudio Gentile’s philosophy was to never let a striker get the better of him – sometimes by less than fair means. He may not have been as stylish as Scirea but Gentiile’s aggressiveness was effective.

Antonio Cabrini represented the youthful axis of the triumvirate. The 20 year old made the World Cup squad despite not playing a single game for Italy. Yet the decision by manager Enzo Bearzot to take Cabrini to Argentina was justified, as the youngster performed superbly in the tournament. Defence wasn’t their only strong point. They had talented attacking players like Roberto Bettega and a young striker named Paolo Rossi who took Serie A by storm with Lanerossi Vicenza.

Losing 5-1 to Holland forced Senekowitsch to abandon his 4-4-2 formation and change to 4-3-3. It meant Walter Schachner came back into the side to replace Kurt Jara, with Senekowitsch hoping the

pace of Schachner could trouble Italy. Gerhard Breitenberger was also replaced by Heinrich Strasser who was making his first World Cup start. Yet Senekowitsch’s tactical plans went up in smoke in just 13 minutes.

Italy’s Franco Causio motored into Austria’s half and played the ball to Paolo Rossi. Causio then continued his forward run while Rossi extravagantly backheeled the ball to Causio. The young striker then made a forward run to the 18 yard box and Causio tried to return the favour by attempting a slide rule pass.

Rossi’s dart into the box was diligently tracked by Henrich Strasser and seemed well placed to cut out the danger. But his first touch was heavy, causing the ball to trickle away from him. Koncilia came out of the six yard box to try and collect or clear the ball. However, Koncilia was left exposed and Rossi took his chance.

The striker had been lurking behind Strasser all this time and struck after the full back’s heavy touch. The youngster nipped past the full back and poked the ball past the stranded Koncilia into the empty net. It was a cruel baptism of fire for Strasser in his first World Cup appearance. The Austrians were now on the back foot against a team routinely able to defend leads for long periods of time.

Italy controlled possession with ease and blunted Austria’s attack. The only clear cut opportunities created by the Austrians was a long range effort by Eduard Krieger that fizzed over the bar. The only reason why the match ended 1-0 was wasteful Italian finishing and Koncilia’s multiple saves.

Defeat to Italy shattered any hopes Austria had of reaching the 3rd place playoff. Their final game was against their rivals West Germany in Cordoba on the 19th June. A win was needed for the World Cup holders to reach the 3rd place playoff if the Netherlands beat Italy. There was a slim chance West Germany could reach the World Cup final if they beat Austria by five goals. Defeat would knock West Germany out of the tournament something Austria had not done since 1931.

West Germany could still call upon players from their 1974 World Cup winning team: Sepp Maier, skipper Berti Vogts, Bernd Hölzenbein, Rainer Bonhof and Hans-Georg Schwarzenbeck. They had young talented forwards like Dieter Muller and the prolific Karl-Heinz Rummenigge. Yet there were reasons for Austria to be hopeful. West Germany had put in some turgid performances in Argentina and had barely scraped out of the first group stage.

Despite their form, it took 19 minutes for West Germany to show their class against Austria. A series of one-two’s between Dieter Muller and Karl-Heinz Rummenigge split the red shirted Austrian defence wide open and Rummenigge easily slotted the ball past Koncilia. Remembering their meltdown against Holland, Austria didn’t let an early goal affect them, working hard to get back into the game. Their persistence was rewarded nearly fifteen minutes into the second half.

With acres of space on the right, Eduard Krieger whipped a cross into West Germany’s penalty area, where Wilhelm Kreuz tried to score from six yards out. The ball evaded Kreuz, as well as keeper Sepp Maier, but not the unsuspecting Berti Vogts – the ball bouncing off his knee and into the empty net. The fortunate equalizer gave Senekowitsch’s players renewed belief in themselves that was rewarded seven minutes later with one of the goals of the 1978 World Cup.

Krieger, who had grown into the game, crossed the ball from the left to Hans Krankl. Standing just to the right of the penalty spot, the striker trapped the ball and drew the nearest centre back towards him. Krankl then instinctively unleashed a unstoppable volley that rocketed past Maier’s full stretch

dive into the top corner. It was a goal of unmistakable brilliance wildly celebrated among Austria’s players and keenly applauded among the Argentinean crowd.

West Germany, jolted at Austria’s one-two strike, responded within a minute of Krankl’s screamer. Bonhof whipped in a free kick into the box and Bernd Hölzenbein got between two Austrian players to head the ball past Koncilla to make it 2-2. Both sides desperately tried to find a winner and it came with three minutes of normal time remaining.

Austria’s skipper Robert Sara played a crossfield ball from right to left that was intended for Krankl. West Germany’s Rolf Rüssmann was alert to the danger, quickly attempting to cut out the pass. But his attempted header turned calamitous, as he misjudged the flight of the ball, sailing over his head. Rüssman’s mistake turned to a opportunity for Krankl, quickly controlling the ball with his head, before sprinting towards the 18 yard box.

West Germany’s right back Manfred Kaltz came across to try and cover for Rüssman’s error. Krankl simply cut inside and left Kaltz floundering on the turf. Maier dashed off his line in an attempt to smother the ball before Krankl could shoot. But the Austrian was too quick and toepoked the ball under the advancing Maier into the net. Krankl ran off in celebration once again towards the touchline, soon being mobbed by his teammates and the coaching staff. Austria held on to do the unthinkable and beat their illustrious rivals. The game would be dubbed as the Miracle Of Cordoba.

“It was only much late that it became clear to us that this was our first big win over our rivals,” Hans Krankl spoke to FIFA in 2016. “Our big brother, that used to look down on us. It was great. It was a big win and it was a piece of Austrian football history, which was very positive,”

Austria still finished bottom of their group but victory against West Germany was an excellent way to bow out of the World Cup. They had confounded expectations under Helmut Senekowitsch to reach the second group stage ahead of Spain and Sweden. Topping things off by defeating West Germany was the icing on the cake.

The 1978 World Cup burgeoned the reputations of Austria’s players – none more than Hans Krankl. The striker already had interest from Europe’s biggest clubs before the World Cup after scoring 41 goals in 36 games for Rapid Vienna in the previous season. Krankl’s exploits in Argentina earned him a lucrative move to Barcelona where he scored 29 goals in 30 league games in his debut season and won the coveted Pichichi trophy. He also won the Cup Winners Cup in that same season and scored in extra time to beat Fortuna Düsseldorf 4-3 in the final.

Other players in Austria’s World Cup squad also made big moves. Bruno Pezzey signed for Eintracht Frankfurt and won the UEFA Cup in 1980. Walter Schachner moved from Alpine Donawitz to league rivals Austria Vienna. Helmut Senekowitsch on the other hand left the national side after the World Cup to coach Mexican club UAG Tecos for a year. The Austrians still managed to qualify for the 1982 World Cup in Spain, reaching the second group stage again, albeit in less heroic circumstances in the Disgrace of Gijon.

The 1978 World Cup would prove to be the high-water mark for Austrian football, as their record in international tournaments since 1982 has been mediocre. Yet the memories of 1978 still linger among those old enough to remember when Hans Krankl made defences tremble and the world took notice of the plucky Austrians.