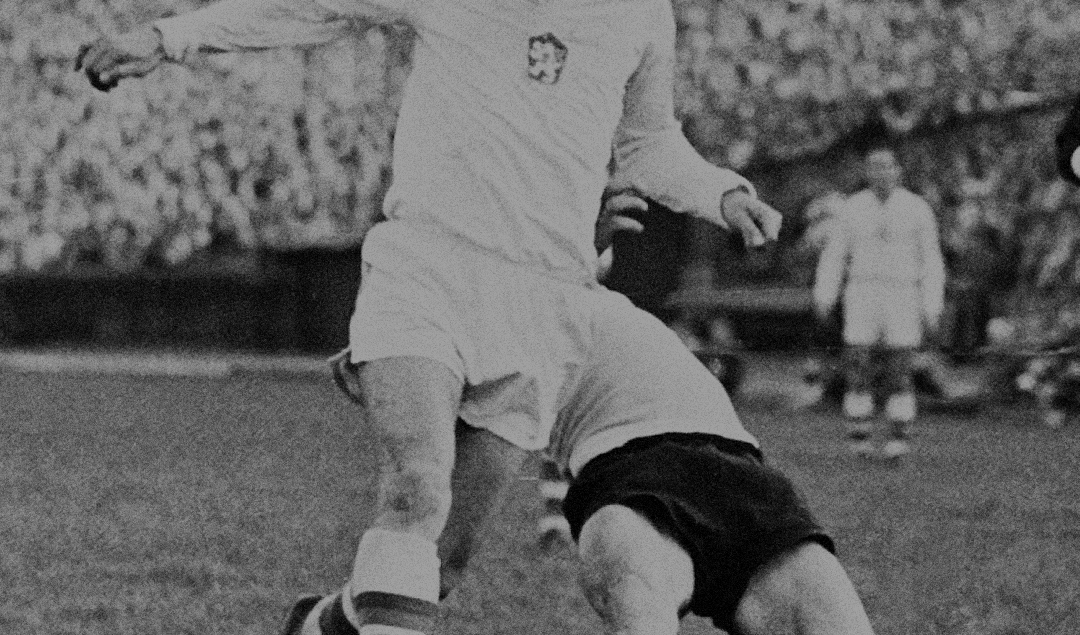 Facing Hungary in the quarter finals, Czechoslovakia once again were seen as outsiders. The Hungarians didn’t have the stars of the Mighty Magyars like Ferenc Puskás, Sándor Kocsis or Zoltán Czibor (all fleeing Hungary to European clubs after the 1956 Hungarian Revolution), but they still boasted a competitive squad.

They had a spine of experienced players from the 1958 World Cup – captain Gyula Grosics, defenders Sándor Mátrai, Ferenc Sipos, winger Károly Sándor and forward Lajos Tichy. In addition, Hungary had an exciting young player by the name of Flórián Albert.

The Ferencváros striker already had four goals in the group stages – the winner against England and a hat-trick against Bulgaria. With Tichy also netting three goals, the Hungarian attack simmered with intent in the group stages. 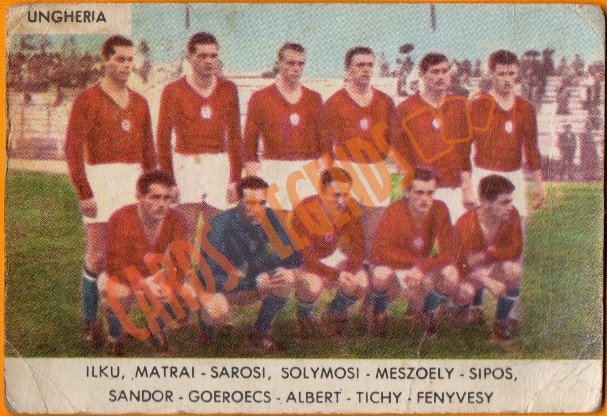 Czechoslovakia’s manager Rudolf Vytlačil made two changes for the game in attack – Tomáš Pospíchal and Josef Kadraba for Jozef Štibrányi and Jozef Adamec. No changes in the defence were needed, as Vytlačil trusted his experienced core of Viliam Schrojf, Ladislav Novák, Svatopluk Pluskal, Josef Masopust and Ján Popluhár to carry out the backbone of his tactics.

The organisation and solid defensive structure was a formidable shield. Nevertheless, that shield was put under initial pressure by the Hungarians, probing the defence that had come unstuck against Mexico a few days earlier. However, the Czechoslovakians would strike first after just 13 minutes.

Collecting a pass just past the halfway line, Masopust drove forward and kept the Hungarians occupied. Checking back to his left, the midfielder played an incisive pass towards Adolf Scherer, who had managed to break the offside trap. Letting the ball go past him, Scherer hit the ball low past Grosics and found into the bottom corner of the net. It was a composed finish by Scherer that was created by the skillful intelligence of Masopust. 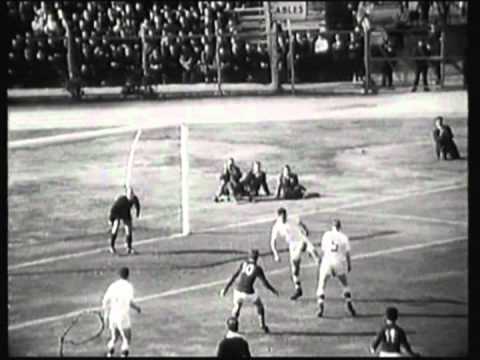 Now a goal behind, the Hungarians unleashed a furious siege in Czechoslovakia’s half in search of an equaliser. Soon the Magyars began to create chances – a mishit clearance in the box from a cross led to Tichy uncharacteristically blasting wide. Controversy soon erupted when Tichy’s free kick hit the bar and seemingly went over the line. But despite incessant Hungarian protests, Soviet referee Nikolay Latyshev waved play on.

The Hungarians continuously piled the pressure on Czechoslovakia, finding themselves pinned in their own half. The Czechoslovakians defended admirably by defending in strength, as they made clearances, as well as last ditch blocks, but none did more to blunt the Hungarians than Viliam Schrojf. The goalkeeper showed why he was known as Black Cat – leaping about to claim crosses, save at the feet of approaching opposition players and bring a degree of reassurance to his players.

Schrojf would then produce a save of absolute wonder to deny a long range screamer by Gyula Rákosi that was destined for the top corner. Footage shows the reaction of Hungarian forward Máté Fenyvesi in the foreground (wearing 11) with his hands on his head in disbelief at the save. 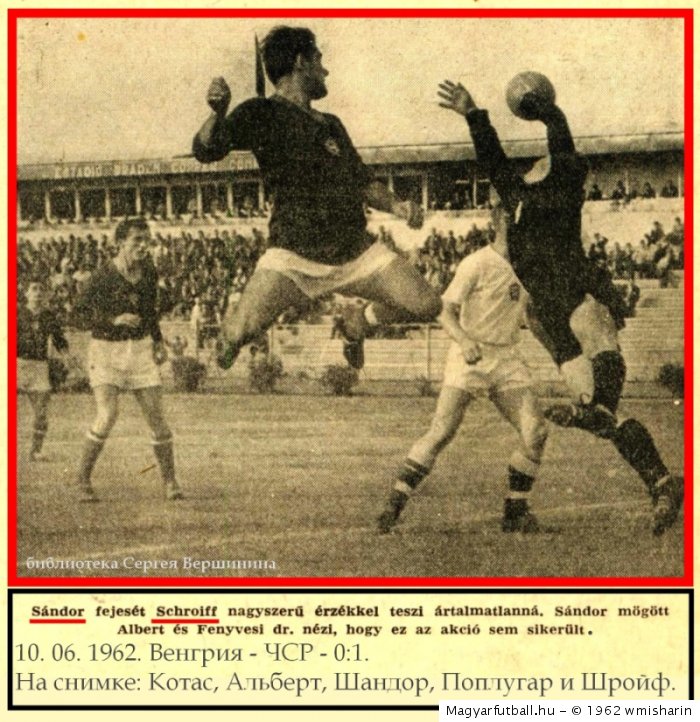 Schrojf would make countless saves throughout the game, as he denied Albert, Sándor, Sipos and then Hungarian right half Ernő Solymosi from long range. The Hungarians just could not find a way through resolute defending and the sensational display of goalkeeping from Schrojf.

At the full time whistle, the frustration of the Hungarians was clear to see, as one player booted the ball away in anger. The Czechoslovakian players instantly rushed towards Schrojf to embrace him in appreciation of his efforts and hoist the goalkeeper on their shoulders.

One step away from the final, Czechoslovakia faced Yugoslavia in the semi final in Viña del Mar on the 13th June. Vytlačil decided to keep faith with the same side that had beaten Hungary. Yugoslavia had a young squad, with just two players over the age of 30, as well as only five players having more than 10 caps.

Despite this, Yugoslavia were ably captained by midfielder Milan Galić, who had set up the winner to beat West Germany in the quarter final. Their main attacking threat was Dražan Jerković (pictured below), a striker that in the group stages scored twice against Colombia (as did Galić) and a goal in the win vs Uruguay. 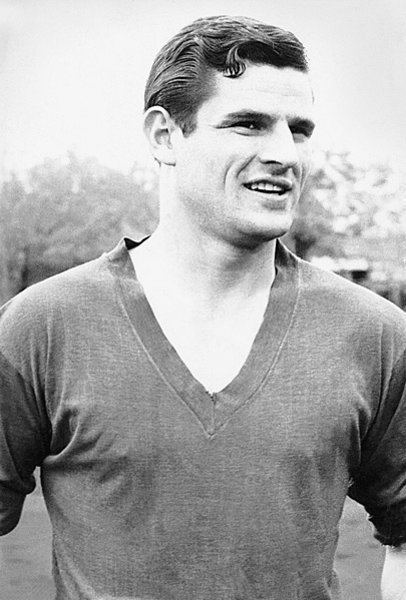 That attacking threat became clear as Czechoslovakia were largely on the back foot in the first half. The Yugoslavians created several chances, with Galić shooting wide or able dealt with by Schrojf. The first half ended goalless, but it took merely three minutes to break the deadlock in the second half. Build up play led to Josef Kadraba’s initial effort being well parried by Grosics only for Kadraba to rebound with a diving header that found the back of the net.

Yugoslavia pressed for an equaliser, with Schrojf once again in top form, making a litany of saves and claiming crosses or diagonal long balls into the box. However, confidence can make a player step too far, which led to Yugoslavia’s equaliser on 69 minutes.

A long ball was played into the 18 yard box and Schrojf came out of his line to try and claim it. However, Jerković got to the ball first, heading it past Schrojf to the empty net, despite the very best efforts of Popluhár. 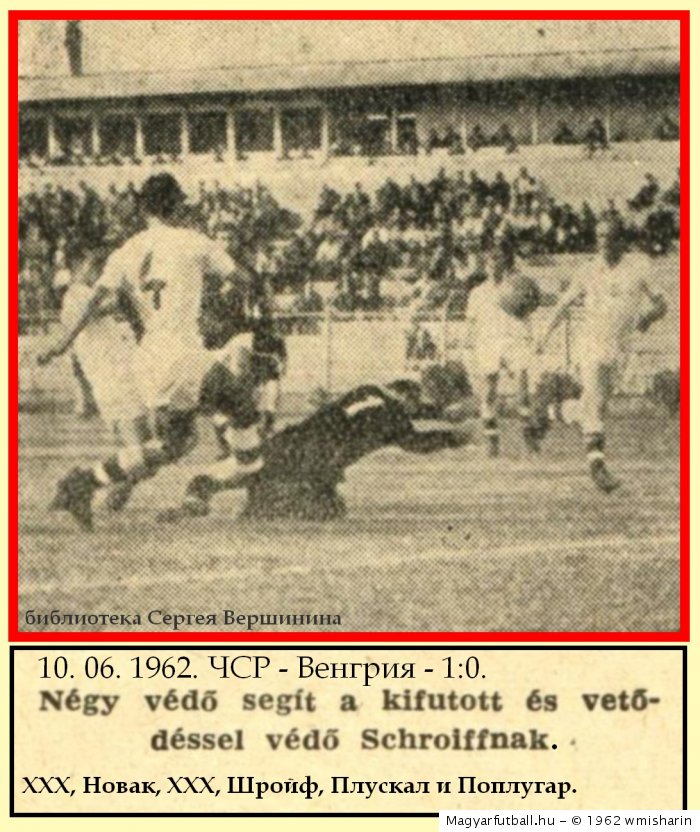 With the Yugoslavians pressing for the winner, Schrojf made amends for his error by saving excellently from Jerkoviç, as the game tilted finely in the balance. The telling point came in the 80th minute, when a Yugoslavian attack broke down, as captain Ladislav Novák clipped the ball forward to find Kadraba in acres of space just inside the opposition half.

As Kadraba drove forward, it forced the Yugoslavian centre back to move towards Kadraba, in turn opening up space outside the 18 yard box for Scherer to exploit. Kadraba passed the ball to Scherer and was now one on one with goalkeeper Milutin Šoškić.

To his credit, Šoškić immediately rushed out to try and narrow the angle, but Scherer poked the ball past him to put Czechoslovakia in the lead. 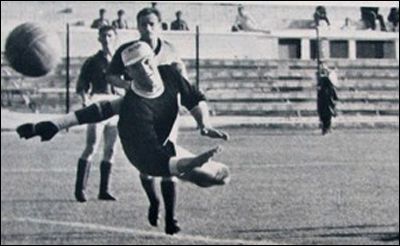 Any hopes of Yugoslavia getting back into the game was squandered four minutes later when centre back Vlatko Marković conceded a penalty for handball. Scherer converted the spot kick for his third goal of the tournament.

Reaching the World Cup final was a fantastic achievement that no one had expected, with the press and own football association doubting them. Importantly, the team under the guidance of Vytlačil never doubted themselves. Scherer had the highest praise for Vytlačil:

“Not only an excellent coach, but above all a psychologist.”

Just one step away from immorality, Czechoslovakia faced their group stage opponents Brazil in the final. The Seleção had dealt with losing Pelé for the rest of the tournament by Garrincha producing scintillating performances in the knockout stages. He scored twice in a 3-1 win against England in the quarter finals and another brace in the semi finals to overcome hosts Chile.

That display had been sullied by Garrincha getting sent off in the semi final for striking Chile’s Javier Rojas after being kicked. However, the Brazilian Sports Confederation (the CBD being a precursor to the now CBF) managed to get FIFA to overturn the suspension.

Czechoslovakia were forced to make one change, their right back Jan Lála succumbing to an injury sustained against Yugoslavia (a cruel blow as he had played all five games) and was replaced by Jiří Tichý. Playing in front of a capacity crowd of 68,679 in Chile’s capital Santiago on the 17th June, this was the biggest game of their lives.

Defence had been at the forefront of their run to the World Cup final, but Vytlačil surprised everyone by having his team attack from the start. Despite Brazil hitting the post through their forward Vavá, it took just 15 minutes for Vytlačil’s bold tactics to pay off. 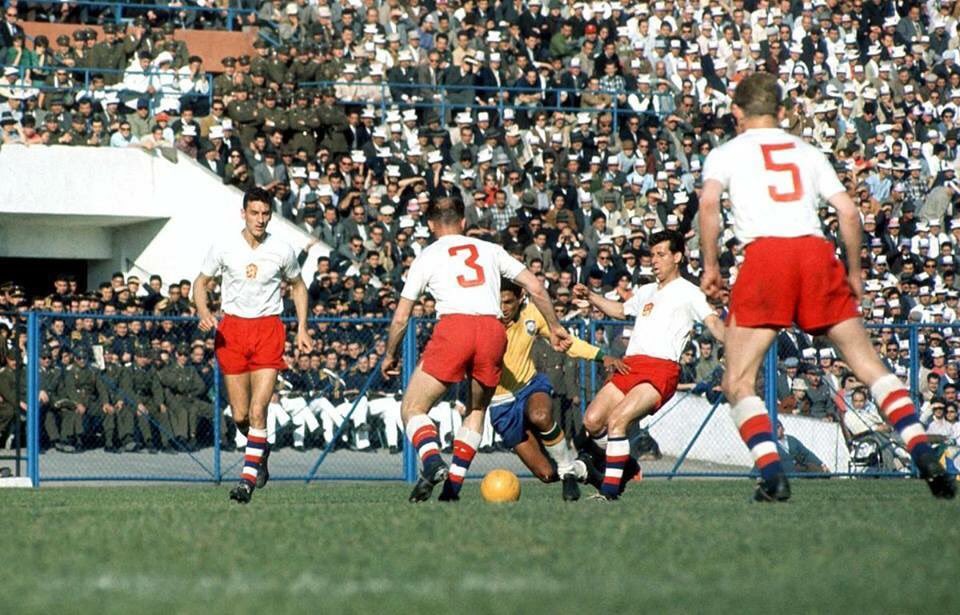 Collecting the ball from the right, Tomáš Pospíchal cut inside and began to dribble towards the box. Focused on Pospíchal, one Brazilian player stepped out of the 18 yard box to try and close him down. None of the other defenders realised that parallel to Pospíchal was Josef Masopust embarking on a run into the box.

No one tracked the midfielder’s intelligent dart into the box, as he took advantage of the space vacated by the defender that had pushed forward. Pospíchal threaded a perfectly threaded pass to Masopust and instinctively slid the ball past Gilmar to put Czechoslovakia in the lead.

However, a team is most vulnerable as soon as they have scored, a phrase repeatedly said by commentators. Yet that repeated cliché befell the Czechoslovakians less than two minutes after Masopust’s goal. Receiving a throw-in near the corner flag deep into Czechoslovakia’s half, Amarildo shrugged past right half Andrej Kvašňák, before taking on Pluskal down the edge of the 18 yard box. 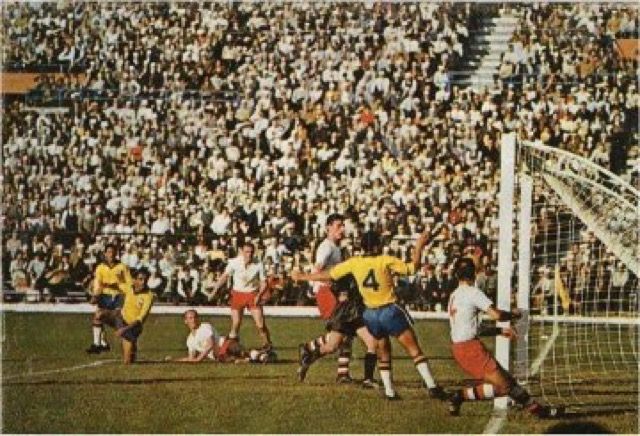 Approaching the byline, it was expected that Amarildo would cross the ball, which led to Schrojf to take a step forward in anticipation. A gap now opened between Schrojf and his near post – something that Amarildo exploited by shooting past the gap to equalise.

With the scores level, the game ebbed and flowed with several chances for both sides, as Jelínek had a shot saved and Schrojf brilliantly parried a swerving free kick from midfielder Didi. The Czechoslovakians had the best chance of them all when Tichý’s cross was headed wide by an unmarked Kvašňák.

Mischievously, Jelínek attempted the same shot as Amarildo in the second half (more or less from the same spot), but Gilmar spectacularly clung onto the ball. With the game finely poised, the deciding point arrived on 69 minutes.

Charging into the Czechoslovakian half with a driving run, Zito played the ball to his left towards Amarildo who drove towards the byline. Cutting back inside, the striker clipped the ball across the six yard box over the head of Schrojf. While two Czechoslovakian defenders were ball watching, Zito drove past them to head the ball for his first goal in four years.

Now Czechoslovakia had to chase the game, something a team based on defence wasn’t used to. However, they did have a credible penalty shout for handball turned down by Soviet referee Nikolay Latyshev. The game would be settled on 78 minutes when Brazilian right back Djalma Santos punted the ball into the box.

The cap-wearing Schrojf misjudged the flight of the ball, spilling it and led to Vavá putting the ball into the net. Brazil held on to win the 1962 World Cup and defend their title. It was a chastening final for Schrojf – at fault for two of the goals.

It was all the more galling that prior to the game, Schrojf was given an award as the best goalkeeper of the tournament. As Vytlačil remarked:

“Had they told me I would lose the final because of two errors by my best player, I would never have believed it.”

Despite falling short, Czechoslovakia received several plaudits for their efforts in Chile, in contrast to being dismissed as outsiders prior to the tournament. Masopust won the Ballon D’or for 1962 in part to his sensational performances ahead of Eusébio who won the European Cup during the 1961-62 season. 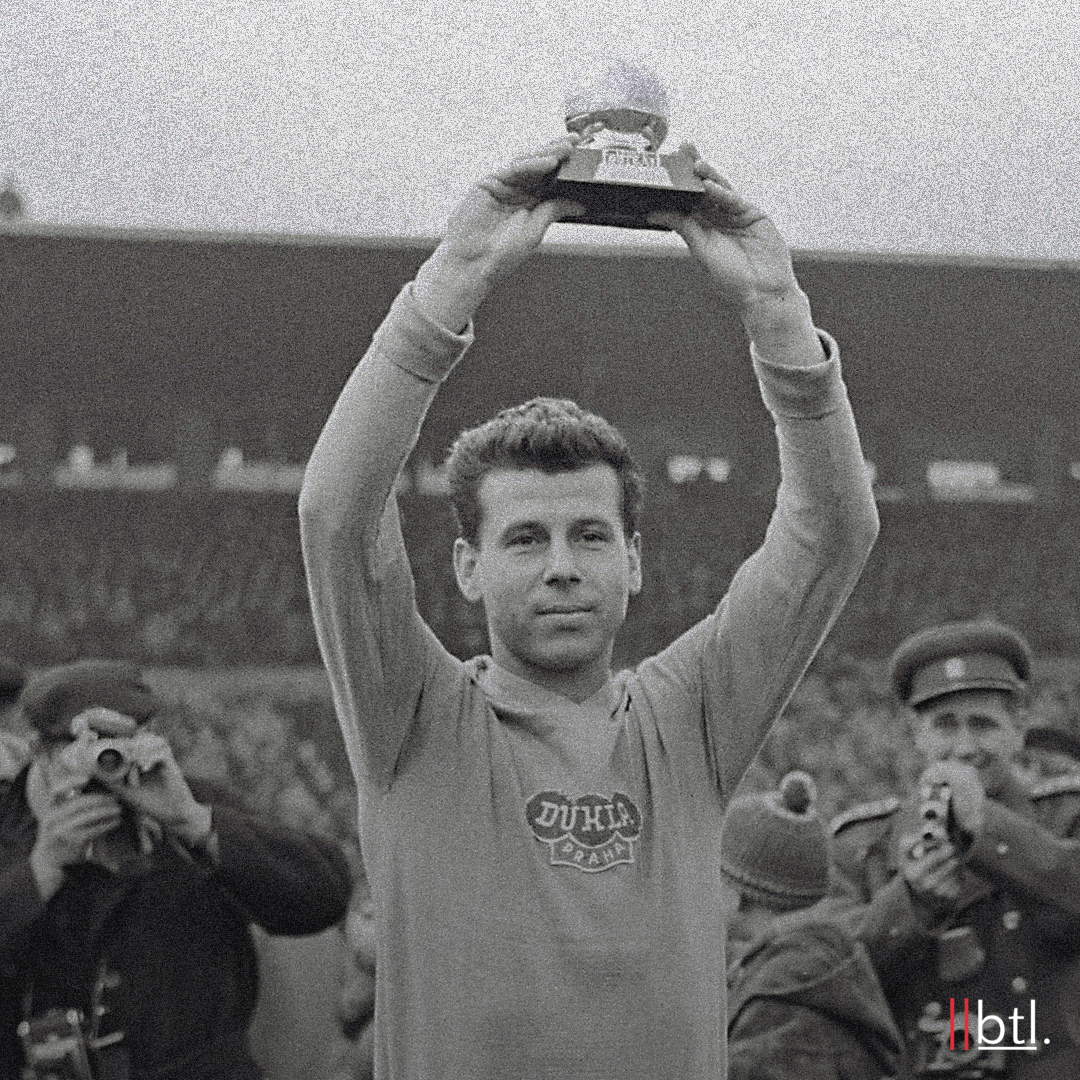 Masopust was also invited, along with Pluskal and Popluhár, to play for a World XI against England in October 1963 to celebrate the 100th anniversary of the Football Association.