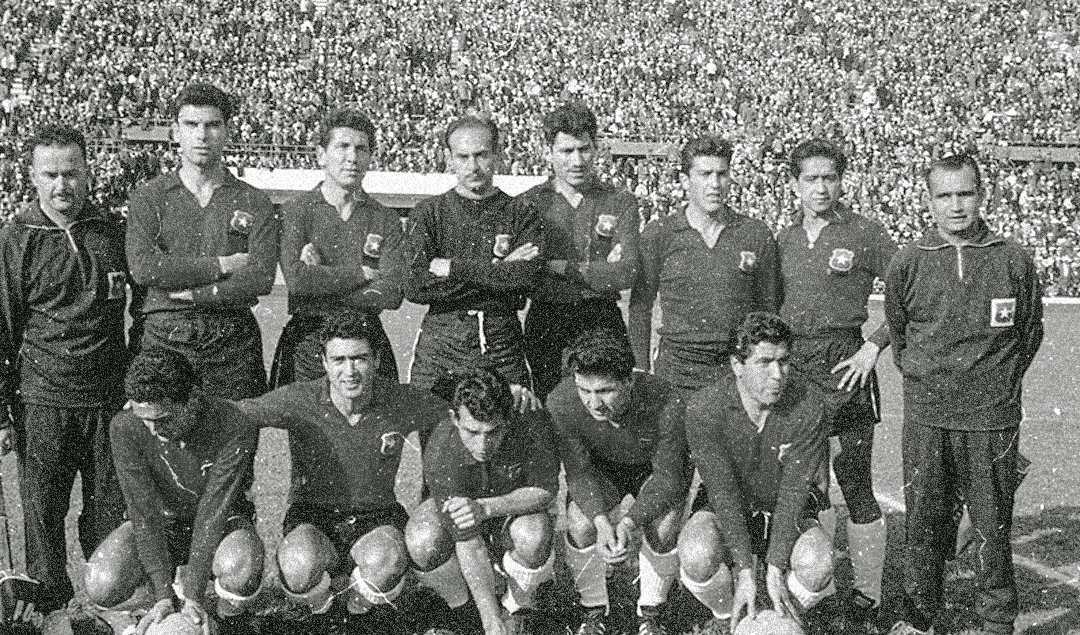 When hosts Chile were drawn against the Soviet Union, their quarter final opponents were seen as the favourites. They had several star players, starting with the legendary Lev Yashin in goal. Nicknamed the Black Spider for wearing black in matches, Yashin was a player with an excellent reputation, helping the Soviets win the 1960 European Championships. However, despite a uncharacteristic error against Colombia in the group stages, manager Gavril Kachalin still had total faith in the 32 year old.

Two other players made the Soviets tick: Viktor Ponedelnik and Valentin Ivanov. Ponedelnik had scored the deciding goal to beat Yugoslavia in the final of Euro 1960 and also won the Golden Boot. The 25 year old was in good form in Chile by scoring twice in the group stages against Yugoslavia and Colombia. Ivanov was also in sensational form during the group stages and had netted five goals in just three games. Searing pace and excellent close control dribbling made him a primary threat. It was no surprise he made his debut for Torpedo Moscow in the Soviet Top League at the age of 17.

The Soviet Union may have been favourites but that changed after just eleven minutes. La Roja won a free kick on the left just outside the 18 yard box. The angle may have been acute but that didn’t stop Leonel Sánchez fiercely striking the ball towards goal. It went over the wall and rifled past a bemused Yashin into the back of the net. Yet the Soviets recovered through a equaliser by Igor Chislenko from a wayward cross.

Chile’s players surrounded the linesman to furiously appeal for offside, but Dutch referee Leo Horn let the goal stand. Out of perceived injustice soon came brilliance merely 30 seconds after the equaliser. Midfielder Eladio Rojas received the ball deep into the Soviets’ half and punished the Soviets by thundering a 30 year drive past Yashin into the bottom corner. The Soviets poured forward in search for an equaliser but Chile held on to reach the semi finals of the World Cup. Such a milestone was thought to be a fantasy a few years ago but now had turned to reality.

Chile would play Brazil in the semi final just three days after knocking out the Soviet Union. The game was to be held at the national stadium in Santiago, which meant the squad had to again make the 1,385 mile journey south from Arica. Even so, there was a palpable sense of excitement in the capital, with over 76,000 fans in attendance for the game.

Brazil were overwhelming favourites, yet had not performed at their best, hindered by losing Pele to injury in the group stages. Coach Aymoré Moreira had several attacking options in Vava, Mario Zagallo and Pele’s replacement Amarildo. One positive from Pele’s injury was it allowed Garrincha to blossom and become the key man to made the Seleção tick.

It didn’t take long for the game’s first chance to occur when Leonel Sánchez’s fierce drive clattered the post. Brazil quickly stepped up the tempo in response and took the lead on nine minutes. Zagallo’s cross wasn’t properly cleared by the defence and the ball rolled to Garrincha. The No.7 hit a first time shot on his weaker foot and the ball rifled past Escuti into the top corner.

The winger terrorised Chile with his dribbling, body swerves and creating opportunities for his teammates. It got worse for La Roja on 32 minutes when Brazil won themselves a corner and Zagallo whipped the ball in to the near post. Garrincha got ahead of his marker to thump a header past the stranded Escuti. Two goals down, the crowd stunned into silence, most teams would have thrown in the towel. Though Chile showed they were made of sterner stuff on 40 minutes. Brazil conceded a free kick 25 yards out from goal. Jorge Toro exquisitely curled the ball away from Gilmar into the top corner.

Hope was kindled only for the Seleção to shatter it moments into the second half. Garrincha delivered a looping ball into the box aimed at Vava. The forward seemed to be in a disadvantageous situation. Several defenders surrounded him while the goalkeeper Escuti had a defender next to him on the line. Vava bravely jumped over defenders Carlos Contreas and Raúl Sanchez to direct his header towards goal. Escuti tried to keep it out but somehow pushed the ball into the net.

Chile still bravely pushed forward despite losing 3-1. Their perseverance was rewarded when they won a penalty with less than 30 minutes left and Leonel Sánchez made no mistake from the spot. Both sides had good chances to change the complexion of the match. Escuti had to be alert to deny Garrincha his hat-trick and Chile went agonisingly close to equalising when Rojas hit the post. The Seleção would then kill the game on 78 minutes. Zagallo crossed the ball into the box from the left and Vava used his pace to get between two defenders to score from close range.

Brazil once again silenced the crowd but soon found their voice when both teams went down to 10 men. Chile’s Honorino Landa was given his marching orders on 80 minutes due to his rough tackling. Garrincha sullied his performance (two goals and a assist) by kneeing Rojas near the touchline after Rojas kicked Garrincha once again. The Brazilian might have got away with it were it not for the assistant referee who alerted Peruvian referee Arturo Yamasaki Maldonado.

In the end, Chile were simply outclassed by a better team. The Brazilians endeared themselves to journalists by Garrincha’s world class performance. El Mercurio’s headline encapsulated their view on the star of the show: “Garrincha, what planet is he from?”

Chile still had one more game to play against Yugoslavia in Santiago for 3rd place. The Yugoslavs had enjoyed their best World Cup to date, which included a famous 1-0 win against West Germany in the quarter finals. Yugoslavia had two main threats in strikers Dražan Jerković and Milan Galić. Jerković had scored four goals in the tournament while Galić had three. However, despite the attacking prowess of both sides, the defences largely kept them quiet during the match.

The score was still goalless after 90 minutes when Eladio Rojas received the ball on the halfway line. The midfielder drove forward, with the Yugoslavian defenders backing off as he advanced, too preoccupied with tracking Chile’s forwards. As a result, Rojas decided to shoot from 25 yards. It wasn’t a powerful shot until the ball deflected off a Yugoslavian player. The ball changed direction and left the already committed keeper Milutin Šoškić stranded. La Roja’s late goal had secured 3rd place – just reward for Riera and his players’ efforts throughout the competition.

Even though Brazil won the 1962 World Cup (beating Czechoslovakia 3-1) it was the people of Chile that were the real winners. The 1962 World Cup might not have been memorable unlike previous editions and at times was violent. But the way Chileans banded together after such a terrible disaster is to be commended. Chile’s national team would instil a sense of pride by surpassing expectations to finish 3rd – still their best World Cup performance. Carlos Dittborn’s mythical words brilliantly encapsulated the spirit of Chile from when they were awarded the World Cup in 1956 to the tournament in 1962:

“Because we have nothing, we will do everything”