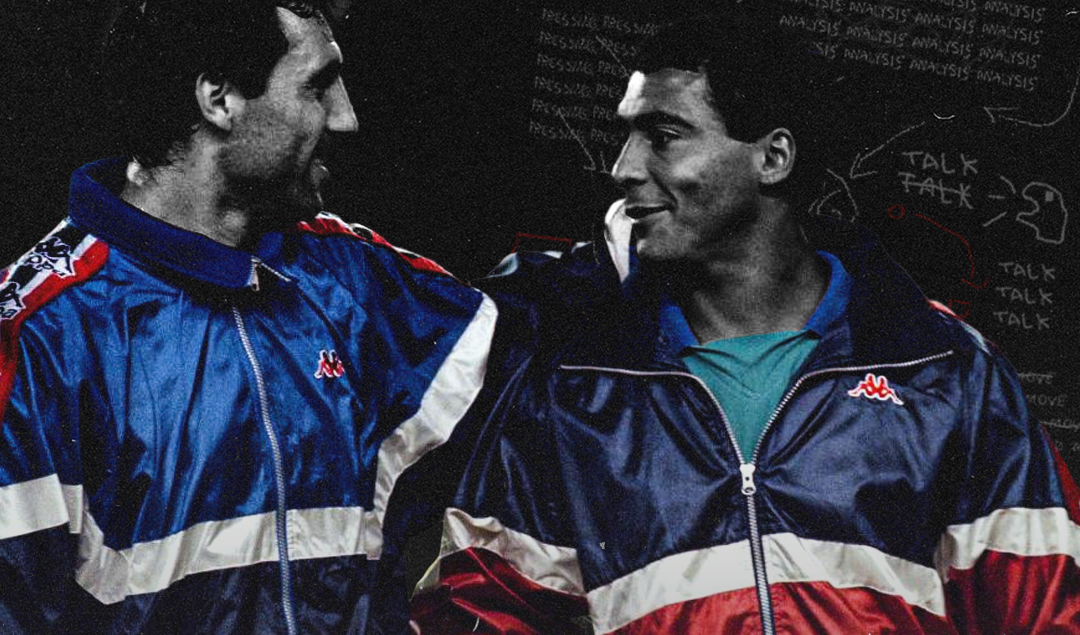 8th of January 1994 remains a day that not many football fans will ever forget. It was El Clasico, on the grandest stage of them all in Europe, Camp Nou, that brought a stunning result 5-0 for The Dream Team led from the bench by the Master himself, Johan Cruyff, against their bitter rivals, Los Blancos.

In front of nearly 100.000 supporters in attendance, FC Barcelona unveiled the Total Football, unstoppable and unforgettable the midfield diamond provided a master class that will remain in the history books of the beautiful game. In this analysis, we will focus on the moments with the ball from the FC Barcelona midfield diamond, both from the perspective of the position on the pitch and functional roles throughout the game.

On the other hand, Real Madrid led by Benito Floro from the bench adopted a 1-4-1-4-1 system with Buyo – Llorente, Lasa, Alkorta, Sanchis – Milla – Luis Enrique, Michel, Prosinecki, Alfonso – Zamorano. Los Blancos changed the system from a 1-4-4-2 flat midfield to a 1-4-1-4-1 hoping that a pivot in the number 6 role will shut Jose Mari Bakero off for 90 minutes. 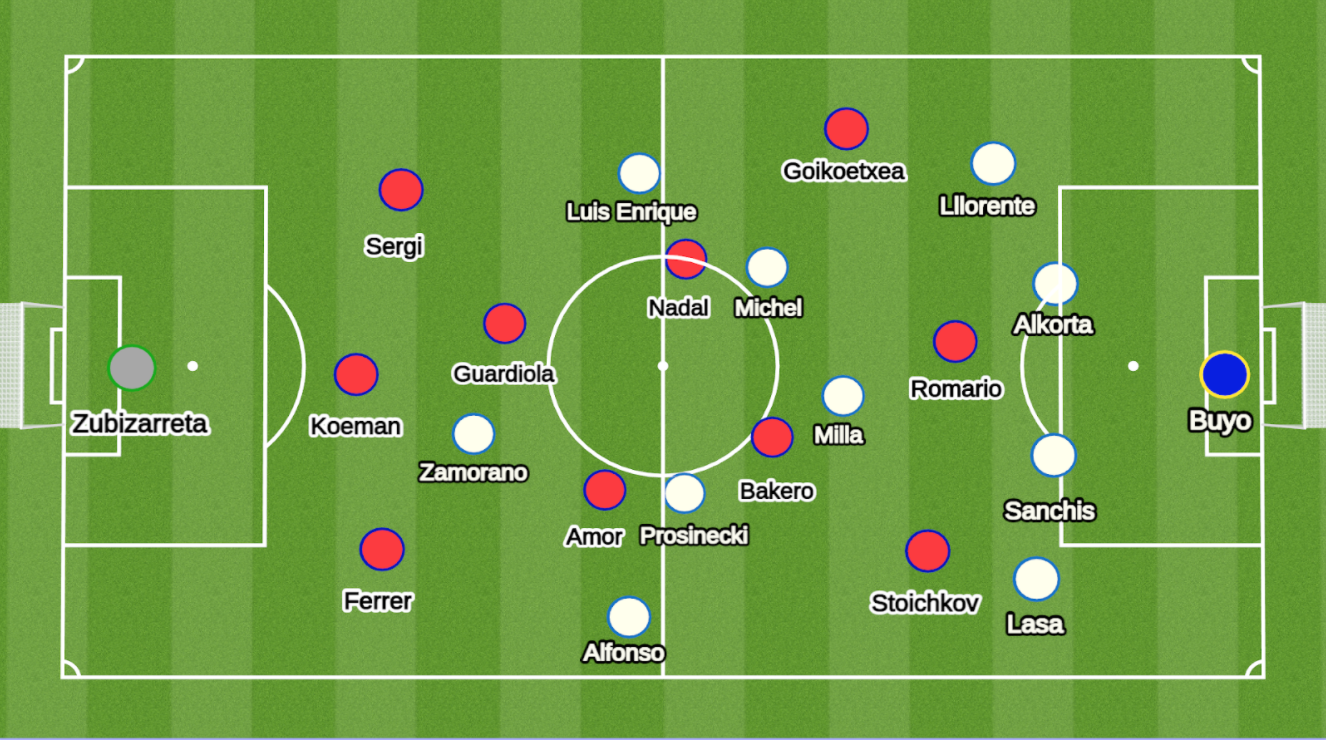 The Diamond in Action, an Engine That Created Advantages

It is not about playing in a position, but about playing from a position and that’s what Total Football is about. Fine-tuning and synergies were describing at perfection the diamond midfield composed by Pep Guardiola in front of the defense, Miguel Angel Nadal and Guillermo Amor interior midfielders, and Jose Mari Bakero in the number 10 role. 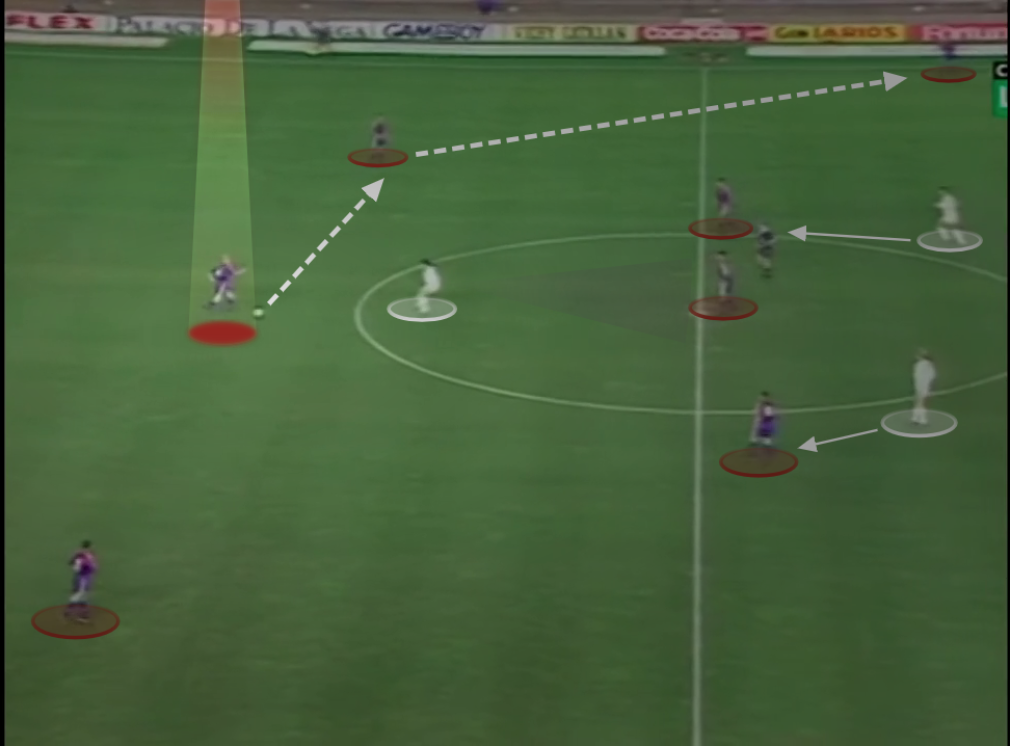 Right from the start of the build-up, Barcelona easily found the free man, having only one striker to overcome in the initial press against. Even if Guardiola was in the shadow cover of Ivan Zamorano, while Amor and Nadal were closely marked by the opposition’s midfielders, Andoni Goikoetxea would drop deep to support progression. A clean exit in the exterior channel drained Madrid players’ energy shifting from side to side in the attempt to form a strong side.

The numerical advantage and amplitude that Barcelona players were exploiting at the beginning of play forced Real Madrid to quickly reorganize into a mid-low defensive block. The answer came fast through Jose Mari Bakero, the Catalans number 10 role player who empowered the 3rd man concept to overcome the opponent’s defensive positional advantage.

Bakero was the main connector in the 3rd man sequence that ruined the single-pivot defensive vigilance of the 1-4-1-4-1 system. Even if he found himself many times in a positional disadvantage, the functional roles and positional awareness of his teammates facilitated the free man to be found. 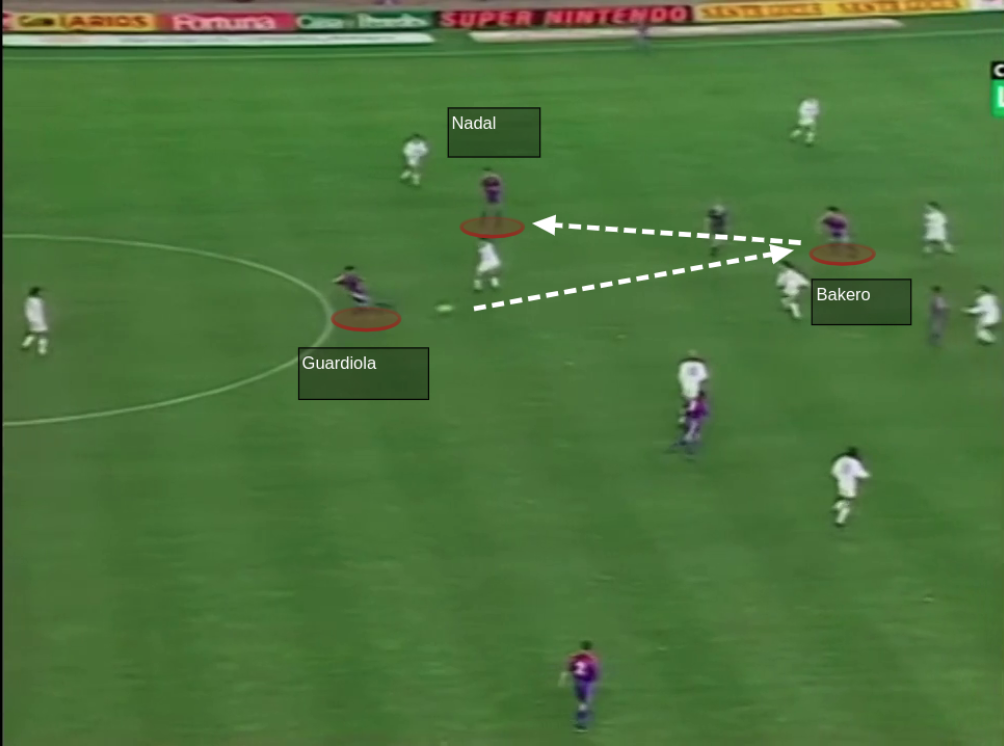 The fulcrum of the entire movement was to release the 4th man, almost every time Romario, and gain a positional and dynamic advantage in front of the goal. 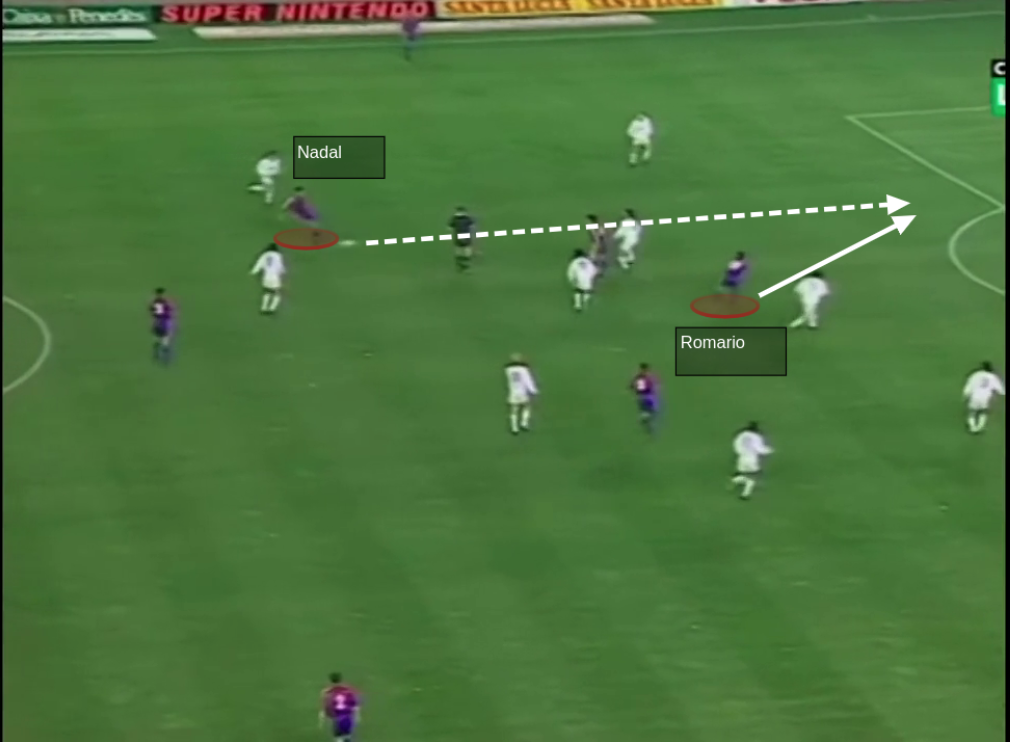 But this wasn’t the only offensive weapon Barcelona brought on the pitch that night. The plan to keep Romario under strict marking in a low defensive block failed for Los Blancos. The Brazilian forward had plenty of space provided by Bakero’s positioning, who regularly pulled one defender out of position causing an incomplete defensive line and freeing up the central corridor. 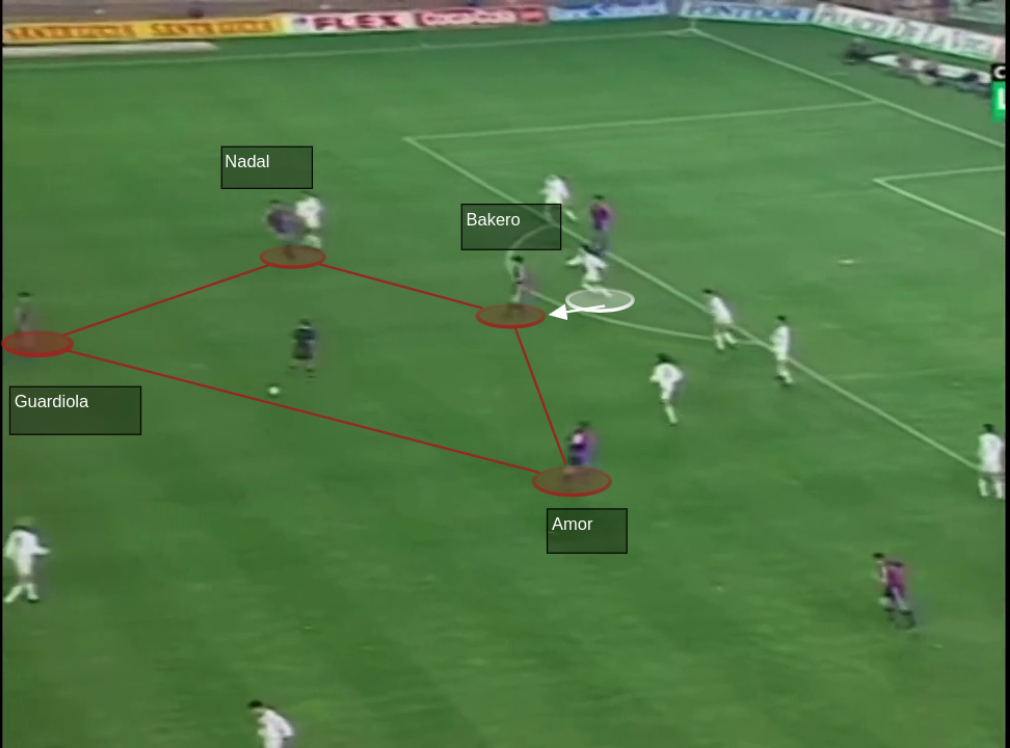 Madrid found themselves on the back foot right from the start of the game. A quick change in personnel with Fernando Hierro for Alfonso Perez, combined with a narrower and more direct midfield press tried to balance the situation. It didn’t work as Albert Ferrer changed his functional role from right-back to a midfielder giving Amor the freedom to activate higher up the pitch in the right inside corridor.

Guardiola possessed a qualitative advantage that eased the ball progression, once the pass got through the second line of pressure finding the free man in the midfield, Barcelona created a series of advantages in the offensive phase, numerical, dynamic, and positional all combined. 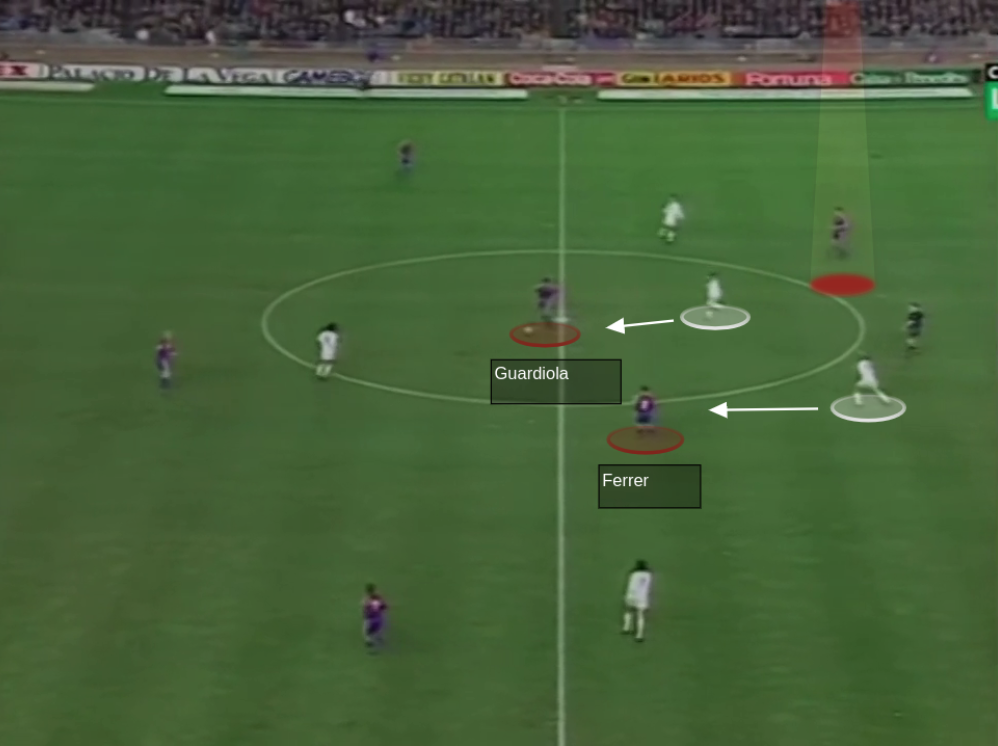 The speed of the ball outweighed the quickness of the rivals in the attempt to reduce the time and space of the possessor/direct receiver or indirect receiver. The players were carrying their functional roles empowering a fluid structure, having the correct distances and staggering in the midfield line that was always giving a clean way out with the ball, and never blocking the most dangerous and effective passing lanes to arrive in front of the opponent’s penalty box. 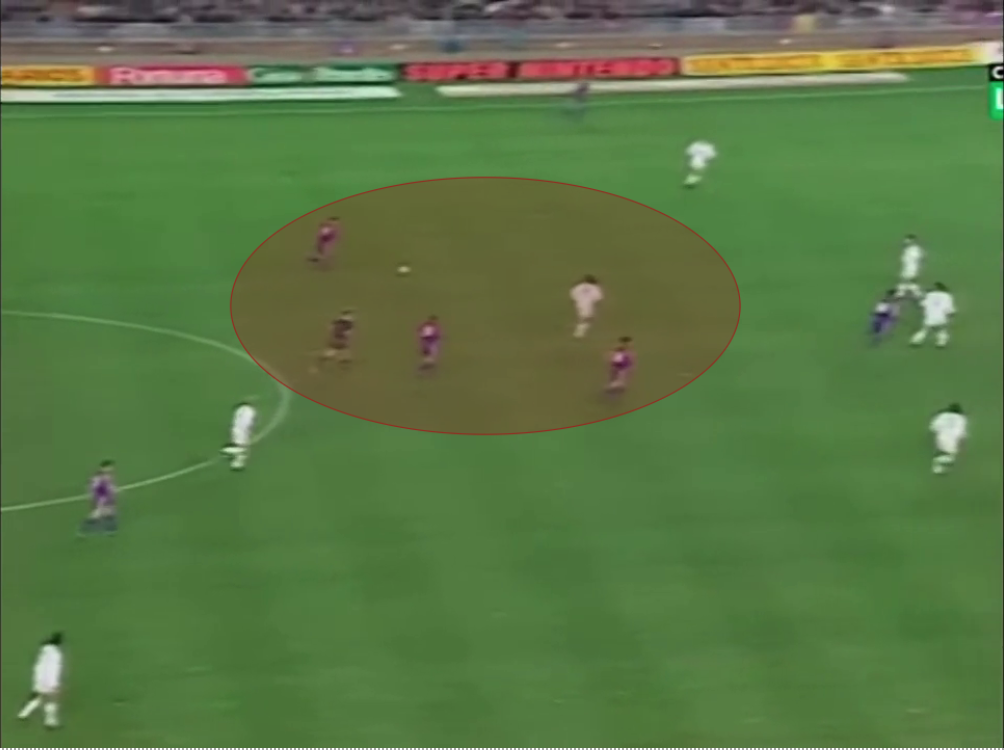 The diamond midfield kept the structure, even if there were interchanges of positioning, most frequently between Amor and Ferrer / Romario and Stoichkov.

Stretching the opposition defensive line was always in Johan Cruyff’s Juego de Posicion game model so that his formation can have plenty of space to get in behind. The second half brought Michael Laudrup for Hristo Stoichkov on the field for Blaugrana with Madrid, forced by the result, to advance the backline in a medium block.

Divide and conquer; that’s how the third goal of the night can be described, with pEP Guardiola’s long passing quality in full display. The wingers, Sergi Barjuan and Laudrup, engaged the rival fullbacks providing amplitude, Bakero pulled the central defender out of position while Nadal and Romario made the runs in behind. 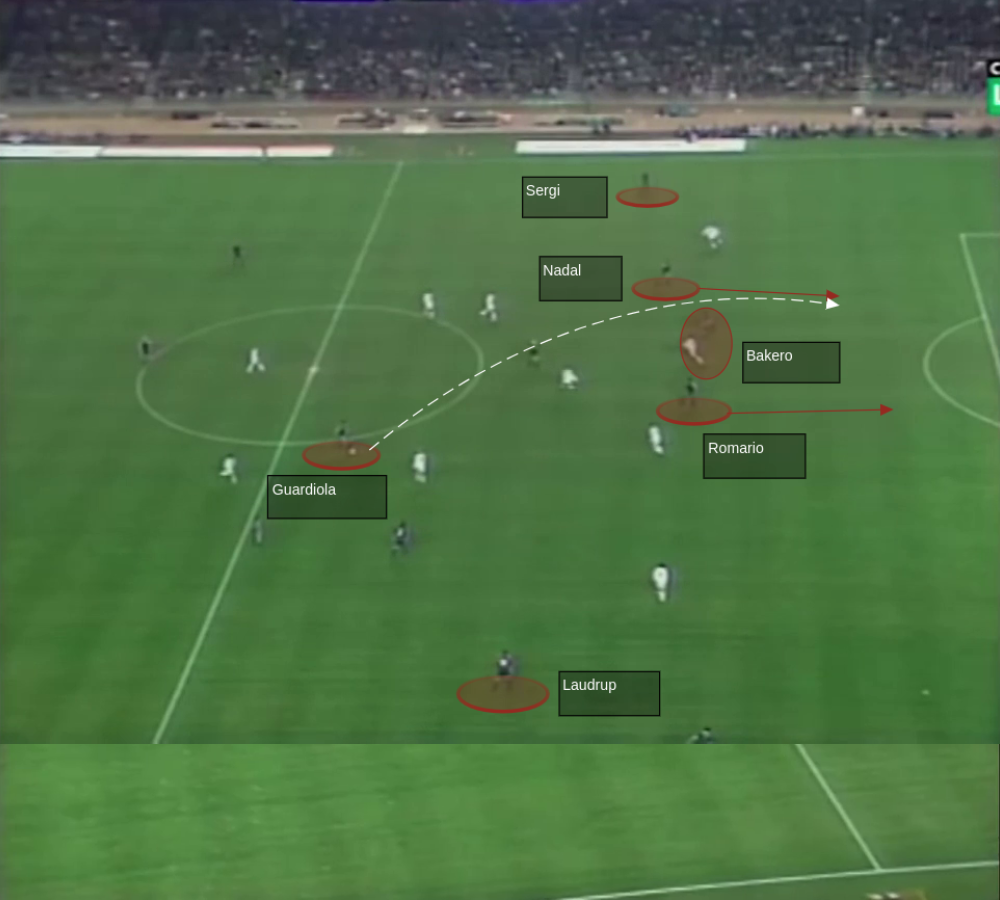 The Dream Team that won 5-0 against Real Madrid in 1994 was formed by a group of players with a high level of connection that gave birth to a socio-affective decisive advantage creating an iconic moment in football history.  Their midfield was the center of gravity, the entire team revolving around it prioritizing the functional roles over the traditional positions. 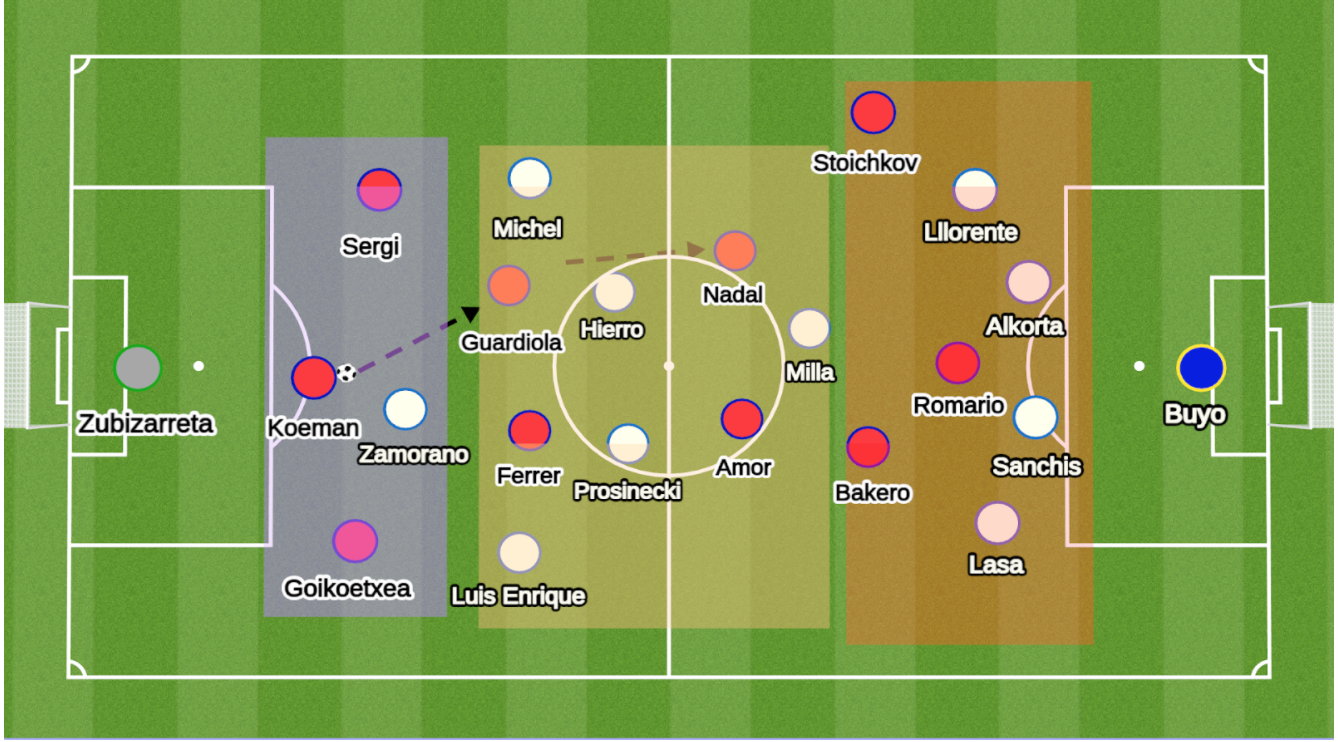 An example of Dimensioned Stage Space analysis using FC Barcelona moments with the ball as reference.

Ronald Koeman finds himself deep in the build-up stage with Ivan Zamorano pressing him directly. Guardiola who offers progression support receives the ball, the stage space changes, now the Blaugrana enters into the Positional Stage. Nadal offers another progression support (positional advantage over Hierro) attracting the opposing pivot (LuisMilla) having 2 options to continue:

– Into the Positional Stage, passing to Amor;

– Into the Finishing Stage, passing to Stoichkov or Bakero while Romario is engaging both center backs.

The main idea of Barcelona’s attacking philosophy was to move fast and precisely the ball into the finishing stage where players as Stoichkov, Romario, or Bakero (having a qualitative advantage) would create the best scoring opportunities.

Bringing Ferrer into the midfield structure helped Johan Cruyff’s team to have a 4v3 numerical advantage in the center of the pitch, exploiting also the opposing wingers’ low work rate in defense, both Luis Enrique and Michel remaining beaten after the ball passed their position.

Barcelona would go on to win 5-0 via a hat-trick from Romario, a goal from Ronald Koeman, and a late goal from substitute Ivan Iglesias, and managed to edge Deportivo La Coruña on goal differential to win the 1993/94 league title. However, they found themselves humiliated by Milan in the European Cup Final in Athens and would have to wait another 12 years before claiming their first Champions League trophy.