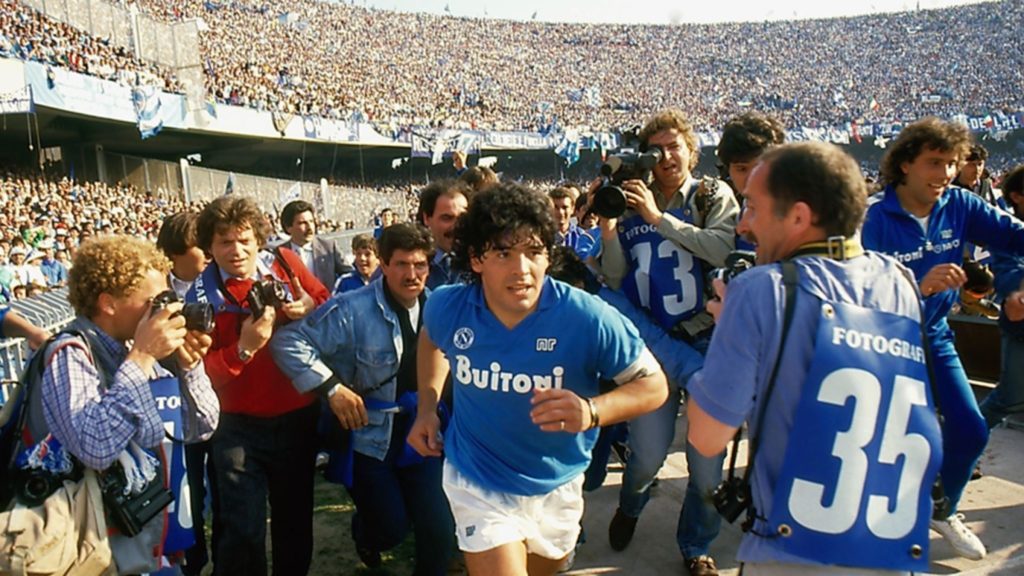 Diego, Diego, Diego surrounded the streets of Naples during 1984 to 1991. Known as a god-like figure, Diego Maradona brought the city together with filled hearts. Napoli, the biggest club in the south of Italy, secured the signature of Maradona from Spanish giants FC Barcelona, for what was then a world record fee £6.9m in 1984. Success soon followed, winning two Scudetti, UEFA Cup, Coppa Italia and a Super Cup all within seven glorious years. Not only did Diego bring an excitement and goals to the faithful, he improved all players around him on field too.

But what happened once the god like figure decided to leave Italy?

Maradon’s time in Naples at first was full of success and joy, people within the streets walked with a spring in their step and a smile from ear to ear as they finally saw their side challenge with the world’s elite. Napoli had broken the monopoly thanks to Maradona. He ended the season with a personal high, finishing top scorer with 10 goals.

The Partenopei’s final Scudetto to date came during 1990-91 season. It’s never healthy to put all hope and faith into one individual but in the eyes of the Napoletani their god like captain could do no wrong. But that began to change when their talismanic captain urged the Azzurri to support Argentina in the World Cup, Italia 90.

That’s where his demise begin; after the tournament, Maradona was banned for 15 months for testing positive after a drug test. He never represented the club again, and local newspapers released photographs of him partying with then the crime organisation, known as Camorra. Even if the club’s president – Corrado Ferlaino – hired private detectives to keep a close eye on the behaviour of Diego, it wasn’t enough.

Although Maradona was absent during the 1991-92 season, this was masked by the brilliance of the young super star Gianfranco Zola. Once Maradona returned to Spain, the downward spiral began. Although they steadily in the Serie A, from 1993-95 success stories were largely down to a talented crop of players, Daniel Fonseca, Fabio Cannavaro and Zola who are now well known players across the world.

Unfortunately this does not overshadow the financial crisis that was looming the club, Ferlaino was forced to sell his prized assets Fonseca, Cannavaro and Zola all sold in an attempt to save the club. Their head coach Lippi joined Northern powerhouse Juventus in 1994. The Partenopei faithful were reluctant to admit this was the beginning of the end for the club after their 1996-97 season began which so much promise.

With 14 games into the season and Napoli sitting second in the league table, newly appointed coach Gigi Simoni seemed to hit the ground running but after Ferlaino discovered that Simoni had a pre-agreement to join Inter Milan at the end of the season, Simoni’s tenure in Naples came to an end and their on-the-field results soon followed.

Conceding an average of two goals per game, youth coach Vincenzo Montefuso could not stop the free-fall. Off-the-field problems were taking its toll on field, and Feraino was once again forced to sell more players, leaving Napoli extremely short handed. After 33 consecutive years in the Serie A, their relegation was confirmed to Serie B in 1996.

After two unforgettable seasons in Serie B, Giorgio Corbelli bought 50% stake in the club, becoming joint owner with Corrado Ferlaino. The Neapolitans had to wait until the 1999-2000 season for their side to achieve promotion back to the Serie A.

Neapolitans are quite superstitious, and they believed that since the departure of Maradona, their club had a curse looking over them. To their defense, things didn’t get any better since promotion. In 2001, Napoli were forced to play their home games in smaller stadiums in the south of Italy due to an unfortunate flooding at the San Paolo Stadium. This would cause all sorts of problems to their financial structure, gross income from tickets sales and merchandise had decreased.
Their despair was then complete when in 2004 the Civil Tribunal of Naples declared them bankrupt with debts of £79m. If Napoli couldn’t find a buyer for the club, their very existence was vulnerable.

Saviour current owner and film producer Aurelio De Laurentiis bought the club for £35m, this did not prevent the Italian F.A ordering Napoli to continue their journey in Serie C. De Laurentiis provided the fans with hope and a project, the Partenopie faithful filled the San Paolo. 50,000 plus fans crowed into the stadium for Serie C games, their seemed to be light at the end of a daunting tunnel to which Napoli have not looked back at since. They have been reborn under the new ownership and after back to back promotions they are now a stabilised Serie A club, having finished second in their past two season.