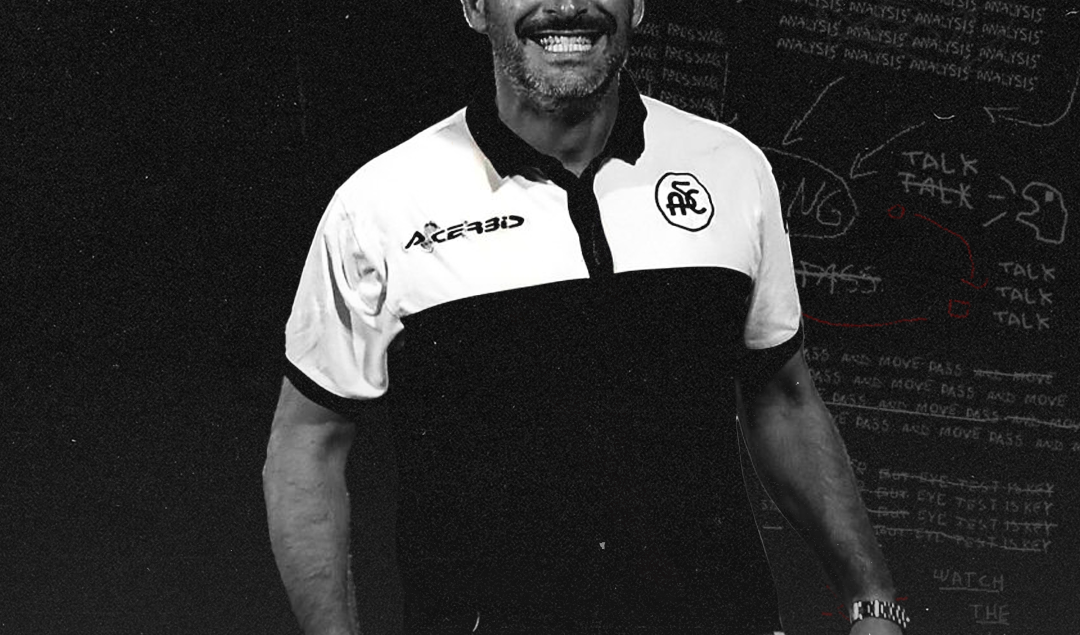 La Spezia is a city that is not well known for its sporting prowess or great historical sites, and it is better known as a transport hub, especially for tourists who travel to the colorful villages of Cinque Terre.

The city has the second-largest population in the Liguria region after Genoa and it is also known for one boasting one of the Italian Navy’s largest bases.

Its football team Spezia made history in August by achieving Serie A promotion for the first time ever, progressing at the expense of Frosinone from the Lazio region in the Serie B play-offs.

For the first time in Serie A history, there will be three clubs from Liguria as the Spezzini will be joining Genoese clubs Sampdoria and Genoa in Italy’s top flight, but it will not be the first appearance in the highest division of Italian football per se for the Aquilotti (Little Eagles).

Spezia had a spell in the Prima Divisione in the 1920s, making its debut in 1920/21 and remaining there for five seasons, and it had won a wartime championship in 1944 under the name VV.FF. Spezia, when it was affiliated with the local firefighters. 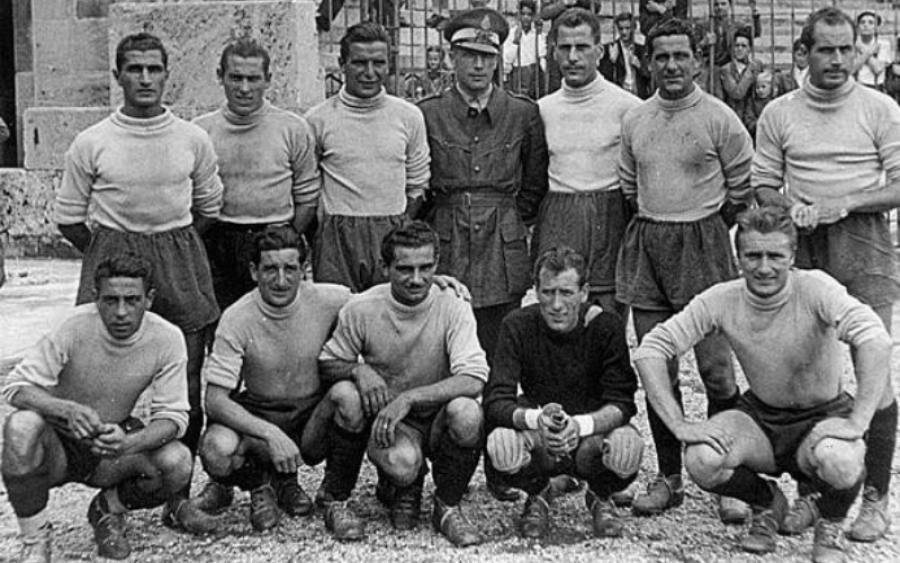 Originally formed as a sports club in 1906, the football team was eventually established five years later. Throughout the course of their history, the Aquilotti have been reformed three times, with the latest refoundation coming in 2008.

It was in August of that year when Gabriele Volpi purchased the club. Born in Recco outside of Genoa in 1943, Volpi made his fortune in the oil business in Africa, particularly in Nigeria where he holds dual citizenship.

For the 2008/09 campaign, the club was known as Spezia Calcio 2008 and played in Serie D, which was the fifth division at the time. It finished second in Girone A and had lost in the play-offs but the Aquillotti were still elevated into Lega Pro Seconda Divisione, the then equivalent of the fourth division.

After the conclusion of that campaign, the club reverted to the Spezia Calcio name, and it finished second in Girone A of the Lega Pro Seconda Divisione in 2009/10. The Aquilotti earned their Lega Pro Prima Divisione after winning the play-offs.

After two seasons in Lega Pro Prima Divisione, the Spezzini were in Serie B for the 2012/13 campaign and they finished 13th. From that season on, they only missed out on the play-offs once in 2017/18, when they finished 10th.

Spezia finished as high as fifth in 2014/15, but like in many other campaigns, success in the play-offs eluded the Ligurian club. There was a time around the winter of 2015/16 when Volpi was linked with an acquisition of Serie A club Sampdoria but nothing eventuated from it.

The Aquilotti patron has proven to be one of the great mangiallenatori or coach-eaters during his reign at the club, changing coach no less than 15 times in 12 years, and he decided to replace Pasquale Marino with Vincenzo Italiano for the 2019/20 season.

In the previous two campaigns as a coach, Vincenzo Italiano had taken his teams to the play-offs so it seemed like a natural choice for Volpi to hire someone familiar to succeeding in such circumstances.

The German-born tactician was at Arzignano Valchiampo in 2017/18 in Serie D, reaching the play-offs, and he was at Trapani the following season, winning the Serie C play-offs and earning promotion to Serie B. 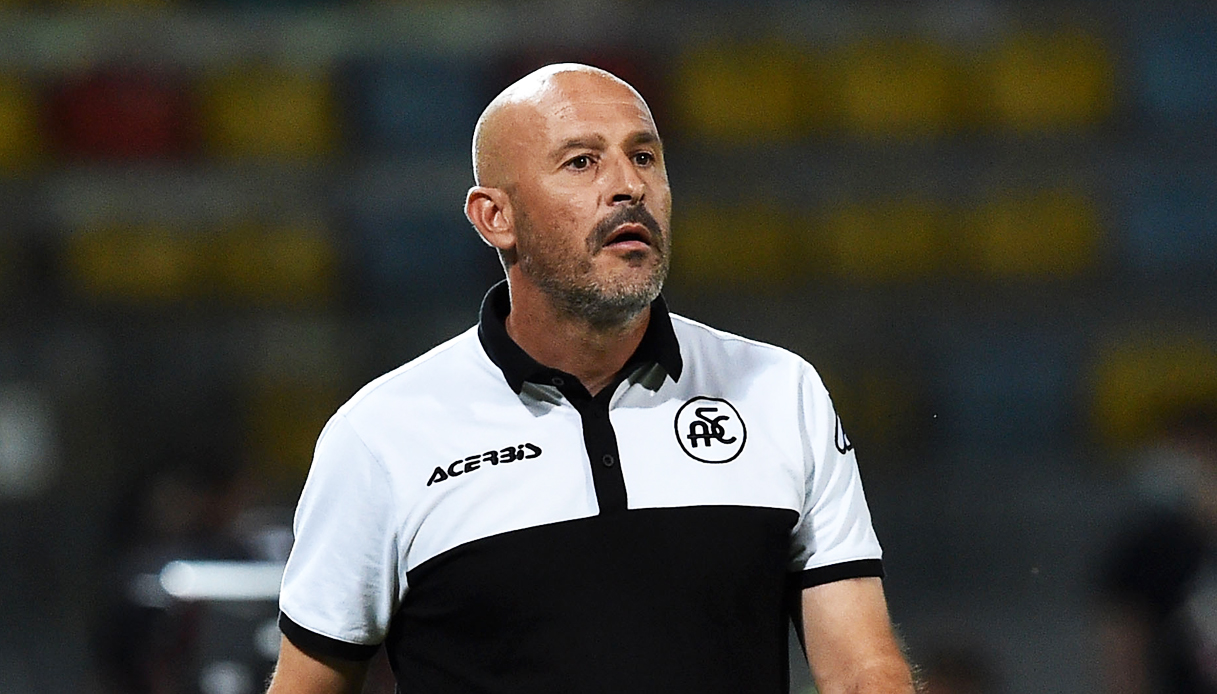 Since arriving at Spezia, he has been committed to implementing an attacking philosophy and fielding his team in the 4-3-3 formation. His career on the Aquilotti bench started with a 5-0 demolition of Serie C side Pro Patria in the second round of the Coppa Italia before suffering a 1-0 defeat to Sassuolo in the third.

After that elimination from the Italian cup, Italiano struggled to get results in Serie B and Spezia was at risk of falling into the relegation zone after seven rounds. The Aquilotti had won 3-0 away to Cittadella in the opening round, but they had lost five of their next six games, which included a 4-2 defeat to Italiano’s former club Trapani.

The German-born tactician had an unwavering faith in his footballing principles but he decided to change the personnel in his starting line-up and the results followed.

Lithuanian youngster Titas Krapikas was replaced in goal by Simone Scuffet after the defeat to Trapani but further changes were made as the season progressed.

Martin Erlić featured once from Rounds 1 to 12 but he then eventually partnered captain and experienced defender Claudio Terzi in the centre of defence. Spanish right-back Salva Ferrer featured twice in the opening nine rounds but he eventually displaced Luca Vignali for the remainder of the 2019/20 season.

Uruguayan left-back Juan Ramos played five out of the first seven Serie B games, retained his spot for a while, and then featured just once from Rounds 15 to 35. Center-back Riccardo Marchizza eventually took Ramos’ place on the left for the majority of the season but he lost his place to Hellas Verona loanee Luigi Vitale in the play-offs.

Dutch left-winger Delano Burgzorg featured in that barren spell in the opening seven rounds but he would be relegated to the bench and he transferred to Hercules Almelo in January. His place on the left-wing would eventually be taken by Ghanaian-Italian forward Emmanuel Gyasi. 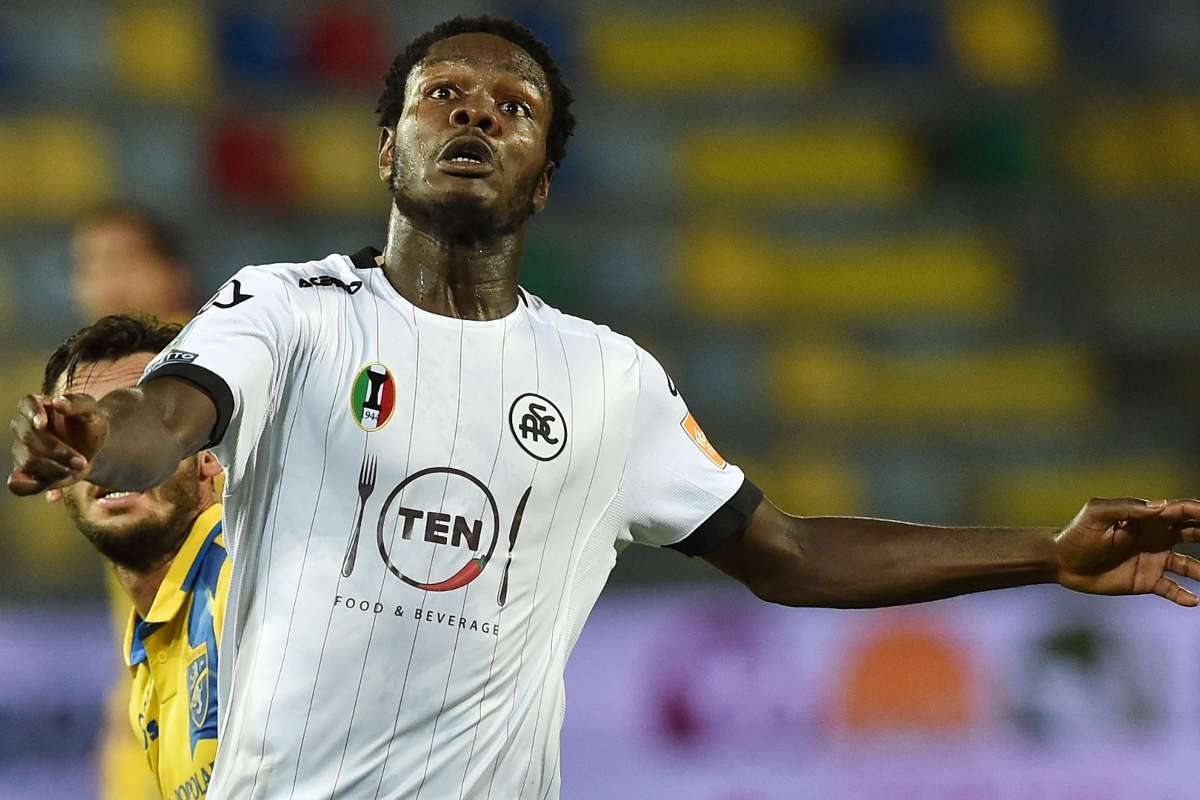 Gyasi was predominantly used as a centre-forward in the opening 12 rounds and he had provided two assists in that period but he was more influential when Italiano moved him to the left side of attack. After Round 18, he scored eight goals and provided three assists, often when he was operating as a left-winger.

M’Bala Nzola arrived from Trapani in January and he was another player Italiano coached previously. He scored six goals in 17 Serie B games, including four in a five-match winning streak and he also found the back of the net in the second leg against Chievo in the play-offs. He is a natural centre-forward but played on the right to accommodate Andrej Galabinov after the Bulgarian returned from his knee injury.

The midfield was rather stable but one particular standout for Spezia was 31-year-old Paolo Bartolomei. He scored twice and provided a career-high 10 assists in 35 Serie B games including a hat-trick of assists in a 3-1 win against Ascoli in Round 24, then he made four appearances and provided one assist in the play-offs.

Spezia was in the play-off spots after defeating Salernitana in Round 19 and the 3-1 victory against Ascoli took them as high as second on the Serie B table, putting them in a position to earn automatic promotion.

Unfortunately, a run of four defeats in seven matches put automatic promotion out of reach, but the Aquilotti lost just once in the final six rounds of the 2019/20 season to cement third place in Serie B. During that late run, they also registered their most comprehensive victory of the league season, thrashing Cosenza 5-1.

Benevento and Crotone earned automatic promotion so Spezia had to enter the play-offs. It had to face Chievo, a team that had eliminated Empoli in a one-off game and had experience in Serie A.

The Flying Donkeys scored twice in the opening nine minutes of the first leg but they decided to hold onto their lead. It was a costly mistake as goals from Galabinov, Giulio Maggiore, and Nzola gave the Spezzini the advantage and Maxime Leverbe’s late penalty for the Veneto club was not enough. Due to the Serie B play-off rules, the Ligurian club progressed to the final due to a higher finish in the league table.

Once again, Spezia had to face another club with Serie A experience in Frosinone to earn that final spot in Italy’s top flight for 2020/21. A solitary goal from Gyasi was enough for the Aquilotti to earn a victory at Stadio Benito Stirpe but their hopes were at risk when Marcus Rohdén scored in the 61st minute in the second leg. 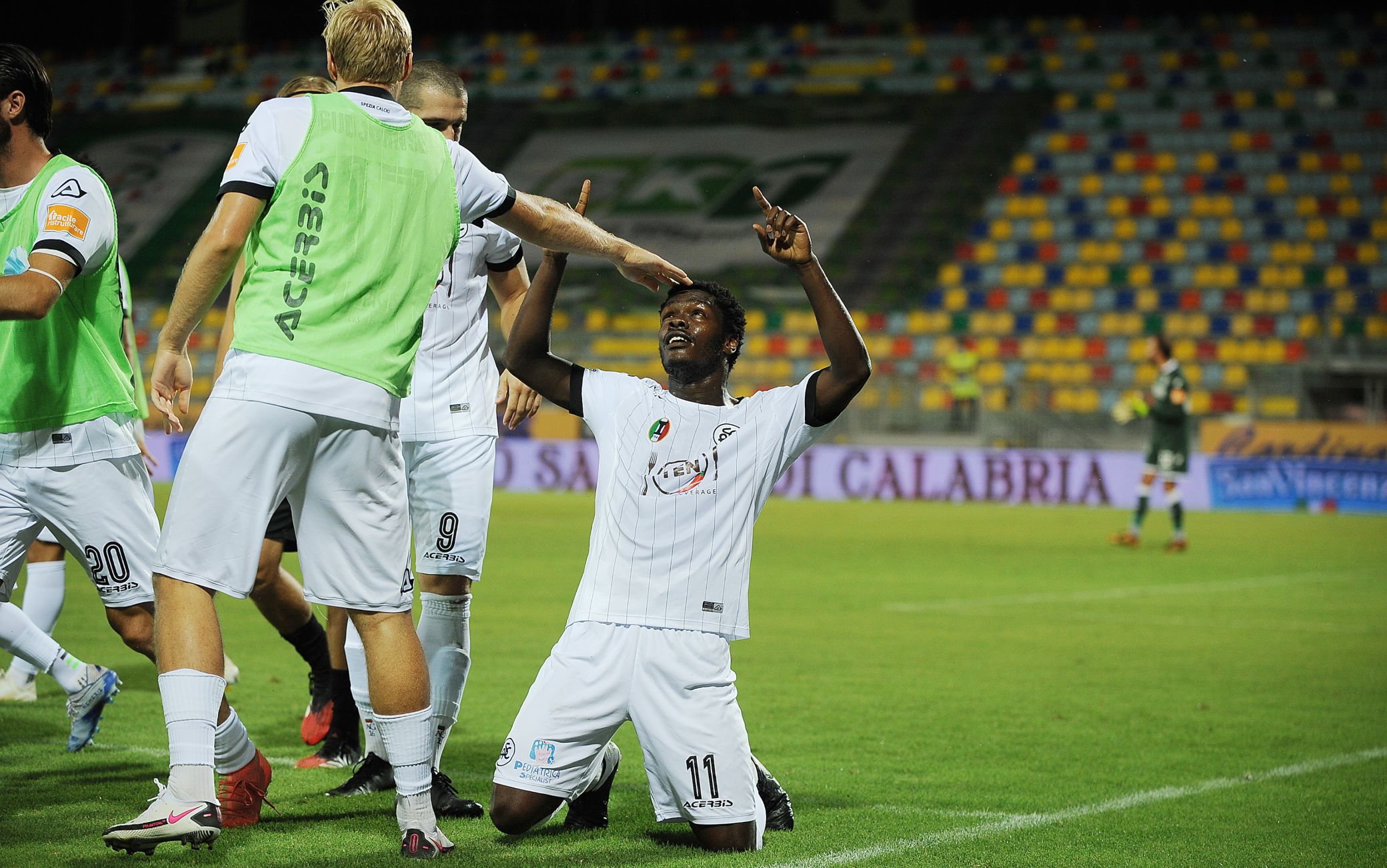 The Canarini were not able to score the decisive second goal they need, with Scuffet making many saves and Vignali – who had lost his spot early on in the season – making a vital clearance in the dying minutes, and the Spezzini finally earned promotion to Serie A after all those years of trying.

Italiano was also chased during the play-offs by Genoa to fill its coaching role for 2020/21 but Volpi demanded €2 million for him and the Grifone settled for former Chievo and Cagliari tactician Rolando Maran.

There has been a change in sporting director as Guido Angelozzi has left and he has been placed by Mauro Meluso, who was at Lecce when it returned to Serie A in 2019/20.

It will be intriguing to see how the Aquilotti will fare in Italy’s top flight because they have not been able to hold on to some of their protagonists and the current squad is lacking in Serie A experience. They are also unlikely to play at their home ground the Stadio Alberto Picco, which does not meet the league requirements.

So far, Spezia will just be relieved to get into Serie A after so many near misses in the 2010s.