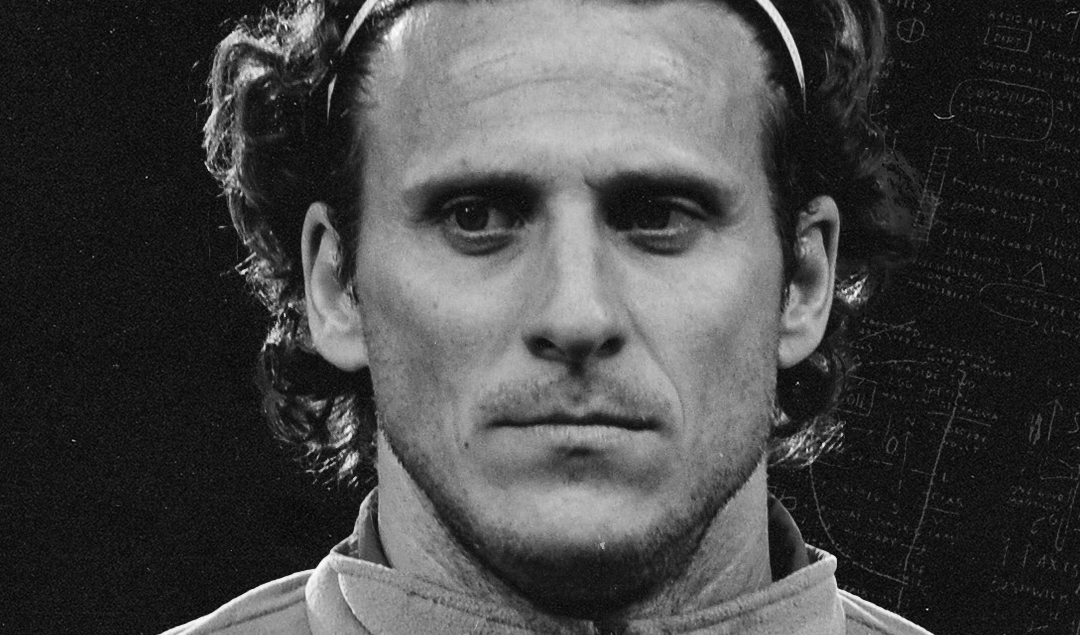 March 7, 2009, La Liga Matchday 26. It is twenty-three minutes to eight in El Derbi Madrileño, and Real Madrid have just turned over possession following an errant corner. Diego Forlán, Sergio Agüero and Simão begin to run like possessed men, as the 20-year-old Agüero exchanges a one-two with Simão and sets off on an audacious counterattack.

On the right wing is the stocky #7, hair tucked into a band, raring at full throttle like a trophy-winning Formula 1 car. He sprints the full 70 yards before arriving at the edge of Iker Casillas’s box. He receives Agüero’s pass with his right foot, takes a deft touch, before firing his shot into the top left corner to put the Colchoneros in front. The previously booming Santiago Bernabéu watches in silence as Forlán, Agüero and Simão delight in the celebration, with Czech defender Tomáš Ujfaluši trailing behind.

Their lead didn’t last long, with Klaas-Jan Huntelaar grabbing the equalizer, but for Forlán, it would be the second in a three-game scoring streak that would see him hit the back of the net against Pep Guardiola’s Barcelona, Juande Ramos’s Real Madrid, and Manuel Pellegrini’s Villarreal. Atlético would be the only team to score four against the all-conquering Blaugranas, with the Uruguayan forward netting a brace.

Born to former Uruguay international Pablo Forlán, Diego began his sporting development as a tennis player on the courts of Montevideo. However, a cruel twist of fate caused him to switch from tennis to football; his sister Alejandra was involved in a horrific car accident which killed her boyfriend and left her in intensive care for five months and handicapped.

At 16 years old, Forlán joined AS Nancy on trial, but the French club opted against signing him. He returned to South America, where he would develop at Independiente in Argentina. A career of goals followed, as Forlán sought solace on the pitch, fighting for his sister every time he stepped onto the pitch. His impressive tally of one goal every two games for Los Diablos Rojos was enough to convince Sir Alex Ferguson to bring him to Manchester United for £6.9 million in 2002.

He struggled to justify his price tag, and departed for Villarreal on August 21, 2004 in an attempt to rejuvenate his career. It did just the trick; Forlán went on to win the Pichichi Trophy with 25 goals in La Liga, while he would share the 2005 European Golden Shoe with Arsenal striker Thierry Henry. A year later, Forlán’s Villarreal reached the Champions League semifinal, only to be knocked out by Arsenal, a penalty miss from Juan Román Riquelme preventing them from experiencing a magical night in Paris.

With Fernando Torres joining Rafa Benítez’s Liverpool, Atlético Madrid replaced their outgoing captain with Forlán, paying €21 million for the Uruguayan forward. He formed a red-hot partnership with teenage sensation Agüero, scoring 23 goals in his first season in Madrid. On May 12, he scored the sole goal against Deportivo La Coruña to help Atlético return to the Champions League for the first time in over a decade.

The Uruguayan late bloomer came into his own in 2008/09, scoring 32 goals in 33 matches to help the Rojiblancos finish fourth in the league. He sowed the seeds for Atlético’s following decade of success and raised the bar for his competitors. Before Forlán, no player had scored more than 30 goals in La Liga since Ronaldo in 1997. Since then, no Pichichi winner has scored fewer than 30 goals in a season. 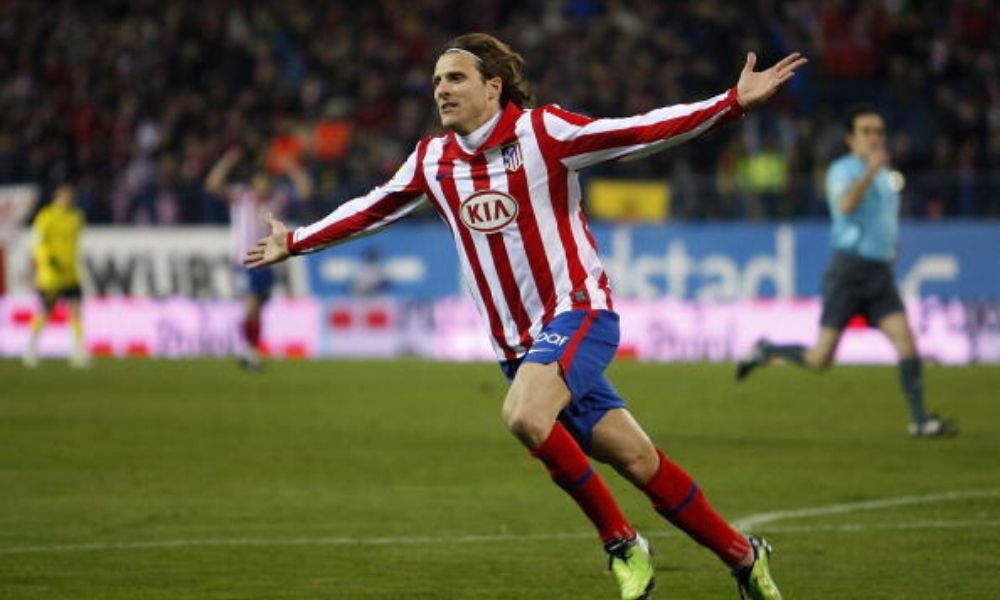 It would be the start of three years of ethereal football and sensational finishes. On October 12, 2009, Forlán scored a stoppage time penalty against Ecuador to pick up a vital three points in the World Cup qualifier in Quito. Uruguay would advance to the CONCACAF-CONMEBOL play-off, where they would defeat Costa Rica 2-1 on aggregate to advance to the 2010 FIFA World Cup.

11 days after his heroics in Quito, Atlético manager Abel Resino was sacked after a run of poor form. Quique Sánchez Flores replaced him, but he struggled in the first few weeks, as Atlético crashed out of the Champions League group stage, finishing below Chelsea and Porto in Group D with a measly three points. Forlán failed to score in the group stage and by December, had only recorded six league goals, a stark contrast to the end of 2008/09, where he had posted the same tally in his last four games.

However, on January 1, 2010, Forlan would wake up refreshed for the new decade and set to achieve golden targets. Eight days later, he grabbed a goal and assist against Real Valladolid as the Rojiblancos thumped Pucela 4-0. Sporting Gijón, Barcelona, Racing Santander and Valencia would fall by his sword in the coming weeks.

It was the prequel to match-winning performances in the Europa League, as he silenced the Türk Telekom Arena with a late winner against Galatasaray to send the Colchoneros to the Round of 16. Atlético advanced past Sporting, setting up a date in the quarterfinals with Valencia, Forlán’s eternal victims. The Uruguayan scored a vital away goal, as Atlético progressed to the semis after winning 2-2 on aggregate.

Liverpool fans would be forgiven for not having any affection for Uruguay before Luis Suárez arrived from Ajax, as it was a dislike festered by Forlán. He put Atlético in the driving seat by scoring an early opener at the Vicente Calderón, as the Rojiblancos grinded out a 1-0 victory in the first leg.

The Reds leveled the tie in Anfield after Alberto Aquilani converted Yossi Benayoun’s cross, before adding a second in extra time via Benayoun’s half-volley. However, Forlán ended their hopes of progressing to the Final in Hamburg by scoring the decisive goal in the 102nd minute, putting an end to Rafa Benítez’s time in charge at Liverpool. 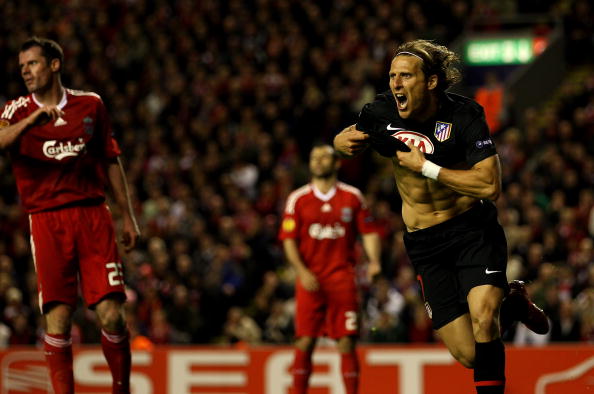 ‘Cachavacha’ netted a brace in the Final against Roy Hodgson’s Fulham, scoring the winner in the 116th minute to give Atlético their first major title in the 21st Century. By the time joined up with the rest of the Uruguay squad for the World Cup, he had amassed 27 goals in all competitions for Atlético. He landed with a chip on his shoulder, an obligation to carry an underdog La Celeste side to glory.

The tournament’s Jabulani ball was notoriously difficult for strikers to hit, for everyone but Forlán, that is. After a stalemate against France in their first group stage match, Forlán opened his tally against the hosts in Pretoria, scoring a rocket from 30 yards out. He added to the Bafana Bafana’s misery in the 80th minute, firing a penalty past substitute goalkeeper Moeneeb Josephs to seal the victory.

Playing on the tip of a three-man attack alongside Luis Suárez and Edinson Cavani, both of whom were 23 at the time, Forlán spearheaded an Uruguay team that topped their group, setting up a date with South Korea in the Round of 16.

Eight minutes in, Forlán collected an errant cross from Cavani on the left, danced past midfielder Kim Jung-woo, and fired a low, albeit weak cross into the center of the box. Goalkeeper Jung Sung-ryong failed to clear it, and it found Suárez, who slammed it into the empty net. South Korea equalized 60 minutes later, but El Pistolero made the difference 10 minutes from time, firing a peach of a shot into the right corner of the net to book Uruguay’s ticket for the next round.

Perhaps the most memorable match of the tournament would come in Johannesburg when Uruguay faced off against Ghana in the quarterfinals. Whilst Sulley Muntari opened the scoring for the Black Stars shortly before the break, Uruguay got a chance for redemption in the 55th minute, when John Paintsil hacked down Jorge Fucile on the edge of the box. Forlán stepped up and hit a rocket of a shot past a helpless Richard Kingston in goal. Uruguay would go on to win 4-2 on penalties, with Forlán scoring the first spot kick for his side. La Celeste met the Netherlands in the semifinal in Cape Town, with Giovanni Van Bronckhorst opening the scoring for the Dutch with one of the goals of the tournament. Forlán leveled the match shortly before halftime, putting Joris Mathijsen on the back-burner before launching a shot past a diving Maarten Stekelenburg in goal.

However, the Oranje took control in the second half, winning 3-2 and ending Uruguay’s underdog campaign. Uruguay faced Germany in the third-place match in Port Elizabeth, where they would once again lose in a 3-2 thriller.

Forlán ended his tournament with a stunner of a goal, hitting a remarkable half-volley that bounced past Hans-Jörg Butt in goal and into the back of the net. He would receive the Golden Ball for his heroics, and would split the Golden Boot award with David Villa, Thomas Müller, and Wesley Sneijder, with each player scoring five goals.

A year later, Forlán achieved immortality by winning the Copa América, his brace in the Final in Buenos Aires proving the difference maker against Tata Martino’s Paraguay. After his father and grandfather, ‘Cachavacha’ became the third member of his family to win the Copa América, giving Uruguay their first trophy since 1995.

Forlán left Atlético a month after his triumph in Argentina, having lost his spot in the team by Radamel Falcao, who joined the Rojiblancos from Porto for a mouth-watering €40 million fee. The 32-year-old joined Inter Milan, where he would replace Samuel Eto’o, who had become the world’s highest-paid player a week earlier after joining Anzhi Makhachkala.

The Uruguayan failed to live up to expectations in Italy, often being played out of position and struggling to fill Eto’o’s vacancy with a miserly 2 goals in 22 appearances. He was released with still one year remaining on his contract, and he would spend the last six years of his career bouncing around from Hong Kong to Brazil to India to Uruguay to Japan, before hanging up his boots on August 7, 2019.