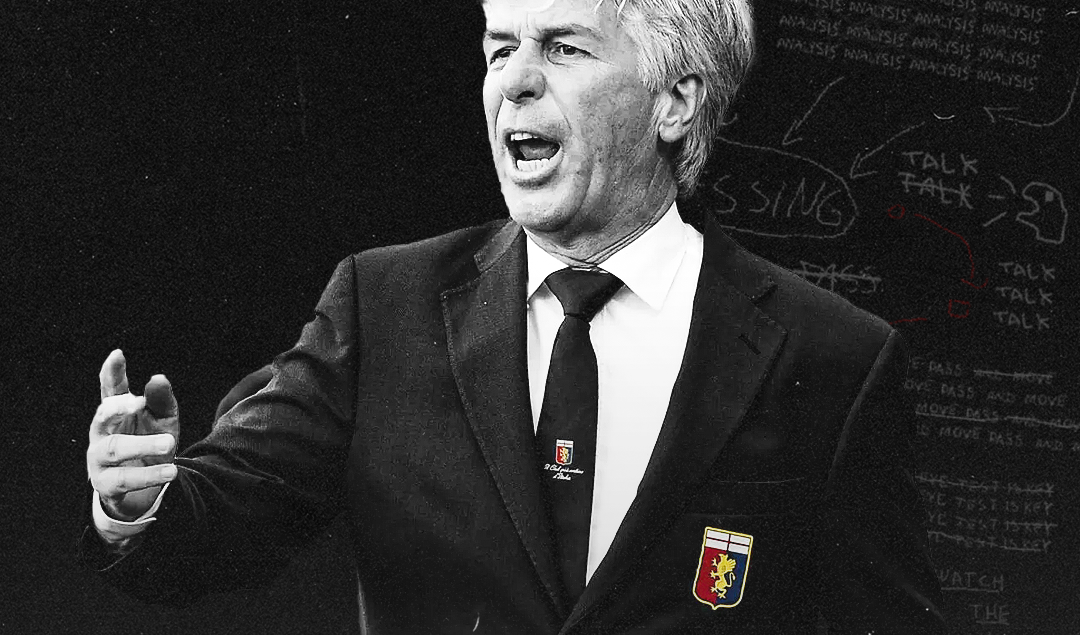 Ever since Gian Piero Gasperini was appointed manager of Atalanta, his exploits in Serie A and the Champions League have made Italy and the rest of Europe take notice. Attractive attacking football, excellent coaching in elevating once underachieving footballers to elite talents and punching above their weights have won many fans at home and abroad.

Such achievements have rightly won Gasperini much praise. Yet it is not the first time he has coached a side that had surprised the giants of Italian football.

In 2006, Gasperini was chosen by Genoa president Enrico Preziosi to take over as manager. Preziosi had ambitious plans for a side that had just been promoted to Serie B from Italy’s third tier. Gasperini’s first season ended in triumph, as Genoa clinched the third automatic promotion spot to Serie A alongside traditional giants Napoli and Juventus. 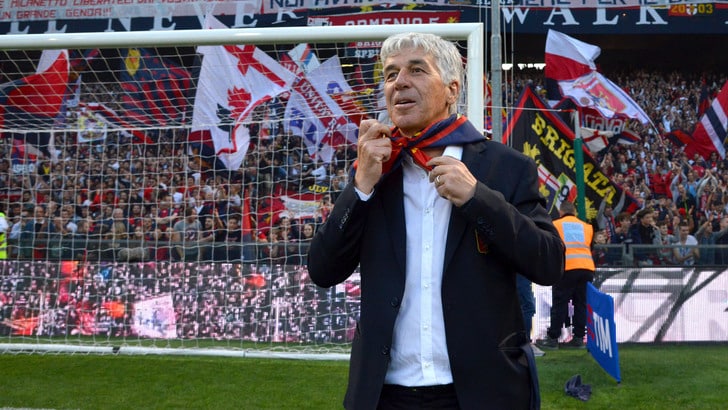 Gasperini utilized his tenets of attacking football with Genoa scoring at least three goals in multiple games. They would average 1.6 goals per league game in Serie B that season, but their attacking approach left them open to and conceded 44 goals. Gasperini’s main formation was 3-4-3 and spoke to Gazzetta dello Sport on why he regularly used that formation:

Ajax was fantastic, played 3-4-3 and the players danced. Everyone on the toes, very coordinated, trained by doing aerobics. After seeing them, I got tired of saying to a full back “go!” and to the other “stay!” so as not to unbalance us.”

As the 2007-08 season approached, Genoa were seen as the likeliest side among the promoted teams to be relegated. That was remedied by Preziosi backing Gasperini by making several signings.

Initially, selling Adaílton seemed an ill-fated move, as Genoa failed to win their first four games, with three draws, one defeat and just a single goal scored. Hovering above the relegation zone, Gasperini’s insistence on playing 3-4-3 finally clicked into gear on the 26th September.

At home to Udinese, Borriello scored a hat trick to win 3-2 and give Genoa their first victory of the season. It would spark a run of three straight league wins that guided them up the table to fifth by late October. 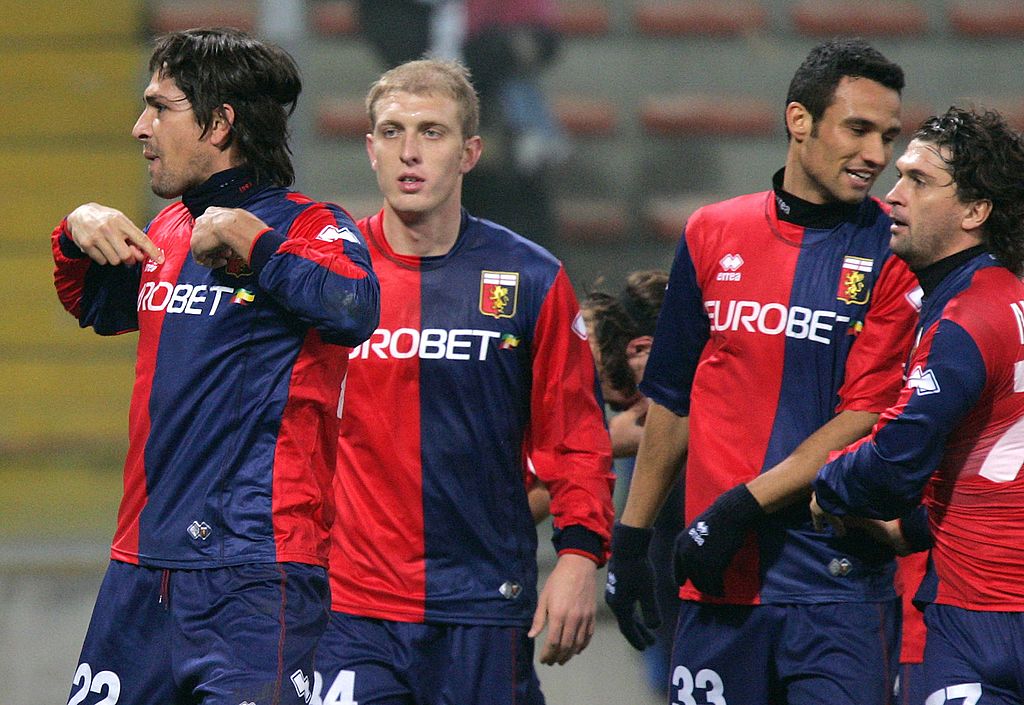 At times during the season, Genoa’s form became inconsistent, losing a few games in a row before redeeming themselves with a mini winning streak. What aided Gasperini was having a spine of reliable players in his squad to execute his tactics under his system.

Rubinho in goal, Bovo and Alessandro Lucarelli at centre back, Paro, Ivan Jurić and veteran Marco Rossi at the center of midfield, Konko as a wing back on the right and Giuseppe Sculli ably supporting Borriello in attack.

Borriello was key to Genoa, superbly leading the attack with 19 league goals, the third highest scorer in Serie A that season behind David Trezeguet and Alessandro Del Piero. His importance to Genoa is underlined by the next top scorer for Genoa in the league after Borriello was Sculli with just four goals.

Gasperini’s use of 3-4-3 at Genoa in Serie A did bring up the same frailties as in Serie B, conceding as many goals as they scored, ending the league season with a goal difference of -8. Nevertheless, despite losing their last four games, finishing ninth was an impressive feat for a side touted for relegation.

Alas, Genoa punching above their weight soon elicited the attention of bigger teams who pounced during the summer transfer window. Several players that helped Genoa maintain their Serie A status would leave the club: Bovo went to Palermo for cash + centre back Giuseppe Biava, Lucarelli signed for Parma where he would begin a famous career for Il Ducali and Konko sealed a big move to Sevilla for €8.5 million. Yet the real blow was losing Borriello, sold to AC Milan for €11.75 million. Selling several first team players meant replacements were needed if Genoa were not to face second season syndrome. With the funds received from these departures, Genoa studiously revamped the defence – in came Sokratis Papastathopoulos, Salvatore Bocchetti along with Biava to reinforce a leaky backline.

Genoa brought in Criscito on loan along with Francesco Modesto to compete for the left wing back role. Meanwhile, Giandomenico Mesto and Anthony Vanden Borre came from Reggina and Fiorentina respectively to play at right wing back. The arrival of Thiago Motta from Atlético Madrid provided added reinforcement in midfield and an opportunity for a fresh start for Motta after a injury-laden time in Spain.

Importantly, to replace the goals of Borriello, Genoa looked to a former player in Diego Milito. The Argentinean had signed for the club in January 2004 from Racing Club. The striker was prolific in Serie B during his two years at Genoa and scored 33 goals in 59 appearances.

Moving to Real Zaragoza in 2005, Milito displayed his goalscoring prowess in La Liga by scoring 59 goals in 127 games. It was Real Zaragoza’s relegation from La Liga at the end of the 2008-09 season that opened the door for Genoa and break their transfer record to pay €13 million for the striker.

Signing on the 1st September, his arrival came at a good time for Genoa, as a day earlier they lost 1-0 to Catania in their league opener. Milito would make his bow in stunning fashion at their next game against AC Milan on the 14th September, creating an assist for Sculli and scoring in stoppage time for a 2-0 win. Milito would score in the next game at Palermo, but defensive frailties once again reappeared for Genoa, as they lost the game 2-1. 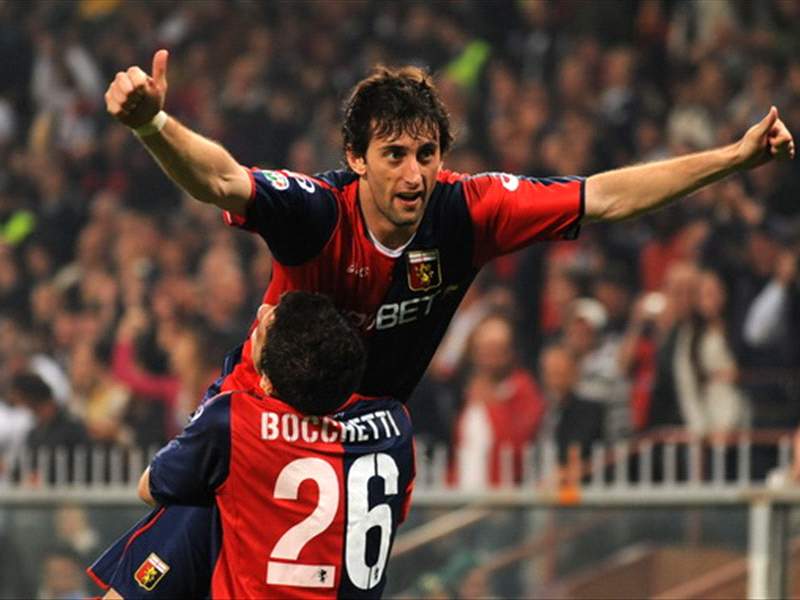 Nevertheless, under Gasperini they rebounded with a brilliant 3-1 win against Roma, Milito bagging a brace to continue his good form. Annoyingly for Gasperini, Genoa again displayed their one step forward/one step back mindset by losing 1-0 to Fiorentina in their next league game just before the October international break.

Residing at 13th in the league upon the resumption of domestic football, Genoa awoke from their slumber, beginning to grow in strength under Gasperini’s 3-4-3 formation. They went on a six match unbeaten run yielding four wins and two draws to lift them to seventh, including stylish wins like defeating Napoli (then in second) 3-2 and thumping Reggina 4-0 where Milito got a hat trick.

Yet it was the two draws away from home that garnered attention – 2-2 against then league leaders Udinese 2-2 and a goalless draw to José Mourinho’s Inter. It was the fixture at the San Siro that led to praise from Mourinho telling Gazzetta dello Sport:

“Gasperini is the coach that put me in the most trouble. I changed, he adapted.”

Genoa’s winning run was halted by a thumping 4-1 defeat to Juventus in November. But rather letting a heavy loss stunt their confidence, Gasperini used it as a wake up call to his players. They reacted by going on a 10-game undefeated streak from November to early February. Their run did consist of five draws, but crucially included five clean sheets that highlight the improvements in defence from the previous season.

While Milito was providing firepower upfront, it was the midfield that displayed added bite. Thiago Motta proved to be a revelation in midfield, shaking off injuries to display such dynamism in midfield. In addition, Jurić provided a strong link to the attack, as by late January, he had already created eight assists.

Climbing up the table due to their attacking football, Genoa’s 2-0 win at Lecce on the 18th January put them into fourth and into the Champions League spots. This was something few journalists or fans had predicted and Genoa under Gasperini were gaining plenty of admirers with such an entertaining style of play.

Their run of undefeated games ended with a 3-0 loss to Roma on the 1st February, dropping them to fifth. Even so, Genoa ably battled on in their quest for European football, winning 14 points out of 21.

Finding their consistency after defeat to Roma, Genoa were still in a Champions League playoff spot in fourth with eight league games to go, merely two points ahead of Fiorentina. Yet their next game was a daunting tie at home to Juventus in second and without top scorer Milito.

Albeit with refereeing controversy, Genoa brilliantly overcame Juventus 3-2 thanks to a brace from Thiago Motta and a late winner from Raffaele Palladino.

Such hopes of a Champions League place were tempered by a 1-0 defeat at home to Lazio and then shockingly falling 2-0 at relegation-threatened Bologna. That defeat allowed Fiorentina to leapfrog Genoa into fourth with five games to go.

The race for Champions League football was tight – Genoa went undefeated in their last five games, with three wins and two draws, Milito in superb form by scoring eight goals in those five matches. But Genoa’s two draws against teams in the bottom half proved costly, allowing Fiorentina to clinch fourth spot thanks to a superior goal difference. 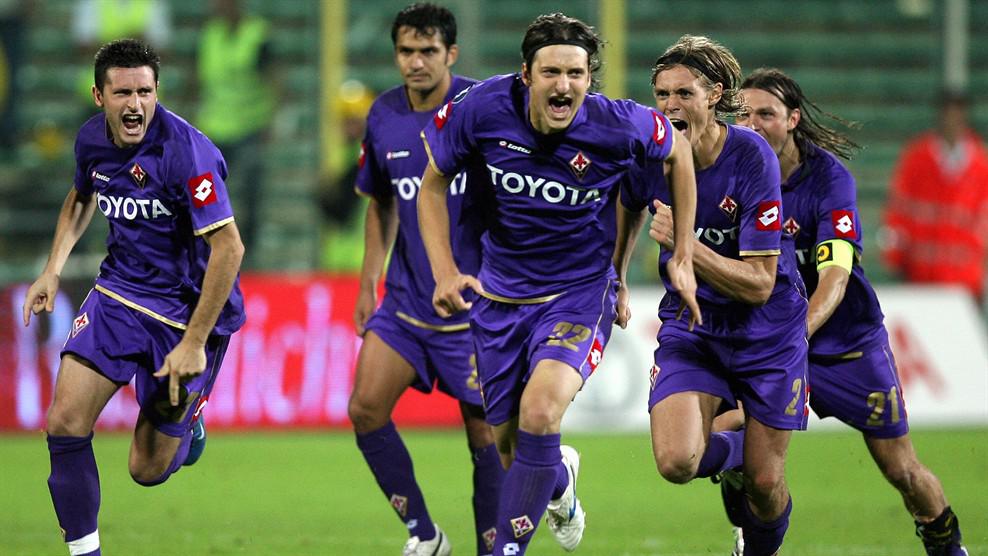 Despite missing out on Champions League football, achieving a place in the Europa League was nothing short of extraordinary by Gasperini. Under his brand of attacking football, he had given Genoa their highest league finish for 18 years.

Players under his coaching flourished – Milito had scored 24 goals in 31 games, Jurić had 10 league assists, the defence had conceded 13 fewer goals from last seasons. Motta, who excelled throughout the season, would have flourishing words for Gasperini in 2016:

“I worked with coaches like Mourinho, Carlo Ancelotti and Rafa Benítez, but nobody like Gasperini. He taught me so much on a human, technical and tactical level.”

Unfortunately, becoming one of the revelations of the season meant Genoa once again came under the prey of bigger teams poaching their best players albeit on a larger scale.

Replacing such quality was not an easy task but Genoa bought in several players such as forwards Hernán Crespo, Rodrigo Palacio and Sergio Floccari to midfielders Alberto Zapater and Houssine Kharja. Defender Emiliano Moretti and goalkeeper Marco Amelia were brought in to bring their transfer spending for the summer to €78.7 million. 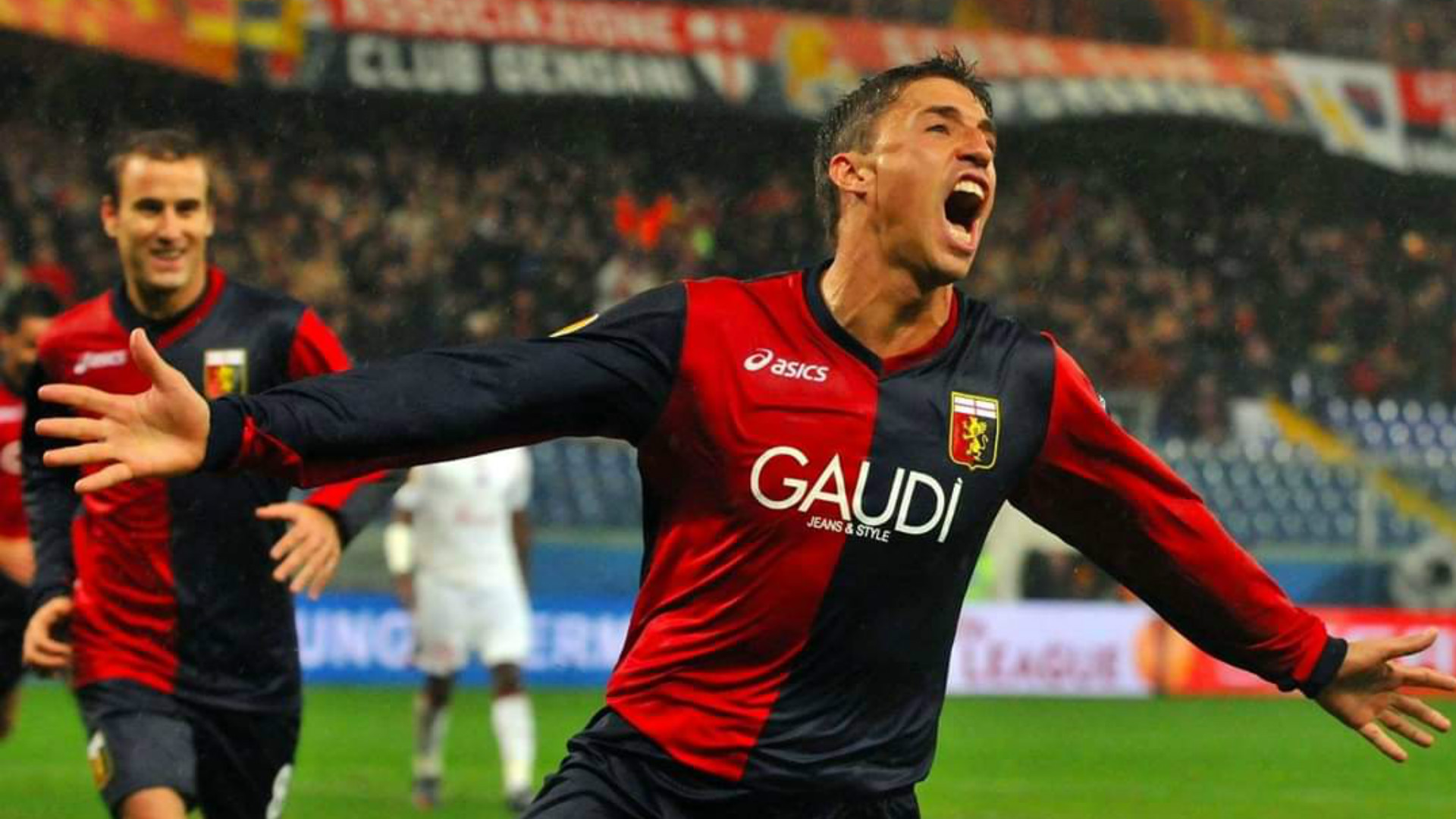 Despite the outlay in funds, juggling Europa League football with the demands of Serie A and replacing the star players of last season proved difficult for Gasperini to repeat his exploits. They would finish the 2009-10 season in ninth, once again conceding as many goals as they scored.

Replacing the goals of Milito proved a difficult task and their top scorer in the league was Palacio with seven followed by Marco Rossi and Crespo with five.

A poor start to the 2010-11 season, gaining just 11 points from their first 10 games that included four defeats in the last five games, resulted in Preziosi sacking Gasperini in November 2010. It was the end of a once fruitful partnership that had turned sour and led to Gasperini becoming one of the most talked about managers in Italy.

It was his exploits at Genoa that got him the Inter job just seven months later. A dream job soon became a nightmare and a string of horrendous results led to his departure after just three months. Few managers would be able to redeem themselves, but Gasperini got back on the saddle.

Spells at Palermo and a return to Genoa for a three year spell from 2013-16 slowly began to repair his reputation so hard earned at Genoa. It would be his move to Atalanta in summer 2016 that led to his redemption and guide  Atalanta to become one of the most entertaining sides in Europe.

Every coach has a beginning that shapes their path and Genoa was the making of Gasperini that led to what is now the high point of his managerial career.