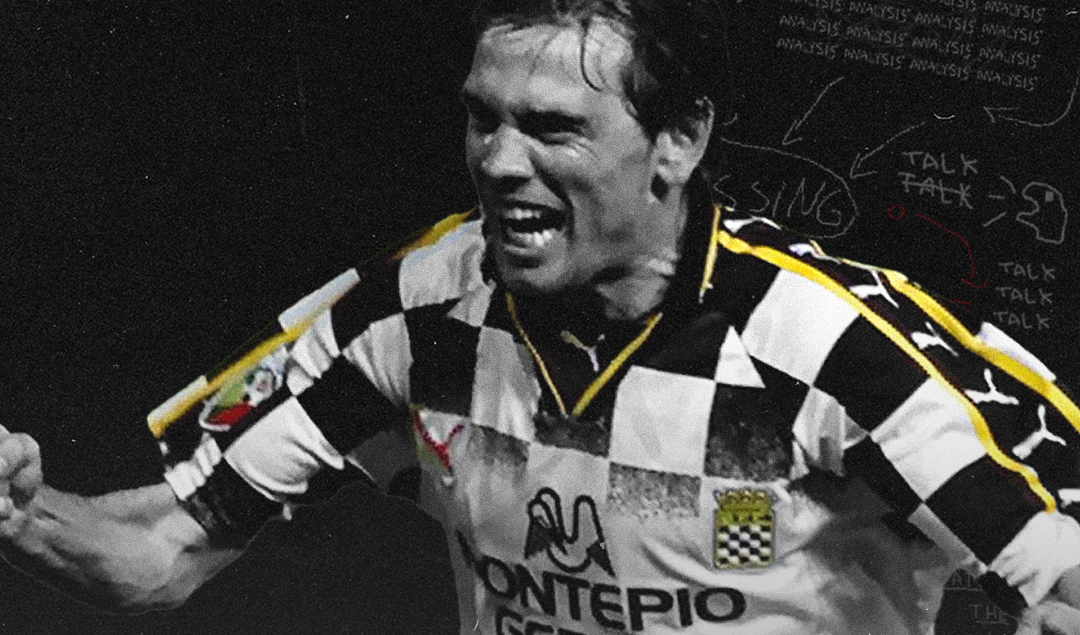 The 1999/2000 season in the Primeira Liga finished in a similar fashion to all the previous campaigns. Sporting Lisbon won the league, four points ahead of Porto, and eight points clear of Benfica. It seemed evident that for the next season the top of the league would paint a similar picture- only differing if the top three were to juggle positions. This had been the case for so long in Portugal- the last a team outside of the ‘Big Three’ won the league was back in 1946 when CF Belenenses were champions. This was soon to change, however.

Boavista FC were founded in 1903 by British entrepreneurs and Portuguese textile workers (hence the chequered pattern). They have yo-yoed through Portugal football division, but they remained firmly in the Primeira Liga in the decades leading up to the turn of the millennia. Boavista’s success in the league did not come to fruition overnight. Their fortunes gradually improved thanks to chairman Valentim Loureiro, who was at the club between 1972 and 1995.

Eventually his son, João succeeded him- it was here when the club’s golden hour had begun. João Loureiro appointed former FC Porto and Portugal midfielder, Jaime Pacheco as their manager in 1997, and soon the club’s league position ascended. They were the team that occupied the place below the ‘Big Three’ in 1999/2000. Despite their position in the league granting them entry into the UEFA Cup Qualifying Round, there was a mild sense of disappointment surrounding the club.

The previous season Boavista had finished second to Porto, accumulating 71 points in the process- 16 more than they managed in the preceding campaign. Still, Boavista’s back-to-back finishes in the top four showed that they were a club on the up and ready to challenge for titles, although, it still seemed unlikely that they would ever get their hands on the coveted Primeira Liga title.

Pacheco’s team certainly had talent. Boavista’s goalkeeper, Ricardo, went on to make 79 appearances for Portugal. At the heart of their defence was Pedro Emmanuel and Litos, with the former going on to win the UEFA Cup and the Champions League. Boavista’s midfield was equally talented- the diamond jewel of it was Bolivian midfielder, Erwin Sanchez, dubbed as ‘Platini’ for most of his career- indicating the South American’s skilful and graceful style of play.

At the base of the midfield was the Portuguese pair of Rui Bento and Petit- who provided an added industry to the team. The latter would go on to play 148 times for Benfica and 57 times for Portugal. The more eccentric players came in the forward positions, Duda, Silva and Martelinho, who offered pace and creativity going forward. Pacheco had created a wonderfully balanced team, filled with dynamism, ingenuity, and a resilience that made them incredibly difficult to beat, and clinical going forward.

Despite this, the club at the time were still in the shadow of the ‘Big Three’ in Portugal. Midfield starlet Nuno Gomes was sold to Benfica, as was the proficient forward João Vieira Pinto. Meanwhile, young forward Jimmy Floyd Hasselbaink was sold further ashore- to Leeds. It did not seem that the club was soon to break the power-fold that had been present for over 50 years in Portugal.

The fact that many of their players were poached by other clubs was unsurprising given how well the Boavista team had been performing, and the lack of financial might that the club had to keep their star assets when bigger clubs came calling. In Portugal, Boavista were dwarfed by the ‘Top Three’ in terms of finances. These clubs could offer players greater salaries, as well as higher quality training facilities.

The record transfer fee of Boavista by 2000 contextualises the lack of funds available. They spent €700,000 on Elpídio Silva. Benfica’s record transfer fee by 2000 was in excess of €6.7 million spent on Brazilian midfielder Roger. The gap between Boavista and the top teams in Portugal was profound- making their achievement even greater.

So how did they do it? It started with a win, a convincing one, beating Beira-Mar 4-2. This was immediately followed up by an emphatic 4-0 drubbing of União de Leiria. A draw and defeat followed, but the club responded like champions beating Benfica 1-0. In what proved to be their crucial part of their season- Boavista went on a 15-match unbeaten run, crucially during this period they were able to beat the city neighbours, and closest challengers FC Porto, once more the scoreline read 1-0, thanks to a 31st-minute goal from Martelinho.

Following a defeat to Braga at the beginning of the year, the club once more responded by not losing in 12 and winning 10 of those games- accumulating 32 points from a possible 36. They had wrapped up the title with a game to spare, which no doubt allowed everyone associated with Boavista to breathe easy, as they faced second-placed FC Porto on the final day of the season. Despite FC Porto thrashing Boavista 4-0, the league title was already secured and the shackles were off- the club had made history.

There were several key parts that made the Boavista machine tick. The defence was solid and robust, and they conceded five goals fewer than any other side, and four of those goals came after the title was already secured. Going forward the team was also clinical, scoring 63 goals.

The vast array of goalscorers that Boavista had typified the collective spirit and attitude of the team. No player scored more than 11 (Silva, Duda), but the whole was greater than the sum of its parts. The quality of hard work and defiance definitely was not lost on Pacheco and the Boavista team. Capello later remarked that, ‘no other club in Europe runs as much.’

Boavista’s famous Primeira Liga win was the pinnacle of their success. Although they did not immediately fall off the pace, the club started to regress in the following seasons. A respectable second-place finish in the 2001/2002 season may have suggested that the club would become a staple at the top of the Portuguese league, as the club amassed 70 points, and conceded a mere 20 goals.

Furthermore, their Champions League campaign put them in the limelight on the biggest European stage. Two draws against Liverpool, as well as victories over Dynamo Kyiv and Borussia Dortmund, enabled Boavista to progress from the Champions League first group stage. Despite failing to qualify from their second group stage, the Portuguese club put in a respectable performance, but fell short to Manchester United and Bayern Munich.

Boavista did progress further in European competition in 2002/2003- this time in the UEFA Cup, but the club were knocked out of the semi-finals by a late Henrik Larsson goal, which prevented an all-Oporto final. This success was not shared on the domestic front, as Boavista slumped to 10th place. Whilst the club enjoyed some success on the pitch, they were struggling off it.

Winning the Primeira Liga and competing in both the Champions League and the UEFA Cup meant that the club had to give out improved contracts and big bonuses. The poor financial situation was compounded by the need to construct the new club stadium (Estádio do Bessa XXI) in time for Euro 2004 which was to be held in Portugal. The Portuguese government failed to live up to the financial support that it had promised for the stadium, and the club plunged into debt.

In 2004 Pachecho was let go by the club, as they once more lurked in the mid-table of the Primeira Liga. But worse was yet to come. In 2008, via the ‘Golden Whistle Enquiry’, it had emerged that both FC Porto and Boavista FC were involved in the alleged bribery of referees in the 2003/04 season. In 2008 Boavista were relegated to the Liga de Honra (Second Division), due to the verdict that the club had ‘coerced’ match officials in three Liga games, versus Belenenses, Benfica and Académica. Former president João Loureiro was suspended for four years, and the club was fined €180,000.

A long five-year spell, battling in both the Liga de Honra and the Segunda Divisão (Third Division) finally came to an end in 2014, when the Portuguese Professional Football League made the decision to promote Boavista back to the Primeira Liga following several judicial reviews, as the club leapt forward two divisions. Around the same time João Loureiro rejoined the club, and he helped to cut the debt from the ‘Golden Whistle Enquiry’ in half.

Under the guidance of former midfielder, Petit, Boavista finished a respectable 13th in the 2014/15 season, as the club looked to consolidate their Primeira Liga status. Since then performances have gradually improved as the club has gone on to finish 14th, 9th, 8th and 8th once more last season.

And whilst the club are miles away from winning the Primeira Liga, fans will be grateful to experience the top Portuguese division once again. Meanwhile, it seems that the ‘Big Three’ are set for another spell of dominance- no club other than Sporting, Benfica and Porto have lifted the trophy since Boavista’s triumph at the start of the millennium.