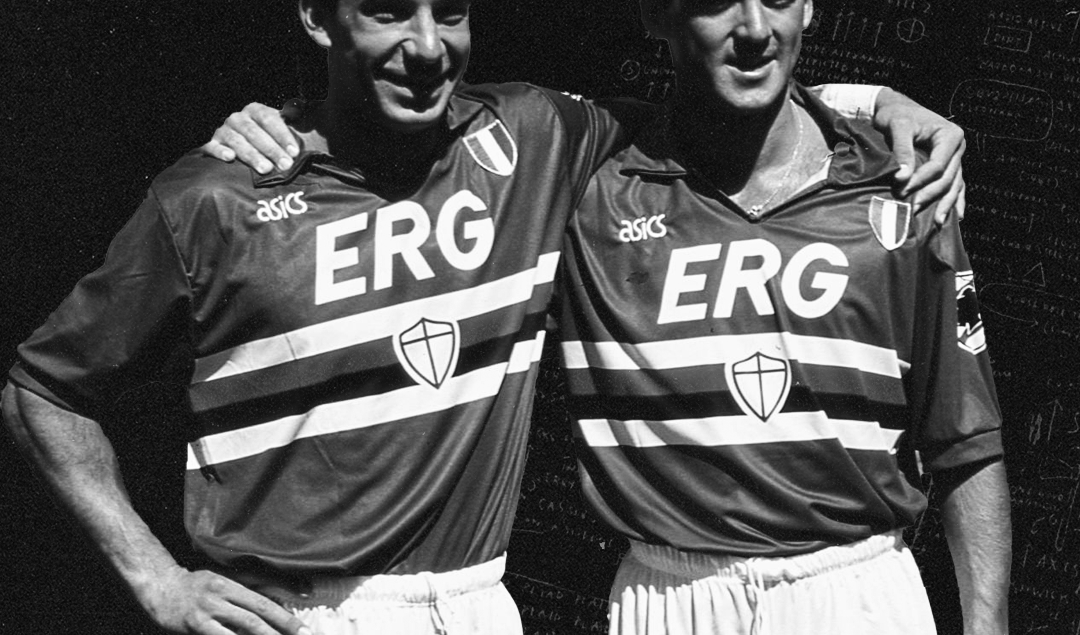 Every team has a golden period that defines their club. Real Madrid have their five European Cup trophies won consecutively between 1956-60, Arsenal have the Invincibles and Manchester United have the Busby Babes. For Sampdoria, their glory years came at a time when Italian football was the toast of European club football.

Ever since Vujadin Boškov was appointed manager in 1986, the Blucerchiati had made tangible progress as a club. Their league finishes for the next four seasons had been sixth, fourth, fifth and fifth again in 1989-90. Consistency in Serie A was also mirrored in the cup competitions, as Sampdoria won the Coppa Italia back to back in 1987-88/1988-89 and lifted the UEFA Cup Winners’ Cup in 1989-90.

Success on the pitch was helped by having stability off the field. The club was fortunate to have such a unique figure in Paolo Mantovani as president. Though a man prone to legal controversy, there was no doubting his commitment to Sampdoria. When becoming president in July 1979, II Blucerchiati languished in Serie B yet under Mantovani’s leadership won promotion to Serie A in the 1981-82 season. 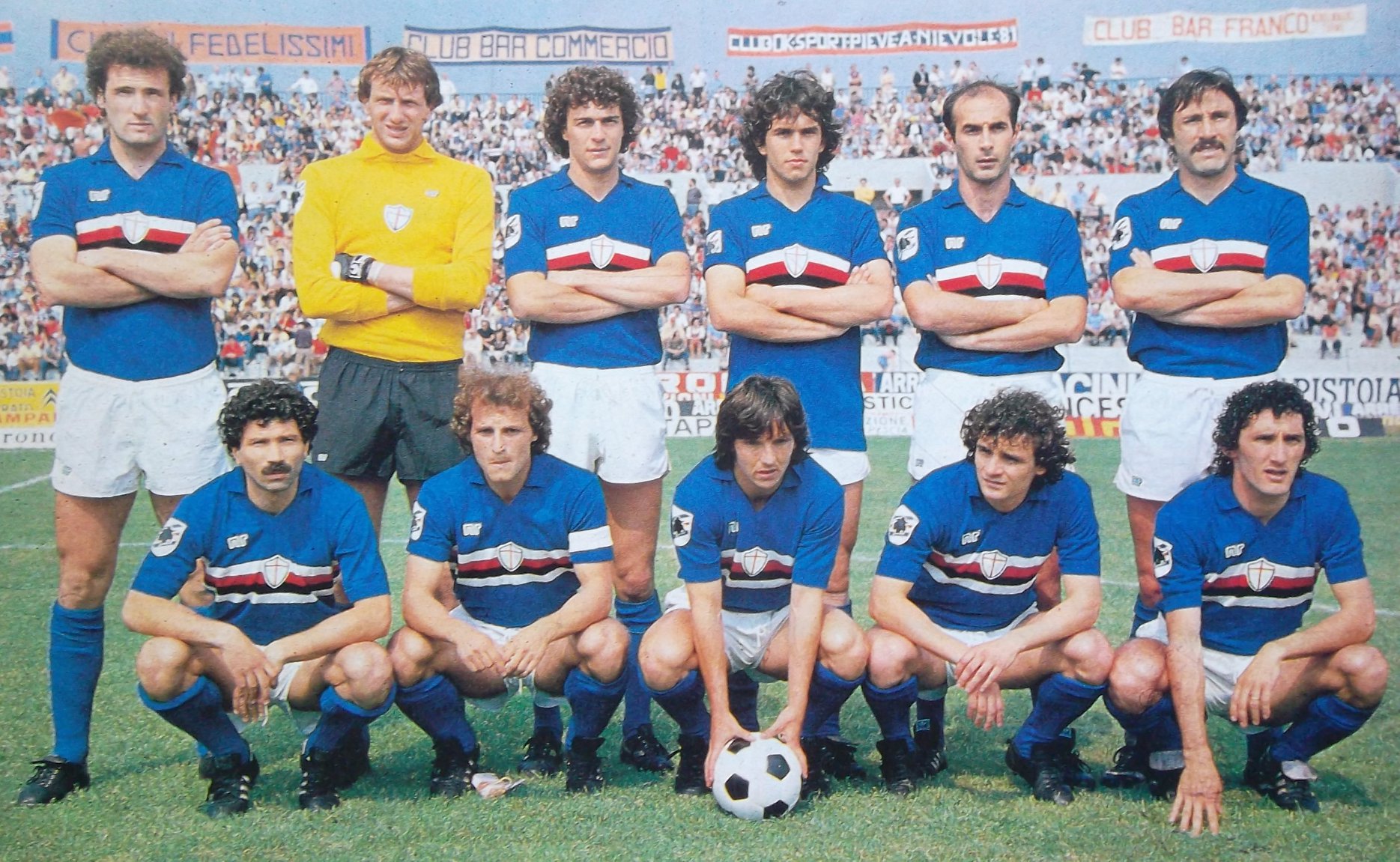 Mantovani would then make a key decision in appointing Paolo Borea as sporting director in 1982. He replaced Claudio Nassi – whose signings helped Sampdoria win promotion to Serie A. Borea would enhance the club by routinely hitting the nail on the head when it came to player recruitment.

Under Mantovani’s ownership, Borea’s excellent recruitment and Boškov’s coaching, Sampdoria had a widely respected team by the start of the 1990-91 season. In goal was the reliable Pagliuca in goal, bolstered by the defensive stalwarts of Katanec and Mannini.

The hard graft of Fausto Pari and Vierchowod helped provide a platform for the creativity of Giuseppe Dossena and Attilio Lombardo. Upfront were Mancini and Vialli, known as the Goal Twins, whose harmonious partnership struck fear into the sturdiest of Serie A defences. 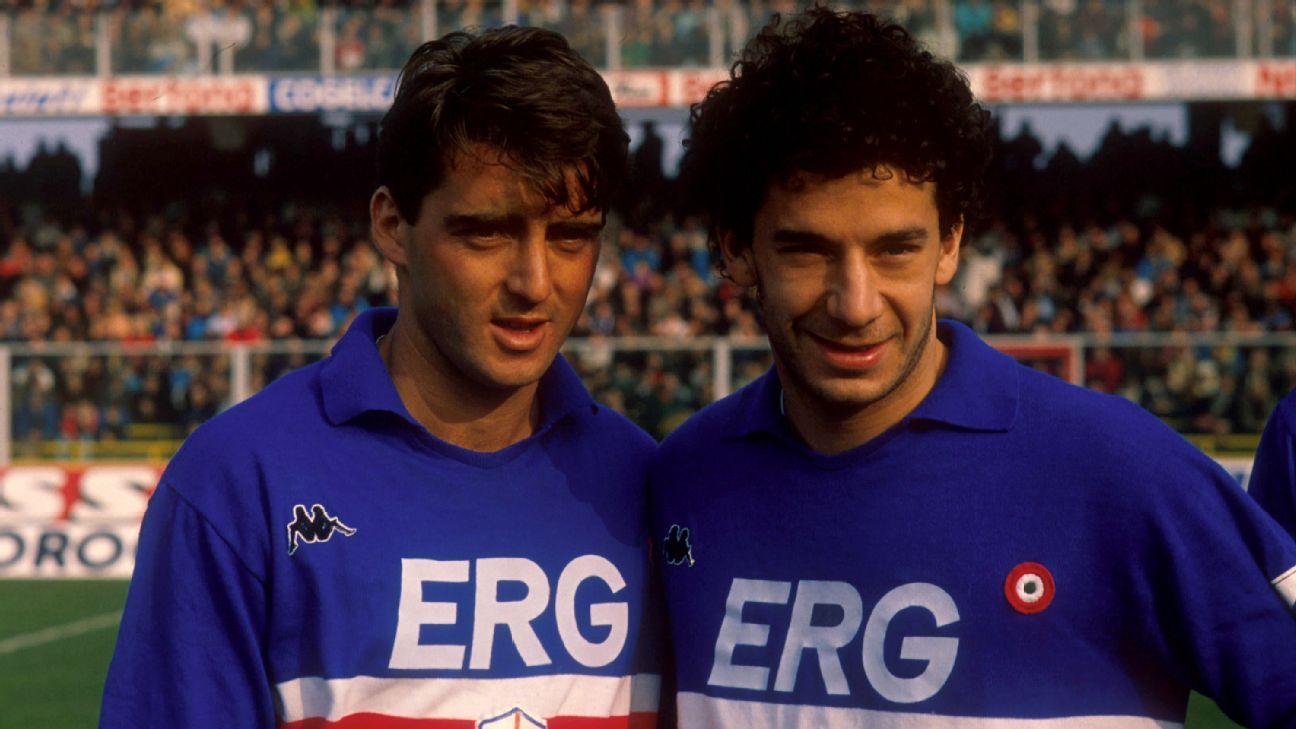 Despite such optimism, Sampdoria had an inauspicious start to the season. Barely scraping a 1-0 win at home to Cesena in their league opener, their next four games yielded three goalless draws and one win. Injury to Vialli, not returning until Matchday 8 against Pisa, did not help matters.

Fortunately, concerns in Sampdoria’s lack of goals were soon dispelled, as they won four games in a row to propel themselves at the top of Serie A. Their unbeaten run included routine wins at home to Atalanta (4-1) then Pisa (4-2) and important victories away to AC Milan and Napoli.

That 1-0 win at AC Milan was built on a strong defence, but also clever interplay between Katanec and Lombardo, releasing Cerezo to score the winning goal. Defeating Napoli 4-1 at the Stadio San Paolo was a statement of intent, but Sampdoria had at times been outplayed by the defending champions. Napoli would pay the price for lapses at the back with Mancini and Vialli each scoring twice.

Frustratingly for Sampdoria, they couldn’t build on those two victories, stung by defeat at home to Genoa (1-2) in the Derby della Lanterna. This was part of a three game winless run from late November-December, suffering draws at Cagliari (0-0) and Bari (1-1). Relinquishing top spot, Sampdoria had the chance to redeem themselves by hosting new league leaders Inter on the 30th December.

Things began perfectly for Sampdoria when Vialli scored within 25 seconds. Optimism would be then met with disaster on 35 minutes when Sampdoria’s summer signing Aleksei Mykhaylychenko was sent off for elbowing Giuseppe Bergomi.

The Nerazzurri took advantage when Nicola Berti equalised before half time and the pendulum seemed to have swung in Inter’s favour. Yet Sampdoria bravely withstood their opponent’s star studded attack of Aldo Serena, Jurgen Klinsmann and Nicola Berti. With eight minutes remaining, Sampdoria had a golden opportunity. The ever impressive Lombardo whipped in a teasing cross into the box, which caused an Inter defender to swipe the ball away with his hand to deny Vialli scoring from close range. Beady-eyed referee Loris Stafoggia spotted the infringement, quickly awarding a penalty and was confidently slotted by Vialli.

Firmly in control, Sampdoria killed the game four minutes later when a wide open Mancini made it 3-1. To beat a Scudetto rival away from home, while playing 55 minutes of the game with ten men, was testament to the players’ character under Boškov.

Yet Sampdoria once again became their own worst enemy by failing to win their next three league games – losing to Torino, Lecce and drawing to Lazio. Dropping to fourth meant some journalists wondered if Sampdoria were falling off the pace again like in previous seasons. Boškov made sure history would not repeat itself by meticulously preparing his team to stop the rut. The Serbian soon reaped the rewards of his labour.

Sampdoria’s 2-1 win at home to Roma in late January kick-started a six game winning streak that lifted them back into the Scudetto race. A solid defence, with an ability to take chances at important moments to edge tight matches, lay behind II Blucerchiati’s surge up the table. 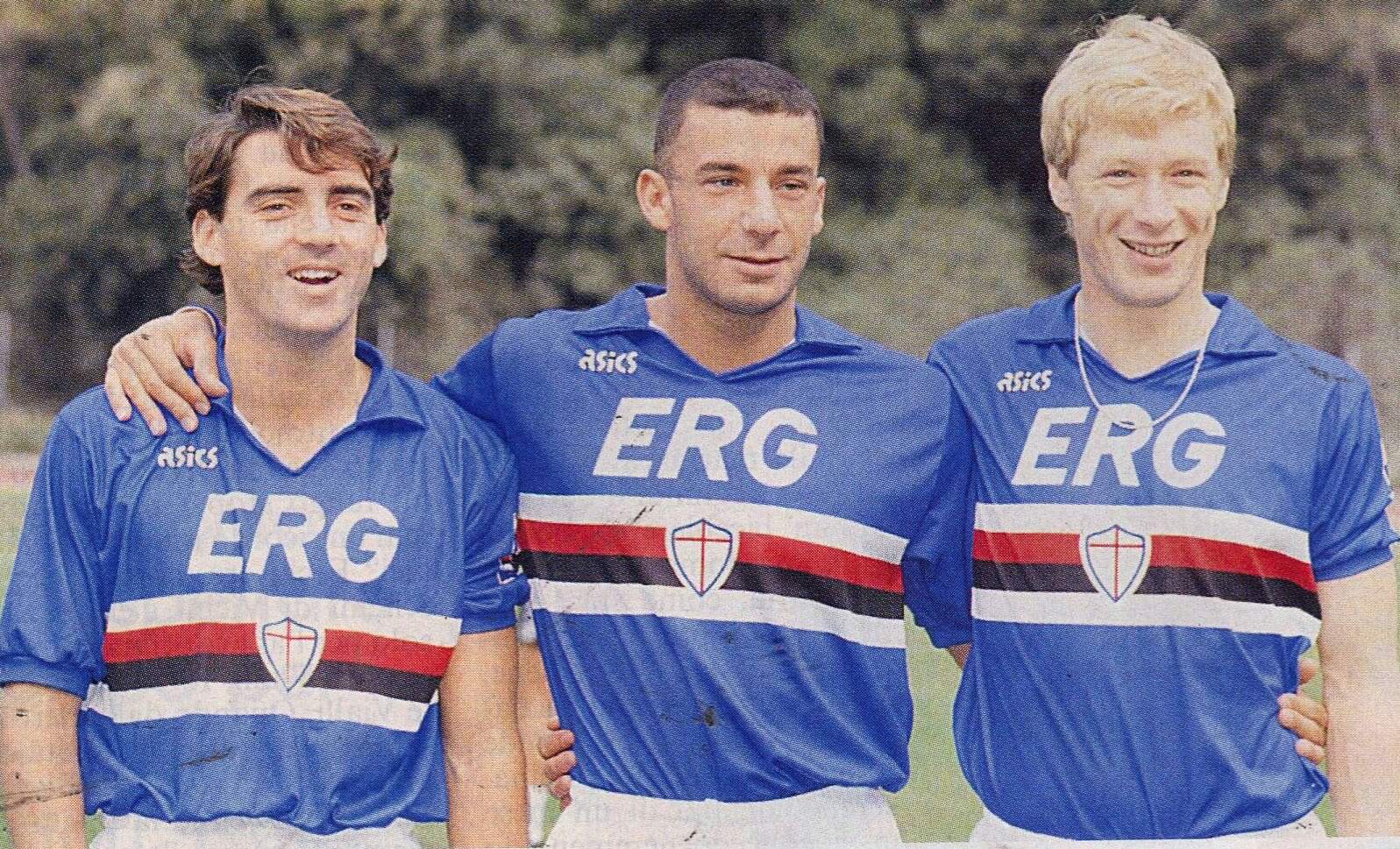 Four of those six victories were 1-0 wins – two of those games won by goals in the 87th and 92nd minute respectively. However, when their winning streak was stopped by a 1-1 draw at Atalanta, the same questions doubting their Scudetto credentials resurfaced.

Sampdoria silenced those critics in the best possible way in their next game against AC Milan on the 10th March. The Rossoneri, at the time European Cup holders, were simply blown away. Vialli opened the scoring by tucking away a penalty brilliantly won by Mancini. Provider soon turned goalscorer when Mancini doubled their lead from a counterattack executed with such lethality under Boškov.

With seven wins and a draw in eight league games, Sampdoria continued their excellent form by dispatching Pisa and then beating Napoli 4-1 again. Perched at the top of the table once more, fans started to believe they could actually win the Scudetto.

However, those dreams were put on hold when Sampdoria drew to Genoa (0-0) in the second Derby della Lanterna and again drew (2-2) at home to Cagliari. Their mini slump ended thanks to a narrow 1-0 win at Roma and a 3-2 victory over Bari.

Those two games proved good preparation for Sampdoria’s biggest game of the season against Inter at the San Siro on the 5th May 1991. The stakes couldn’t have been higher. Holding a three point lead over Inter meant victory would all but seal the Scudetto for II Blucerchiati. Roared on by a tempestuous crowd of over 78,000, Inter attacked with menace almost immediately. Sampdoria grimly held on against the onslaught, with Pagliuca making several brilliant saves. As half time approached, Bergomi and Mancini were harshly sent off for momentarily clashing with each other.

Inter put their opponents under further pressure in the second half only to be again foiled by an inspired Pagliuca. Two-thirds into the game and Sampdoria resembled a boxer peppered with multiple blows yet importantly one that stood firm and waited to strike at the right time.

That moment came on 61 minutes, countering forward after Inter were caught in possession. Vialli calmly played the ball to Dossena who rifled a low shot past Zenga from 20 yards out to silence the San Siro.

In response, the Nerazzurri did the same thing at the reverse fixture in December and poured forward in search of an equaliser. They would have a gilt edged chance when Cerezo brought down Berti in the box. Up stepped Lothar Matthäus to take the penalty only for his spot kick to be instinctively smothered by Pagliuca – who was having the game of his life.

Inter piled forward in search of a goal but that was  where Sampdoria exactly wanted them. Vialli delivered the coup de grace on 76 minutes when he beat the offside trap to go past Zenga and double their lead. Acrobatically celebrating, Sampdoria were kings of the San Siro, beating Inter and AC Milan in the league away from home. 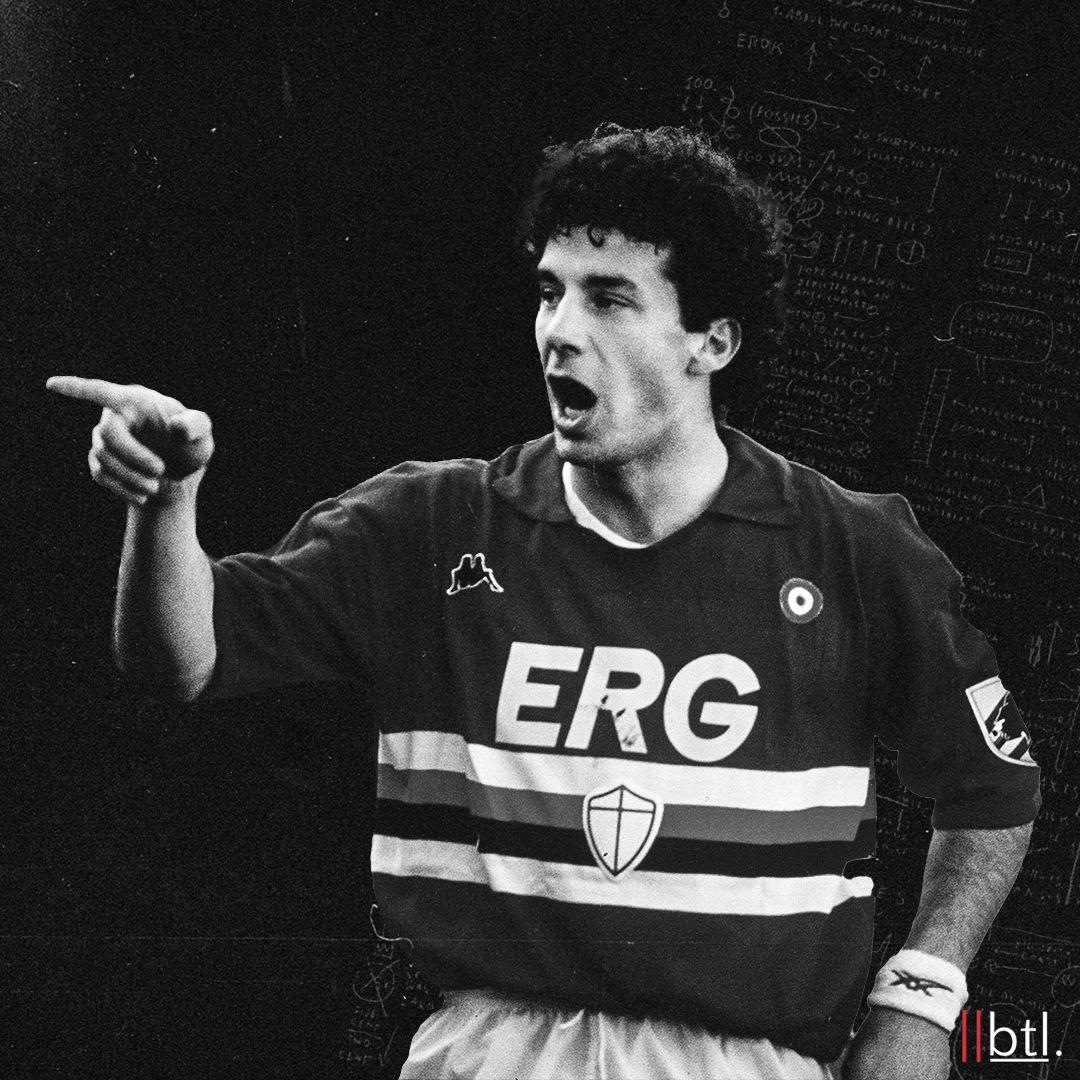 II Blucerchiati’s 2-0 win at Inter expertly surmised Boškov’s counter attacking philosophy. Soak up pressure, exploit the opposition’s mistakes and strike hard on the counter. It was simple, yet brutally effective.

With three league games left, the Scudetto was in their hands, needing just three points. A grinding 1-1 draw at Torino meant victory against Lecce would seal the Scudetto.

Being on the cusp of history meant it was a joyous atmosphere at the Stadio Luigi Ferraris on May 19th. Sampdoria matched the occasion by putting in a performance worthy of champions. Goals from Cerezo, Mannini and Vialli in the first half sealed a comprehensive 3-0 win.

The final whistle was met with boisterous celebrations in the stadium. Flares were ignited, fans waved flags, players and coaches took stock at achieving their Sampdoria’s first ever Scudetto. Drawing 3-3 in their final game at Lazio, despite being 3-1 up, was merely an minor inconvenience.

Several statistics illustrated Sampdoria’s dominance under Boškov during the 1990-91 league campaign. Firstly, they had won the title by six points, impressive when it was just two points for a win. Secondly, II Blucerchiati were the league’s top scorers with 57, as Vialli became Capocannoniere with 19 goals in 26 games.

Mancini scoring 12 meant the Goal Twins accounted for 54% of Sampdoria’s league goals that season. However, though goals win matches, it is defences that win titles. Sampdoria conceded just 24 goals, the second lowest in Serie A, with Pagliuca keeping an impressive 17 clean sheets.

Sampdoria built on their historic Scudetto triumph by going on an equally amazing journey in the European Cup the following season – reaching the final before losing to Barcelona in extra time. However, their league form suffered as a result, though recovered from being in the relegation zone in December to finish sixth.

The end of the 1991-92 season would be the high water mark for Sampdoria, as the team so patiently built was broken up. Boškov would leave in summer 1992 for Roma, Vialli also went at the same time to Juventus and Pagliuca moved to Inter for a then world record fee in 1994. Mancini would stay at the club until 1997 until his move to Lazio.

Sampdoria have failed to reach the heady heights that so exhilarated the city of Genoa in the early 1990s. Despite that, fans of II Blucerchiati will never forget the season of 1990-91 – a Scudetto won through patience, teamwork and belief, arguably the sweetest Scudetto of them all.