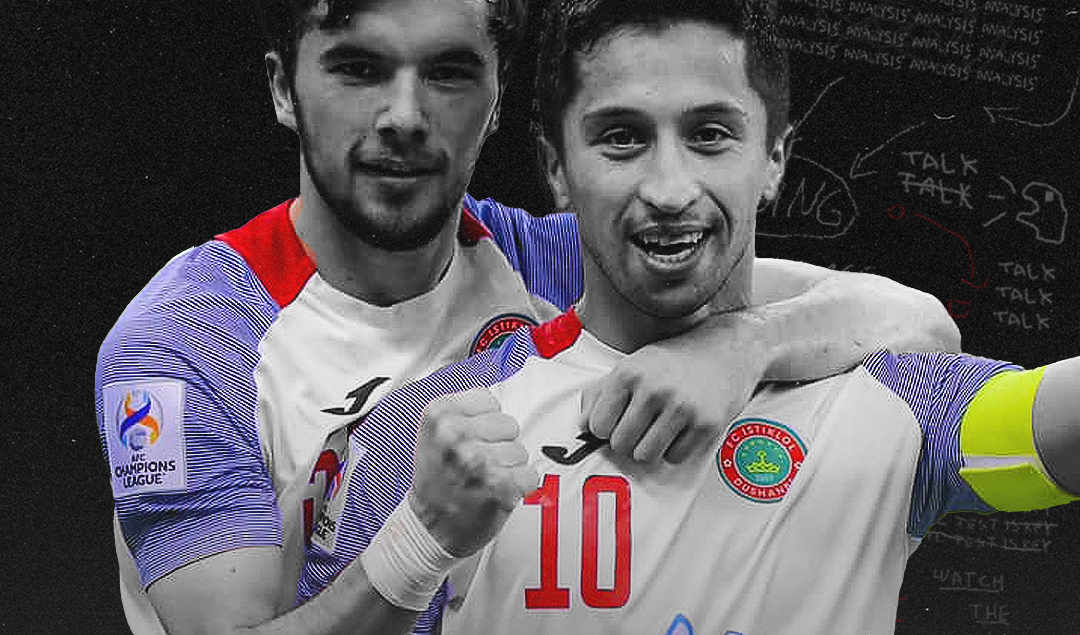 On Friday, April 30, 2021, FC Istiklol became the first-ever Tajik club to reach the knockout stages of the Asian Champions League. This capped off a dream debut in the competition for the Dushanbe-based side on a night of confusing and conflicting emotions; Istiklol were beaten on the night by Uzbekistan’s AGMK in a frustrating game of few chances. However, at the same time, 2019 champions and three-time ACL winners Al Hilal SFC were shockingly beaten 2-0 at home by Shabab Al-Ahli.

Crucially, the Saudi champions’ defeat meant that Istiklol advanced to the knockout stages despite their loss to AGMK. The Istiklol players rejoiced. They celebrated long into the night, indulging in the ruminations of being the maiden representatives of Tajikistan in the ACL knockouts. It was the apex, the fairytale moment that has been thirteen years in the making for this club.

Like most stories, however, there is a lot more than what meets the eye with the club. Their story and what it represents remind us of the various facets of wider culture and politics that football has a tendency to bleed into.

Last October, the authoritarian leader of Tajikistan, Emomali Rahmon won his fifth straight presidential election. He holds the distinction as the longest-running, post-Soviet autocrat in power longer than Belarus’s Alyaksandr Lukashenka. The election last year was the first since his main political opposition, the Islamic Renaissance Party (IRPT) was outlawed by the country’s supreme court as a “terrorist organization”. Much of that party’s leaders and officials have been since imprisoned or fled the country.

The Social Democratic Party provided the only viable opposition in 2020, however, they boycotted the election in protest of what they have seen as an unfair electoral process in which their leader, Rahmatullo Zoirov said “there is no point in voting, even if one votes against all the candidates, the CEC will pronounce its own numbers and results.”

Whilst all of this is noisily rumbling on in the background, Emomali’s son Rustam Emomali has been rising through the ranks of power within parliament in Tajikistan. It was heavily rumored in 2016 when Emomali lowered the minimum age for presidential candidates to 30, (when his son was 29) that he would eventually fill in as the next leader of Tajikistan after his father eventually leaves his role.

In the long, controversial history that is Emomali’s autocracy, there is a history of allegations against the Tajik government of fraud, of unfair elections (of which the last five have not been deemed free or fair by Western monitors) as well as suppressing dissent from the public and the elimination of political opposition. In addition to this, former Tajik political activist, Sharofiddin Gadoev has accused them of abduction and torture.

Gadoev was a member of a banned opposition group called Group 24 and after fleeing the country in 2012 to reside in the Netherlands, he returned in 2019 after visiting Russia. He claims he was abducted in Moscow by police who taped his mouth shut and covered his face with a bag. He also said he was beaten in the back of a van before being taken to meet Tajik officials on a flight back to Dushanbe from Russia.

He claims that the Tajik officials ordered him to denounce his associates in the now-outlawed IRPT whom he had gotten to know while exiled in Europe. He has also claimed he was beaten once again while in Tajikistan after being taken to the basement of the interior ministry’s criminal investigation department. There, he said, his life was under threat if he wasn’t cooperative with the Tajik government.

To add to this, Gadoev alleges he was told that the plan for him and the other 17 members of Group 24 who had resurfaced in Tajikistan, was to start supporting the policies of President Emomali Rahmon and his son Rustam. “They mentioned that ‘Rustam Emomali will take part in the 2020 election and you will support him”, Gadoev said in an interview with RadioFreeEurope/Radio Liberty.

As a very keen footballer, when Rustam graduated from university, he co-founded FC Istiklol in 2007 and quickly became their star striker and captain. This was the same year Rustam followed in his father’s footsteps in changing his name, dropping the ‘Rahmonov’ and replacing his surname with his father’s first name. FC Istiklol hit the ground running in Tajik football, winning the Tajik cup in 2009 and then won their first league title in 2010. It is fair to say it was filled to the brim with dissension and controversy.

As mentioned earlier, Tajikistan’s authoritative approach sometimes has within it, an inbuilt tendency to suppress. Protests in Tajikistan are extremely rare and violent outbursts from the public are not met well by the government. However, when Istiklol won their second league title, fans of their rivals Ravshan Kulyab, were incensed. In particular, two games underlined the fans’ rage. Ravshan Kulyab played Istiklol on May 1, 2011 and the two sides were separated by a late winner by Istiklol from a dubiously awarded free-kick. Mass riots ensued afterward between the teams and the supporters.

Just six weeks later, the two met again. Istiklol won yet again and this all but sealed their first league title. Again though, the game was draped in contentious officiating, with Istiklol being awarded a last-minute goal that enraged Ravshan players and fans. The players’ bus and cars were targeted after the game, fans clashed with police, players, and officials. The police fired their guns into the air, the assistant referee was struck in the head by a stone and the Istiklol team bus was attacked. This all resulted in 40 Ravshan fans being detained, a fine for the club and a five-game ban from being able to play at their own stadium.

What sent shockwaves through Tajik football was that these riots, while not originally politically motivated, had clear political undertones. These fans were fully aware that Istiklol’s club captain was their president’s son, on a fast track to becoming his father’s successor. At the next game, Ravshan played CSKA Pamir. They won the game but fans still decided to take to the streets in protest of the treatment from the Tajikistan Football Federation (FFT), of which Rustam Emomali was the vice president at the time.

The police again fired their guns into the air and into the ground in an attempt to control the protesters and disperse the crowd. The government acted very fast in increasing punishment for ‘hooliganism’ and new legislation that ensures that ‘organizers and participants in unsanctioned rallies, meetings, demonstrations, pickets and marches will be fined or face up to two years in prison.”

This violent display by fans did not start as politically motivated, but it certainly ended that way. It became an outlet to vent frustrations and a test to see how authorities would act to the release of that pent-up anger. Rustam was then elected as the FFT president at the beginning of 2012 and later became a member of the development committee of FIFA. After being elected president of the FFT, he left Istiklol and since then has no official connection to the club.

After winning their first title in 2010, they retained the title the next season with a points total of 108. Currently, they are the champions of Tajikistan and have been since 2014, winning every year since then. Additionally, between 2009 and 2019, Istiklol either won or finished runner-up in every Tajik Cup tournament.

In 2012, Istiklol won their first and only piece of continental silverware, with the AFC President’s Cup. This particular tournament was, in its nine-year history, supposed to target ‘emerging nations’. Countries deemed ‘mature’ and ‘developing’ were entered into the AFC Champions League or the AFC Cup. They won this trophy in its third last year against Palestinian side Markaz Shabab Al-Am’ari in a tense final that ended 2-1.

Subsequent to this, Istiklol finished runners-up in two different AFC Cup finals, in 2015 against Malaysian side Johor Darul Ta’zim and in 2017 against Iraqi side Al-Quwa Al-Jawiya. The next logical step now is further continental competition. This year, for the very first time, Istiklol qualified for the AFC Champions League proper after failing to get past the qualifiers previously.

Subsequent to being drawn into a group with Shabab Al Ahli, Al Hilal and Uzbekistan’s AGMK, an official from Istiklol told Arab News “We will think about how to play Al-Hilal later, for now, we are excited to face one of Asia’s biggest and best teams”. This definitely lent itself to the idea of Istiklol being the underdogs who are completely aware of their status as just that.

In many ways, they were the perfect opposition to exploit Al Hilal’s flaws. Everybody expected the Saudi giants to steamroll their way through the group, perhaps even winning every game. It did not pan out this way.  On matchday four of Group A, after Istiklol had already made history after beating AGMK in the central Asian derby and been humbled 3-1 by Al Hilal in the first game between those two, Istiklol would take on Al Hilal in the reverse fixture for a game that will live long in the memories of Asian Champions League fans.

After dominating the early stages in which they hit the post, Al Hilal took the lead 23 minutes in courtesy of their star striker and living legend, Bafetimbi Gomis. This didn’t seem to worry Istiklol too much however, as 15 minutes later they grabbed an equalizer after a great run into the box and cross by their captain, Alisher Dzhalilov, found an unmarked Manuchekhr Dzhalilov to make it 1-1.

After this, Istiklol never looked back. They produced a counter-attacking display that any manager would’ve been proud of. Alisher Dzhalilov starred; he only got one assist in the match but he instrumental as part of Istiklol’s rigid 5-3-2 defensive setup. In addition to this, his ability to link the Manuchekhr and his strike partner, Rustam Soirov, into attacks proved to be a great outlet for Istiklol.

The Tajik side’s defensive resilience, pace on the counter-attack and ability to exploit spaces that were being continually left by the Saudi champions seen them run out 4-1 winners. Al Hilal left the pitch with 77% possession of the ball, 19 shots but with only the embarrassment from the humiliation at the hands of the underdogs to feel. A stark contrast from the recent success the club has enjoyed in this competition.

After match day sixes’ mix of confusing, disappointed but elating joys for Istiklol. On a night in which they were beaten by AGMK, trapped in a football-purgatory waiting on the final whistle in the Al Hilal match and experiencing the jubilant highs in confirming that they had indeed progressed through to the last 16 of the AFC Champions League.

This is the biggest moment in Tajik football, particularly on the continental stage in club football. They will now face the Iran giants of Persepolis, who lost the final last year and in 2018. This year they will be looking forward to righting those wrongs and going one step further.

For Istiklol, on the other hand, they have already taken more steps than they could have possibly imagined. They have nothing to lose at all; they are playing for pride, the occasion and that could possibly give Istiklol the psychological advantage going into this round of 16. They are playing with no pressure and Persepolis, while being heavy favorites for a reason, will do doubt be cautious after seeing what this team is capable of doing against another one of Asia’s footballing giants.