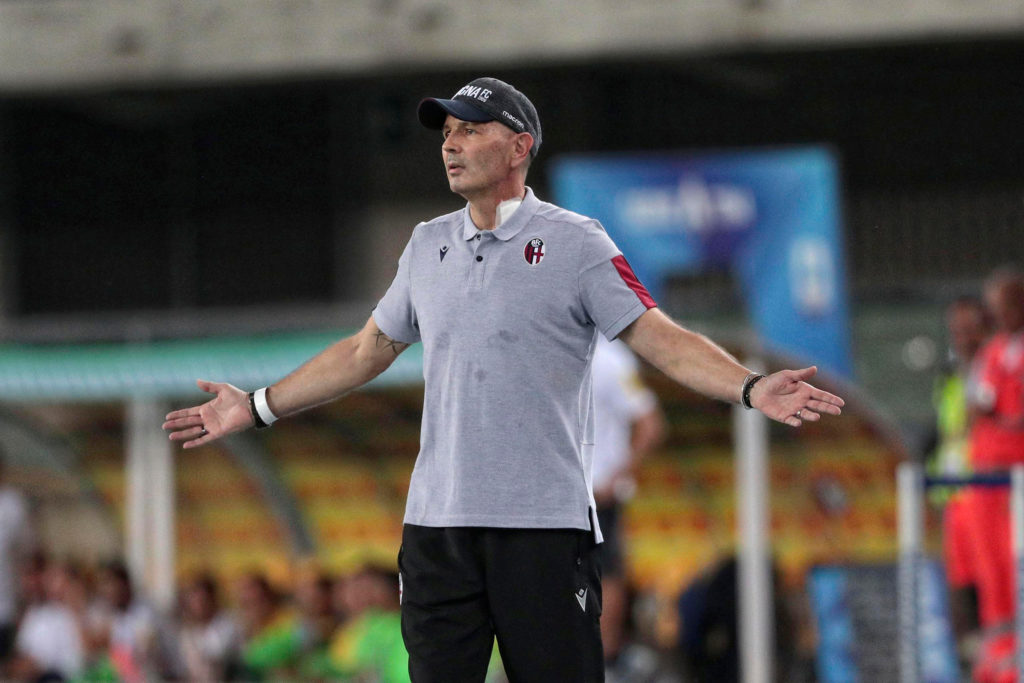 On January 28th, 2019, Sinisa Mihajlovic got appointed as the replacement of legendary Italian striker, Filippo Inzaghi, for Italian club Bologna F.C. The team where he once started his managerial career back in 2008, after having been Roberto Mancini’s assistant manager for two years at Inter post-retirement.

Up until Inzaghi was relieved from his duties Bologna had only managed to collect 14 points from 21 games and resided in 18th place in the relegation zone. But, lucky for Bologna, is Mihajlovic a manager who never fears a great challenge or any kind of adversity.

His first game in charge embodied both a great challenge and adversity. Third placed Inter – away at the San Siro. But it marked what was coming under Mihajlovic reign, a fight strong team with the capabilities to grind out wins with the mentality of never giving up. Bologna won the game 1-0 with a goal on a corner from Federico Satander, and from the coming games, regardless of the outcome, you could see that Bologna believed in themselves, knew what they were capable of and that they were reborn as a team.

Throughout the second half of the season, Bologna won 9, drew 3 and lost 5 of the remaining 17 games and comfortably secured a Serie A contract for the 2019-20 season.

In the summer of 2019, the atmosphere around the club, the team and the city of Bologna was more positive than in years. Nicola Sansone, Riccardo Orsolini, Roberto Soriano and Danilo who had been key parts to the turnaround the season before was signed to the club permanently. And on top of that Bologna managed to recruit skilled Dutch defender Stefano Denswil from Club Brügge and some highly rated talents from across Europe:

But then the summer took a dark turn. Ivan Zazzaroni of Corriere dello Sport, and a close friend of Mihajlovic, broke a story on the night of the 12th of July that the Serbian tactician would make a statement on the day after and could be forced to leave his job as the manager of Bologna due to a serious illness.

Bologna scheduled a press conference 16:30 local time at their base, Casteldebole, the day after as Zazzaroni had revealed, where Sinisa Mihajlovic revealed that he had been diagnosed with a “severe form of leukemia” after having had flu-like symptoms and a fever the week before. He had also been advised to start aggressive treatment as soon as possible.

All the sounds of cameras taking pictures and fingers hitting keyboards stopped. Barely a sound could be heard at the press conference. Mihajlovic continued speaking, explaining what the doctors had said, what his condition meant, but then he stopped. His lips were shaking. A man seen as a warrior in Italy and a very, very highly respected man, was pouring his heart out but was on the verge of tears and was at a loss for words. Then applauses started ringing out throughout the press room.

“I always play to win, both in football and in life. And I will defeat leukemia too”, Mihajlovic said whilst holding back his tears and continued: “These are not tears of fear. I respect the illness, I will face it, with my chest puffed out, looking it in the eyes, the way I always have done.”

Mihajlovic vowed to stay on as Bologna manager as he fought his very own personal battle, showing that he’s as much warrior off the pitch as he once was on it. These actions did not only amaze the journalists in the room, but Bologna fans and football fans worldwide. Perhaps most of all his own players and staff.

After the first three game weeks of the 2019-20 Serie A season, Bologna resided in 2nd place in the league. In game week 2, Bologna’s home opener against SPAL, Sinisa Mihajlovic was back. He had left the hospital to be there and help his men to the victory. The Stadio Renato Dall’Ara was electrifying when he entered the pitch. A very tired looking man, visibly suffering from his treatment, was met with very intense applauses, chants, pyrotechnics, banners of support and applauses from his own players for being there whilst he was fighting the biggest battle of his life.

Bologna dominated the game against SPAL, but they didn’t have the luck on their side. However, Bologna never gave up. In the 93rd minute, finally, Roberto Soriano found the net and won the game for Bologna. You could see on his face how much it meant to Mihajlovic, and you could see on the celebrations how much it meant to the players to show up for their manager in the same way he showed up for them.

Perhaps the most beautiful story so far comes in game week 3. Bologna were 2-0 down away to Brescia after 19 minutes and 3-1 down in half time. Sinisa Mihajlovic followed the game from his hospital bed whilst receiving treatment back home in Bologna – and he was not pleased. As a result, he rang the team up at half-time via video link to give them a pep talk and speak his mind. The result? Bologna scored 3 goals in the second half, winning the game 3-4.

“Mihajlovic was furious at half-time,” Rodrigo Palacio said after the match. “He passed that message on to us, so we tried to use that mentality when we got back out there. It’s thanks to his mentality that we play like this.”

On the way home from Brescia, having secured a win through a magnificent comeback, Bologna’s team bus drove to the Sant’Orsola Hospital were Mihajlovic were staying. They stood on the pavement outside and started chanting his name outside of his window, and the Serb looked out his window to see his team with a surprised and emotional face.

That’s what so special about Mihajlovic and Bologna. They make each other stronger. The team gives Mihajlovic strength to carry on his battle with leukemia, and the strength Mihajlovic shows whilst doing that inspires the team and gives them strength to never give up on the pitch.

“The Coach will win this battle for us too, as we feel like we are his family.

What he has given us over the last six months has rarely been given by any Coach, especially in such a short space of time. We know what kind of person he is, how strong he is and we’ll try to transmit our strength to him too. We can’t wait until he returns.

Sinisa told us to continue working with a smile on our faces and we’ll try to do exactly as he asks. The Coach showed us the way, we followed him throughout the last six months.

He is a leader who can take us to achieve our objectives. Of course, nobody expected this to happen, but we are all close to him. Mihajlovic is like a father to us, so we’ll fight for him the way he fights for us.”.