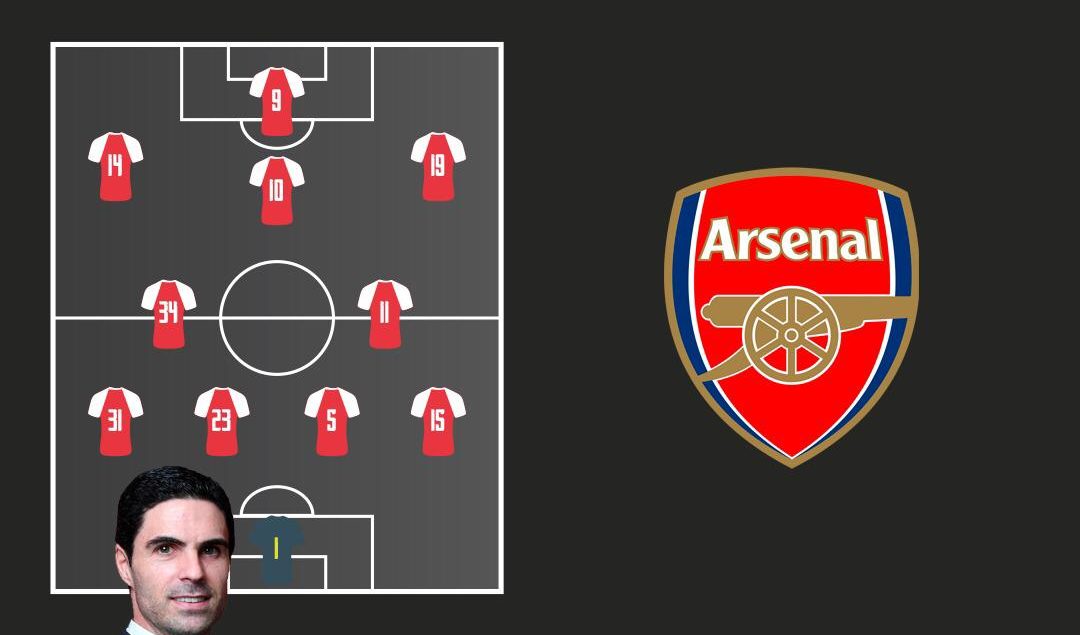 It’s often considered difficult to consider how a new manager will do at a club, particularly in the case of Mikel Arteta. A coach at Manchester City, the most successful English club of the decade and record breaking point holders, under the tutelage of one of the best managers ever, Pep Guardiola, but Mikel himself has no managerial pedigree at the top level, making it very difficult and essentially guesswork to figure out how he’ll do.

Based on the evidence at hand, before Arteta took the job, it would be considered an educated guess to say he’d play ‘expansive football’. This is good because, unlike Unai Emery, it gave the club a clear direction of what style and philosophy the club would take on. However, when you match expansive football with Arsenal’s squad, it doesn’t seem like a good fit – possession football is primarily surrounded by how compact you are without the ball. You have to win the ball back as quickly as possible and if that’s not possible, make sure you’re compact centrally so you’re not vulnerable in defensive transition. Arsenal have unathletic players in defence and midfield making it very difficult to counterpress (win the ball back as quickly as possible) and to recover/stay compact in defensive transitions.

Now of course it’s a long-term project and just because Arteta’s philosophy doesn’t match up well with Arsenal’s current squad, doesn’t mean the appointment was bad or anything like that because the players themselves aren’t good enough in relation to where the club would ideally want to be (challenging for titles) so no matter who was appointed, a clearance was required.

In short, before a ball was kicked under Arteta’s Arsenal tenure, it looked like an elite manager was required to get Arsenal back to the top level playing expansive football. So let’s judge, based on what we’ve seen so far, if he has the potential to be that.

ARSENAL’S SYSTEM UNDER ARTETA SO FAR

When looking at football tactically, you consider fundamental elements of the game – things that are associated with every good team. Things like compactness, athleticism, balance and control. All can be achieved in different ways and through different philosophies. So, as was presumed before a ball was kicked, Arteta’s preference is to keep the ball. He set up Arsenal in an asymmetrical (lopsided) 4-2-3-1 shape with clear patterns of play. 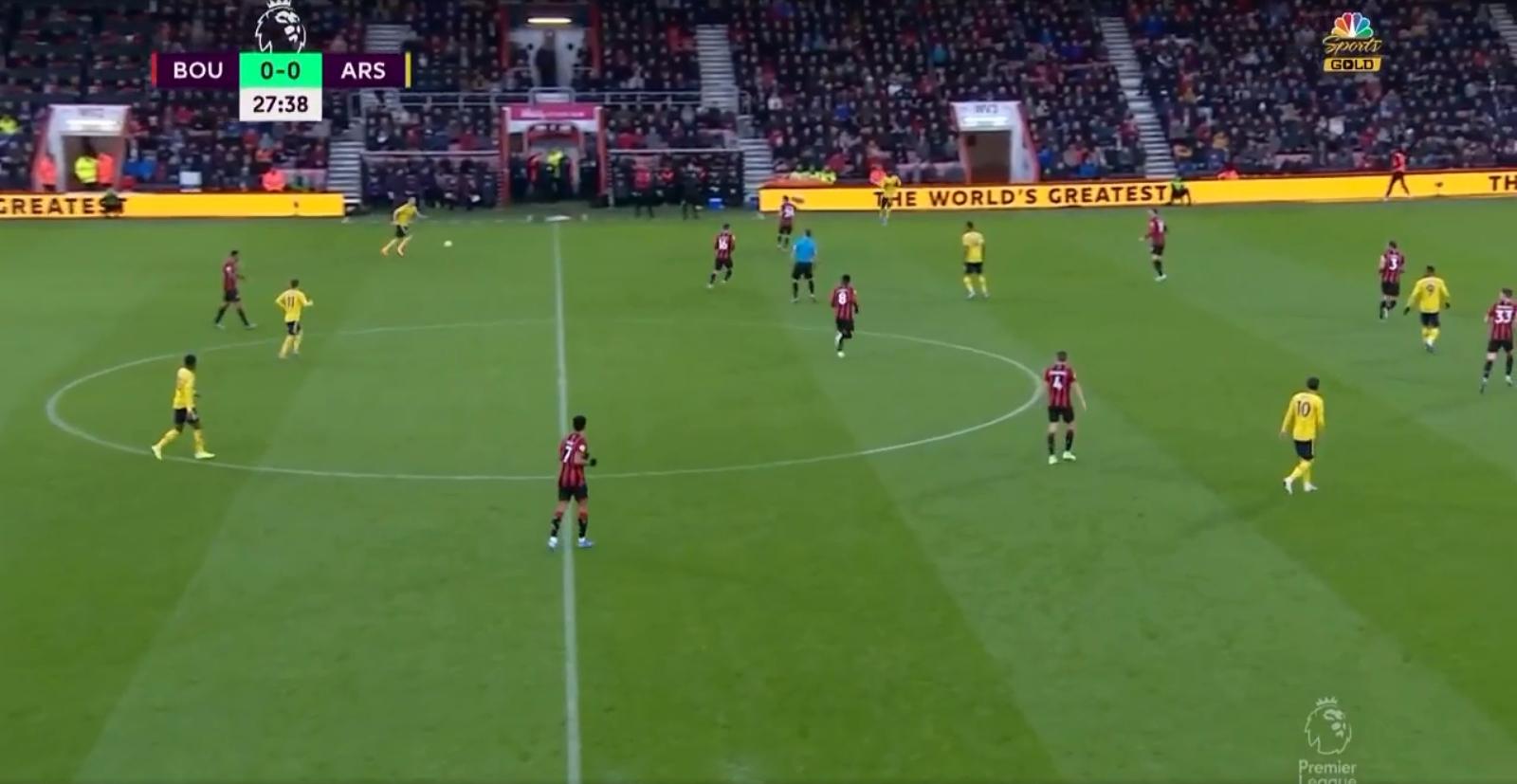 This is the lopsided shape I’m talking about. Here you can see Maitland-Niles inverted, Torreira central, Xhaka in the left half space, Saka high and wide, Aubameyang central, Ozil in the right half space between the lines and Nelson (who’s out of shot) on the right touchline. There is a specific reason for each of these positions.

So now let’s take a further look as to why the shape is lopsided and not your typical 4-2-3-1. Let’s start with the right hand side of the pitch. As we know, Maitland-Niles is in the right half space, Ozil is also in the right half space but between the lines and Nelson is on the right touchline with Torreira sitting behind them all. This creates overloads on the right hand side of the pitch. Almost like a triangle shape and nearly identical to the positions Walker, De Bruyne and Bernardo take up for Manchester City – inverted fullback, a touchline player and a player close to them between the lines. This encourages combination play to let these players find an angle to create chances, as we so often see with Man City when they create space for De Bruyne to cross the ball into the box. 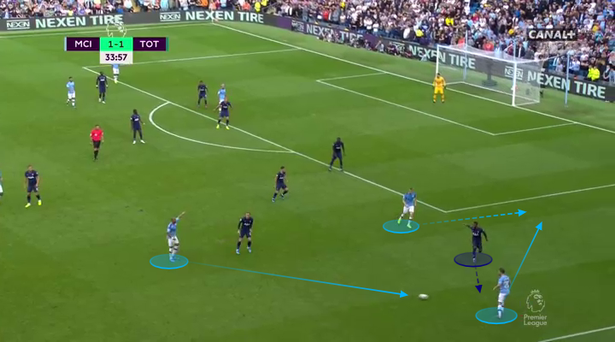 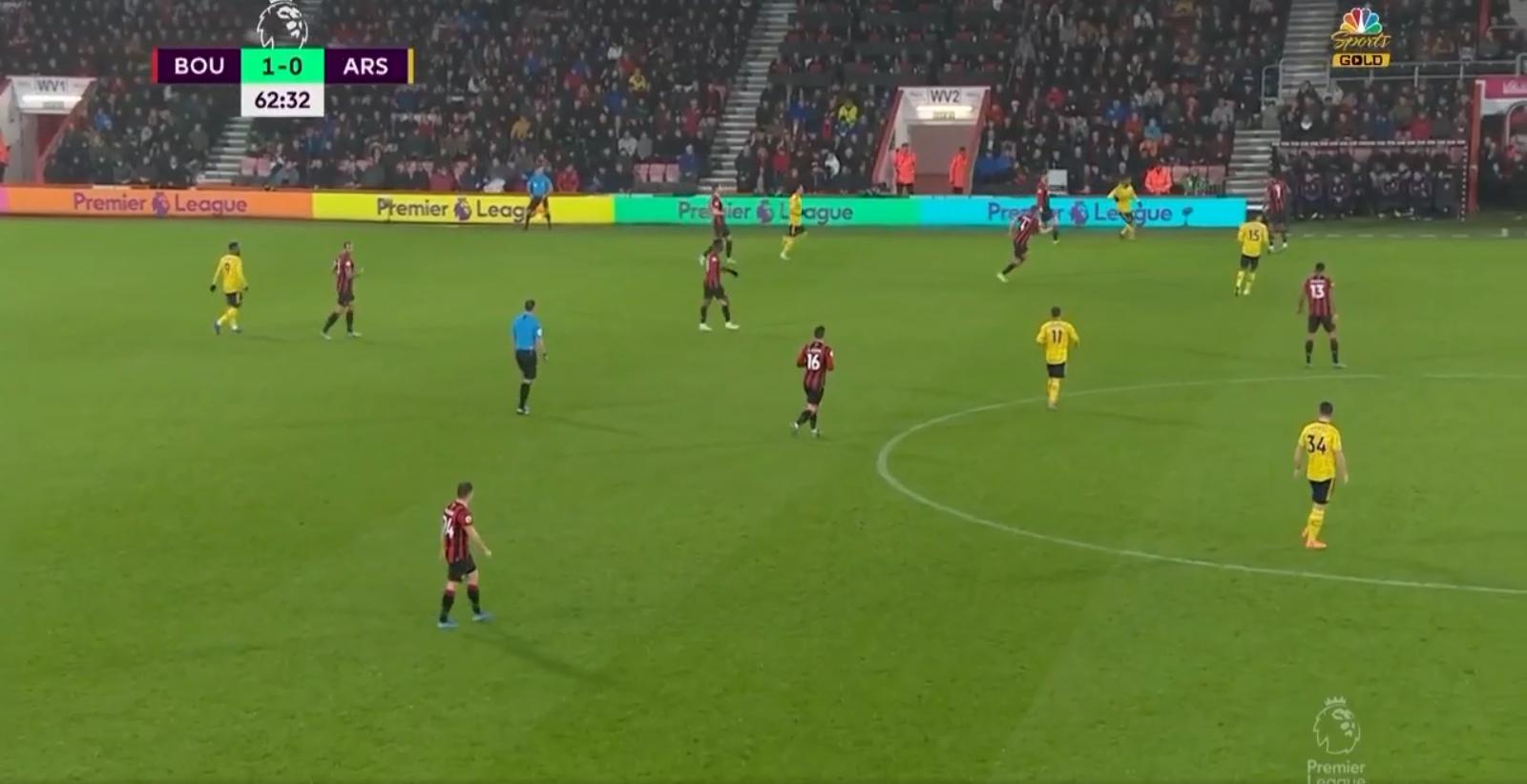 Another positive of this set up is the central compactness it offers with Maitland-Niles and Torreira central, enabling them to clean up transitions or be a recyclable option.

The difference between Arsenal’s set up and City’s set up is City play the same way on both flanks (generally speaking). Arsenal don’t, leaving them with two central defensive midfielders offering compactness (Torreira and Xhaka) as opposed to one with Manchester City (Fernandinho or Rodri). This is a large reason behind City’s current issues is their lack of compactness but that’s besides the point.

So if Arsenal do it differently to City on the left hand side of the pitch, how do they do it?

This is how (in the above image). Instead of a touchline winger, Aubameyang comes infield into his natural striker type role allowing Saka to control the whole flank to himself. Xhaka is in the left half space acting as #1) a recyclable option and #2) a central defensive compactness option. Although the combination play on this side of the pitch isn’t as creative as the opposite side because of the inability to create using overloads, what is used is a switch of play from the right hand side to the inverted Aubameyang or the isolated Saka. Below we see a pass from Nelson to the inverted Aubameyang who subsequently scores.

They’re not hopeless creatively themselves, either, as we saw with Pepe’s goal against Manchester United when Kolasinac and Aubameyang combined to create for the Ivorian. Saka, a natural attacker, can create via dribbling down the left flank and taking players on, as can Aubameyang. They can combine together or recycle and switch play for the opposite side to create using the overloads we talked about previously. Also, Aubameyang is a major threat in transitional play. If Arsenal lose the ball, long passes into the channels or in his direction and he’s likely to retrieve it. He can also create confusion for the opposite fullback when running infield, creating space on the flank for Saka to work with.

So that’s Arteta’s Arsenal with the ball in the attacking phase. Very good, huh? Well structurally yes but personnel wise? Not so much. Lacazette, Ozil, Torreira and Xhaka aren’t physically cut out for the counterpressing or defensive transitional game so Arsenal will ultimately concede in defensive transitions until they improve upon these individuals but from Arteta’s perspective, he couldn’t provide the players a better platform to succeed.

Against Chelsea and Manchester United, Arsenal played really well in the opening exchanges. They built from the back in a natural 4-2-3-1 shape with the central defenders and central midfielders forming a box type build up with the full backs going high and wide. This is a simple and typical 4-2-3-1 pattern of building up with the central midfielders staying central but in their respective half spaces to gain a numerical advantage in the build up phase and ultimately progress play forward. Also, as ever, their central positioning enables immediate compactness if the ball is lost in the second phase. The same offensive dynamics remained from the Bournemouth game.

Arsenal went 1-0 ahead from a corner against Chelsea but lost control of the match with the ball in the second half. However, this doesn’t necessarily mean they lost control of the game itself. They defended in a fantastically drilled 4-4-2 shape keeping the central areas closed off.

Chelsea only began to create chances as the game wore on and the Arsenal players fatigued. Arteta even said himself post-match, the players aren’t fit enough.

The only criticism that can be attributed towards Arteta in this game, is his failure to react to Chelsea’s onslaught of pressure once Arsenal’s 4-4-2 started to drop into a low block. The players were tired and were hanging on as opposed to controlling the space in a medium block previously in the game. He could’ve brought on an outlet like Pepe to relieve the team of pressure, get up the pitch and have a breather but also to maintain an attacking threat. Against Manchester United, Arteta reacted and brought Nelson on for Pepe to replace tired legs with a fresh, athletic outlet

ARSENAL’S INABILITY TO KEEP THE BALL

Arsenal are a possession based team yet spent most of the game without the ball against both Manchester United and Chelsea. They were unable to keep it due to their lack of natural passers in the team. It’s a problem Man City regularly come up against when teams can keep the ball against their initial counterpress. It even happened vs both Chelsea and United in the league. The difference between Man City and Arsenal is Man City have way better technicians all over the park, so they can go toe to toe with teams possession wise. However, Arsenal don’t have that luxury so they dropped deep into their settled shape. For Arteta’s Arsenal to truly take shape identity-wise, they would ideally like a significantly higher percentage of the ball and higher quality technicians will enable that, but to maintain control with the ball, natural passers in midfield are required – something not even Manchester City have.

Arteta’s ability to coach a team in terms of spacing dynamics in the final third whilst adapting to the profile of player at his disposal combined with his ability to maintain compactness along with that AND his ability to coach a top class off the ball shape is unique. For a possession based manager to drill a 4-4-2 shape that well after 2 weeks in charge is really something else.  Something I doubt even a Guardiola could conjure up with Arsenal’s current set of players – a truly remarkable achievement from Arteta.

Mikel Arteta couldn’t have had a better start to life at Arsenal and has all the makings of an elite manager and the manner in which he conducts himself hasn’t even been discussed in this article – a true leader of men with an aura about him. But questions are still to be asked. Will he stick to a specific system and sign suitable players for that system to enable Arsenal to maintain control of games via 1) athleticism, 2) quality and 3) passing? Will he be allowed to do that by Arsenal’s board? Time will tell but Mikel Arteta has ticked every box available to him at Arsenal so far…