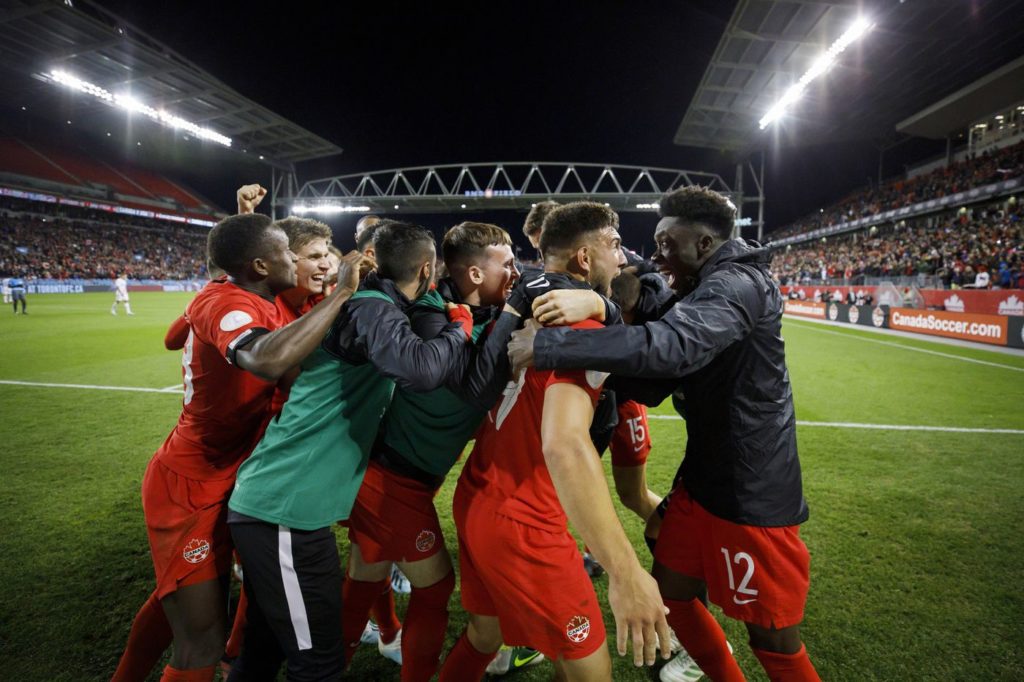 In the lead up to the match John Herdman called for Canadian fans to push his men past the Americans. And they responded. Over 17,000 packed Toronto’s BMO field which made for a packed lower bowl.

The match, slow and methodical, did not produce a plethora of chances on either side.

Canada counted three – albeit episodic – scoring chances in the first half with David missing a one-on-one after being gifted a misplayed ball.

The United States produced little in terms of offence, although they grew as the minutes wore on. Their biggest chance came in the 51st minute with Pulisic stoned by Red Star Belgrade goalkeeper Milan Borjan from point blank range.

Canada, one minute earlier had a great chance thanks to Laryea who squared a ball for David who misses the first post by inches.

The home side would make good on their next, chance however: Arfield serves a cross ball along the ground to the far post for Davies who squares it at Steffen who can’t hold on and allows the ball to cross the line. 1-0 Canada.

The goal is exactly what the match needed, opening up play. The 72nd minute features end-to-end action with Borjan comfortably saving a lone header from 16 yards out Lletget, followed by a one-on-one by Hoilett who’s met by a calm and collected Steffen.

Slowly and methodically, the United States build their game play looking for the equalizer but Canada’s tactical organization at the back pays off with a counter attack: Osorio serves up a lob for Cavallini, who slams it home for Canada’s second goal.

The 17,000 on hand came to see history made before their eyes. Canada showed grit, character and lethal instincts on the night to win their first match against the Americans since 1985, and the first win in an official match against them since 1980.

“This is an amazing feeling and I feel like this is a new Canada. And (I’m) looking forward to the future” ~ Jonathan David, Canada Forward

“This is unbelievable. Unbelievable … We showed that we have a young team who’s going to bring new football to Canada,”  ~ Milan Borjan, Canada Goalkeeper

“There’s been a lot of us in this (Canada Soccer) Association that have been grinding away, waiting for a night like this on the men’s side. But it’s only one step, it’s only one little drop in the ocean I’m hoping for this team. There’s more to come” ~ John Herdman, Canada Coach

“They put a lot into the game,” said Bradley. “They treated it like it was a cup final. They stepped up harder, they reacted quicker to every loose ball. In all the little ways in a game like that, they were on top of things” ~ Michael Bradley, US Midfielder

“I think the first thing that stands out to me was desire, (the) desire of Canada. Give them credit. But having said that, the minimum we expect is to match that. I wasn’t happy with the desire that we displayed tonight to win the soccer game, we lost too many 50-50 balls we lost and that hurt us.” ~ Gregg Berhalter, US Coach