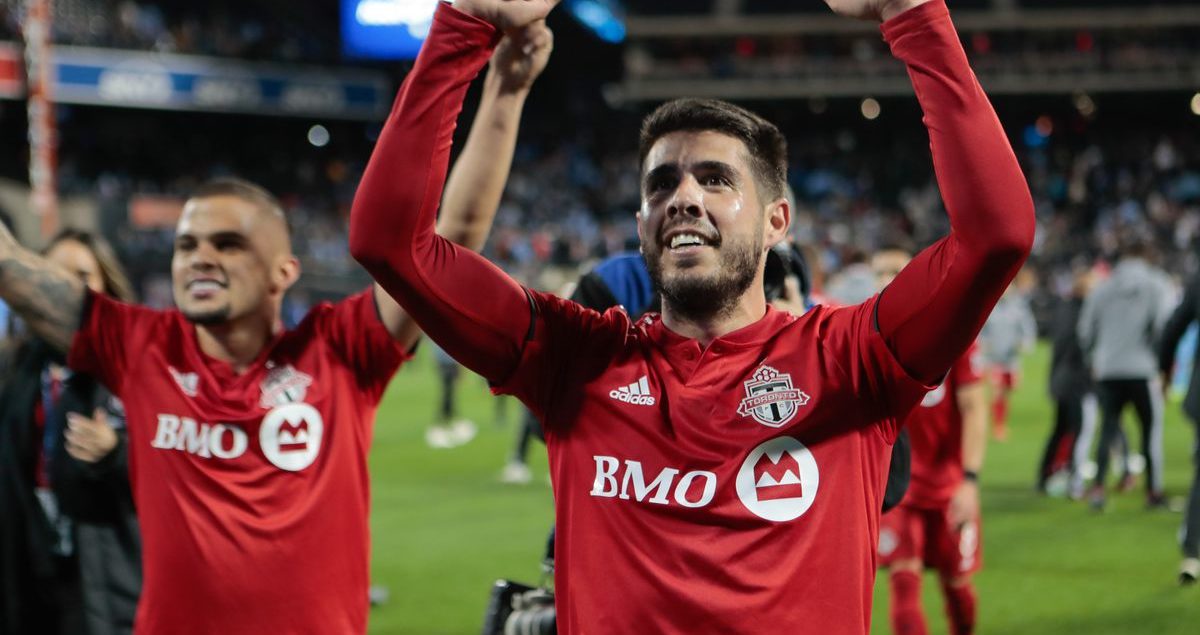 Match Report
With a record of two wins, one draw and two losses in the last five home openers, Toronto FC looked to please a warm crowd on a cool March evening.
The site that christened Alejandro Pozuelo last season, who delighted fans by chipping the Revolution’s goalkeeper twice that game, was pleased once again by a late winner by Ife Achara.
Vanney opted for a 4-4-2 formation with Westberg in goal, Auro and Morrow at fullback, Gonzalez and Mavinga as centrebacks, Achara and Gallardo on the wings, Osorio and Delgado in centre midfield. In attack, and no other option than the big guns Pozuelo and Altidore.
New York City FC lined up with a 4-1-4-1 that saw Johnson in goal, Tinnerholm and Matarrita at fullback, Callens and Sands in centre back, Ring sitting on top of the defence with Mitrita and Medina on the wings, Moralez and Parks in centre mid and Heber up top as the sole forward.
The match got off to a slow start, with VAR (Video Assistant Referee) as the main protagonist in the first half.  In fact, match official Ted Unkel had to consult it twice: in the first instance, at the 11th minute to review a goal scored by the home side’s rookie Ife Achara (the goal was in turn disallowed), and in the second to review a possible foul by the visitors on Morrow.  The first half ends with little else to report other than a Pozuelo cross bar and a weak attempt by Parks.
At the restart the visitors start to push TFC into their own end, but are unable to produce anything worthy of note.  As the half matures, the Reds come out of that shell and start to make a case for a home win. At the 67th minute Pozuelo brushes a free kick into the box that Altidore meets well, but Johnson is equal to the task.  Three minutes later, Sands nearly putts the ball into his own goal, in an attempt to clear a dangerous, low cross by Pozuelo.
At the 80th minute, substitute Ritchie Laryea gathers a ball that Altidore can’t quite control, puts up a cross that Caliens deflects up, but can’t quite clear, and rookie Achara slams home a header that delights the home crowd on his debut. 1-0 Toronto FC.
Little to no reaction from a static NYC FC side who struggled to produce anything in terms of dangerous offence.  Credit goes to Vanney for setting a solid defensive phase by his men who did really well considering that they lacked a muscular midfield.
The Reds run out deserved winners at the end, giving Greg Vanney his 100th career win as a head coach.
Notable Quotes
“I heard it was a great hockey player. I forget his name, but he’s a great hockey player.”  – Man of the Match Achara on the significance of wearing number 99, forgetting that it was Wayne Gretzky.
“My 100th career win? A lot of the guys were here for the first one and they’re here still” – Greg Vanney, TFC head coach
Game Summary
Toronto 1, New York 0
Goal: Ife Achara (80th minute)
Attendance: 26,171
By: Rocco Fasano
Share:
TwitterFacebookEmailLinkedIn