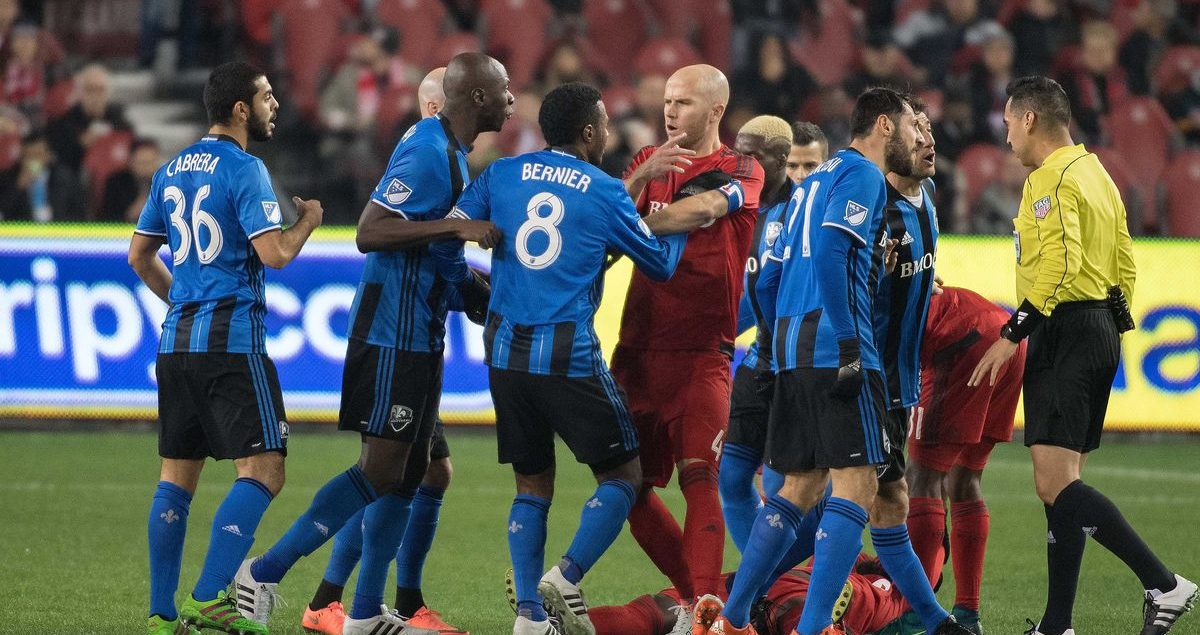 Montreal made their return to BMO Field a month after a 2-1 defeat in league play. This time they were looking for blood. And silverware.

Vanney’s men on the other hand had the tall order of reversing a 1-0 aggregate that matured a week prior in Montreal’s Saputo Stadium.

The game got off to a slow start, with Toronto trying to break down Montreal’s tight lines. The Impact – thanks to some painstaking work by their newly minted coach Wilmer Cabrera – held the line well, conceding little in terms of chances to the home side.

Onlookers got the sense that Altidore – most often the Reds’ best sniper – was not on his night after two significant misses in the first half: the first at the 15’ after settling a cross by Endoh (the best among the Reds), and the second right before halftime as his shot passed just shy of (Montreal goalkeeper) Diop.

Montreal, played a typical grind-down game followed by counterattacks. In several occasions this tactic worked to create dangerous chances, like Piatti’s 26th minute curler and Urruti’s shot at the 56th minute – all batted away or parried well by TFC’s goalkeeper Alex Bono.

Toronto FC will rue their chances, however. Pozuelo’s 50th minute post, and Delgado’s huge chance right after Endoh’s series tying goal in the 69th minute. In occasion of the goal, the Canadian-Japanese player picked up a ball that Osorio bobbled up in the small box and pounded it home.

At the 83rd minute match official Drew Fischer sends Mavinga packing home after a “last man” foul on Bojan, who was headed alone on goal. Toronto pushed, albeit not with the same verve, to make it 2-0 to no avail.

With the aggregate score 1-1 in the two-legged series, Canadian Championship rules dictate that the tie be decided with penalties – no extra time.

Montreal’s penalties were all on point, with Bojan, Lovitz and Camacho scoring; while Toronto FC’s four penalties were struck with purpose but missed the mark. Pozuelo was the only shooter to convert; while Altidore, Mullins and Osorio missed theirs.

“This one stings, but that’s football. We’re in a good way in MLS play. I like our chances going into the playoffs.” – Jonathan Osorio, TFC Midfielder

“It’s disappointing, but there’s more there for this group. Our focus is fully on the league now.” – Alex Bono, TFC Goalkeeper

“By and large, we gave a great effort on the night. We created a lot of opportunities, we just didn’t finish them off.” – Greg Vanney, TFC Head Coach