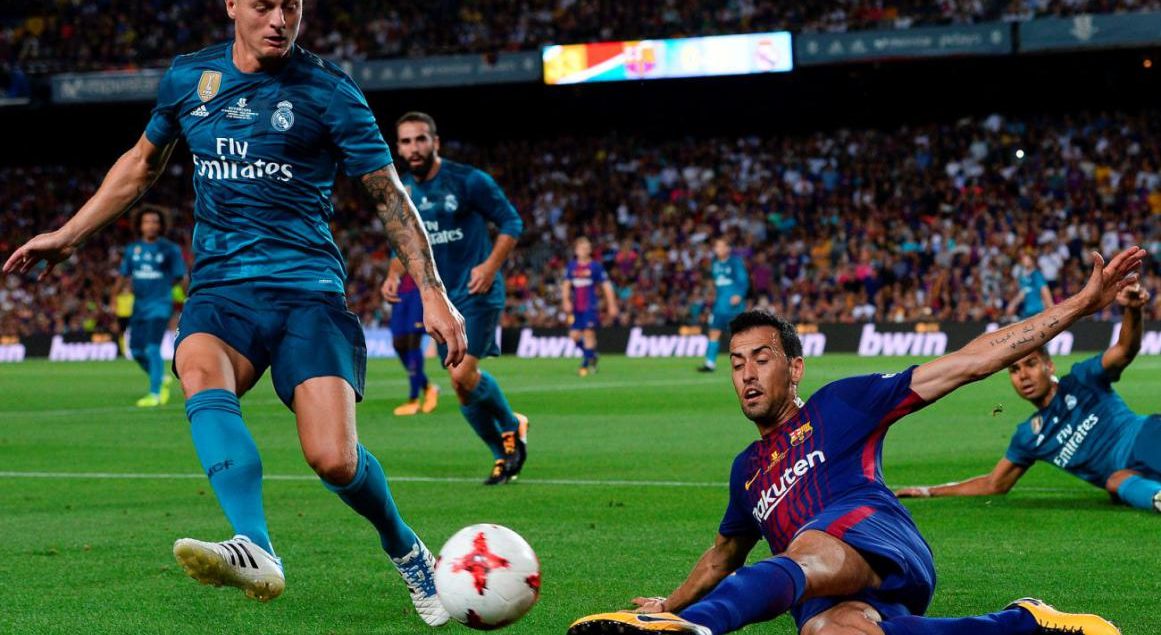 “Football is played with the head, your feet are just your tools.” – Andrea Pirlo.

Andrea Pirlo’s quotes are something of a phenomenon with football fans. From him talking about playing PlayStation before a World Cup final, to this. A quote that was tailor-made for just a few legends of the game. Already, a few names might be popping into your head, Phillip Lahm being quite possibly the most common one. However, there is one that along with Lahm brings this quote to life, and his name is Sergio Busquets Burgos. Undoubtedly, one of the most tactically astute and
diligent players the beautiful game has ever seen.

“You watch the game, you don’t see Busquets. You watch Busquets, you see the whole game.” -Vincente Del Bosque.

This quote describes Busquets in the best possible way. He’s a player that is the definition of ‘simplicity’ and he just makes everything he does look so effortless, when in fact it’s the complete opposite. People often refer to Messi as the most crucial player in the Barcelona side, and that is correct in it’s own right. However, Sergio Busquets is a close second in importance, for me creeping into first. He is undoubtedly the nucleus of the Barçelona side and has been so for many years now. His importance is often undermined by many, this is because he doesn’t really catch the eye when playing unlike players like Messi. He’s never had flair or skills in abundance and this is why many people don’t realize how significant he is. The people that value him however, know how essential he truly is, making the team tick.

I could easily bore with you stats, analytics, pass maps, etc. However, I feel as if trying to prove his worth via stats would not do such an amazing player justice. The fact is that El Pulpo is a player who doesn’t look that impressive if you base him solely on stats when in fact it’s different. To take in the beauty of Sergio Busquets playing, you have to watch him in the game, closely. As a lion watches its prey, only then can one realize about how much he does for the team. The term ‘workhorse’ has never been associated with Busquets. Players like Kante are said to be all over the pitch because of how much they run throughout the game. However, Busquets is everywhere throughout the game as well, despite him not running all over the place. Many questions are raised as to how it’s possible for him to seemingly stay in the same place all game but be everywhere at the same time, and this is
where his intelligence plays a huge role. Busquets is a player who always seems to be one step ahead of the game. Before something has happened, he already knows about it and is there to stop it. He is truly the epitome of a player having footballing intelligence.

Now, we must move back in time to see how Busquets developed into the player he is. Born in Sabadell, Barcelona, Busquets started playing football at local club CD Badia del Vallès, followed by spells at a number of different teams before joining Barça’s youth ranks in 2005. At this time Busquets was somewhat of a different player. Much more attacking and that showed in his time in the Juvenil A team where he scored 7 goals in 26 games in the second season. After this impressive spell, he was promoted to the B team which was currently being managed by none other than Pep Guardiola. From this, it is clear that the relationship between the two goes way back. Busquets helped Pep achieve promotion to the third division and in that same season made his debut for Barcelona, coming on as a substitute in the Copa Catalunya. In May 2008, Pep Guardiola was announced as the manager for Barcelona, and it is no surprise that Busquets made his full debut for Barcelona under him. Since their time together in the Barça B side, it was clear that Pep was in awe of Busquets and his decision to put him as the defensive midfielder of the first team paid off massively.

His faith in Busquets was stupendous and many were in doubt as to whether Busquets really could control the game for a team like Barcelona. In the 2008/09 season, he silenced those doubters and it was a special season for Barcelona as they became the first ever Spanish side to win the treble. Sergio Busquets’ contribution towards this season was overshadowed by the likes of Lionel Messi. However, Busquets was indeed the player that made them tick all throughout the season. His calmness and composure in midfield was one of the main factors as to Pep’s “Tiki taka” philosophy being so successful and everyone in the footballing world was in awe of the football they played, trying to emulate the remarkable “Tiki taka” play style. Many tried to emulate it, however no one could completely. Most did not have the players of Barcelona’s quality but even if some teams did,
they did not have one vital aspect of that play style, and that was El Pulpo. The nickname meaning “The octopus” fits Busquets perfectly; whenever he plays, he has complete control of the game, like an octopus would have control over it’s prey with the help of its eight arms.

In 2011, César Luis Menotti said the following about Busquets and it just shows how special Busquets is seen by many.
“He is one of the greatest talents that has been given to Spanish football. This is a discovery. The first time I saw Busquets playing, I called a friend and said: I saw a player from an extinct species. He’s a star.”

Pep’s trust in Busquets continued for seasons to come, next season he was preferred to Yaya Touré as the holding midfielder for Barcelona, and later on forced Mascherano to move to CB as he had solidified his position in that illustrious midfield. His intelligence and ability in turn helped Xavi and Iniesta to play as well. We often see them being praised for the accolades Barcelona achieved, but never Busquets which is an injustice like no other. The team Busquets played in was special, but the person that made it special was El Pulpo. He won accolade after accolade with Barcelona. He has currently won a lot, and even that could be seen as an understatement. He’s won everything a player dreams of winning, even with the International side. World Cup, Champions League, you name it, Busquets will have won it.

Sergio Busquets is still going strong, controlling that midfield like he initially did in that 2008/09 season. The people that have, should be forever grateful to have had the privilege of watching an exceptional player like Busquets, especially in his prime. Currently, El Pulpo is 29 years old and there is no sugar-coating it but he will soon be coming towards the end of his illustrious career. There’s not much we can do about it, except enjoy the years we have left of watching such a special player, as there is no
guarantee if a player like him will come into the beautiful game again. It’s only right for me to end this article on another quote about Busquets but this time it was said by the late, great, Johan Cruyff and that is as good an accolade one can get.
​

“Positionally, he seems like a veteran with or without the ball. With the ball he makes what is difficult look easy: he disposes the ball with one or two touches. Without the ball, he gives us a lesson: that of being in the right place to intercept and running just to recover the ball.”