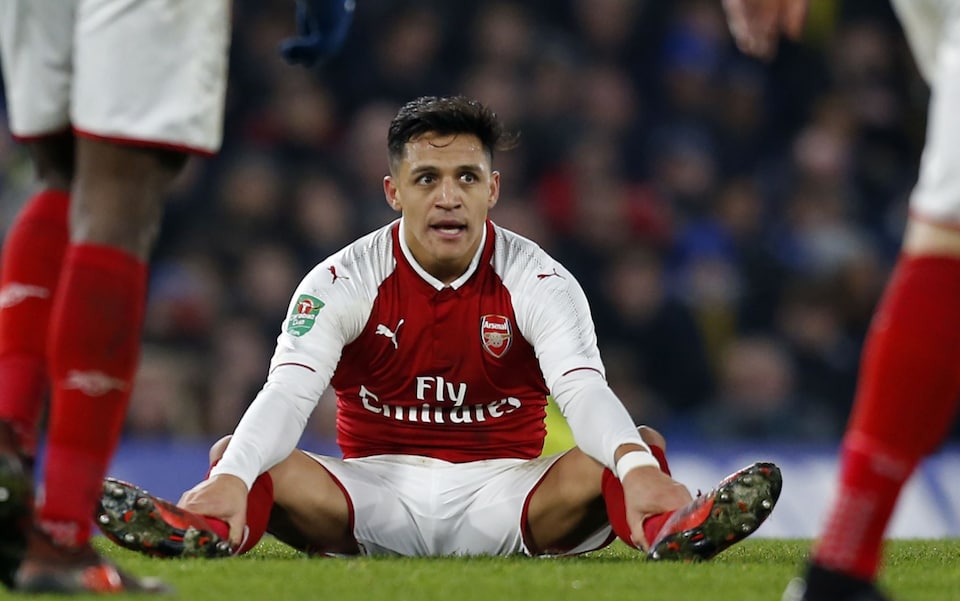 One of January’s biggest transfer stories whittles down to pure preference: would you rather bring a Pogba pass out of the sky, beat your man with a stepover, curl a sumptuous strike into the top right corner, and hear the roar of Stretford End, or would you rather link-up a string of passes with David Silva and finish off an unselfish cutback from Sterling, and celebrate with the Etihad faithful? In fact, you might prefer to sync up with Eden Hazard and swing crosses onto a platter for Alvaro Morata. Not much is certain, but one can imagine Alexis Sánchez is prepared to ditch Olivier Giroud and Danny Welbeck for the red or blue in Manchester.
The 29-year-old Chilean has had his fair share of success throughout his career. From scoring a delectable chip in a 2013 El Clásico, to winning 2 Copa Américas, the diminutive magician brings flair and explosiveness to any pitch he steps foot on. Nevertheless, the polarizing Gunner has European elites knocking on the door, and not featuring in Arsenal’s 2-1 loss to Bournemouth all but confirms the speculation – Wenger and Sánchez will part midway through the season.

There seems to be two factions of Arsenal faithful combating the Sánchez War. There are those who have an appreciation for the aesthetic, the beautiful, the jaw-dropping. Then there are those who see a lack of commitment, a high dispossession stat, a frustrating gem that has remained unpolished. The former treasure the Chilean’s ability to make the difference, his technical aptitude, and his God-given talent – one might consider them football purists; the latter choose to see a wizard past his prime, condemning his frequent dispossessions, his failed through balls, and missed opportunities. With Sánchez, it’s a matter of preference.

Sánchez has graced the Premier League with his presence for 3-plus seasons. Having experienced great productivity since joining the Gunners, the Chilean has struggled to carry the team to league success. 2nd is the closest he’s been to claiming the Premier League crown, and even then Arsenal trailed Cinderella-story Leicester by double digits. As he nears his 30’s, Sánchez’s best shot at the league is via a transfer.

Pep Guardiola and the blues of Manchester offer Sánchez the picturesque scenario for a January transfer: after 23 games, Pep’s team lead the pack by a dozen points, wielding an astonishing record of 20 wins, 2 draws, and 1 loss. Their 67 goals for is a testament to their scintillating attacking force, which would become even deadlier with the addition of the Chilean.

Sánchez’s defensive intensity would be a key element of his game under Pep, who prefers attackers who press from the front, recuperate possession, and recycle the ball. Their early relationship at Barcelona, where Pep brought Sánchez under his tutelage, could be key in securing a deal. A reconvening could come to fruition, one that reunites teacher and student.

The relationship that would transpire from such a transfer would follow the biological rules of mutualism: an association between organisms of two different species in which each benefits. Sánchez would benefit from a nearly-guaranteed piece of silverware; Pep would benefit by adding another world-class attacker to his arsenal, one with the defensive intensity he so craves.

Yet this love story is not meant to be. On January 15th, it was announced that Manchester City had ended their pursuit of Alexis Sánchez. Whether money was an issue, or if Pep believed Sánchez’s desire to play for City had deteriorated since the summer, the reunion with the Chilean and his former boss will have to wait a few more years.
Coincidentally, at the same time, a dark horse emerged in the Sánchez transfer saga, the Blues. Although manager Antonio Conte has denied rumors of Chelsea pursuing a bid for the 29-year-old, speculation lingers in London.

Monumental wouldn’t suffice. Astonishing wouldn’t do it justice. If Chelsea manage to swoop in and steal Alexis Sánchez from right under United’s noses, it would throw the league into chaos. The balance of power would tilt, sending Arsenal sliding into lower echelons, and elevating Chelsea to the highest tier.

Eden Hazard and Alexis Sánchez joining forces? A match of heavenly proportions for dribbling aficionados ‘round the world. Simply put, Chelsea would increase their offensive potency by several notches. Amidst the great drought of scoring, Sánchez could prove to be a worthy oasis.
Conte has made it clear that he is a Sánchez admirer, but there appears to be more obstacles along Chelsea’s path. It’s quite unlikely he’ll join the Blues, but you can never rule out Roman Abramovich and the universal language he speaks: money.

Sánchez’s most likely destination at the moment is Old Trafford. United’s defender Phil Jones recently commented on the matter: “He (Sánchez) is a good player. We’ll have to see.” Nevertheless, the Chilean’s move may hinge on the opinion of one notable Armenian…

Recent talks have emerged that Henrikh Mkhitaryan will be included in a straight-swap deal for Sánchez. The Armenian, who arrived at United from Dortmund in 2016, has fallen out of favor with Mourinho over the past few months, witnessing little to no playing time, and not looking his usual, creative self when he gets the nod. His future at United seems hazy at best, and the Gunners may have called at the right time.

United have a youthful, energetic attacking core, featuring the likes of Lukaku, Martial, and Rashford. Nevertheless, the offensive consistency has come into question several times, with United sometimes struggling to create in the final third. The addition of Alexis to Mourinho’s side would bolster their attacking credibility, augment their consistency, and see United one-up their crosstown rivals at least once this season.

Although associated costs are high, United are getting a player they have pursued at length, whilst also stealing a City target. Nevertheless, discerning observers may have reason to be wary – South American stars have previously struggled. Take a look at Radamel Falcao, or Ángel Di María, whose recent spells for the Red Devils marked the lowest lows of their entire careers; however, they were Premier League newbies, and Sánchez has consistently proved that his spontaneity, ingenuity, and dynamism precede success in this league.

One of Pep Guardiola’s regrets about his tenure at Barcelona was his failure to find a definitive spot for Alexis Sánchez to fill. Old Trafford and Mourinho present the perfect antidote, where Sánchez can dazzle and form a formidable duo with Paul Pogba.
Reports that Arsenal are preparing an offer for Dortmund striker Pierre-Emerick Aubameyang should inspire a feeling of ambiguity amongst United supporters. On the negative, their rivals are showing desire in the transfer market by tracking a top striker; on the positive, this attempt at bolstering their attack should serve as a bright beacon that the Chilean is coming.