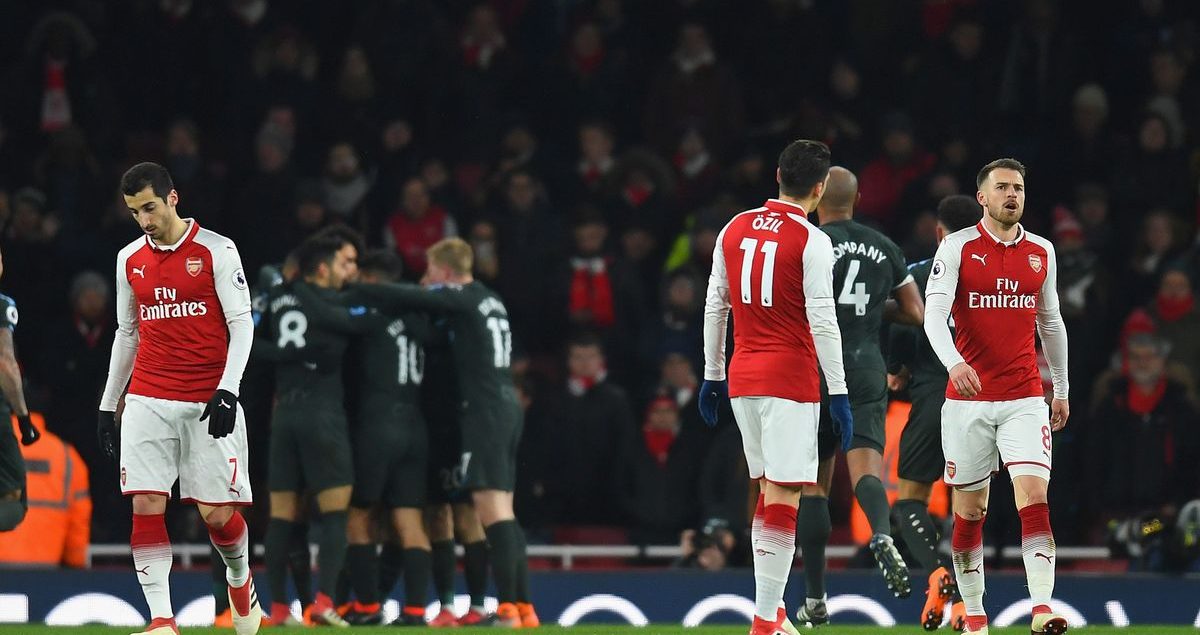 Spineless. Gutless. Pathetic. Abysmal. Disgraceful. These words have been used over the past few weeks to accurately paint an overall picture of Arsenal’s form. A 1-0 loss in the North London Derby to Tottenham, a game in which Arsenal were fortunate to not lose 3-0, or 4-0, a 2-1 loss at home to Östersund, a Swedish side that didn’t even exist 25 years ago. Then finally two consecutive 3-0 losses to Manchester City, both matches where Pep Guardiola’s side didn’t even have to be at its best in order to cruise past Arsenal. On Sunday in the Carabao Cup final, Arsène Wenger’s men looked dire, hapless, and had given up after about 30 minutes of football. After a comical mistake from Shkodran Mustafi, which allowed Sergio Agüero to easily give Manchester City a 1-0 advantage, a few Arsenal players appealed to the match official for a foul (it was definitely not a foul), which is sad really, and tells you all you need to know about the club currently. Arsenal has an accountability problem, and most of it stems from the manager, Arsène Wenger.

After a shocking display in a cup final, in front of thousands of fans at Wembley Stadium, many rightfully wondered if some of the Arsenal players even cared. Aaron Ramsey, Granit Xhaka, all walking around aimlessly, looking downtrodden as Manchester City put the game beyond reach. Mesut Özil looking invisible, and letting a goalkeeper Claudio Bravo, complete more key passes. Hector Bellerín offering very little going forward, and looking shaky defending against Leroy Sané, Petr Čech not making the saves he used to, and Shkodran Mustafi again defending like a schoolboy in the worst moments. The problem is after shocking displays like that, and the match on Thursday, is Arsène Wenger will still come out and back his players, or make some generalized excuse. On Thursday in a half empty Emirates, Arsenal found themselves losing 3-0, just after 30 minutes.  After the match, Arsène Wenger said he felt like his team looked strong, and perhaps lost because they were low on confidence after losing the Carabao Cup final. If being down 3-0 at home is a “strong” performance, then it really is time for Arsène Wenger to leave. Whose job is it to give the players a confidence boost? Whose job is it to ensure the players know their tactical instructions and are well-drilled on how to perform?

This squad that is low on confidence and currently in poor form, is a squad that Arsène Wenger built. Shkodran Mustafi is a World Cup winner, and was one of La Liga’s best defenders at Valencia. Sead Kolašinac was a solid defender at Schalke, even making it in the Bundelisga Team of the Year. Granit Xhaka captained his BMG side to the Champions League just at the age of 23. Alexandre Lacazette, one of the most prolific forwards in Europe, scored 100 goals in 203 appearances with Lyon. These are all good players on paper, and certainly players who performed well for their previous clubs, but under Arsène Wenger, they’ve all noticeably regressed. You cannot make a case for any of these players and say they’ve improved under Wenger. You could, however, say that these players have all looked worse under Wenger. Arsène Wenger really doesn’t give detailed tactical instructions, and if he does, it’s obvious the players don’t care enough to listen or pay attention. Arsène Wenger is no longer capable of crafting a tactical system that amplifies the strengths of his best players, and minimizes and covers over their flaws. Instead, under Arsène Wenger, his best players’ talents are often minimized and their flaws are exposed almost on a minute by minute basis.

There used to be a time where Arsenal played beautiful, attractive, forward thinking football. Now the football they play is boring, dull, and uninspired. Now, Arsenal already have thirteen losses this season, and are on pace to finish with just 61 points, their worst finish since the 1994-1995 League campaign. Arsène Wenger built Arsenal into a powerhouse, and into one of the best teams in England and Europe. On his day, and for many years, few teams could say they were better than Arsenal, and even fewer could say they played better looking football. However now, under Arsène Wenger, Arsenal are the laughingstock of Modern European Football and that will not change until Arsène Wenger leaves.