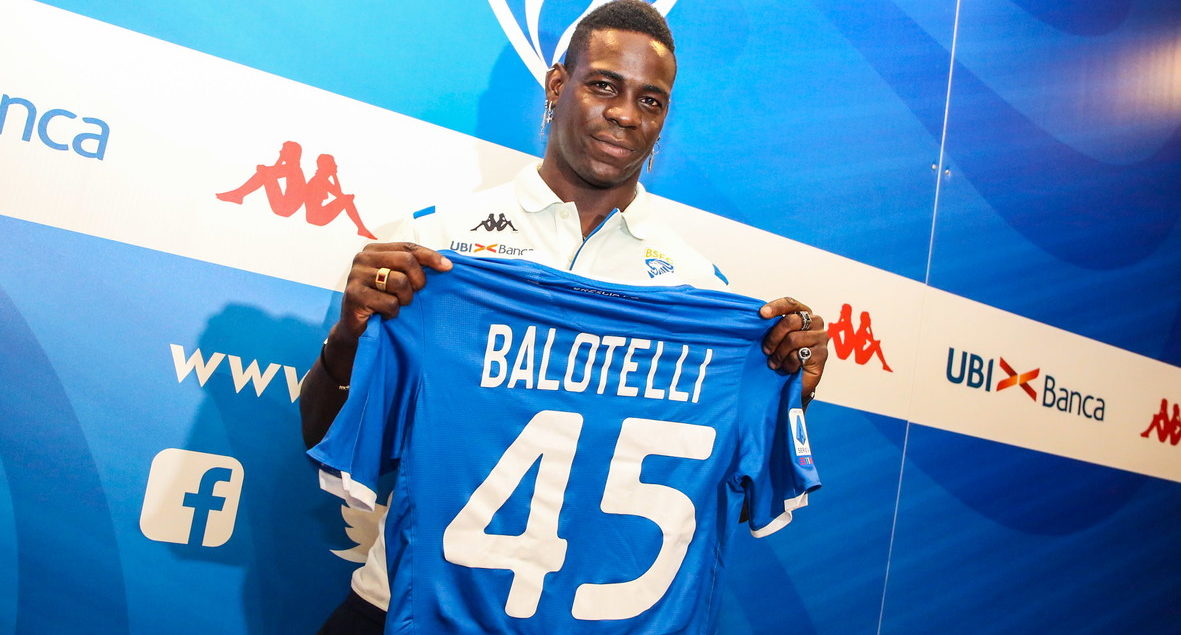 “Brescia is my hometown, I cannot compare it to any other club in the world.” This was just one of the soundbites from Mario Balotelli’s press conference on Monday the 19th August, as the 29-year old made his return to Italian football.
There was such a buzz of anticipation in the Lombardian city that the unveiling was held up for the best part of an hour! Love him or hate him, “Super Mario” brings excitement wherever he goes.
It is a return to the city where the Italy international grew up, as despite being born in Palermo, Sicily, he and his family moved to the city when he was just two years old. He really does feel a sense of belonging to the city and there has been for some time now, a matter of when, not if, he would one day wear the colours of La Leonessa.
Brescia off-course, have just made their return to Serie A for the first time since 2011. Last season in Serie B, they started off slowly, but started making their accentuation up the table after the appointment of manager Eugenio Corini. The 49-year old instilled a sense of calm on a talented, but under-performing side, they started growing as the season went on and were able to fully express their potential and played some thrilling and entertaining football to top the standings at the end of the 36 game campaign.
Now that Balotelli has joined, he will be looking to help, not only stabilise the club in the top flight, but also, be that “X factor” that can turn matches on it’s head, as he has done before, albeit not as frequently as he can. This however, will probably be his last chance in a top flight league, as having previously represented Inter, Manchester City, Milan, Liverpool, Nice & Marseille and not fulfilling his undoubted talent, the man, and yes he is a MAN now, who celebrated his birthday earlier this month must now not waste this opportunity.
His most recent destinations in Ligue 1 at Nice & Marseille yielded 51 goals in 88 games, an impressive tally, but unfortunately, despite seemingly looking like he found a home, he fell out with a few people.
Someone who may just throw an eye on his progress will be Italy manager Roberto Mancini. Interestingly, the Azzurri boss spoke to the media mere hours before the official announcement of Balotelli’s move to Brescia.
In an interview with Gazzetta dello Sport, “Mancio” said “At 29, and for the second year in a row , less than 10 days before the start of the season, he still didn’t have the absolute certainty of a team.” The 54-year old who has always been a “father figure” to the controversial character and managed him at Inter & Manchester City and a brief period with the national team, further went onto to express his disappointment. “He didn’t prepare, he didn’t train regularly. He must reflect, it’s not normal.”
That last word “normal” is telling, because “Super Mario” as he is known, is many things, but normal is definitely not one of them, and that is not an insult for the record. Mancini stated further that he loves the player, but can’t do anything more for him at this time and he hoped that playing closer to home, will make him more “comfortable.”
Balotelli was reportedly close to a move to Brazil, to suit up for giants Flamengo, so he almost choose not to “play close to home.” Making comparisons is difficult in the best of times, but after this acquisition, Brescia fans may just be casting their mind back to the 90’s & early 2000’s, when players such as Gheorghe Hagi, Roberto Baggio & Pep Guardiola strutted their stuff at the Stadio Mario Rigamonti.
What may manager Corini be thinking at this point in time? One would think he would have been consulted on the arrival of the 36 capped international. The question is now, how will the man who himself spent a portion of his own playing carear with the club, integrate Balotelli in his plans.
Make no mistake about it, while all the euphoria and emotion of the signing will grab the headlines, there is a team that needs to perform and after being away from the Serie A for so long, the team & it’s supporters will not want to just be “also rans.”
The season did not get off to the best starts for the club, as they were knocked out of the Coppa Italia by Perugia on Sunday, coincidentally enough while “Balo’s” arrival was announced.
The idea of a strike-force of Alfredo Donnarumaa(no relation to Gigio) and Balotelli, with regista Sandro Tonali making slide rule passes to them, wets the appetite for both Brescia and non-Brescia fans alike.
On his Instagram account Balotelli posted “Finally I’m coming home to MY CITY. Brescia, I’m here. #Homecoming” immediately following the official news.
The player will be hoping that charity begins at home, and he can give Calcio positive performances, goals & who knows, we may yet see him adding to his 14 goals for the Azzurri.
Balotelli said he has been a leader from “Nice onwards,” let us see if he can lead this young group at Brescia to dream of bigger things, and fulfill his & his family’s hopes.
By: Vijay Rahaman
Photo: La Presse
Share:
TwitterFacebookEmailLinkedIn