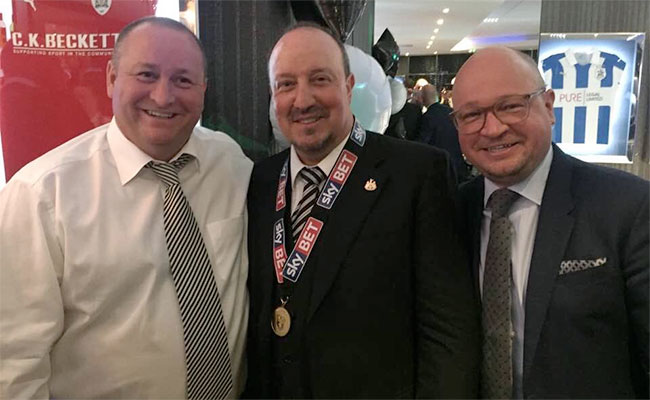 According to Guardian’s reporter Louise Taylor, Rafa Benítez is open to job offers after losing all trust in Newcastle owner Mike Ashley.

At first glance, there is no more a long-term project over there and this seemed enough to convince former Napoli and Real Madrid manager to consider potential, alternative offers Benitez could receive by other Premier League clubs.

Obviously, Benítez was not impressed at all by Ashley’s recruitment campaign despite the fact that Newcastle’s owner pledges.

Benítez’s requests was directed to bolster the Magpies with a true scoring forward, a winger, a left-back and a goalkeeper. He was not satisfied.

Benítez is frustrated and no one could be surprised should he depart from St. James’ Park.

Instead, Ashley failed to sign the needed players on deadline day, leaving an unsatisfied manager who no more believes Newcastle can please his ambitions under Ashley’s regime.

Surely, Newcastle spent around £36m to sign six players but they didn’t embrace Benítez’s requests about the roles he needed and they were not the manager’s first choices.

The mood is stormy over there. The Benítez – Ashley relationship was bizarre at least as the owner has not spoken to his current manager since they met each other last May. And, even according to Louise Taylor, they also don’t talk via telephone.

Benítez knew he never would be given the freedom to run the recruitment campaign, but didn’t image Ashley would spend so little on player market.

With this broken relationship with the owner, is not sure that the 57-year-old manager will remain on Merseyside, despite his loyalty to fans and players.

Benítez wants things to work out and this is the reason why he stayed there in the Championship although he “wanted to be in the Premier League”. By the way, the situation at Tyneside is dysfunctional with Rafa that have to agree every move with both Newcastle’s chief executive Lee Charnley and Sports Direct’s lawyer Justin Barnes. This complicated the transfer market slowing any procedure as it happened when Newcastle failed to secure the loan of Chelsea forward Tammy Abraham.

The issue is that Ashley remained burned by the acquisition of Michael Owen from Real Madrid in 2005.

The failure of Owen to live up to the £17m fee they spent to bring former Liverpool’s forward to St. James Park reinforced Ashley’s convincement to not spend too much on single players. Probably, club’s ownership thought the players Benítez identified was not worthy of the fee their club was asking for. So, Newcastle missed out some summer targets.

Benítez has a whole city behind him but he seems to have lost faith on Ashley’s will to improve the club and replicate the past success so resignation is no more out of question.