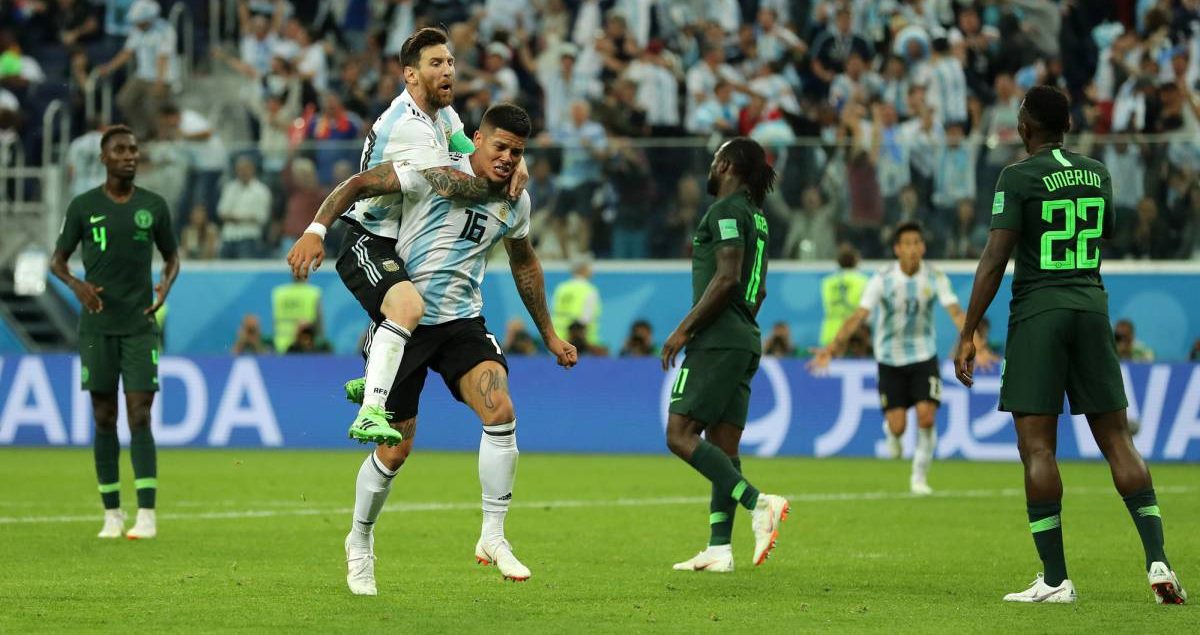 In the aftermath of Nigeria’s 2-0 victory over Iceland, which followed Argentina 3-0 defeat against Croatia, the worldwide media was agog with tales of how Nigeria had paved the way for Messi’s Argentina to qualify. In fact, it started before the game was even played. In many ways, it was massively disrespectful to a Nigerian team that (had the chance to and eventually) jumped to 2nd in the group, with the 2nd best goal difference in the group at the time. The assumption that the Nigerian team was satisfied with just making up the numbers and exiting the tournament in the first round without a fight was what made it disrespectful. It was almost as if Argentina were in the best position to qualify, of the three teams behind Croatia in the group, rather than Nigeria. Nigeria needed a draw, Iceland needed a win to qualify (while overturning their -2 goal difference and matching Argentina’s result if it ended in a win), Argentina needed a win (while overturning their -3 goal difference and bettering Iceland’s result if they won). Despite the fact that Nigeria had the least complicated route to the knockout round, the team was written off and Argentina were expected to get through fairly easily. It set the stage for a tense, interesting final game.

If there is anything the Super Eagles enjoy, it’s being written off. Even their whole country wrote them off just before they won the AFCON in 2013, with the government reportedly getting the team return tickets for flights scheduled just after their quarter final game. That team soared past Cote d’Ivoire, ending up not needing the return tickets, then went all the way to the final and won it. Current captain, John Mikel Obi, was a key part of that team, as were Ahmed Musa, who bagged a brace against Iceland to put Nigeria in prime position for qualification, centre back Kenneth Omeruo, and squad member Ogenyi Onazi. They had firsthand experience about being written off, and were determined to not let this one slide, just like in 2013. Reports emerged after the game was done, that the father of captain Mikel Obi had been kidnapped back in Nigeria, just hours before the game. He was warned to keep his mouth shut by the kidnappers who had called to inform him. As a result, he kept the information to himself, and proceeded to play the game with that in mind.

On the Argentine side, there was turmoil. The players were perplexed by Jorge Sampaoli’s decisions, and the talk was that there had been a mutiny in the team camp. It was widely reported that the players had taken control, and they were going to handle everything, from team selection down to tactics. Although this was publicly denied, it was hard not to believe those reports considering how the players had conducted themselves up until that point. Sergio Agüero’s outburst to reporters when asked about Sampaoli just after the Croatia game was the clearest indication that something was not quite right in the Argentine camp. This made it even more baffling that so many media outlets worldwide, as well as fans, expected Argentina to coast to the next round.

Argentina lined up in a 4-4-2, with a front 2 of Messi and Agüero. Enzo Pérez and Ángel Di María were out wide while Éver Banega and Javier Mascherano were in charge of the midfield. Nigeria went with the 3-5-2 that had worked so well against Iceland, with an unchanged line-up. Musa and Kelechi Iheanacho were paired up front, with Victor Moses as a right wing back and Brian Idowu as the left wing back. The midfield of Mikel, Oghenekaro Etebo and Wilfredid Ndidi was well-balanced, with Etebo to be the furthest man forward.

The game began with intensity. There was a frenetic pace to it: both teams were keen to make their mark. The Nigerians, knowing that they did not need a win unlike Argentina, sat back while their opponents tried to find holes in Nigeria’s defense. Within 15 minutes, the first goal had been scored. Ever Bánega picked the ball up in midfield and sent a sublime pass over the top to the arriving Lionel Messi. Omeruo was onto him, but Messi’s first and second touches completely left him stranded. It was a brilliant piece of play which gave him the space to shoot, and shoot, he did, on his weaker right foot. GOAL. The stadium, packed full of Argentine fans, went into raptures. Argentina were on their way to victory.

If the fans thought this was a sign of an easy victory to come, they were wrong. Argentina came close to doubling the lead a few times but could not. Argentina were in control, Nigeria were in retrograde. In the 32nd minute, Di María broke away and headed towards the Nigerian goal with the ball. Leon Balogun, who had been caught out, ran behind him to prevent the danger, and fouled him expertly. It was a wise decision by the Brighton defender, as he did disguised the foul really well, running across Di María, whose heels got clipped. This was a vital foul. With it, he prevented Di María from getting a one-on-one chance against Francis Uzoho, while also avoiding a potentially damaging red card. However, another referee could easily have sent Balogun off. It was a close call. From the resulting free kick, Lionel Messi struck the upright, but replays showed that Uzoho probably got a slight touch that may have prevented a certain goal. A brilliant save it was.

The first half ended with Argentina having the lead and the lion’s share of possession. They also had 3 shots on target while Nigeria had just one. In the other game in the group, the score was 0-0. As it stood, Argentina were on their way to the round of 16.

As the second half began, things changed pretty quickly. Nigeria got a penalty from a corner, as Mascherano was adjudged to have held back Leon Balogun in the box. Victor Moses stepped up and comfortably converted the resulting penalty. 51st minute, 1-1.

Two minutes later, in the other game, Croatia took the lead. The fact that they had made nine changes to their team didn’t change anything; they were just as strong. Iceland and Argentina were on their way out.

From that point, the tension rose. Argentina started to fear the worst. The Nigerians were fairly comfortable, sitting back and hitting Argentina on the counter. Sampaoli (assuming he was really in charge contrary to reports stating otherwise), reacted. In the 72nd minute, he brought on Maximiliano Meza for the ineffective Angel Di María. Four minutes later, Iceland equalised in the other game. It was bad news for Argentina. They needed to not only score, but hope and pray that Iceland didn’t score too.

Nigeria, on their part, were comfortable. Everything was going well for them. Around the same time, a potentially game-changing moment happened. Ahmed Musa broke away and set in a cross, which Marcos Rojo attempted to intercept. He ended up heading the ball onto his outstretched arm before it fell for Odion Ighalo. Ighalo, with all the time in the world, hurriedly hit the ball on the volley and missed the target. The play was called back for a VAR review after some protests led by John Mikel Obi. After reviewing the incident multiple times, the referee waved off the penalty shouts. The Nigerians were in disbelief as they believed it was supposed to be a penalty, considering Rojo’s hand was outstretched. For the referee, his decision was based on the fact that Rojo had hit the ball with his head before it touched his arm. No penalty, his final decision.

In the 83rd minute, Nigeria again went on the counter attack and Ighalo was one on one with debutant Franco Armani from a difficult angle. He elected to shoot straight at him and Armani saved it. Just three minutes later, Argentina scored. A low cross from Mercado fell to the centre of the Nigeria box and Rojo (of all people!) was on hand to guide it into the net. The Argentina fans in the stadium roared, and the misbehaving Diego Maradona, watching from the stands, started making obscene gestures in front of the cameras. Argentina were going through as it stood, and unless Iceland or Nigeria scored, they would scrape their way past to the other side.. In the 90th minute, Ivan Perisić scored to send Iceland packing. The Argentine players got the message immediately and knew they just had to see out the game to get through. A few minutes of running the clock down was all they needed, and it was over! Argentina had made it through, but certainly not without drama. The Nigeria players fell to the turf in pain, some in tears, as their World Cup dreams finally faded.