With one matchday remaining in Group B, Spain and Portugal had 4 points each, with the Spaniards leading Portugal on goals scored. Trailing the Iberian sides were Iran with 3 points, and Morocco with none. This set up a dramatic final set of games, with Iran probably needing a win to have a chance of qualification and the two group leaders wanting a win to avoid Uruguay in the last 16. 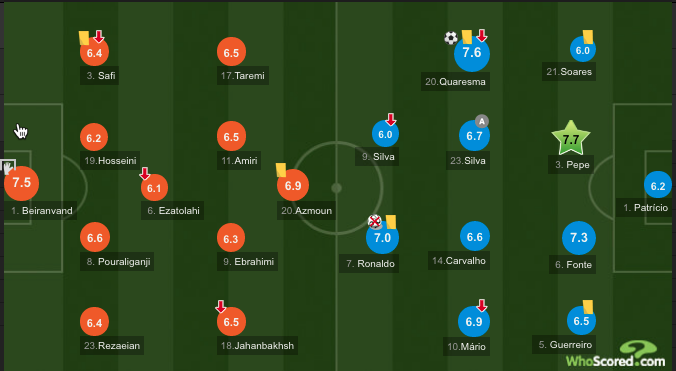 Portugal set up in a slightly asymmetric 4-4-2 as shown. When building up, William Carvalho would drop into a space between the centre-backs and help to connect short passes between the defenders, as well as look to play longer cross-field balls. Portugal looked happy to keep possession in amongst the back four and two deep-dropping central midfielders, before playing longer passes into Ronaldo, Silva or Quaresma who would be situated on or just deep of Iran’s final line of defence.

Portugal’s unwillingness to play through midfield was perhaps due to their lack of technical attacking #8s to find in between the lines, with their 4-4-2 system favouring more direct passing as well as wing play. It was somewhat a shock that Portugal manager Fernando Santos opted to give Ricardo Quaresma his first ever World Cup start in the place of João Moutinho who undoubtedly would have used his technical ability under pressure to direct more of the circulation and penetrative play through the midfield. One reason for this switch is possibly due to Iran’s very compact and organised 1-4 midfield block. Portugal haven’t been a team that really tends to play through the midfield so often under Santos, and it was probably the correct decision here to advance via longer central-to-flank or halfspace-to-halfspace passes, in order to eventually get service into Ronaldo.

Cristiano Ronaldo took up a roaming role, moving around Iran’s last line, and sometimes dropping deeper to receive. He had most success picking up the ball in the left halfspace, particularly in the second half when Iran’s midfield had tired, and more spaces opened up vertically, for him to arrive into, as well as laterally, for Portugal’s midfielders or centre-backs to find passes to him. He was generally poor in this game and is clearly not comfortable when his team has the vast majority of possession (73%). There were numerous times when Portugal’s midfield were looking for somebody to pop-up with an open body in a nice space between lines, however there was nobody there (e.g. below). 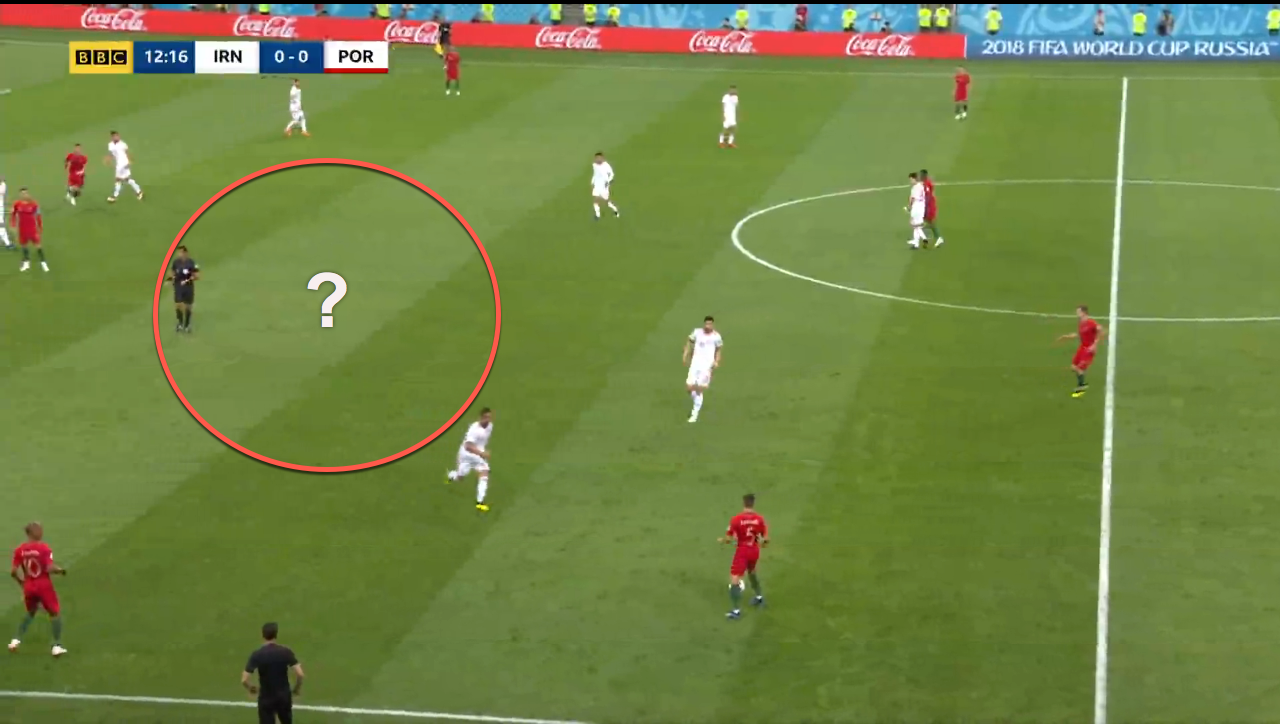 Most of Portugal’s success in attacking play came from combination play on the right hand side. Silva or Carvalho would find Quaresma out wide, Cédric Soares would time his overlap beautifully while Ronaldo and Andre Silva looked to combine in the right half-space.

There were three occasions in particular in the first half where Portugal created good chances from this area. Of their fifteen crosses from open play in the game, nine were from deep on the right side. The physicality of Silva and Ronaldo clearly bothered Iran’s centre-backs, and Portugal’s midfielders timed their movements well to pick up the second ball from the cross around the edge of the penalty area. João Mário had a brilliant chance in the first half from a second ball which he shot over the bar. I would have liked to see Portugal exploit this strategy more in the second half, however they were more content to maintain safe possession as they were 1-0 up for most of the second period.

Portugal’s one goal in this game came just before half-time. Not surprisingly it was from link-up on the right hand side as Adrien Silva, who was Portugal’s main facilitator of possession in this game, gave the ball to Quaresma and then made a brilliant decoy run to give the Besiktas winger space to cut inside and unleash his trademark spectacular strike with the outside of his right boot. It was deserved that Quaresma got the goal and Silva the assist as they were Portugal’s biggest attacking threats, and their best playmakers as well.

Although Portugal dominated the ball with 73% of the possession, the game did become very transitional at times with teams launching three or four counter-attacks in a row at each other before the ball was settled. I think Portugal really wanted to take every chance they could to find a bit of space going forward and often took unnecessary risks with improbable forward passes in attacking transition.

Iran looked the more dangerous side in attacking transition, however this was to be expected as their whole attacking game plan revolves around it. Whenever they won the ball they almost exclusively looked to hit Azmoun up top, and get midfield runners to support him. 57 of their 213 (27%) passes in this game were ‘long’ passes. This is part of the reason for Portugal’s dominance of possession. When they got the ball into the opposition half successfully, they would occasionally look to combine quick passes which looked like set patterns down the flanks before looking to find Azmoun. This is something in Queiroz’s coaching that is discernible from his time working with Sir Alex Ferguson at Manchester United.

Similarly to Portugal, almost all of Iran’s service into the area came from the right hand side. Seven of Iran’s nine crosses in the game came from highly-rated right winger Alireza Jahanbakhsh or right-back Ramin Rezaeian.

In all, Iran’s attacking strategy was pretty ineffective. Apart from their 90+2 penalty equaliser, their only other shot on goal in the game came just after the half hour mark in the first half. Their lack of success here was in part due to Portugal’s sound work in their defensive transition. Portugal’s counterpressing in the first half was very effective in not allowing Iran to play accurate long balls up to Azmoun, or being able to find one of the wingers with space in front of them as Soares and Guerreiro advanced for Portugal. William Carvalho was excellent in the centre of the park, acting as a screen for forward balls into the feet of Iran’s forwards or attacking midfielders, while Adrien Silva was also very effective as a good tackler in the midfield area, especially during counterpressing.

All in all, this was a very dramatic World Cup encounter with what was at stake for each team with it being the final game in the group, as well as numerous VAR decisions bringing controversy to the game. Iran were very lucky to scrape a point through an unbelievably poor VAR decision which awarded them a last-minute penalty. Although the general play wasn’t as exciting as many games in the tournament, the game did give us one of the goals of the tournament in Quaresma’s fantastic finish on his first World Cup start.