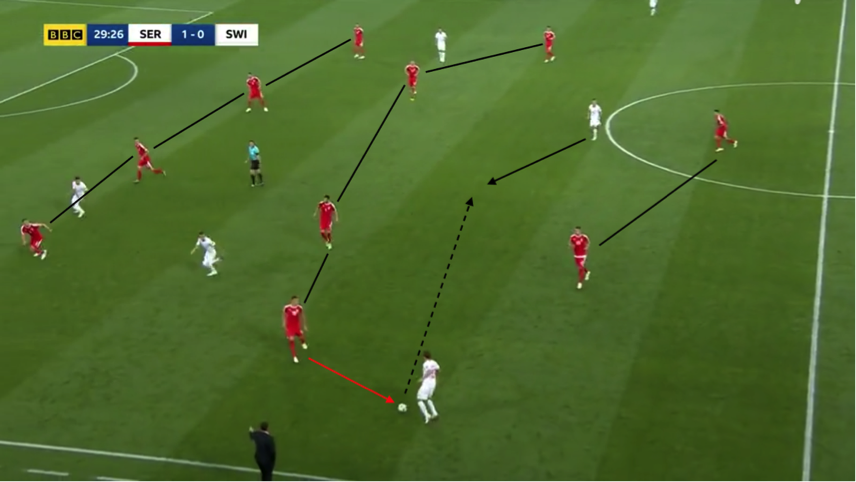 Despite not containing one of the more popular national teams at the World Cup, Serbia vs. Switzerland in round two of the group stage proved to be a memorable one. The Orlovi had defeated Costa Rica 1-0 in the first round, and after a 1-1 draw between Switzerland and Brazil, a second win would see them through to the round of 16. The Swiss meanwhile were optimistic on the back of matching the strong South American side and were hoping to ride that momentum into this match against a national team they had never met on the pitch. After promising performances in the first two group stage matches, both managers Mladen Krstajić and Vladimir Petković stuck to their predetermined lineups, the lone exception being Filip Kostić starting at left wing in place of Adem Ljajić for Serbia.

Serbia began the match on the front foot. The attacking directive of their game plan was clear; to progress forward in the wide areas via the full backs and Dušan Tadić, who would deliver crosses in towards the central attackers Aleksandar Mitrović and Sergej Milinković-Savić. This proved effective immediately, as in just the fifth minute Serbia took the lead. With the ball down the right side, Tadić whipped a cross into the box where Mitrović, despite being marked by Fabian Schär, managed to head it in from close range.

With the early 1-0 advantage, Serbia continued to attack in this way. Switzerland wanted to control possession by playing out of the back, and Serbia seemed content with this in the first half, as shown by the possession stats below.

Most of Switzerland’s best chances this half came through their talisman Xherdan Shaqiri. Shaqiri’s low center of gravity gives him the ability to touch the ball more often with his quick legs than more lengthy players, making him difficult to dispossess and more agile which helps spatial movements. There were multiple moments in which either Shaqiri or Granit Xhaka would occupy the space between Serbia’s forwards and the deep-block-playing midfield, attempting to find openings within that block but to little avail. Xhaka receives the ball in front of the 4-4-2 Serbian block, and manages to split a pass between the midfielders, but the attack is nullified by the Serbian back line.

Serbia were undeniably the more effective side in the first half, with disciplined defending and strong counter-pressing. Switzerland looked disorganized and indecisive at the back in possession, which as a result didn’t give the attack many clear opportunities. The Serbians were in control.

In the second half, Switzerland came out looking more aggressive with more direct passes and less sideways passing around the back four. This began to give Switzerland more opportunities to create chances, as Shaqiri received the ball more often. Strong evidence of this occurred seven minutes in. After a Serbian corner was headed over the bar, the Swiss, instead of building progression slowly through possession, quickly organized a counter-attack. Xhaka made a pass down the left touch line towards Ricardo Rodríguez and Steven Zuber. Serbia’s defenders, expecting a more conservative approach to their defensive third similar to what Switzerland had attempted in the first 45 minutes, gave up space in front of the box. Zuber used this space to switch play to the open man on the non-overloaded side of the pitch, in this case Shaqiri. Kolarov managed to block the stocky midfielder’s shot only for it to fall to Xhaka, who was running behind the attack down the left half space, and the Arsenal midfielder equalized off a brilliant strike.

The substitutions of both Mario Gavranović and Breel Embolo accented the intent by Petković’s side in the second half. Both showed improved movements into space and fresh energy compared to the counterparts they subbed on for. Defensively, Switzerland’s shift to a deep block forced Serbia to possess and push forward, which gave Switzerland space to counter. In this new style of defending the Swiss seemed better prepared than in the first half. When Serbia would attack, the Swiss back line, most notably Manuel Akanji, was more disciplined in their approach to the ball, timing their pressing and tackling well, often forcing dispossession or passes to miss their mark. The Swiss defense were much improved in the second half. Here they stop a Serbian attack by pressuring the ball off an attacker; Akanji pressures the ball as soon as it is received via a player just previously pressed by Rodríguez and Xhaka. Those two continue to press the ball, and Behrami joins in from the opposite side, simultaneously blocking a potential outlet. If the ball did get through to the open man, two other defenders are there to contain. On this occasion, Xhaka successfully dispossessed the attacker.

Ultimately it was all these adjustments and key figures that culminated in Switzerland’s game-winner. Akanji’s headed clearance began another Swiss counter-attack, and through two direct passes down the center of the pitch(and partly some very poor defending) Gavranović managed to slot a pass to Shaqiri who broke free towards goal. Despite Tošić’s best efforts the new Liverpool man scored what would end up being all that was needed to send Switzerland through to the knockout stages.

Often, football is a game of adjustments. Managers go into a match with a carefully planned game model and make changes throughout based on various factors. Petković’s tactical and substitutional adjustments made at half time and throughout the second half proved more effective than Krstajić’s lack thereof. While the match will more likely be remembered for the powerful goal celebrations of Xhaka and Shaqiri, the tactics themselves were brilliant proof of how vital the connection of a manager and their players can be when they are on the same page of a game plan.