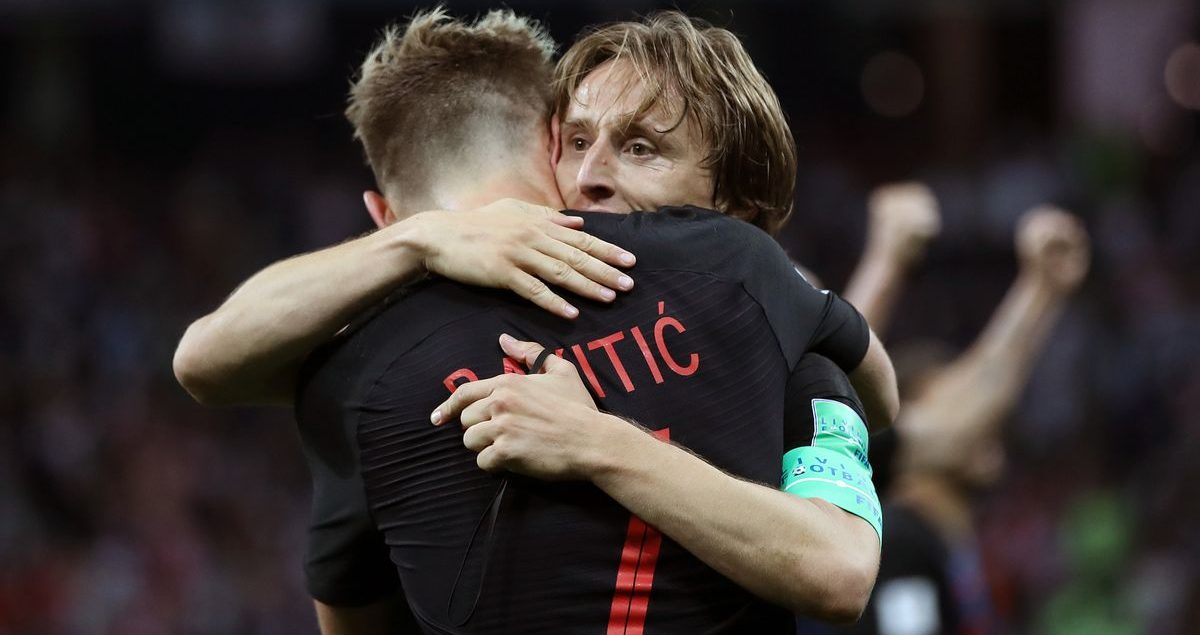 With the 2018 World Cup now in the books, we can begin to look back fondly on what was a tournament filled with magical moments from beginning to end. So many teams, players, and storylines stood out throughout the group stages all the way up to yesterday’s final, but perhaps none more than Croatia and their two star midfielders, Luka Modrić and Ivan Rakitić.

The pair managed to carry a strong, yet not all-conquering Croatia side out of what looked to be a tough group, and provided a valiant effort in the final against a ridiculously talented French team. Although the pair are crucial for their club sides, Real Madrid and Barcelona, they are much more understated than some of their fellow club teammates. Obviously Messi and Ronaldo are, or were, the first names to come to mind when these two great clubs are mentioned, but perhaps the two Croatians will finally garner the respect they have been so deserving of in recent years. Two wonderful players, from each side of arguably the greatest club football rivalry in the world, came together to produce magic in six straight wins, and lead their team to the brink of victory.

After the duo’s first match together, albeit a solid win versus Nigeria, many were questioning the viability of the partnership, as the victory was due more to the ineffectiveness of the Nigeria team rather than the brilliance of Croatia. With the two playing similar positions for club, Modrić and Rakitić were being compared to the failed partnership of Frank Lampard and Steven Gerrard for country, despite their heroic exploits for their respective clubs. In addition, there were questions over each individual’s ability to perform without a solid defensive midfielder in behind them, as they have in Casemiro and Sergio Busquets for their clubs. However, all doubts were soon put to rest.

Going into a game against Argentina in which Messi was expected to outshine all, it was the two Croatian midfielders who transcended the entire match. Zlatko Dalić made a wise tactical switch for the second match, in which Marcelo Brozovic slid into the defensive midfield role, allowing Modrić to push up the field and affording Rakitić more creative freedom. This proved to be a vital switch, with Modrić and Rakitić each putting in a masterclass. With Modrić playing the primary playmaker role from the #10 position, and with Rakitić spraying passes from deep to Croatia’s wide players, Croatia dismantled Argentina with the help of a wonderful goal from Modrić. Each of the midfield stars scored a goal and announced their presence as a powerhouse in this World Cup.

Although they were not paired together for the final game of the group stage, they led Croatia past Denmark in the Round of 16, with Modrić leading by example, stepping up for a penalty after missing the go-ahead penalty in extra time. Rakitić had a commanding match versus Denmark, but his presence faded a bit as the team progressed. In contrast, Modrić’s quiet greatness fueled Croatia to the end. Against Russia, he put in a complete performance, completing multiple tackles, finishing with an 87% pass accuracy, and providing the assist to put Croatia in front in extra time. After completing two 120 minute victories back to back, the diminutive playmaker put in a more defensive, yet still vital, performance against England, in which the world had underestimated Modrić, Rakitić, and their compatriots. With a pass accuracy of 89%, with two key passes included, Modrić once again ran the show. Together, two of La Liga’s greatest playmakers had led Croatia through three extra time matches to their best World Cup performance in history, and it almost seemed destined to end in glory.

Unfortunately for the pair, who had won over so many neutrals with their wonderful control of the pitch, football can be cruel. An own goal and a questionable handball call made with the help of VAR did not help Croatia’s chances of claiming victory. An equalizer at 1-1 gave the underdogs hope, but in the end, the French were just too much to handle. Modrić and Rakitić were relatively average on the day, but it should not discount all of the work they had put in to reach this point. Croatia’s other players must also be commended for incredible performances and heart throughout a difficult tournament, with Mario Mandžukić, Ivan Perišić, and Dejan Lovren having impressive tournaments. As a result of their team and individual performances, Modrić was deservedly awarded with the Golden Ball, or best player of the tournament, after putting in a warrior’s performance for 3 extended matches and the final, and Rakitić’s performances should be remembered as similarly heroic. In one of the best World Cups of all time, these two elegant playmakers will be remembered as the best midfield partnership in the tournament, and the leaders of one of the greatest underdog stories in World Cup history.