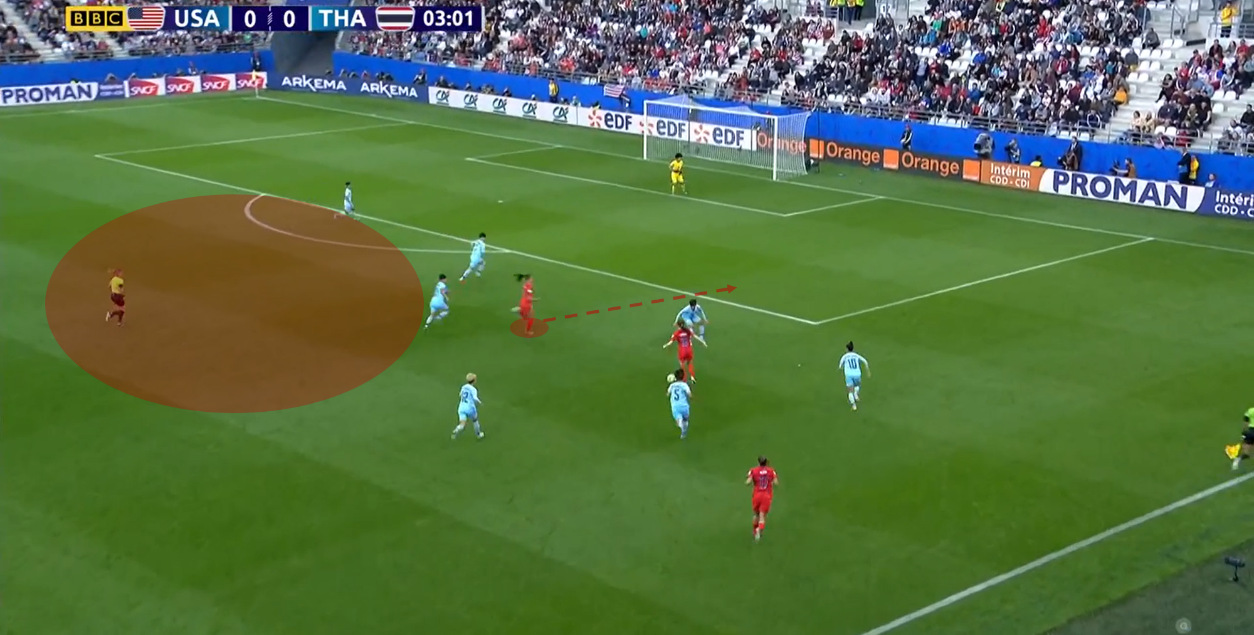 The USWNT beat Thailand by an impressive 13-0 score. The American team is one of the favorites to win the World Cup, a trophy they currently hold from their 2015 campaign.  Their performance was at the top of their level, with a lot of chances created, 40 shots on total, with half of them going on target. It is fair to say that Thailand was not the best opponent, with almost no professional experience, but there are great insights and outcomes from this first game that can be analyzed and highlighted. Even though the stars of the team are in attack (Morgan, Rapinoe, Heath, Lloyd), it is the midfield that will make this USWNT such a dominant collective. Yesterday, the trio Mewis-Horan-Lavelle was excellent on and off the ball, moving the ball well, connecting defense to attack and reacting well to stop counter-attack attempts. It is not a coincidence that all of them scored, with Lavelle and Mewis having a brace each, and this performance gets even better when you realize it was their first game in a World Cup. Up top, Alex Morgan had a record breaking game, with 5 goals and 3 assists, showing also the importance of the 29 year old Orlando Pride’s striker on this team.

More than just the 13 goals

More than just the 13 goals scored, the most interesting and important thing about this game was the chance to see how ready and prepared the team was. Individually and as a team, the players knew the plan, the system and who they were playing against. While some can argue that this game was already on due to the big individual skills’ difference between the two teams, I believe that this tactical and behavioral preparation helped a lot for this (almost) perfect exhibition by the USWNT.

The US played in their typical 4-3-3, with interesting variances and alternative systems along the game. With a dominant style of soccer and high press from early on the game, the team tries to explore both outer and inner corridors, switching the ball side to side and exploring the ability of Rapinoe and Heath as wingers, supporting the goal scorer Alex Morgan. Two other positions that are very important on this system are the full-backs, Crystal Dunn and Kelley O’Hara. Their differences make the US system more complex and harder to stop (as the examples on the pictures show):

On the right side, O’Hara balances the team in more central positions, by giving the outside of the corridor to the creative Tobin Heath and supporting Rose Lavelle to create plays inside. On the left, the versatile Crystal Dunn plays in a very vertical way, running up and down the field and overlapping Rapinoe, who lakes to come inside to connect with Morgan and the midfielders. In the space between the central and the left corridor (half space) is Sam Mewis who usually shows up to support, coming from deeper positions to make runs inside the box.

These different behaviors exploring the width of the field allow the center midfielders (Lavelle and Mewis) to position themselves higher on the field, especially against teams with a very deep block like Thailand. This strategy of getting the duo high and having always at least one of the full-backs up on the field creates space to build play, allowing Horan to be free and work on the ball, switching the side of the game by connecting with the full-backs (picture below), leaving only the center back duo behind them. Depending on the play, either Rapinoe or Heath join Morgan in a more central finishing position, to have more people on the box and attract defenders. One of the players that allows this super high positioning and keeps the team organized is Julie Ertz, who played as a center back on the first game. Ertz had the mission to shorten the space between the midfield and the defensive block, by stepping to players between the lines and forcing Thailand to play backwards until the rest of her teammates recovered to their positions: In the second half, and with a lot of goals scored in the first ten minutes, the US were able to try a different system, which could be used in games where they were in disadvantage close to the end of the ninety minutes. The coach Jill Ellis put Christen Press and Carli Lloyd on the field, on a very offensive 3-3-4 / 3-5-2, with Lloyd and Morgan up top and Press and Rapinoe on the wings. Ertz jumped into the midfield to connect with Horan and Mewis, leaving Dhalkemper with the full-backs more central on a back three. Women of the Match:

Alex Morgan. More than just the five goals or three assists, she was everywhere and was very involved on the offensive plays of the US. She is not only a goal scorer: she works for the team with and without the ball, making sure her teammates have either an option to pass or space to play. The first example shows how important Morgan’s runs are to create space for the midfielders to show up where they enjoy the most: top of the box. Both Lavelle and Mewis like to step to those areas to shoot from outside or just by dribbling the ball forward, and Morgan makes sure she attracts defenders with her to open those spaces: Another great characteristic of Alex Morgan is the way she plays with her back to the goal. She works as a pivot to her teammates, holds the ball for the right time and knows exactly when to release it to her teammates in good positions. Here, an example of how many players can get attracted by Morgan’s work on the ball, leaving empty pockets and spaces for the midfielders or wingers to support her and run to dangerous positions up on the field: