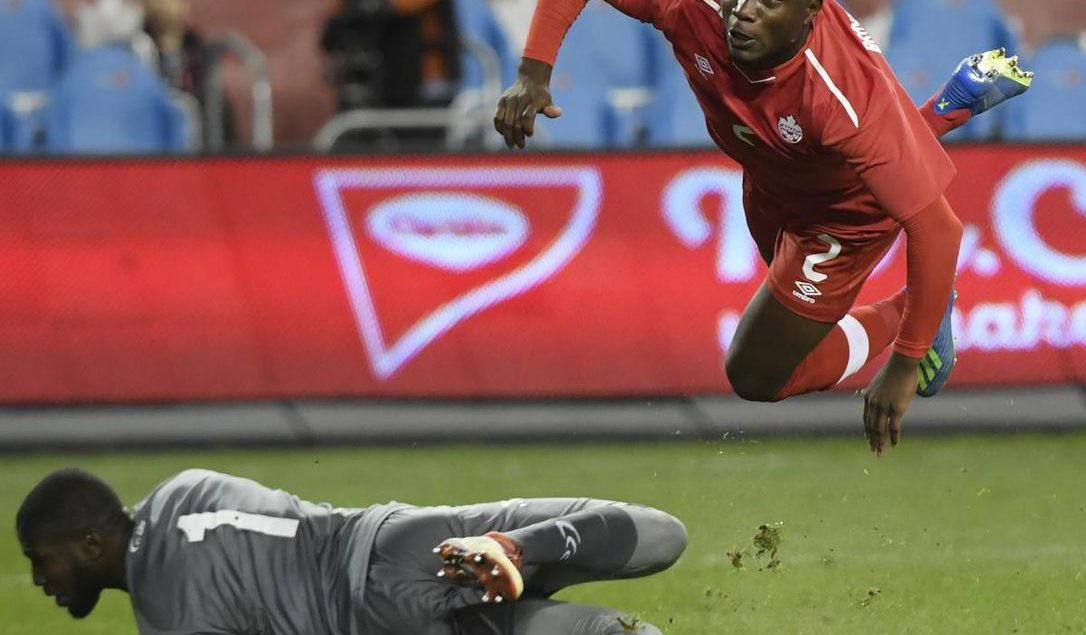 Dominica proved to be a good sparring partner in Canada’s second Nations League match. Our guest writer, Rocco Fasano, was there for Breaking The Lines.

Canada hosted its first ever Nations League match in Toronto’s BMO Field. Dominica, a tiny island nation, with vivid memories from their last visit to Toronto when they suffered a 4-0 defeat, proved to be good competition for a Canadian side packed with teenagers.

The final score of 5 to nil that matured in a crisp Toronto evening was the product of not only improved finishing by the Reds, but also of improved game play.

“Our attacking options are different now, as is our on the ball and off the ball movement. We’re more confident,” Brampton veteran midfielder and Canadian captain Atiba Hutchinson said in the post game presser.

Canada got off the mark right away, with Belgian side Genk’s Jonathan David slotting in a low cross by soon-to-be Bayern Munich midfielder Alphonso Davies.

The story within the story? Alessandro Busti, back up goalkeeper for Juventus under 23, got his debut between the posts for the Canucks, locking down his choice as a Canadian international. The 18-year-old made his debut in his native Toronto, collecting his first clean sheet in the process.

Quick goals in succession by Cardiff City’s Junior Hoilett first, and then Cavallini put the result beyond doubt by the 18th minute.

In the post-game presser Canadian captain Atiba Hutchinson remarked on Cavallini’s delicious Paneka-style penalty. “It was a great penalty… It kinda surprised me”.

The second half saw Coach John Herdman take advantage of the comfortable cushion to give some promising youngsters the opportunity to make their international debut, and – most importantly for the Canadian soccer community – to become “cup tied” to the Canadian national team.

One of these, and the most awaited, was Ivorian-born Ballou Tabla, who currently plies his trade at Barcelona B, and has trained with the Blaugrana’s senior team (yes, Messi was there too). Tabla entered the match in the 54th minute and immediately put his flamboyance on display with step overs, simple but good passes and getting on the score sheet (albeit the goal was not allowed on account of an offside in the build-up).

Another was Olympique Lyonnais defender Zachary Guillard who bravely shut down Wade who was headed alone on goal shortly after coming on in the 66th minute, and nearly scoring on a subsequent play.

In the meantime, Canada managed to get on the score sheet twice more: first, thanks to an own goal and the second thanks to Cyle Larin slotting home another assist by Alphonso Davies.

Missed chances to add to their generous lead such as a wondrous tic-tac-toe play between Osorio, Davies, and Tabla that Dominica goalkeeper Prince shut down, and Guillard’s attempted chip that sailed over the bar were the last meaningful statements of the game.

After treating the Canadian home record crowd of 10,500 to a five goal route coach Herdman was happy in the post-game presser, but wished for a few more goals, “We had to break a tight block back there, we needed some of that flair we saw out there. Our future adversaries will mean tougher player selection. I keep pushing my players in one-on-one meetings”.

When asked about employing so many teenagers today, Herdman defended his selection “it was needed at this time. This is a good group of men, the youngsters will flourish also because of the nature of the veterans who have helped them get integrated into this group”.

Canada will continue its Nations League journey on November 18 when they host St. Kitts and Nevis.