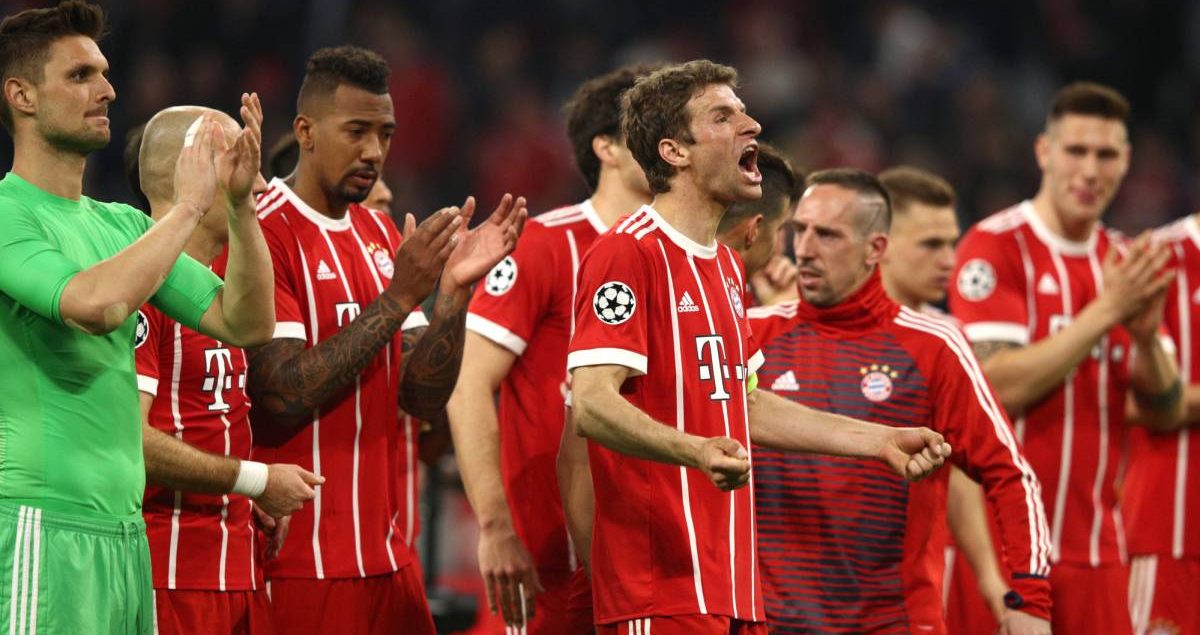 Hala Madrid, Aupa Atleti, Visca Barca, Forza Juve. These are the motivational catch phrases common throughout the football world and all, more or less, carrying the same meaning and translate along the lines of “Go ‘insert your team of choice’ .”In contrast, Bayern Munich’s “Mia San Mia” is a way of life, it emphasizes the conservation of the roots of the club, its authenticity. It is well known and common today for football teams to be viewed as investments, many owned by isolated actors such as Qatar’s Paris Saint German. Money more than ever rules the football world, with the exception of teams like Bayern Munich. One example of this was Bayern’s reluctance to raise season ticket prices. As Bayern’s own President Uli Hoeness once said, “We do not think the fans are like cows, who you milk. Football has got to be for everybody. That’s the biggest difference between us and England.”

A trademark of Bayern and what separates it from the rest is the oneness between fans and the club. Fans are remarkably integrated in club decisions, the camaraderie is discernable whether it be from open training to fan club visits, the famous Oktober Fest or even matches against fans.

Most importantly, the sense of belonging visible through the fans ownership of 51% of the club. The club is run by former players and financed by sponsors not owners. Everything stays in the family. There is an important distinction however that former Bayern Goalkeeper Oliver Kahn highlights, “there is nothing arrogant about Mia San Mia it means maintaining your modesty
when you’re successful.”

While the Bavarian values are unwavering and its essence remains, for several years the general sentiment of the club’s identity had been fading coach after coach. The culmination of the absence of Bavarian tactics reached its boiling point after an underwhelming Ancelotti campaign. The veteran players lost confidence in the three-time Champion League titleholder
which drove the signing of well-respected coach Jupp Heycknes. The Jupp effect was immediate. It was as if a reset button was hit.

The return of a German coach revived a sense of familiarity in the dressing room. According to BILD, Heycknes began by bringing back discipline, which ranged from: banning cell phones while eating or in the dressing rooms to sanctioning tardiness to training practices, longer warm ups, increasing weekly stabilization exercises and trying to avoid clans within the group to foster a tighter bond between teammates regardless of their origin. Almost as an acknowledgment of the teams past complications with regular injuries Jupp also brought Dr. Muller-Wohlfahrt and his medical team back to Bayern.

Most importantly, the tactical changes on the field have also translated into success with Heycknes formation change from Ancelotti’s preferred 433 to a 4141 and 4231. The coach has made the most of his players such as in the case of Javi Martinez who was moved back to his more natural position as a defensive midfielder. Arturo Vidal before suffering a knee injury, for most of this season has been at his best with an exceptionally consistent work rate in his habitual double pivot role, one of the most complete midfielders still in the game he often shifts from a 6 to an 8, this season he’s had a hand in gaining Bayern important points with 6 goals in the Bundesliga as he often brazenly pushes forward finding spaces between the lines.

While injuries have hindered Corentin Tolisso and Kingsley Coman’s continuity, both players have added a much needed attacking component while transmitting the hope of youth to the future of Bayern. The truth is this season there is something to be said about almost every Bayern player. The signing that has pleasantly surprised the Bundesliga is this year’s European football comeback kid James Rodríguez. James has played as a CAM pushing forward both with Colombia and every one of his former clubs. Jupp Heynckes’ novel approach to reaching James full potential has been an epiphany granted by the football gods. Heycknes has thus far giving us the best version of James playing a far deeper role than ever before and morphing into a box
to box midfielder. Jupp has exploited his vision but most notably refined his tactical ability significantly increasing successful tackling and take ones. The Colombian finished his first season as the highest rated player in the Bundesliga with the most key passes per match and as Bayern’s pillar for creativity.

As Heycknes himself put it, “In terms of his current form and how well he has settled in, James has been a godsend for Bayern.”

At Bayern, however, there is not a star that shines brighter than another. The culture in Munich does not involve individuality, flamboyancy or trendy haircuts galore. With the arrival of the German coach, players like Muller have once again gained confidence and are back to their goal scoring selves. With Lewandowski averaging a goal every 88 minutes, Thiago’s return has injected the team with a magic comparable to only a handful of players.

Despite the uncertainty that comes with facing Real Madrid, the atmosphere is more positive than ever in Munich. Heycknes has awoken a giant and the collective wind of success that is gusting through Bavaria is palpable. There seems to be a general acknowledgment in Bavaria that the tides are gradually turning in their favor and whether or not Munich reaches the Champions league Final there is a sense that there is a project building. Brewing in at the Allianz Arena is a combination of worldwide talent, German veterans and an exciting new generation of German talent such as Joshua Kimmich, Niklas Sule and a newly acquired Leon Goretzka. It is now safe to say that Bayern fans need not feel nostalgic following the departure of Phillip Lahm, after his passage from a defensive midfielder to CB, Kimmich has consolidated himself as one of the upcoming Right Backs in the world with an impressive attacking edge converting 12 assists this season.

There are several question marks that are still to be determined, however. While the return of Neuer appears to be approaching a return date has not yet been set. There is also the question of Bayern’s newly signed coach Niko Kovac who is set to take over in July. While there have been doubts surrounding Kovac after the inability to sign the favored Thomas Tuchel, his Bayern DNA and managing experiencing in German football appears to placate some of the skepticism. The uncertainty that accompanies the unknown is also somewhat mollified in this particular circumstance due to the vetting and approval of the trusted outgoing coach. While both have signed new contracts the prevailing question that may be answered during the next transfer market, however, is on the continuity of Robben and Ribery as regular starters. There are several names that are thought to be considered to rejuvenate both wings but there is not much concrete indication of Bayern’s course of action.

Heading into the fourth Champions League semifinals in the last five seasons there are several atypical conditions that may favor Bayern unlike that of the prior years. Throughout his career Jupp Heynckes’ Bayern has clenched 73 wins and 4 losses in 82 games. The German is the first coach to go undefeated in 13 straight Champions League games. Bayern ‘srecords against
Spanish teams is 19 wins 3 losses. While it may very well look like Vidal will miss the rest of the tournament Tolisso is likely to step up in his place, as a consequence while Bayern loses a workhorse it also gain pace and composure. Another aspect that differs from last year is the addition of Wagner to the roster which provides a reliable alternative in attack. Robert
Lewandowski, unlike the first leg against Real Madrid, will also be available .

Bayern is the only remaining European club aspiring to win the treble. While having recently won their 6th straight Bundesliga may be undermined by many football fans because of the scarcity of well-known competition, only Real Madrid and Barcelona have more goals in Champions League history than Bayern Munich. Whether or not Bayern attain Champion League glory this season, Jupp has put Bayern on the path back to the core principals of its football and the rebuilding of Bayern Munich is one of the most promising in its recent history.