Organized in last year’s 3-4-3 that led them to the Premier League title, Londoners shown their defensive strength: a zonal 5-4-1 which totally nullified Barça’s use of the ball.

Barça lined up in 4-4-1-1, with Paulinho and Iniesta as inside wingers, behind Messi and Suarez, and in front of Busquets – Rakitic as doble pivote. As usual, Alba and Sergi Roberto were operating very high on the wings to stretch opposition defence.

But Chelsea’s back5 were totally ready for that. Fullbacks Alonso and Moses were ready to go out on the pastime if Alba or Sergi were to be served in feet. Then, the opposite fullback would stick inside as a 4th defender.

Chelsea’s 541 in their half: Pedro puts pressure on Pique in the halfspace, Alonso is ready to go out on Sergi on the wing, Moses comes to stick inside

In case of a vertical pass in the center of the pitch, every Barça player sitting between the lines was attacked on the pastime by a central defender, whom was always covered as they play 3 at the back.

Kante and Cesc were also ready to press Busquets or Rakitic, or to get back to Messi or Iniesta if they moved inside.

Higher on the pitch, Hazard was isolating Busquets, as Willian and Pedro were pressing Umtiti and Pique in the halfspace, as they were ready to eventually get back to Iniesta or Rakitic in case they were to drop back.

Wingers defend the half-spaces and fullbacks defend the wing. In zonal marking, so that Barça’s movement could not destroy Chelsea’s structure. 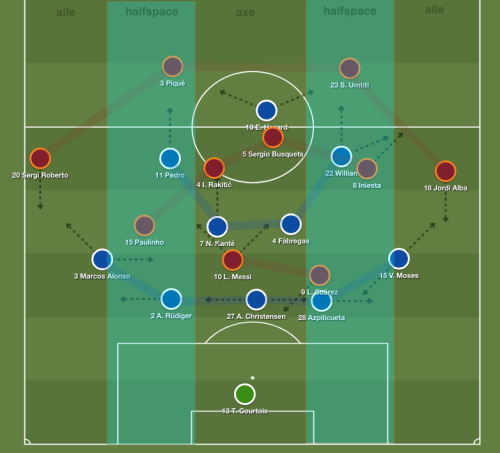 Chelsea’s 5-4-1 in defensive phase: Density in the center of the pitch, wingers in the half-spaces and fullbacks outside.

As Barça technically down graded with the (numerical) switch of Neymar by Paulinho, they didn’t play in a way that promoted triangle play and third man runs: a lot of players evolved on the same horizontal lines. 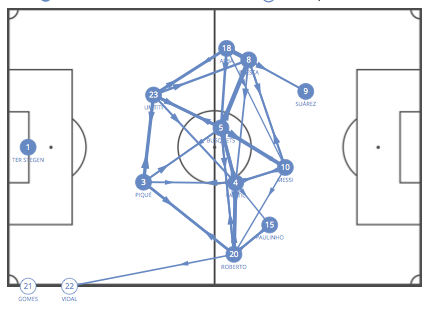 That being said, in this very low set-up, Chelsea didn’t enjoy a lot of solutions forward when they won the ball back.