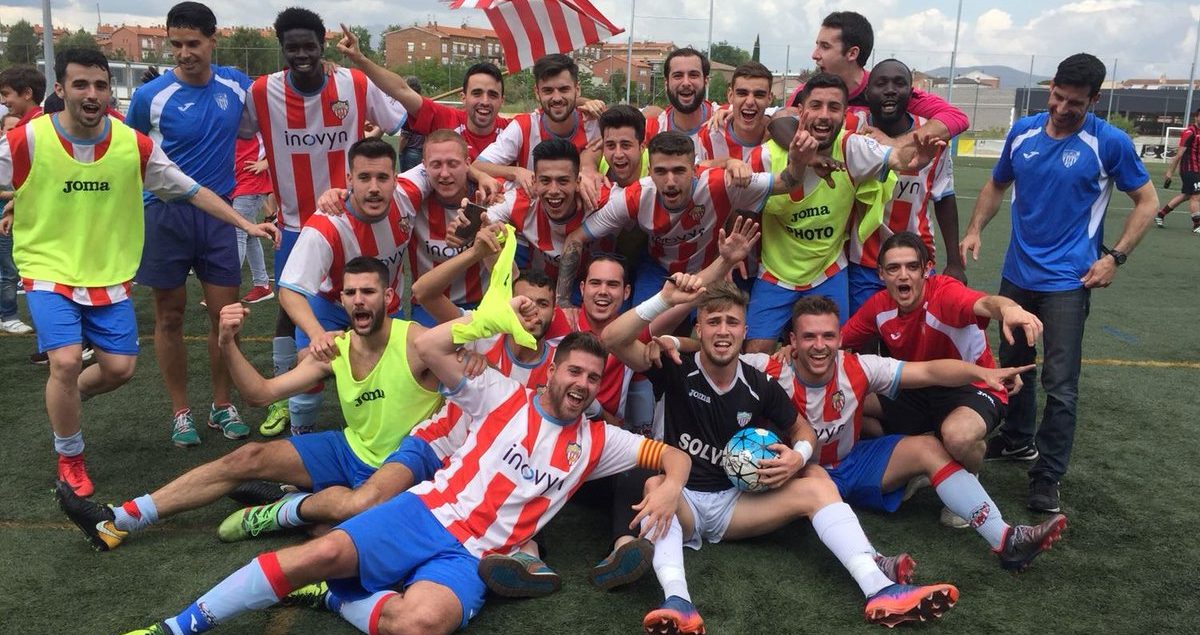 When one thinks of Catalonia, several prominent entities spring to mind. Independence, FC Barcelona and the imposing majesty of Montserrat. Living in the shadows of all three is C.F. Martorell. Based in the town of Martorell, around 22 kilometres northwest of Barcelona as the crow flies, the club finds itself in the sixth tier of Spanish football. Yet despite being situated on the borderline between professional and semiprofessional football, this does not feel like a team whose standing is so miniscule. The atmosphere and infrastructure do not befit the notion that this is a club of obscure nothingness, of a mere Sunday league joke. Instead, what can be found is a club with deep roots to the community, an impressive level of professionalism, and a holistic approach to developing youth football in a hotbed of talent. A proud Catalan town with a proud Catalan team, the red and white of Martorell and the yellow ribbons of independence dominate the cafés, schools, streets and day-to-day activities of those who live and breathe football  in Catalonia.

A merger in 2002 between Sporting Martorell and Unió Esportiva Martorell gave birth to the modern day incarnation of C.F. Martorell. This preserved the continuous century-long period in which Martorell has hosted a football club and continued to allow the sport and community to grow as one. Home matches are currently played at Complex Esportiu Torrent de Llops, which encompasses both the football ground and an adjacent athletics stadium. The connection between the two is shown on match days, with regular crossovers of spectators between the football and the athletics events. The stadium itself is impressive too. A single tier which encompasses a bar, disabled access and seating, allows C.F. Martorell to instill a sense of professionalism despite their lowly stature. This is a common theme throughout the club.

The move to this stadium from the previous playing field was a gargantuan leap. The former ground is a shadow of its former self, a dirt patch more akin to bog snorkeling than football. That ground is now used for cricket matches, as a wave of South East Asian immigrants to the area has provided a new sport to the Catalan spectrum. Played by many, it is a testament to the diverse, welcoming environment in Catalonia that cricket co-exists with football. The improved infrastructure of C.F. Martorell has paved the way for the informal leisure activity of the town’s immigrants, this inadvertent benefit allowing two distinct demographics to escape via their culture.

For some, the old ground holds precious memories. Middle-aged match-goers fondly remember going to the ‘Sand Stadium’. This rough pitch was easily accessible to youngsters and it made for a good way to pass a weekend afternoon. The Sand Stadium was a raw, amateur relic that represented the lifeblood that has made football the most popular sport in the world: the idea that you can put two goals anywhere and magic will happen.

In contrast, the new stadium revokes that sense of connection to the dirt. On a larger scale, the same has happened with Arsenal and West Ham’s recent moves from legendary arenas like Highbury and Upton Park to Emirates and London Stadium, boisterous, if outdated stadia compared to modern, yet relatively silent relics. That primal, youthful connection dissipates, and the same men who once watched on the sand now witness their sons strive to become a Martorell player, rather than merely watching. Although, some parents feel that it is too much to ask of young children to train twice a week and play on the weekend. The heightened professionalism comes with its downside, perhaps force-feeding football rather than enjoying natural consumption.

That professionalism goes beyond its surroundings. The club’s objectives are as political as they are sporting, with one of them being to unionise people of different towns, cities and races through football. Another seeks to ensure every player receives ‘human’ training, specialising in personal development as well as sporting excellence. This reads like a manifesto from an aspiring politician, but instead, it is an admirable mission statement from a sixth-division team in Catalonia. Other objectives include training all youth players who wish to play, allowing them to develop regardless of skill level. Perhaps the most impressive objective is the club’s desire to set a benchmark, making C.F. Martorell the pinnacle of sporting and social excellence, for people to look towards as a target. Whilst this is a lofty dream on a wider scale, the club are gradually achieving their goals.

The youth setup at the club is astonishing. Despite the town’s meager population of 27,645, Martorell’s boasts 31 boys teams and five girls teams. Along with the men’s and women’s first teams and a men’s veteran team, C.F. Martorell holds 39 distinct, individual teams at the club. This is a town that lives and dies by football and this is born into the children. A genetic node, to love the sport and to make it one’s entire life. Each Catalan child dreams of lining up for FC Barcelona, but C.F Martorell provides the protective and wholesome springboard from which they can leap. By honing the skills of these children, the coaches (whom are mostly UEFA-licenced and have also worked with teams such as RCD Espanyol) can tap into that raw, street-gained talent that is so common in Southern Europe. By cultivating the skill that blossoms between the smashed windows, parked cars and onlooking grandparents, Martorell’s professional environment rounds off the jagged edges, with tactics, unity and pride.

Children proudly don the branded tracksuits and training tops of the club around the town and in the schools. The local sports shop has an entire section dedicated to C.F. Martorell, with the red and white stripes attracting attention like a barber shop. With the mere mention of the club, children begin to reel off their position, squad number and how many goals they’ve scored. The club’s Twitter feed regularly updates with the performances of all its youth team results. It also posts a team of the week, filled with the youth players who have shone at the weekend. This may seem minuscule, but to the children, it is like seeing their name flash on the Camp Nou scoreboard. The social media work is admirable; the quality of photography, social engagement and graphic design would make several Premier League teams blush. And with the full integration of the women’s first and youth teams into the club, Martorell are already one step ahead of several European giants. One local told me that women’s football has risen in popularity over the last five years in Catalonia, and that the quality is what gets a hold of people’s attention.

Perhaps C.F. Martorell’s youth policy is dictated by what part of the world they find themselves in. Barça’s famous La Masia has introduced the world to world-class talents like Xavi Hernández and Lionel Messi. The full integration of the youth into FC Barcelona, from training to education to social development, has been admired and praised. This methodology has seeped into the rurality of Catalonia, spreading like a intoxicating blanket of Cruyffian theory.

Of course, C.F. Martorell are not on the same scale as Barça. Trapped between the shadow of  Camp Nou and Montserrat, the club knows it fights an uphill battle to garner true supporters and diehards, with Barça being the all-consuming, omnipotent deity that absorbs the hearts and minds of Catalan football fanatics. Nonetheless, the lack of raucous support is made up for in the club’s insistence on developing football and footballers in the right way.

While the children may pretend to be Sergio Busquets or Luis Suárez when playing in the shirt of Martorell, they are instead creating their own legendary status on the pitch, writing memories into the history books. Memories that will live on in their parents and coaches and spectators. Memories that they will look back on with deep fondness, a time where despite a tumultuous political atmosphere, they had an escape. C.F Martorell is the escape, the dream that everything is slightly better in the world when playing football.

What does the future hold for C.F. Martorell? A notoriously confusing and difficult ascent through Spain’s lower leagues will take time; they must maintain a level of excellence on the field while also continually improving to work their way up increasingly competitive tiers. At the moment, the senior team sit third in the league, having accrued 23 points from 12 games and with the meanest defence in the division, having conceded just 10 goals so far. They face league leaders Atlètic Sant Just F.C. on Sunday, and a win will take them within one point of the top spot.

The addition of ‘B’ clubs in the divisions above them will also hamper their chances. Whilst Pep Guardiola is a big advocate of the B team method, and with it being increasingly commonplace in Spain, it does feel like a kick in the teeth for small clubs such as Martorell, who are trying to break through a glass ceiling. A glass ceiling that is reinforced with the money bags and tensed fists of the Spanish football elite. One only has to look to Real Murcia, who have resorted to selling shares to stay afloat, despite being in La Liga a decade ago.

Maybe it just isn’t meant to be for C.F. Martorell. Maybe their existence is to merely be the small team in Catalonia, and to never come close to challenging for a place in the top tier. Yet, this isn’t fair. It isn’t fair to the owners, coaches, players, parents and fans. This club is a living embodiment of community football, a breathing epitome of Catalan football. A prominent figure connected with the club states the following line: Sólo un objetivo, hacer grande al C.F. Martorell. Only one goal: to make C.F. Martorell great. This is the poignant sentiment that makes Martorell a special club; an intense drive to improve and develop against a backdrop of political upheaval, globalisation of football, and children’s dreams.