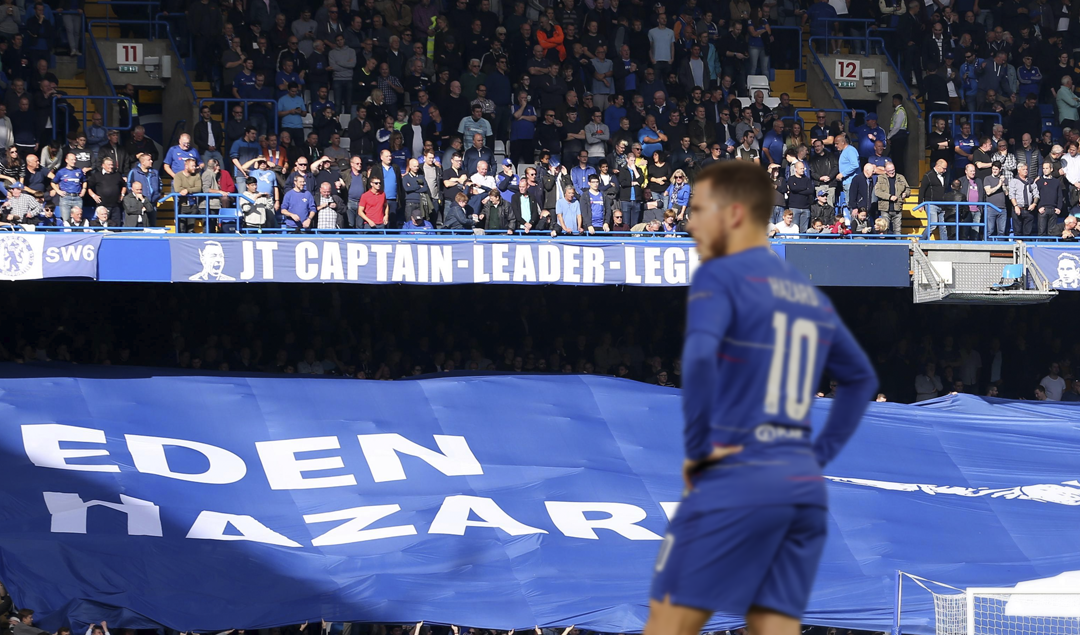 It is 5th May 2019, and Maurizio Sarri’s beleaguered Chelsea have just clinched a 3-0 victory against Javi Gracia’s Watford. It is a crucial result, because it ensures that despite all the turbulence that has buffeted Stamford Bridge this season, the Blues will be making an appearance in the Champions League next season. Praise for the performance and the result is rightfully being lavished on young Ruben Loftus-Cheek, who dominated proceedings for the home side after being subbed on in the 10th minute.

But there is one man for whom this victory is even more significant, and indeed, is single-handedly responsible for it. After all, he was the one who created the first two goals, reaching a Europe-high 15 assists in the process. It made him the first Chelsea player to be directly involved in 30 Premier League goals since Didier Drogba and Frank Lampard, they achieved the same feat in the 2009-10 season; and it is an accomplishment that might just be his last meaningful contribution in the league he has made his own since arriving in 2012.

Of course, it doesn’t have to end this way, as Chelsea bring an away goal advantage back to the Bridge in the Europa League semi-final against Eintracht Frankfurt. It is likely that there is one more final to play, one more trophy to lift before he departs. It is only befitting that Chelsea sends him off with one last triumph: a deserved reward for having single-handedly dragged his team to success and glory across the past six campaigns.

There might just be one last piece of silverware with Chelsea for the brilliant Eden Hazard, with the Belgian looking set to swap Stamford Bridge for the Santiago Bernabeu next season. Real Madrid beckons the winger as the allure of Zidane proves too strong for the talismanic No. 10, and Hazard’s departure marks the loss of a player who should rightfully be regarded as a modern-day Premier League great.

But somehow, it doesn’t feel that way.

Somehow, despite two Premier League titles, an FA Cup, a League Cup and an Europa League across seven seasons, there remains the sense that Hazard is underappreciated, the Belgian’s excellence seemingly obscured by a confluence of factors acting against him.

It is difficult to believe that Hazard has only won the PFA Player of the Year once (in 2014-15), and though it was preceded by the PFA Young Player of the Year award, the number of individual honours he has won doesn’t quite do justice to him.

A four-time inclusion in the PFA Premier League Team of the Year seems scant consolation when you factor in just how pivotal Hazard has been for his team since his sophomore year in London, and how remarkably consistent he has been in the seasons since.

But Hazard cannot be reduced to the number of trophies he has won for Chelsea, just as goals are not all that there is to Leo Messi.

There is a sense of danger that Hazard emanates when he gets on the ball, a feeling that defenders turn into spectators, as the winger takes it past them in his path to the goal. The moment when a Chelsea breakaway finds the Belgian in his familiar position on the left wing, it causes the heart to flutter because you instinctively spot the danger associated with that move: The No. 10 gets on the ball and beats three defenders with a flick here and a shimmy there and reaches the box before pulling the trigger or sliding the ball across at the perfect moment to a  teammate in space.

You know the threat, you know it’s coming, but no matter what, you can’t stop it.

That’s Eden Hazard in a nutshell: deadly, unique and unstoppable.

Hazard arrived in England as a widely coveted talent, coming off his final Ligue 1 season with Lille having scored 21 goals in 48 games. The Belgian left a sizeable impression with the French outfit after having achieved a league and cup double in 2011, in addition to becoming the first footballer to be named the UNFP Ligue 1 Player of the Year for two seasons in a row.

For a fresh import from an ‘inferior’ league Hazard had a reasonably good first season in England, recording a hattrick of assists in his home debut against Reading. There were memorable moments when the winger came off the bench to score crucial goals against Sparta Prague in the Champions League group stages and against Manchester United in the quarterfinals of the FA Cup.

Blues legend Frank Lampard broke Bobby Tambling’s goalscoring record from a Hazard assist; and the Belgian was one of the bright spots in a season that saw Roberto Di Matteo sacked in favour of the extremely unpopular Rafael Benitez. Despite the widespread hatred, the Spaniard managed to win the Europa League in an otherwise tumultuous season for the London outfit, and a semblance of stability returned to the club with the second coming of Jose Mourinho.

The Portuguese had declared himself the ‘Happy One’ upon his return to the club, and Mourinho’s arrival marked the beginning of Hazard’s rise as a serious attacking force in the Premier League.

There were no trophies for Chelsea in the 2013-14 campaign but only an indication of what was to come next season, as Hazard announced his true arrival in England with a series of statement performances against Swansea, Liverpool, Hull and Manchester City. A brace in a 4-3 defeat of Sunderland led Mourinho to claim that Hazard had delivered his “best performance of the season”, and it was hard to argue otherwise, as the winger absolutely terrorised Gus Poyet’s side.

The proper Hazard season would not begin till Mourinho’s second year in charge, when Cesc Fabregas, Filipe Luis, Loic Remy and Diego Costa came in to replace the outgoing Frank Lampard, Ashley Cole and David Luiz. The departure of playmaker Juan Mata meant that Hazard finally got his hands on the No. 10 shirt, and it should perhaps have served as a warning to the rest of the league of what was to come from the mazy Belgian.

This was the season where Hazard took and scored a record 15 penalties, and netted a flurry of memorable goals including a rare, unexpected header against Hull City. There was a 2-0 victory against Arsene Wenger’s Arsenal in October, and by the end of November the Blues were six points clear of second-placed Manchester City. Revenge for a 3-5 loss against Tottenham Hotspur in January was exacted with a 2-0 victory against Pochettino’s side in the League Cup final, and Chelsea achieved a 10-point lead at the top following a 1-0 Hazard-inspired victory against a determined Manchester United.

The Belgian also scored the goal that handed Chelsea a first Premier League title since 2010, as the Blues set numerous records which included staying on top of the table for 274 days and suffering only three defeats. Though these would later be broken by Pep Guardiola’s Manchester City yet they remain achievements that are extremely impressive, and at the time Mourinho’s Chelsea was a dominant force led by a bona fide attacking superstar. This was the season when Hazard would finally get the recognition that his talent always merited, as the Belgian recorded a perfect to the season by picking up the PFA, FWA and Premier League POTY triple award.

However, the highs of the 2014-15 campaign would be followed by the disastrous 2015-16 season, as Mourinho’s third-season syndrome kicked in with full effect. An early season spat with popular club doctor Eva Carneiro was a sign of things to come, as Chelsea were hammered by Manchester City and suffered a come-from-behind defeat at the hands of Southampton. By the end of October Chelsea were in a hole having lost 6 out of 11 games, and the defending champions found themselves in an awkward position at 15th in the table.

The situation only worsened as they lost for the ninth time in December, prompting Abramovich to finally sack the Portuguese and replace him with Guus Hiddink on an interim basis. This would also prove to be an abysmal season for Hazard as the winger only managed to record just 4 goals and 4 assists all season, a far cry from the phenomenon of the previous campaign.

The 2016-17 campaign began with Antonio Conte at the helm, and while 3 victories in August ensured a good start for the Italian, defeats to Liverpool and Arsenal forced a tactical rethink.

Chelsea emerged next month with a new 3-4-3 formation with Cahill, Luiz and Azpilicueta forming an impenetrable back-three, with Victor Moses and Marcos Alonso supporting them as the wing-backs in the system. The Blues began dominating as victories were achieved against Leicester, United, Everton, Spurs and City, and a club record of 11 consecutive league wins was smashed as Conte’s men achieved 13 wins on the trot. A Michy Batshuayi goal against West Bromwich on 12th May was enough for Chelsea to secure the Premier League for the second time in three seasons, and Hazard was invaluable as the winger contributed 16 goals and 5 assists in a superb campaign.

Only a sensational N’Golo Kante kept the Belgian from getting his hands on the PFA POTY award that season, but it was undoubtedly Hazard who was the star of the dominant Chelsea side of 2016.

Unfortunately, similar success would not follow the next season due in large part to Conte’s fractious relationship with the board, though Hazard would still contribute 12 goals and 4 goals as Chelsea finished outside the top-4. There would still be some silverware as the Belgian earned and scored a penalty in the FA Cup final against Mourinho’s Manchester United, which also marked Conte’s final game in charge of the Blues.

This season has brought no trophies but Hazard has continued to deliver for the Blues, with the Belgian defying the odds to carry Maurizio Sarri’s striker-less Chelsea to 3rd place in the league.

Despite being played more often than not in a false 9 position Hazard has managed to deliver 16 goals and 15 assists in the league, dealing with an ineffective midfield, sterile football, fan backlash and an absence of offensive firepower along the way. This is not to mention the speculation that has surrounded his future since the beginning of the season, and it is surreal to think that despite such a sizeable output the Belgian was excluded from the PFA Team of the Year.

It is fitting that Hazard is likely to contest the Europa League final, as the Belgian was side-lined with an injury when the Blues won it for the first time. Another final represents the perfect opportunity for the Belgian to sign off with a flourish by once again winning the trophy that he first won all those years ago, and Chelsea owe it to him to win one last cup before he leaves.

The No. 10’s determination to ensure Champions League football at Stamford Bridge next season seems to be his parting gift to fans who have supported him throughout his time at the club, and it is hard to imagine a more perfect swan song for a professional who has consistently given his best for the club.

Few, if any, will begrudge his move to Real Madrid as the Belgian looks to fulfil a childhood dream and add further European glory to an already glittering CV, and as he enters his prime, the winger is only set to become even more potent.

Eden Hazard’s imminent transfer marks the departure of one of the Premier League’s greatest-ever imports, and anyone who argues otherwise has not been paying attention to the wild fluctuations in fortune that Stamford Bridge has undergone in recent years.

Throughout all the turbulence there has only been one constant for the North London outfit, and it is imperative that we enjoy the wonderful Eden Hazard while we still can.