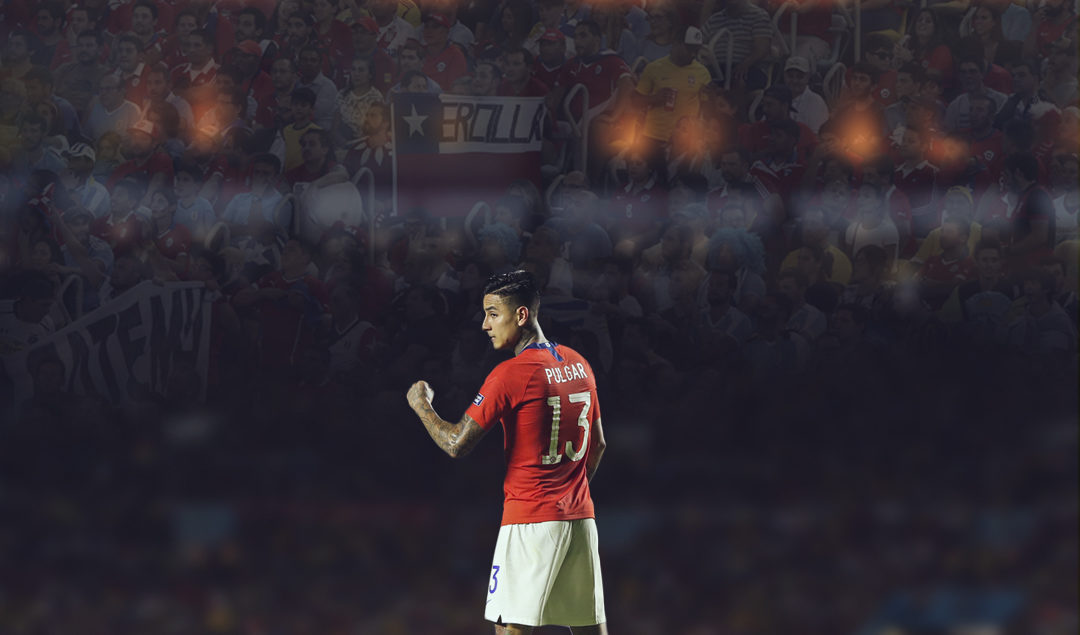 For about a decade, Chile has witnessed a golden generation of footballers representing the country and achieving historical results in the process. Some of these players have been together since the 2007 FIFA Under-20 World Cup and have been fundamental in La Roja winning consecutive Copa America titles in 2015 and 2016 as well as reaching the 2017 Confederations Cup Final.

With midfielders like Arturo Vidal and Charles Aránguiz being 32 and 30 years old respectively and the likes of Matías Fernández and Jorge Valdivia no longer a part of the Chilean squad, the next generation have their chance to prove their worth under Colombian-born coach Reinaldo Rueda.

Defensive midfielder Erick Pulgar earned his first cap for Chile back in January 2015 but now he has become a mainstay in the national team under Rueda and he has also been one of his country’s best performers at the 2019 Copa America.

A determined ball-winner as well as a competent user of the ball, the 25-year-old left his homeland at a young age, but he has slowly progressed into a key player for Italian club Bologna and for his national team.

Born and raised in Antofagasta in northern Chile, he made his senior debut for Deportes Antofagasta in 2011 when the club was in the Chilean Primera B and he remained there until June 2014, when Universidad Católica beat Colo-Colo to his signature and paid the Pumas US400,000 for 70 percent of his contract.

During his early years, he had played as a centre-back, but over time he became a defensive midfield who could contribute with the odd goal. In his solitary campaign with Los Cruzados, he scored eight goals in 40 competitive matches, and when Bologna returned to Serie A after winning in the 2014/15 Serie B play-offs, it made Pulgar one of its summer signings, acquiring him for a reported figure of €2.3 million in August 2015.

The Chilean youngster appeared in the opening seven Serie A fixtures of the 2015/16 season including five stars under Coach Delio Rossi but then his place was eventually taken by Guinean starlet Amadou Diawara. Rossi was replaced by Roberto Donadoni after 10 rounds and placed his faith in Diawara, limiting Pulgar to just 13 league appearances for the campaign.

With the sale of Diawara to Napoli in the summer of 2016, this gave the Chilean midfielder a chance to earn his spot in the starting XI and he appearance 27 times in the league. Ádám Nagy had arrived in place of Diawara so times Pulgar had to play on the left side of the midfield trio to accommodate the Hungarian international.

The first half of the 2018/19 Serie A campaign was one of struggle for Pulgar and his Bologna teammates under new coach Filippo Inzaghi. Languishing in the relegation zone, the Bolognesi played in the 3-5-2 formation and the football played was dour, defensive, and very ineffective.

During Inzaghi’s tenure, the Chilean midfielder was sent-off in the 1-0 defeat away to Genoa and he was involved in just one goal, providing an assist from a free-kick for Danilo in the Felsinei’s 3-2 defeat away to Napoli.

After a 4-0 defeat at home to cellar-dwellers Frosinone in Round 21, Bologna sacked Inzaghi and replaced him with Siniša Mihajlović, who decided to switch to the 4-2-3-1 formation with Pulgar as part of the central duo with captain Blerim Džemaili.

His ability to win the ball back for them was still an important facet of his game but he started to display more skill and composure under the former AC Milan and Torino coach and also demonstrate the ability to launch attacks, essentially operating as a deep-lying playmaker for the Rossoblú as opposed to just being a holding midfielder.

Pulgar helped Bologna survive relegation and he finished the 2018/19 with six goals as well as two assists in 28 Serie A matches, which included a spell of scoring five penalties in as many matches.

That spell concluded when Bologna defeated Chievo 3-0 in Round 31 and the Chilean successfully converted two spot kicks in that match, earning the praise from his coach, who was a free-kick specialist during his illustrious playing career and shares the record with Andrea Pirlo with the most free-kick goals in Serie A with 28.

“It’s never easy to take penalties, but Pulgar has taken five out of five in the last five games,” Mihajlović said to Sky Sport Italia after the victory.

“It’s also thanks to the team, who are letting many players get into the penalty area. I missed more penalties than free kicks, so he certainly takes them better than me!”

Arguably the most bizarre achievement of his season was in the 3-2 victory against Torino in Round 28, when he became the first player in Serie A since December 1996 to score goal for his team and an own goal in one match. Cagliari defender Giuseppe Pancaro managed to do that in a 1-1 draw against Reggiana (now known as Reggio Audace) in the 1996/97 campaign.

That was not enough of a blemish on the Pulgar’s season though, as he was selected to represent his country at the Copa America. Although he was a part of the squad when La Roja won in 2016, he made just one appearance in the tournament when they won 2-0 against Colombia in the semi-finals, but the 2019 edition has presented him with the opportunity to establish himself as a protagonist.

During the tournament, the 25-year-old has gained attention for his ability to retrieve the ball as well as control the play, and he also scored his first goal for Chile in its first Group C fixture, which the South Americans won 4-0 against Japan. His ability to remain cool during penalties was evident when Chile’s quarter-final against Colombia ended 0-0 after 90 minutes and converted one of the spot kicks in the 5-4 victory.

His form at the tournament has attracted interest from Spanish club Sevilla, English side Arsenal, and Italian giants AC Milan and Inter. With a low buyout clause of €12 million, he could be a great addition to any midfield that needs a player that can win the ball, distribute it well, and also pose a threat from set-pieces.

A chance to sign a talented midfielder at an affordable price has been presented but even if Bologna hold onto Pulgar, the Italian team will continue to witness the evolution of one of Chile’s most complete midfielders at the moment.