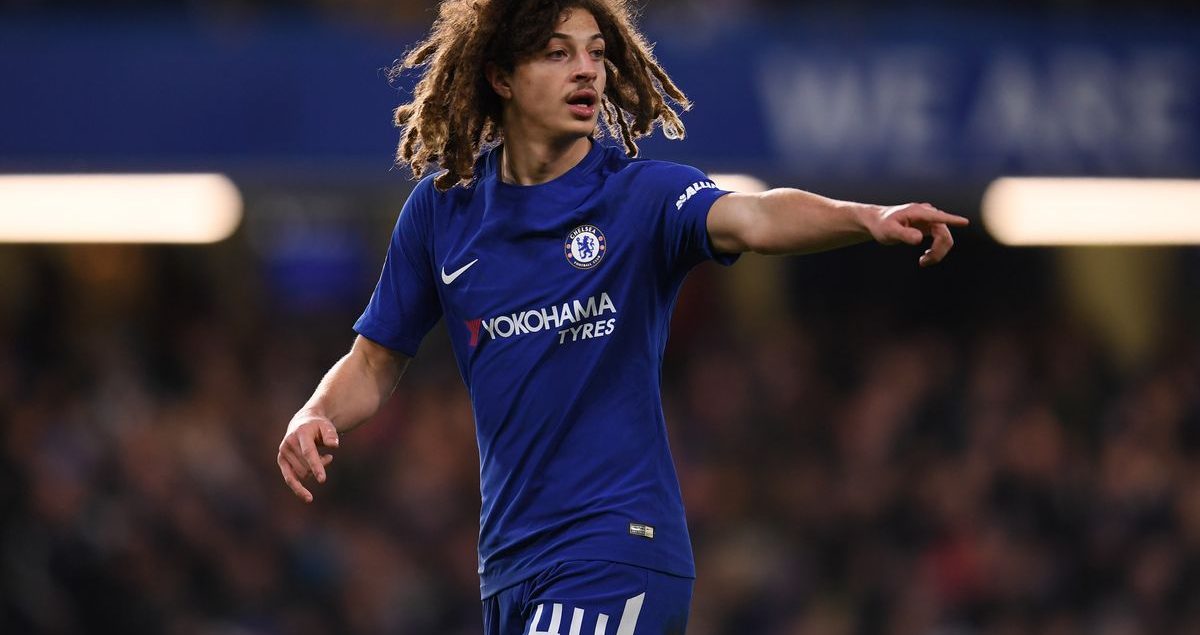 Ethan Kwame Colm Raymond Ampadu (his full name, not an anagram) was born in Exeter, England on September 14th, 2000. He was born into a footballing family, being the son of former Republic of Ireland U21 International footballer Kwame Ampadu, now a coach at Arsenal’s U18 side, and a Welsh-born mother.

Ampadu joined the Exeter City youth academy at a young age through his father, who had previously held a familiar role within the club. At the tender age of 14, Ethan made his first appearance for the U18 side, a mere four years above his pay grade at the time. Shortly after, at 15 years old, 10 months and 26 days, Newcastle’s St James Park welcomed the young prodigy, in an EFL Cup tie against Brentford on August 9th, 2016. Ampadu would show his endurance at a young age, with a fine performance and full completion of the 120 minutes in a 1-0 victory for Exeter. The budding Welshman was beginning to make tracks into his father’s footsteps. Arsenal legend Cliff Bastin was the club’s youngest ever player, until Ampadu himself made this appearance for the first team, breaking an 87-year-old record in the process; he was also named Man of the Match in this game. Just seven days later, Ampadu would make his league debut in a 1-0 defeat against Crawley Town in League Two, the lowest professional league in England.

Ampadu made 13 appearances for Exeter’s first team in the 2016/17 season, at a time where numerous top clubs around the country began to take notice of him. The likes of Arsenal, Manchester United and Chelsea began to pursue the signature of the young starlet. Exeter had offered the player a scholarship contract, in an attempt to keep their prized possession, but Ethan was keen to talk to other clubs. On July 1st, 2017, it was announced that Chelsea, fresh off their Premier League triumph, had won the race for Ampadu.

The club negotiated a compensation deal for the 16-year-old, following league regulations in signing a player under the age of 24 years old. A statement was imminently released by Exeter at the time, stating they hoped to agree a fee without the need of going to a tribunal with Chelsea.

A statement from at the time Exeter manager Paul Tisdale also followed, in which he stated: “Everyone at Exeter City fully supports Ethan’s decision to sign for Chelsea,” said Tisdale. “He had many options available to him and has decided that Chelsea provides him with the best opportunity to develop the next step of his career. We wish him the very best of luck.”

The signing of the youngster was seemingly a smooth transition, despite the fact that in recent months it had been reported that a certain Sir Alex Ferguson of Manchester United believed his club were on the brink of signing Ethan Ampadu, when he was just 12 years old. Ferguson took note of Ampadu’s potential when Exeter U-13’s travelled to United in 2013 for a junior tournament, where former Exeter academy coach Simon Hayward confirmed, “Ethan had played as a center defender, a central midfielder and a center forward at different times in the game, and, in my opinion, he was the best player on the pitch, no matter what position he played in.”

However, on November 17th of the same year, Exeter City chairman Julian Tagg said that, whilst there was still a positive relationship between the two clubs, there was a massive “disparity” in each club’s valuation of the player. A tribunal was soon on the horizon. On April 20th, 2018, it was widely reported by numerous media outlets that the tribunal was concluded, and Chelsea were ordered to pay up to £2.5 million for Ampadu’s services, much to the disappointment of Exeter City. It was evident the League Two club were expecting a larger sum for their academy prospect, even if this reported fee would be a club record fee, Tisdale was reported saying the ruling “sends the wrong message” to clubs producing home-grown players. Further details eventually spilled, and Exeter were guaranteed to receive £1.3 million based on a transfer fee plus the international and first-team appearances Ampadu had already made, alongside an installed 20% sell-on fee should Ampadu leave Stamford Bridge eventually.

On the field, Ampadu began his Chelsea career in the club’s academy sides, featuring predominantly for the U23 side, and with his strong performances at the youth level, it wouldn’t be long before the first-team would come calling. On September 20th, 2017, just 3 months after his official signing, Chelsea would hand Ampadu his maiden first-team appearance, coming on for Cesc Fábregas in another EFL Cup third round match against Nottingham Forest, in the 55th minute of the tie. Ampadu became the first player born in the 2000’s to play for Chelsea’s first team, as well as the youngest player to debut for the club in over ten years, at the age of 17 years and six days old.

A couple of months would tick by, then a Premier League game against newcomers Huddersfield Town would provide an opportunity for the teenager to make his top-flight debut, entering the fray in the 80th minute. For the reminder of the season, Ampadu would flicker between the academy and first-team side, subsequently making 9 appearances in the Professional Development League in the 2017-18 season, one appearance in the league, three in the FA Cup, and two in the League Cup.

Having been eligible to represent England, Republic of Ireland, Ghana and Wales, Ethan had a choice to make on whose international shirt he would don for the rest of his career. Recently, it was revealed that England had turned down the opportunity to secure Ampadu’s services before he committed his international career to Wales.

Tisdale told BBC 5Live “I haven’t seen a 14-year-old as good as Ethan. I actually phoned England to make it known that.” He also revealed the response he heard back, “I was told they had 12 players better. They were aware of Ethan and I said well, this chap just thinks correctly, he acts correctly, he makes good decisions, and I was told that he takes too few touches.” This was all despite the fact he had already made an appearance for the Three Lions U16 squad in 2015.

In 2016, he swiftly switched alliances, turning out for Wales U17’s 5 times, and also the Welsh U19 team 3 times. In May 2017, at the age of 16, Ampadu was called into the senior Wales squad ahead of their 2018 World Cup qualifier against Serbia. He would return to the squad in November, eventually making his debut at the Stade de France, coming on as a 63rd minute substitute for Joe Ledley in a 2-0 loss to the eventual World Cup champions. His first competitive start for Wales would come in the 4-1 demolition of Republic of Ireland on September 6th, playing 67 minutes in a mature performance in the holding midfield role for the Dragons. Ampadu was majestic in his build up play, shifting the ball elegantly across the turf, even notching his first assist with a perfectly-weighted through ball to Arsenal’s Aaron Ramsey. The standing ovation when his number was raised on the fourth-officials board, and the partisan reactions on social media symbolize just how impressive the youngster was.

Ethan Ampadu was beginning to make a statement to all parties he delivered his services for. With his foot firmly in the door on the international stage, and more hype surrounding his club future, Chelsea acted swiftly. On September 19th of this year, it was announced that Ampadu had agreed a fresh new five-year contract with Chelsea, seeing him remain in SW6 until 2023, a warranted reward for his continuing impression in the football world.

What’s next for this generational talent? Setting his sight on breaking into the Chelsea first-team under new coach Maurizio Sarri, who has had kind words to say to him, dubbing him, alongside Ruben Loftus-Cheek and Callum Hudson-Odoi, the “future of the club.” The question now is, after Ampadu’s marvelous performance in the holding-midfield role for his national side, where will he fit in at Chelsea? It is believed Sarri still sees Ampadu as a center-back, and this is where he will feature for the Blues when the opportunity arises. However, Ampadu has done himself no harm by showing his manager, and everyone around the world how adept he is in both these central positions. Do not be surprised when you see an Ampadu #44 shirt amongst the starting eleven of Chelsea FC in the coming months; the Welsh Dragon is certainly making some noise.