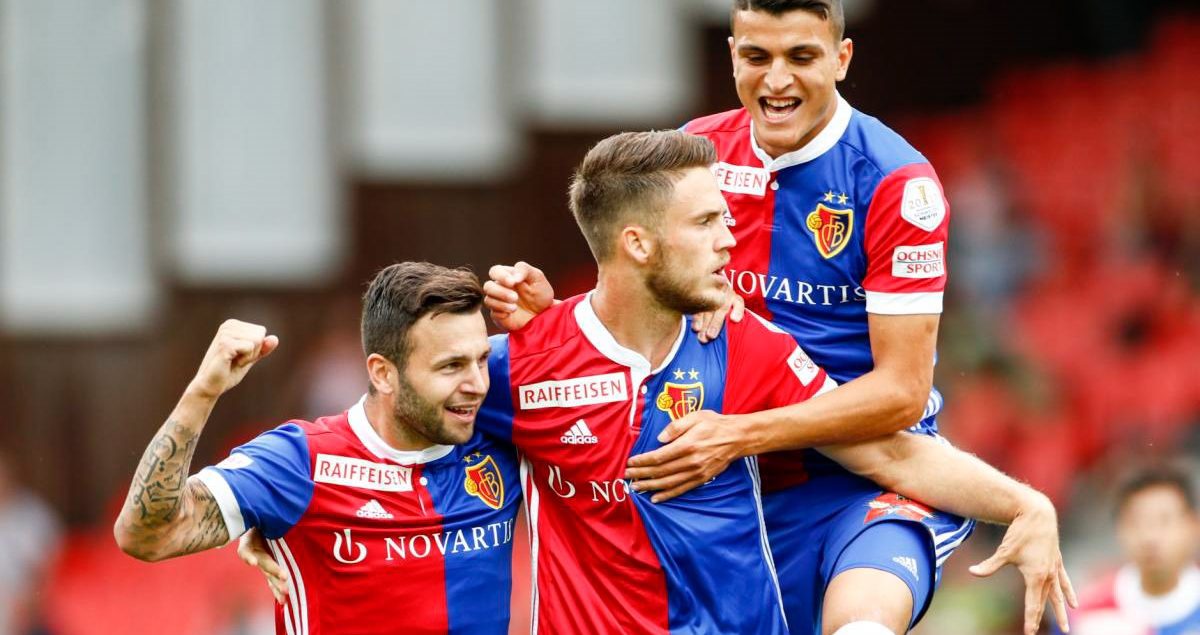 In the summer, Basel had to make changes on top, as the chairman, the director of football and the whole board had to be replaced. New director of football Marco Streller decided to sack manager Urs Fischer and replace him with former Swiss international and Basel U21 manager Raphael Wicky. The team largely stayed intact and they only had to compensate the loss of top goalscorer Seydou Doumbia and Marc Janko. They did so with Ricky van Wolfswinkel and Albian Ajeti.

But on match day 2, the team was shook to its core as captain and club legend Matias Delgado announced his immediate retirement from football. At first, this didn’t show on the pitch, but after 4 winless games, the team and Wicky were questioned by the media and parts of the fanbase. Especially since their competitors Young Boys started exceptionally well.

The turnaround of the season came in the Champions League. After a defeat at Old Trafford on match day one, Basel smashed Benfica at home 5-0. Yes, five nil. The public perception changed for the better and the team started to believe in themselves again.

In the league, Basel stayed unbeaten until the winter break. Even better, they managed to win away against CSKA Moscow and famously at home against Manchester United with a last minute winner by Michael Lang. After a loss to CSKA at home and another win in Lisbon, Basel came in second of the group and were qualified for the round of the last 16, defying expectations once again.

During the winter break, the club lost two of its star players in Renato Steffen (Wolfsburg) and Manuel Akanji (Dortmund). They were replaced by former FCB-players Valentin Stocker, Fabian Frei and Samuele Campo. They also loaned Leo Lacroix from St. Etienne to have more flexibility at the back.

On paper, the team looks a bit stronger than before those transfers. But when you make this many changes, it usually takes time to gel together. Something that was evident in their first match after the winter break, when they lost to Lugano at home. At the moment of writing, Basel is five points behind Young Boys, who are chasing their first league title since 1986.

Under Raphael Wicky, Basel plays a more high tempo football than under his predecessor. They press high up the pitch in order to regain possession as early as possible. While Wicky mainly played a 4-2-3-1 shape in the league, he changed it to a 3-4-3 in the Champions League. The goal was to be more flexible while also having men forward for quick counter attacks. This proved to be a successful formula as the requirements of the league and the Champions League are different. The wing backs are the most important players in Wicky’s 3-4-3 as they’re running along the sidelines often and provide support to either the forwards or the centre-backs.

The danger men for Basel are Mohamed Elyounoussi, a technically good attacking midfielder, Ricky van Wolfswinkel, a proven goalscorer and Michael Lang, a full back who’s bombing forward often and is a danger in the box. Lang famously scored seven goals in a spell of only 5 games in late November. Another notable player is Dimitri Oberlin, a 20-year old Swiss forward who came in on loan from Salzburg. He scored four goals and assisted on another in the Champions League. He has tons of speed, which makes him the perfect man for Wicky’s 3-4-3 counter tactic.

In terms of young talent, besides Oberlin, Raoul Petretta stands out. He has played his first minutes last season under Urs Fischer, but was trusted into the starting left back role by Wicky after some shaky performances by Blas Riveros. At first, Petretta was a bit too shy when going forward, but the more he played the more he gained conficende. One of his highlights was an assist to Michael Lang’s game winner against United. Petretta has been called up to Italy’s U21 national team, but has not played there yet.

Basel, being a well-respected hotbed for home grown talent and a stepping stone for foreign youngsters, also has some talented players in their squad who haven’t played much for the first team yet. Afimico Pululu (19) and Noah Okafor (17) stand out. Basel topped the group in the UEFA Youth League, with these two contributing massively. Pululu scored four goals and assisted on 3, while Okafor marked twice and played the final ball to four more goals. Those are two players to look out for in the next few years.

As the team already exceeded expectations in the Champions League, they can go into the two games against Manchester City with little pressure. But the current form has to be questioned. Their results in the winter friendlies were mixed. Solid at the back, but not efficient upfront. This was evident when they lost to Lugano. Some players lack match practice at a competitive level. Valentin Stocker, for example, had not played a competitive match since early November, before starting against Lugano. He is expected to become the key player he was when he left FCB for Hertha Berlin.

All in all, Manchester City are heavy favorites. But Basel has mounted challenges deemed too big for them before.