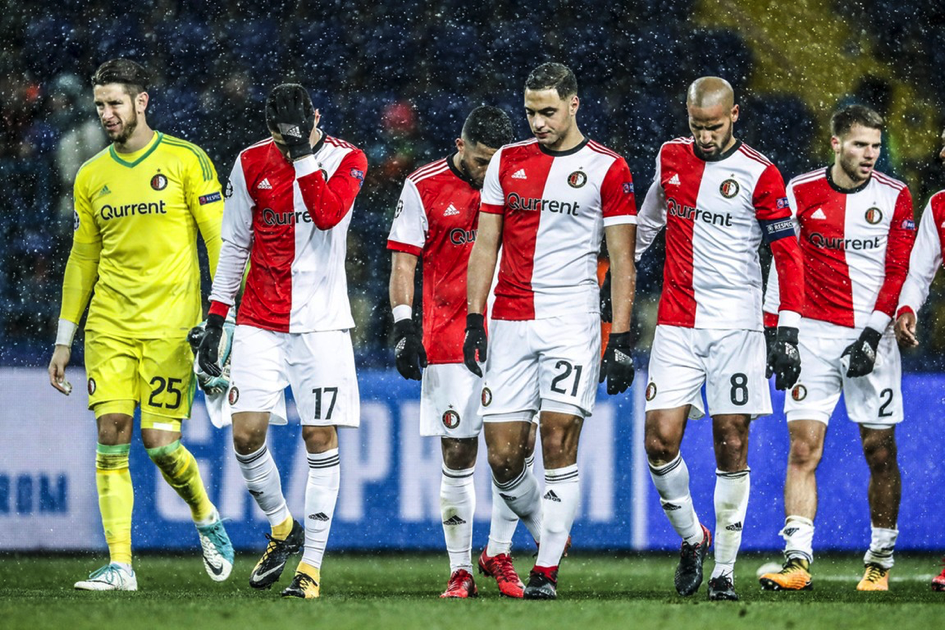 On June 6, 1944, the Allies invaded Normandy. On November 9, 1989, the Berlin Wall fell down. And on May 14, 2017, Feyenoord finally won the league.
After years of desperation, failure, and near bankruptcy, Feyenoord managed to win their first league title of the century, in one of the most hectic and intense seasons in the club’s history. But before they could even celebrate, they had to rebuild. Club legend Dirk Kuyt retired, and some of the key players left the club. Feyenoord made huge investments in hopes of replenishing the squad and replicating last season’s success, but everything changed drastically. Rotterdam went from heaven to hell in less than 6 months. Today, they’re out of Europe, sitting 5th in the league, and the only thing left playing for is the domestic cup. What happened? What’s changed? And most importantly: how do they prepare for next season?

For starters: the desperation regarding the club’s situation is quite exaggerated and needless. Feyenoord just need to improve in a couple areas, and it’s key to keep hold of their star players in order to rebuild. But I will get back to that.

The first question that comes to mind when analysing Feyenoord: why is there such a big difference from this season to last season? Sure, they’ve had to deal with lots of injuries, but that hasn’t been the main issue. It also comes down to losing some key players, and some key players losing form.
There are two widely shared beliefs circulating amongst the media and fans, opinions that are inaccurate and insufficient in explaining Feyenoord’s downturn in form.

Yes, he was crucial at times last year, but he also had plenty of terrible matches. And yes, he was a great captain: to have someone like him to bring on as an impact sub is a massive advantage, especially when you’re challenging for the title. But to suggest Kuyt would’ve prevented this nightmarish season is absolutely nonsense. This suggestion is mostly based on his mentality. His dedication and ‘willingness to win’ is supposed to be key in those hard matches. Truth is: he couldn’t keep up with the level anymore. And let’s not forget: he was a starter when we lost a club record 7 games in a row. I love him, but he wouldn’t be the answer to our woes.

How often do you read people wanting to fall back to last season? People are calling for Eric Botteghin back in the team. And no matter how much I love our Brazilian beast: he isn’t the solution to our problems. Don’t get me wrong, I get the sentiments. It makes sense: we want to play like last season again, so we have to try to copy that team as much as possible. But the truth is, Feyenoord have been solid defensively this season. We’ve conceded 27 goals in 25 league matches, and that’s more than decent. We’ve managed just fine without Botteghin. Sven van Beek is nearing his old level again, and even Renato Tapia, despite his errors, has been solid. So no, there’s no need to go back to last season’s defence.

But what has been the source of Feyenoord’s problems? There are four huge differences with last season.

Brad Jones
The 35-year old goalkeeper continues to prove last season was an one-time wonder. His confidence, composure and big saves are nowhere to be found. I will never understand why Feyenoord allowed Vermeer to leave on loan to Club Brugge. It’s an inexcusable mistake by Giovanni van Bronckhorst to prefer Jones over the 32-year old Dutch international. Last season, Jones won Feyenoord matches. This season he’s costed them matches. If Feyenoord want to improve next year, they either have to play Vermeer, or buy another goalkeeper.

Rightback
Everyone knew what an influence Rick Karsdorp had on the team. His creativity made him an extra option in attack, and his incredible pace often made up for his absence in defense. His departure was inevitable, but Van Geel failed miserably to replace him. After he left for Roma, Feyenoord found themselves in that same league for his replacement: Feyenoord got Kevin Diks on loan. Diks has been a resounding flop: after a terrible debut in the super cup, he’s barely improved.

Diks doesn’t have Karsdorp’s drive going forwardd, his pace, or his determination. Luckily he’ll be gone after this year, but the alternatives aren’t all that either. Nieuwkoop is decent, but he would be more suited as backup. Decent isn’t good enough.

St. Juste has been decent at RB, but he doesn’t have that final ball or playmaking ability that Karsdorp had. St. Juste is much more of a central defender than a wingback, so that’s what he should focus on. Signing an RB should be one of Feyenoord’s top priority’s this summer.

The playmaker had the season of his life in Feyenoord’s title winning campaign. He bagged 14 goals & 10 assists in the league, won the silver shoe, and he got called up for the Dutch national team. In the summer, he got an offer from Swansea City, but he refused, and instead renewed his contract. Everything was set for him to fire up the Eredivisie again, and make name for himself in the Champions League. But he didn’t.
He’s been struggling all season. His passes through the lines, his goals, his linkup play, his runs in behind: it’s all vanished. And nothing suggests it’s coming back anytime soon. Feyenoord lacked creativity last year, and with Toornstra losing his form, they’re lacking it big time.
Luckily, they’ve already got the solution: Robin van Persie. Sure, he’s not the machine he was in London and Manchester anymore. And yes, he’s become injury prone, but he adds that extra dimension Feyenoord need so desperately. He’s capable of things no one in the squad is.
However, due to RvP’s fitness, he won’t be able to play multiple games a week, so I’m not a fan of selling Toornstra. He’s had the reputation of ‘the perfect 12th man’, and Feyenoord need to keep making use of that. He won’t reach his 16/17 form again, but once he rediscovers some form, it will be more than enough for a squad player.

Left wing
After scoring the winning goal in the cup final in his first season in Rotterdam, Eljero Elia closed his Feyenoord chapter with the title. I’m not sure people understand how vital Elia was for that team. He, like RvP now, he had special qualities no one else in the team has.
He’s an incredibly explosive player. He’s quick, strong, has a great technique, and is an amazing dribbler. He loves himself a goal, but he also doesn’t shy back from his defensive duties. But after two memorable years, he left to join Turkish side Başakşehir.

Eljero Elia’s departure was to be expected, so you’d think Feyenoord would have enough time to find a good successor to fill the void. Strangely, they didn’t. Whereas rivals PSV signed starboy Hirving Lozano, Feyenoord decided to approach ex-Feyenoorder Jean-Paul Boëtius. Feyenoord decided to enter the Champions League and their title defence with a player who has been deemed not good enough for KRC Genk and FC Basel.
Despite a decent start, Boëtius fell back again to the level with which he left Feyenoord in 2014.
But he isn’t the only option for the left wing: they also brought in Sam Larsson. After setting Heerenveen alight, many were expecting him to do the same to Feyenoord. But he’s shown no signs of the things he was capable of for Heerenveen.

Larsson brought everyone’s hopes up: he’s supposed to be good in tight spaces. He’s supposed to be able to score from free kicks, to outplay his direct opponent like Elia could. But none of that has happened yet. Not once has Larsson carried this Feyenoord side. Not once has he absolutely dominated a match. He played well against non-league side AVV Swift, but that’s about it. At times he’s shown glimpses of quality, but that’s not enough.

Feyenoord now have 3 options for the left wing: Boëtius, Larsson and Bilal. I’d give Larsson the benefit of the doubt. He might improve in the coming years, and he’s one of the few creative players at Feyenoord.

But if they manage to sell one of Boëtius or Bilal, they should really look into signing a new left winger. Someone with depth in their play, someone who can make runs in behind, as well as beat his direct opponent.

Important players
After these changes are successfully made, it’s essential that Feyenoord keep hold of their most important players: Karim El Ahmadi, Nicolai Jorgensen & Steven Berghuis. Selling them will harm the team, but not because they’re irreplaceable. Sure, Beghuis and Jorgensen are important, but they’re not crucial. The only reason I’m anxious for their departures is because I have no confidence in the board whatsoever to replace them. Every offer on everyone above 15 million should be seriously considered, but it won’t be for the better of the team.

The boss
And last but not least: the manager. I’ve never been a fan of Van Bronckhorst. His appointment has never been based on his qualities, but on his name. And despite him winning trophies, he doesn’t seem to contradict that opinion. Some are saying Gio doesn’t deserve the stick he’s getting: he won the league after all. But let’s look at the facts. His first season, the aim was to win the league. He finished 3rd, and lost a club record 7 games In a row. Any other manager would’ve gotten fired. But somehow, he survived.

His second season was the famous league-winning season. An incredible performance. Everything fell in its place, and everyone involved deserves credit for that. Including Gio.

But then, his third season.   A season full of disappointments and frustration. No matter how good last season was, it seems clear that crises are the standard under Gio, and success the exception. Gio has been relying on luck and individuals to save his job, but there’s limits to that. Feyenoord are playing awfully. And Gio either fails to recognise the problems, or he doesn’t know how to fix them. And I don’t know what’s more worrying.

I’m thankful for that season. I’m thankful that Feyenoord fans, myself included, finally got to celebrate a league title again. I’m thankful that I’ve had the opportunity to watch Feyenoord in the group stages of the Champions League. but it’s time to go. Gio deserves to leave with dignity, so he shouldn’t be fired midway through the season. But he does have to leave in the summer.

And then what? If I were Feyenoord, I would approach Fred Rutten again. He’s gotten a lot of stick for his performances at Feyenoord, but that’s harsh on him. He played some of the best football at Feyenoord in about a decade. he even topped his Europa league group, above Sevilla. After that, Feyenoord were a tough opponent for AS Roma. A great achievement, considering he had players like Immers, Kazim and Elvis Manu. This squad is miles better than that squad. Fred Rutten would work wonders with it.

This season has been a disaster. But there’s still perspective for next season. Feyenoord just need a couple changes, and they’re back where they should be next season: challenging for the league title.