With football clubs constantly competing for the most retweets, the most views, and the most prestige on social media, the transfer announcement has gone from a pleasant formality to a desperately expected end to a transfer saga.

The method varies: Real Madrid keeps it simple with their ‘Comunicado Oficial,’ PSG keeps it simple on social media, while lighting up the Eiffel Tower in red and blue, and other clubs mix it up between bland announcement and over-the-top signing video.

Over the summer, AS Roma parodied the transfer trend with more and more extravagant announcement videos in Monchi’s first summer in Italy: Lorenzo Pellegrini playing video games, Aleksandr Kolarov scoffing at an elaborately drawn out plot, while Gregoire Defrel was apparently the subject of a rejected Michael Bay film. 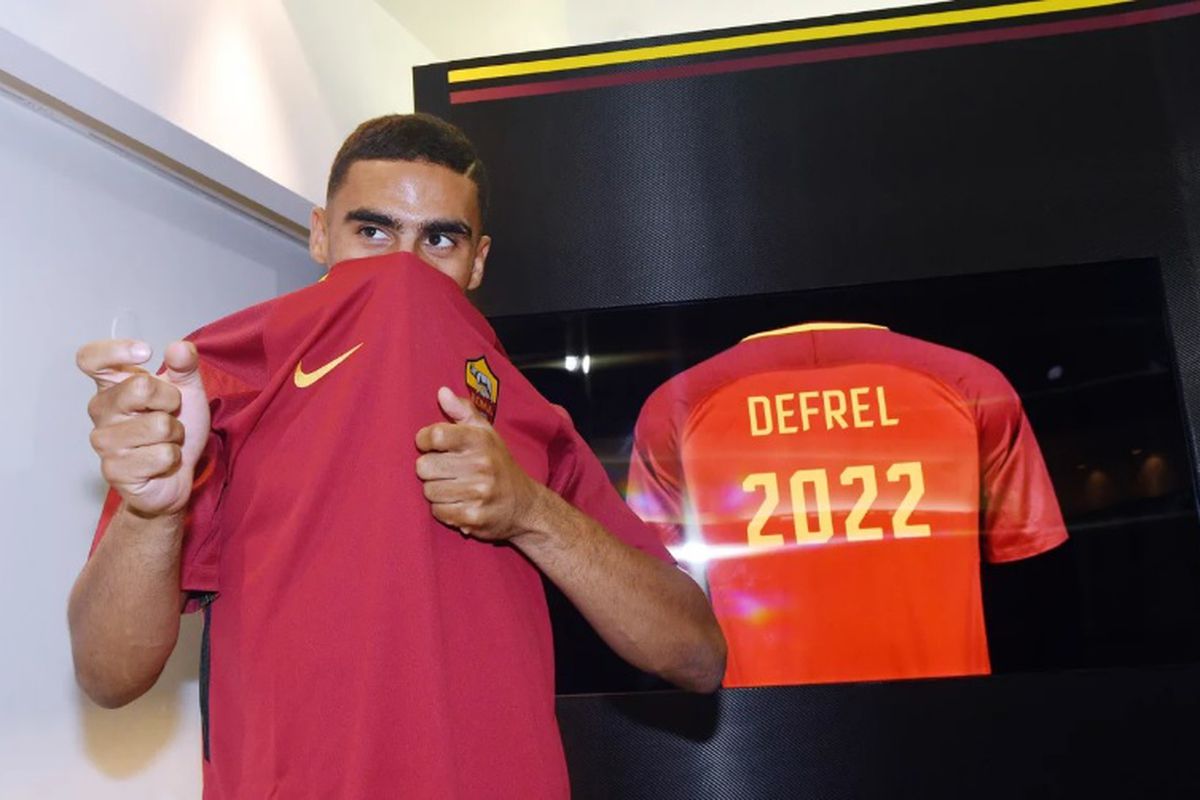 The point is, it’s more than just an announcement, it’s an extravagant culmination, nay, celebration, of a transfer, and in the ever-inflating transfer market, social media teams deserve to put some panache into the announcement videos given the incredulous fees spent. Manchester United have noticed the trend, and picked it up, too.

After announcing their signings in a standard style, United decided to go the Hollywood route in the summer of 2016 after breaking the world transfer record on Paul Pogba. Popular grime artist Stormzy and the French midfielder teamed up for a music video, before Stormzy, not Pogba, turned around at the end and revealed a Pogba United shirt.

The next summer, Romelu Lukaku and Pogba chatted in French at a cozy Los Angeles pool, and announced Lukaku’s transfer to United. The Pogba announcement video was not to be topped, at least not yet.

As Alexis Sánchez’s contract winded down, it was no secret that Pep Guardiola had a strong desire to reunite with the Chilean. Manchester City pursued the Chilean in the dying weeks of the window, but on deadline day, after a jam-packed window that saw City break the world record for a defender (twice), as well as a bevy of top-quality purchases, the deal fell through. Nonetheless, it seemed City’s interest continued, as the Citizens focused on a deal for January, and, at the very least, an inevitable free transfer in the summer.

Nonetheless, suddenly, out of nowhere, United overtook City in the race for Alexis, and this week, they signed him. It was a fascinating saga that deserved a fascinating introduction, and United’s social media team did not disappoint.

Here’s 5 reasons why Manchester United’s signing video is the video all clubs should aspire to make:

He puts on the shirt, yet the director does not fully reveal the eyes, and obscures the face with shadow. There’s a silhouetted coiffure in a tunnel, and then….BOOM!

2. Black and white contrast. We start off with the white ivories separating the in-focus fingers from the black keys, and then move to a darkened frame (navy blue joggers and olive green jacket) contrasted with glimmering splotches of light, both from a back and a front angle. Then, a second-long, yet prominent focus on the Manchester United badge on the shorts, before a series of shots of Alexis contrasting varying degrees of light.

Halfway through, as a ray of light, which separates the top of the frame from the bottom, illuminates both Alexis’ chest and the 7 shirt he holds, the pattern continues. As he dons the jersey, half of the Chevrolet logo is visible, but the United crest is clearly the star of the frame, brightly illuminated amidst a sea of dark.

Then, the dark back of Alexis’ head makes his way through the tunnel, and in a dark, nighttime stage only available at the Theatre of Dreams, the lights in the background shine brightly upon Alexis, now, finally, in full focus in the center of the picture.

With the signing “revealed,” we see the dark piano border Alexis’ bright red 7 jersey, as beams of red are cast upon the periphery. Alexis enjoys his first appearance as a Red Devil in Old Trafford a little more, and then, we see a brightened profile view of Alexis’ face, before he takes a deep breath and gets up: it’s time to get to business.

3. The light at the end of the tunnel. After setting the Premier League alight last season, Alexis lost interest after a move to City fell through, and quite frankly, was amongst Arsenal’s worse performers this seasons more often than their best. Arsène Wenger betted on Chile qualifying for the World Cup to keep him motivated, but they crashed out of qualifying, and so did Alexis’ morale.

He needed an escape, and while City certainly seemed like the only option for months, here he is, in the red side of Manchester. So, considering the fact that he was linked to City for so long, the goal of United needed to be: let’s make it seem like this was always his long-awaited destiny.

First, he passes by the dressing room (again, highlighted by the black and white contrast), and solemnly, if not wistfully, looks at Daley Blind and Chris Smalling’s jerseys, two players who may very well be playing their final season at Old Trafford. Then, after unfurling his new jersey, he holds it straight for a moment, with reverence, pride, and a long-awaited gratitude for his new destination.

Around the halfway point of the video, he is, quite literally, walking towards the light at the end of the tunnel, as the director moves ever so closely to fully revealing the signing. While exhaling the frigid Manchester air, Alexis looks around the magnificent stadium in awe of its grandeur. Then, after a brief interruption on the piano, we return to Alexis in the stadium, except he’s no longer speculating and gazing in awe.

This time around, the moment has sunk in. He breaks into a wide grin, cherishing the moment, gazing up at the stars (oh wait, those are the lights), and suddenly, flexing and raising up his arms, perhaps as an indication of relief or strength. It’s the final frame now. Alexis finishes the song, lifts up and flicks his wrists, before turning around with a commanding gaze. The gaze says, “You wanted a show, right? Well, here’s your show.”

4. The music. How many clubs will include music in a signing video, let alone the club’s long-lasting chant, let alone have the player, whom, prior to the video, it was unbeknownst to the general public that he even knew how to play the piano, play the song? It’s a theme brimming with audacity and originality, and the directors of the video get it spot on. We start with a light, solemn chord, then, a slightly louder one. Alexis opens the door, and the chords to vibrate, an echo that heightens with the whir of the Old Trafford faithful, which seems to trickle out as if someone had just opened a door to the stadium. The music reaches what was then its highest point as Alexis makes his way through the tunnel, as the sound of Old Trafford becomes even more audible. In a split-second, as the background switches from the tunnel to Old Trafford itself, we hear the roar of the United faithful that has made the Theatre of Dreams one of the most magical venues of all of football. In perfect sync with the piano, the chorus, which sounds like a professional church choir, erupts. “Glory, Glory, Man United.” The chorus booms, and the piano and other audio tools follow suit. As Alexis’ arms reach for the sky, so does the music. He throws his hands up after finishing the song on the piano, but the roaring boom of the crowd stays for a moment. They’ve been waiting on this moment for a while.

The statement of intent. If the Carlos Tevez signing signaled the awakening of United’s noisy neighbors, perhaps this is the reverse, the conclusion of the cycle, the end of the rainbow. Since Sir Alex Ferguson’s retirement, Manchester United have finished in the top four just once, while City have gone on to win one, and what will probably be two in a few months, Premier League titles. City have finished above United every season since Ferguson’s retirement in 2013, and they’ve done it with better football too. United have gone through three coaches in the time being, and while the PSG links have popped up now and again, there is the hope that the third (José Mourinho) could be the charm. At the moment, Manchester City are twelve points ahead of United, but at the moment, Alexis Sánchez is a Manchester United player. Will they have to pay astronomical wages for him? Yes, as is the case for a world class player; doubly so when the player’s contract is expiring. They managed to get rid of a player rotting in the reserves (Henrikh Mkhitaryan), swapping him and his wages for Alexis, at no extra cost. This is more than just a consolation victory for United: this was intelligent and ruthless negotiating and planning, which saw United pop out of nowhere to sign one of the best players in football, who plays a role the Red Devils are in desperate need of (winger) for zilch. (plus Mkhitaryan). With the transfer announcement, United’s social media and/or photography team sought to replicate what this transfer was all about: reminding Manchester United what they’re made of. From the powerful build up of “Glory Glory Man United,” to the magical scenery of the dressing room, to the ethereal, heavenly set up of Old Trafford in the background, the video echoed its message loud and clear: We’re Man United, and we’ll never die.