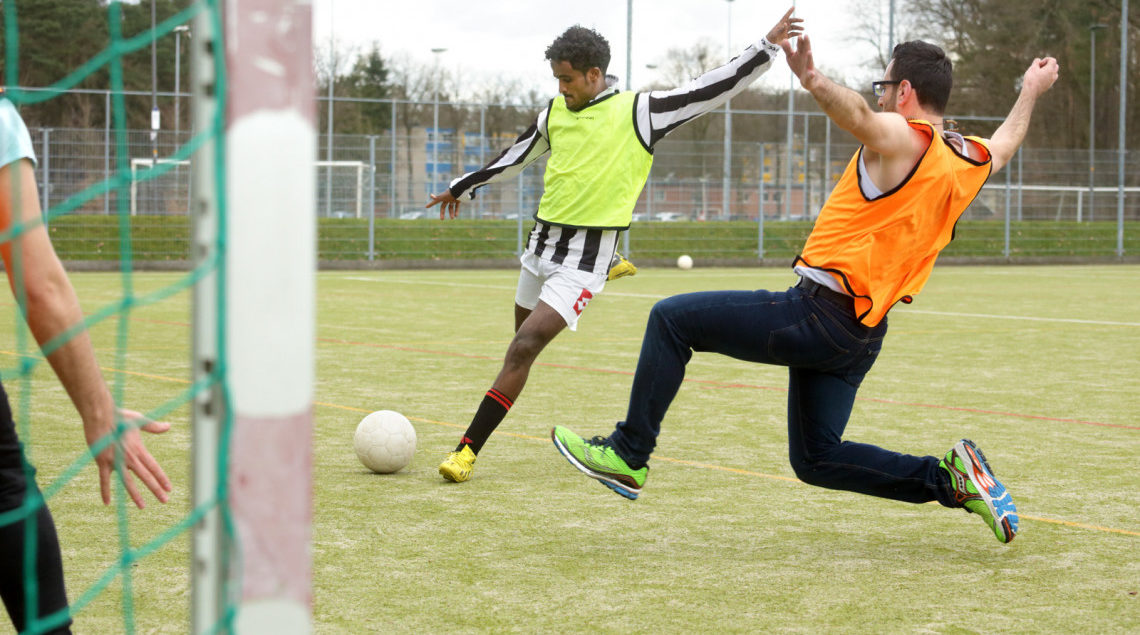 Football makes a huge difference to the lives of asylum seekers. Alongside the feelings of joy and passion that are created whilst playing the sport, joining a football team helps to foster a sense of belonging, and adds routine and familiarity to lives that are often empty and dominated by feelings of insecurity.

Asylum seekers have often dealt with immensely difficult and distressing living circumstances. These include harrowing pre-migration experiences, such as the loss of loved ones, the persistent threat of persecution and physical torture. In addition to this, some are traumatised by the situations they lived through whilst fleeing their countries; the journey one embarks on in order to seek asylum is often incredibly dangerous.

Post-migration issues must also be taken into account, as many asylum seekers remain in need of suitable and proper housing, while others deal with problems such as separation from families and severe destitution. The opportunity to participate in football offers some relief from the number of difficulties that asylum seekers frequently experience. The ability to make connections and build friendships with those in a similar situation is invaluable. It provides much needed empathy, and the ritualistic nature of football participation provides the building blocks for a more stable existence.

Vulnerable individuals within this community often suffer from mental health issues due to the difficult situations they have gone through. Some of the most common mental disorders found among vulnerable asylum seekers are post-traumatic stress disorder (PTSD) and severe depression. According to psychiatric surveys, about 9% of adult refugees, and 11% of asylum children were diagnosed with PTSD, while 4% of refugees suffered from anxiety and 5% from major depression.

One of the major causes of these mental health disorders were proven to be difficulties in social integration and the lack of a sense of “belonging”. In fact, differences in resident status greatly impacted mental health rates: 54% of asylum seekers and 41.4% of refugees were accounted to be diagnosed with PTSD most frequently, while anxiety and depression were mostly reported by asylum seekers, and illegal migrants of 47.6%.

With a wave of refugees entering the European Union in 2015, EU governments specifically focused on developing statutory structures for housing, education, and employment. However, they neglected the importance of social integration in the process. Providing opportunities for these vulnerable groups to integrate themselves in new societies, in order to make them feel both at home and welcome has been overlooked. Thus, civil society organisations, such as voluntary grassroots initiatives like Football Unites, Racism Divides (FURD), have stepped in to help asylum seekers adjust to the new environment, providing specific services that newcomers can greatly benefit from.

Football acts as a remedy for many asylum seekers by helping to release the worries, fear and trauma they experience, as well as by facilitating the adjustment to new surroundings. As a result, it is vital that the government create opportunities for this community to participate in football.

FURD offer informal training sessions that include travel expenses, sporting equipment and a hot meal, allowing these vulnerable individuals to cultivate their passion, providing them with a sense of joy, fulfillment, and a goal that they can focus on and strive for. Moreover, in many post-migration cases, newcomers struggle with a lack of subsistence and frequently experience destitution. Food poverty is also an immensely pressing issue for this community, with many struggling to feed both themselves and their families. With this in mind, the services provided by grassroots initiatives such as FURD make a hugely positive difference.

While holding British citizenship is thought to provide a sense of belonging, one can still feel estranged in the country. In fact, there are plenty of people who are classed as British citizens, but who do not feel as though they belong within these borders. This is because integration is achieved through personal interactions, including activities that are undertaken with others, rather than through a set of laws. It is for this reason that is possible for asylum seekers to feel as though they belong in spite of the fact that they are ineligible for British citizenship. The uncertainty of their immigration status is just another of the many issues faced; belonging comes from routine, sociality and empowerment, all of which football participation has the power to create.

Football Creates a Sense of Belonging

The work of charitable, grassroots initiatives plays a major role in achieving this feeling for asylum seekers. Without them, the opportunities for the most vulnerable to participate in football would be scarce. Such training sessions give asylum seekers something to look forward to and build their week around. As a Congolese asylum seeker puts it, sport “breaks up the misery you feel at that particular time”.

The greatest football players in history all had one thing in common prior to their success – they all had a dream, a passion and a focus. They saw the sport as an outlet for their day-to-day stresses and something they were striving to be the best at. In addition, having the opportunity to play, develop and prosper ultimately allowed them to reach their goals. We all have our personal passions and goals that foster a sense of belonging and emotional relief within us, and asylum seekers should be given the same opportunities to fulfill them.

Football can break down even the most deep-rooted differences between people. It allows a shared identity and a sense of unity to be created. If all it takes is creating opportunities for asylum seekers to participate in teams and sessions, then it is vital that everything possible is done to support the work of grassroots initiatives such as FURD. It is their work that helps this vulnerable community to feel at home in new surroundings, and to forge a new life for themselves in spite of the major obstacles they face.

Pia Subramaniam is a content writer for the Immigration Advice Service, an organisation of immigration solicitors that help undocumented migrants to regulate their status.