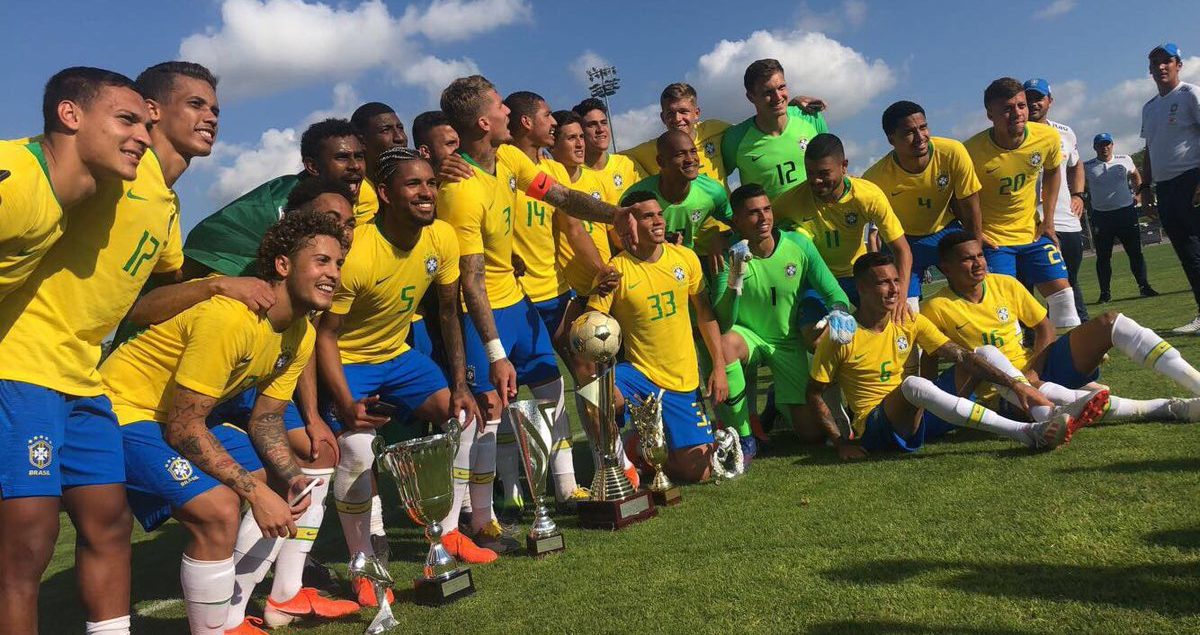 Over the first two weeks of June, I had the unique privilege of covering the Toulon Tournament, one of the most prestigious youth tournaments in football.

What brought me to this opportunity was somewhat fortuitous—and also a bit of Déjà vu. A few months ago, on a random college night, my mind went searching for the “best XIs” of several youth tournaments. In other words, I looked at the squad lists from several tournaments, from the 2011 U-17 Sudamericano to the 2016 U-19 Euros, for example, and composed “best XIs,” looking at which of those youngsters who competed in the tournament ended up becoming the real deal. It was hardcore football nerd-ery, but it’s what I do.

More than a few of those “best XIs” pertained to the Toulon Tournament. I scrolled through the players who competed in each tournament, and then composed an XI, just to satiate my whimsical desire for whatever it was I was trying to achieve. And so, just as Thomas Anderson had followed me and messaged me about creating the website that would go on to become BreakingTheLines.com after he saw a few of my Twitter threads, the official Twitter account of the Toulon Tournament—managed by my good friend Matt Lauricella—followed me and invited me to cover this summer’s tournament, after noticing my XIs.

I was immediately struck with the anticipation and intrigue. I knew that this summer was going to be chalk-full of football, from the U-20 World Cup, to the Women’s World Cup, to Copa América to the African Cup of Nations. I knew that while most people would be following those aforementioned tournaments, not too many would be passionately following this one. This dearth of coverage factored into my decision to go to France.

As a journalist, I’ve always seen it as my duty to report the stories that not only matter, but that aren’t being covered enough. I’ve always enjoyed watching the Toulon Tournament on TV, but I’ve never really seen much in the way of written analysis. I wanted to deliver exclusive and in-depth coverage of a tournament that was important to me, and that was likely going to be clouded out by a perfect storm of international competitions.

I’ve had the privilege of attending the 2018 FIFA World Cup and the 2016 Copa América, but neither of those come close to my experience in France this month. It wasn’t just standing in the mixed zone, waiting for players to arrive, or hassling the players or media officers for interviews, or proudly wearing my press credentials. It was the responsibility that came with it. The responsibility of delivering high-quality, on-the-scenes coverage.

None of these prospects, apart from perhaps Reece James, were well-known in the broader footballing circles. These were players who were looking to impress the scouts in the stands, but who were also looking to test themselves against international competition at a pivotal time in their career.

Some of them, like the U-18 French team, were still waiting in the wings at their respective academies, climbing up the ladder and polishing their skills. Others, like the comparatively older Irish team, were reaching the end of their time at the youth level, and were playing for a shot at first-team action, be it at their current club or elsewhere.

On my penultimate day in Marseille, I spoke with an Irish couple that had gone on a cruise across the Mediterranean. The husband spoke to me with excitement about several Irish prospects in Toulon such as Aaron Connolly and Lee O’Connor, while also reserving the same nervous caution that my Irish followers transmitted to me: as exciting as this crop of talent is, if they don’t get consistent first-team action soon, they’ll just be another wasted generation.

In the end, Brazil, my picks from day one, won the tournament. They had so much talent that the likes of Paulinho and Matheus Cunha, two big-money signings who will be playing Champions League football next season, weren’t even starters until the last three games. But as much as André Jardine’s side proved they deserved to win it, the other competitors showed that the playing field is becoming a lot more even than we previously thought.

On the opening day, Japan outplayed and outfought an England side that had won the past three editions of the Tournament, capping it off with a deserved 2-1 victory. Then, they destroyed Chile, who had proven formidable against Portugal, winning 7-0 and producing the finest team performance of the tournament. After going behind twice, they came back twice to force penalties against Mexico, before knocking them out in the semifinals. And when it seemed as though this Brazil team would have a cakewalk in the final, Japan were just as good and forced penalties again.

One of my favorite elements of this tournament was its diversity. Each of the four semifinalists—Ireland, Mexico, Japan, Brazil—belonged to a different continent. Two Asian goalkeepers—Qatar’s Meshaal Barsham and China’s Wei Chen—impressed me the most in goal, and Chen was selected as the Best Goalkeeper in the tournament. While no African teams competed, several players, such as Ireland’s Adam Idah and Japan’s Obi Powell Obinna (both half-Nigerian) could potentially switch over to an African side at senior level.

As much as I love watching professional football, there’s something different and more unique about youth tournaments. There isn’t the looming threat of a European Super League, and there aren’t obscene instances of inequality where the same teams win every time. In the semifinals of this summer’s U-20 World Cup, we saw Ukraine, Ecuador, and South Korea, three sides who aren’t exactly considered footballing powerhouses, as well as Italy, who didn’t even qualify for last year’s World Cup.

Youth tournaments give us a moment of clarity that we aren’t afforded at the senior level—they hold a microscope to the importance of privilege. Throughout the U-20 World Cup, I was blown away by how unheralded upstarts such as Amadou Sagna and Sékou Koita made players widely regarded as ‘the best prospects in Europe,’ such as Cucho Hernández and João ‘Jota’ Filipe, look like average talents. Don’t get me wrong—Cucho and Jota are still great prospects—but it gives you an idea of how smaller the gap in talent is than we think it is. Moreover, it makes you wonder just how many elite-level talents we are overlooking, simply because they haven’t developed in a world-class facility such as Benfica’s or Ajax’s.

Youth tournaments like Toulon expose you to that reality—they rip up a narrative was once commonly believed. Japan isn’t considered a footballing powerhouse, and they aren’t considered to have as passionate a fan base as Brazil. But when Saturday came, they were just as good as the Selecão, and their fans never stopped cheering, banging the drum, and chanting.

Football is becoming more competitive than ever. So many countries, like Japan, have experienced a ‘footballing revolution’ in the past few years, with the developmental system being overhauled, and with both their men’s and women’s programs reaching breathtaking new heights. As training, medical preparation, and footballing programs in general become more innovative, more countries are churning out golden prospects. And yet, with wealth becoming more and more clustered at the top of football’s food chain, this may just prove a tricky paradox.

Just as this tournament was a coming-of-age experience for so many players, it was also a coming-of-age experience for me as a journalist. To be able to speak with four Irish players, three Brazilian players, and three Mexican players, it’s pretty damn incredible. We often think of footballers are mere commodities, but we so often overlook the human angle. Whether they’ve just been signed by Barcelona, or set to be released by their current club, at the end of the day, they’re still young men who are looking to find their path in life.

When you’re young, you think you’re pretty much invincible. That isn’t the case. There will be plenty of hard falls and blows. It’s about whether you get up after—or stay down.

I thought I could do the impossible on the final day—but I couldn’t. Midway through my interview with Sebastián Jurado, my photo storage filled up. I tried to clear space, but I had to resort to taking videos and photos on my Snapchat—both for Breaking The Lines and for my collaborative project for Where Is Football–even the celebrations that I filmed up close on the pitch. You’ve got to think on your feet sometimes.

It was a ticking time bomb though. I didn’t expect it to go to penalties, but it did, and I had a train to catch back to Marseille before my train to Nice. I was cutting it close. In the midst of celebrations, I asked the tournament’s Best Player—Douglas Luiz—for an interview, and with my train departure approaching, he kindly obliged. Then, right after the interview ended, I sprinted up to the top row of the stadium, where my suitcase and backpack were, carried both down the stairs, and then sprinted with my luggage in tow from the stadium to the train station in the blistering heat. If you thought journalism was an exercise-less profession, you’re sorely mistaken.

I arrived at the station right when the train was arriving. I plumped down onto my seat, and let out a deep sigh of relief. Then, the ugly truth appeared right in front of my eyes.

I opened my Snapchat, and went to the saved videos. I realized that, when I had quickly started a new Snapchat video after the time limit (30 seconds) of the first part of the interview expired, I didn’t save what I had filmed before starting a new video. Technology, huh. Two steps forward, three steps back.

Unlike others, Douglas Luiz has not had the privilege of being allowed to play for his parent club, simply because the English Football Association has not granted him a work permit. He didn’t have the privilege of being born in England, and he also didn’t have the privilege of playing for a country with a less competitive national team, which would have allowed him to participate in a sufficient amount of international matches. Without a work permit, Douglas Luiz has been sent on loan twice to Girona, despite being highly rated by perhaps the greatest manager in football, Pep Guardiola.

Since leaving his home club of Vasco da Gama, Douglas Luiz has struggled for consistent playing time despite his immense talent. This season, Girona were relegated, throwing a curve ball in his efforts to become a Brazil regular and acquire a work permit. So you can imagine the emotion on his face when he lifted the Toulon Tournament trophy, after captaining his side to a hard-fought championship. Moments like this are what aspiring footballers all across the world dream about.

I didn’t get to listen to most of my conversation with Douglas Luiz, who spoke about his difficult season at Girona, or his leadership and mentality. But I did record about nine seconds in total of the interview, pertaining to my question about the difference between Brazil and Spain. Here is what he said.

“In Brazil, we have more space to play in, but in Spain, the game is more dynamic. I struggled at first, but now, I’ve adapted to it.”