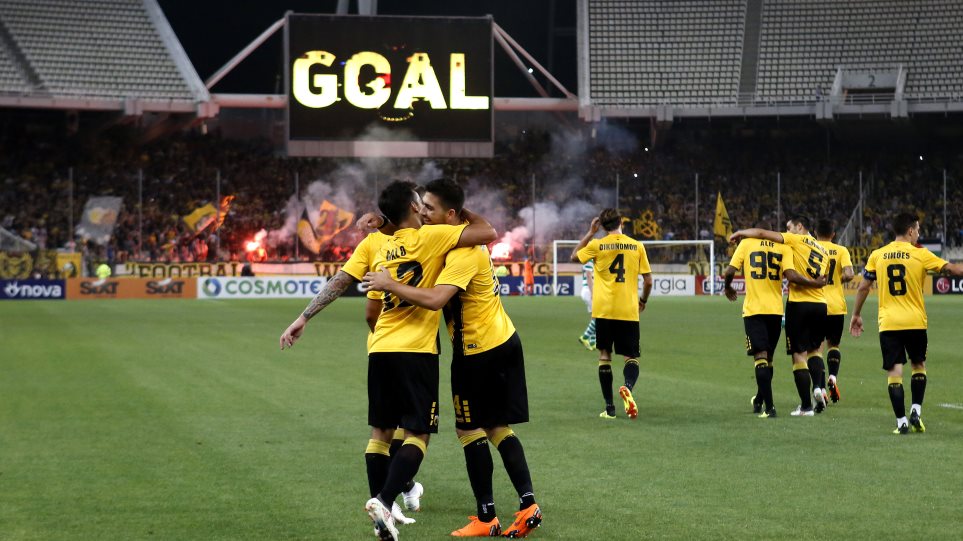 It’s been 12 years since AEK Athens’s last appearance in the Champions League. The Greek Champions have managed to beat Hungarian side Vidi and have now completed what certainly looks like a Football Manager save meets reality.

Flash back 6 years ago. AEK is dealing with serious financial struggles. The team is banned from signing players over the age of 21, whilst the board is nowhere to be seen, just like the players’ wages in the bank accounts. News breaks out reporting that the teenage academy players – turned into starters – have no money at all, struggling to feed themselves, struggling to pay their rents. The fiasco finally comes to an end with AEK getting relegated for the first time in the team’s history. The new board decides to restart the team from the 3rd division in order to delete a great part of its debt. And so begins AEK’s lonely road to greatness.

After back-to-back promotions, AEK returned to the first division. The fans, the new owner that helped with the financial restart, the players, literally everyone connected with the team was eyeing only one thing: the Super League title. In the first season back with the “big boys,” the team managed to win the Greek Cup, beating Greek giants Olympiacos. That was the first of the three consecutive cup final appearances. After some ups and downs, constant manager and roster changes, the scene was set for the 2017/18 season.

In the 2017/18 season, Salonika side PAOK and the AEK dueled to the very end for the league title, in an unforgettable contest for domestic supremacy. The two teams were neck and neck for the whole season, until hell broke out after a controversial goal was disallowed in the last derby of the season between these two; PAOK owner Ivan Savidis, stormed in to the pitch with a gun visibly attached to his belt. With AEK already 2 points ahead, and PAOK being penalized for the actions of Mr. Savidis, the title was sealed in the Athenians’ favor. After 24 years, AEK sits at the lonely top of the champions mountain.

AEK managed to quench their fans’ thirst for domestic glory by boasting one of the best defenses in world football. They conceded just 12 goals in 30 matches in the league and in the whole of last season they faced just 3 shots per game. That is less than what Juventus, Bayern Munich and Manchester City faced in their respectable leagues! Under manager Manolo Jiménez, the Athenian team played offensive football with a 4-2-3-1 system or defensively with a 3-5-2 one, and throughout the season, were incredibly efficient. Had there been no changes in the summer, AEK would be a Cinderella story waiting to happen, but unfortunately, that is not how the story unraveled. The team’s most valuable player, Lazaros Christodoulopoulos, left for Olympiacos. The team’s second top scorer, Sergio Araujo, returned to Las Palmas after his loan spell expired. The team’s best defender, Ognjen Vranjes, moved to Anderlecht. Finally, the main person behind the team building process, manager Manolo Jimenez, accepted a move back to his country with Las Palmas. Adding to the misery, the team’s leader, Marko Livaja (recently called to the Croatia national team- he also started the game against Portugal), lost his head after the home game against Vidi. He kicked Vidi striker Danko Lazović, and is now on serving 4 game ban from European competition. To sum it up, everything that could have gone wrong for AEK this past summer did go wrong.

Notwithstanding, the new transfers have matched perfectly with how new manager Marinos Ouzounidis wants his team to perform. The roster is balanced, yet certainly lacking in the excitement that helped the team achieve last season’s highs, like staying unbeaten in Europe, drawing twice against Milan, and winning the league in style. One thing is for sure, though: when AEK plays, the capital of Greece lights up. The fans will give you a great taste of what it means for them, to watch the team they love in the Europe’s foremost competition.